December 8, 2022, 8:00 AM · Despicable Me fans who have wanted to attend a real-life Villain-Con will get their chance next year at Universal Orlando. The resort this morning officially announced the new Minions attraction coming to Universal Studios Florida - Illumination's Villain-Con Minion Blast.

The interactive attraction will open next summer in the space near the front of the park formerly occupied by Shrek 4-D and originally housing the Alfred Hitchcock: Art of Making Movies experience. [If you're into theme park history, here's one of my stories about the old Hitchcock show: Theme park cast member stories: Picking the audience volunteers.]

The 2015 "Minions" movie introduced the Orlando Villain-Con to Despicable Me canon, where Kevin, Stuart, and Bob met Scarlet Overkill in that Despicable Me prequel. Universal Studios Florida's new attraction will place visitors on a "motion-based pathway" at Villain-Con in a competition to find the next member of The Vicious 6 - the villain supergroup from this year's "Minions: The Rise of Gru." 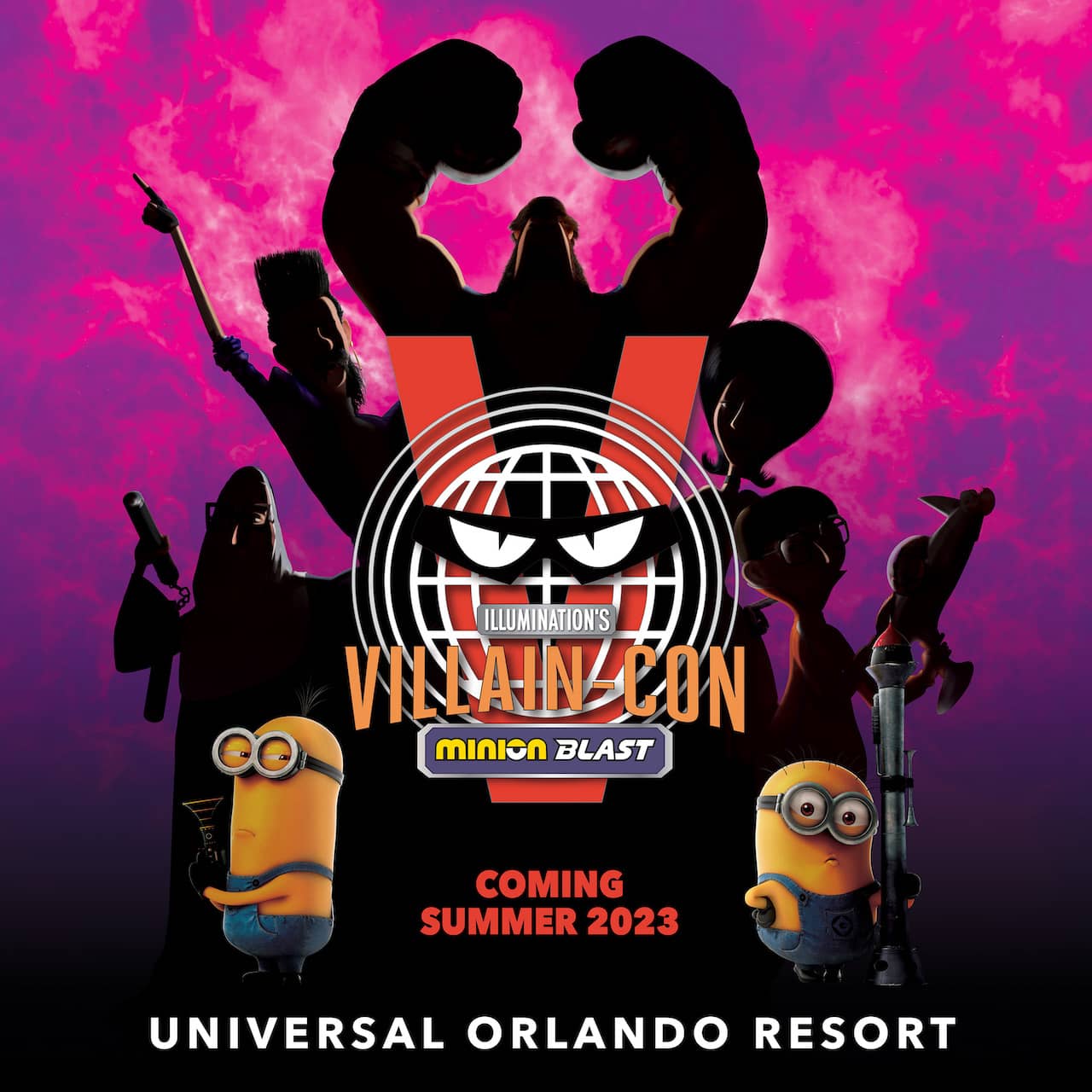 Villain-Con Minion Blast will join Despicable Me Minion Mayhem and the Minion Café that will replace the Universal Monsters Cafe to form the new Minion Land on Illumination Ave. area next summer in Universal Studios Florida.

I love this concept! That said, this is such a strange fit for the entrance to their flagship park in Orlando. I know they are doing what they can with the space they have, but it’s rough place making.

What a surprise! I love that nearly every Universal attraction gets announced so late when everyone that pays attention to the industry already knows what it is. Still better then announcing an attraction 10 years in advance though...cough cough Disney!

Sounds like fun. The Minions films have been silly, over-the-top and fun for the whole family and this should be very popular.
It still blows my mind how quickly Universal is able to build and open these attractions as opposed to the Mouse next door. It will be what, 5 years since announcement of the PatF redo of Splash Mountain til it opens? 6 years now for Tron?
My wife and I had an experience from a visit to Orlando during the time frame where New Fantasyland and Diagon Alley were both being built. At the MK, as storm clouds were quickly approaching we saw construction workers lounging around on their backs atop the future Mine Train coaster. They could have been working knowing a huge storm was coming in but decided then when they COULD work, not to.
Meanwhile, 2 days later at Universal, we saw a whole section of Diagon Alley facade go from non painted to fully painted with detail and flourishes only waiting for set dressing to be added. We were impressed and ran into a group of park executives who were inspecting that area at the time. We told them how much we were looking forward to the expansion and would be back to see it done. We also shared the MK story with them, they laughed and one said “ We try harder”.
Pretty much summed it up.

This sounds like a winner for sure! Also sounds a lot like MIB: Alien Attack. Which leads me to theorize... could MIB, be the next attraction to go? Minions would make it expendable and we know Universal isn't afraid to pull the trigger on old attractions. Just food for thought.

But yeah Minions have been around for 12 years and are still entertaining folks. Looking forward to checking this out!

Think about the amazing leadership stability that Universal has had for its theme park division over the years. Tom Williams ran it for decades before retiring and turning it over to Mark Woodbury this year. And Mark came up through Universal Creative, where he was the long-time head.

I can’t imagine the head of WDI ever taking over Disney Parks. Then again, I can’t imagine anyone staying at the top of DPEP for two decades, either. That stability, or lack of it, makes a difference.

What happened to the days when you could just enjoy an experience without having to to "shoot" at something? Entertainment without effort. It's vacation dang it!

I'm really curious how well this one will work. A moving walkway rather than a proper ride vehicle is certainly more cost effective, but it might be hard to get people to stand still and ride through rather than trying to remain in place to get a specific target. They've also got to make sure nobody goes too crazy with aiming and falls over. It's a novel idea, but seems questionable in execution.

Will I be sprayed in the face with water at some point? It’s not a true Universal dark ride unless I am.

@NCPete-
If the only contingent to a water ride is that you get water sprayed on you, then over half of UO's rides would be water rides lol

RN: "Think about the amazing leadership stability that Universal has had for its theme park division over the years."

@sarah I'm with you. Plus, shooter rides are effectively all the same. I see it as a cop out, when not sure what to do, another shooter!

Exactly what I was thinking. MIB is a great attraction but not a great IP. Im sure its days are numbered as Universal converts it's studio parks into theme parks.

They could update the MIB ride so Will Smith's character slaps everyone as they pass by.

I'm not sure about this attraction since a lot of the descriptions here are rather vague and generic. This could be off the charts cool and using the Despicable Me/Minions franchise combined with interactive elements will undoubtedly appeal to the younger tech-savvy generation. It's hard to glean what this experience will be like from this press release, so until some more details are revealed, I think it's difficult to evaluate how good or bad this attraction will be.

I do find it interesting that rumors had this pegged as a Despicable Me/Minions "walk-through" attraction for months, but instead of actually providing some specific details of what the experience will be, Universal essentially just confirmed the general rumors. At least when Disney makes an official attraction announcement like this, they put everything out there save for spoiler-y aspects.