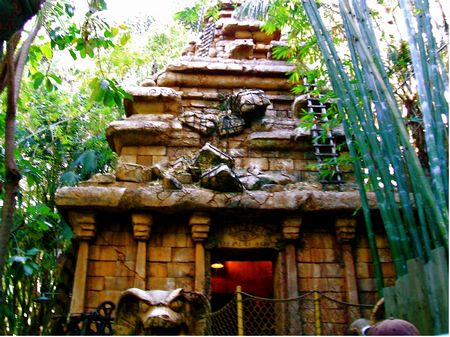 From the TPI reader reviews: "Indiana Jones Adventure is a perfect example of movie re-formatting. The detail is excellent and the effects are very intense thus many children easily get scared in the ride. A must-see attraction in Disneyland, go early in the morning or one hour before the park closes." (Adriel Tjokrosaputro) 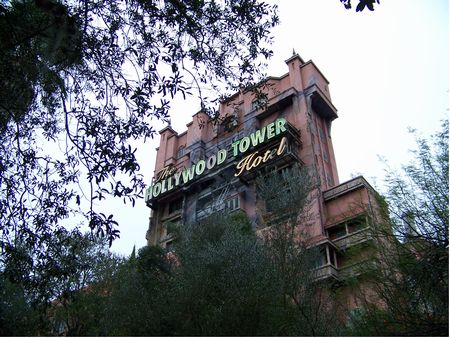 From the TPI reader reviews: "A perfect example of what Disney does best: take a standard amusement park idea (in this case, a "freefall" style ride) and turn it into a creative tour de force. Simply the best themed attraction at DisneyWorld and one of the most thrilling and unique rides I have ever had the pleasure to experience." (James Rao)

Have at it in the comments.

Julia Xia
April 4, 2008 at 9:42 PM · I think this is going to be a tight contest but I'm going with Indy. ToT is a fantastic reinvention of the tired drop ride, but Indy, though not perfect, is a fantastic adventure dark ride in a great milieu, with an excellent storyline and even an awesome queue. Here's hoping Disney shows it some love in the lead up to the next movie.

Eric Malone
April 4, 2008 at 10:16 PM · Personally, I've never gone on the Indy ride (as much as I want to), because I've never been to Disneyland - only Disney World - and so I simply voted for the ride I'd actually been on: Tower of Terror.

Great themeing, great detail. I never really considered it just a rehash of a ride that's done in theme parks all over the world. They do THAT good of a job.

So, ToT earned my vote.

Robert - I know you didn't vote in the last contest, but how 'bout this one? What's your pick?

Sylvain Comeau
April 5, 2008 at 2:03 AM · I voted for Indy, but this was a close one and a tough choice. Both rides are knockouts; both are bases loaded home runs for Disney. TOT is one of my favorite rides in all of Disney World, but Indy may be my favorite at Disneyland. Indy takes it for the variety of the experiences and effects, but I hated to vote against my beloved Tower...

The last contest is going to be interesting. Naturally, this site seems to love Spidey, but if the Disney-philes show up...

I find the love for Spidey reminds me of the Oscars ... as soon as a select amount of critics say, "this is the best film of the year," or "this is going to the Oscars," the whole world seems to jump in and agree. As soon as Spidey took best attraction and went on a streak, it garnered even more and more support.

Mostly Anonymous
April 5, 2008 at 4:19 PM · This surprises me as much as yesterday - and I suspect the answer may lie with Eric's post above. If someone has only ridden one of the two rides, they vote for the ride they've ridden.

So rides from the smaller, less attended parks didn't have a chance. And Orlando will beat Anaheim.

Julia Xia
April 5, 2008 at 11:00 PM · Shocked it wasn't even close. I still think IJ is a better ride but ToT is certainly worthy. Spidey is going to win in a blow out. Disney-philes already showed up for Pirates and it still lost badly to Spidey... and Pirates is probably more popular than ToT.