Can X2 succeed where X failed?

May 13, 2008, 6:10 PM · Longtime Theme Park Insider readers might be familiar with the saga of X, Six Flags Magic Mountain's revolutionary, but ultimately flawed, "4-D' roller coaster, which debuted in 2002. The Arrow Dynamics design drew good reviews [check the byline, then click the video link to the right], but could not keep up with the hype. Literally. Trains broke down, Six Flags cut capacity by running just one train at a time, then, eventually threw in the towel.

But not before Arrow ended up in bankruptcy, Six Flags ended up the target of a shareholder revolt and Magic Mountain lost its crown as the nation's coaster capital, as its already shaky reputation for customer service tanked.

Next week, X will be reborn... as X2. The track will be the same, but the trains radically different. Six Flags will have added new on-ride effects and a new park management teams is counting on a three-train operation and improved customer service throughout the park to help X2 win customers back to Magic Mountain.

Last Thursday, park president Jay Thomas and general manager Tim Burkhart showed me the newly installed third train on the X2 track, and explained how this will be a very different X. 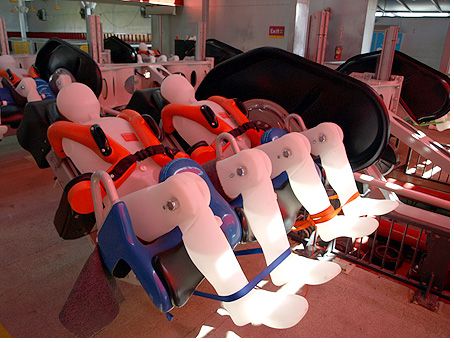 "We inspected the entire track and there were no problems," Burkhart said. "The track was really well done. The problem [with X] always was the vehicles."

Burkhart showed me where engineers had used a computer analysis called "finite element analysis" to identify ways that they could cut weight and redesign train elements to improve the ride's reliability. 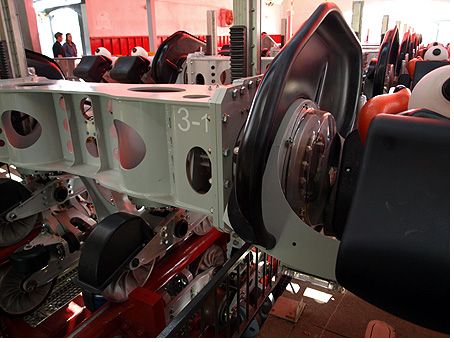 Cut-outs now dot the metal on the train frame. The "pickle fork" attaching each train arm to the central unit is now a "pickle spoon," Burkhart said. There's a new wheel design, one that's lighter, stronger and the improves airflow, allowing it to run much smoother.

"We've been testing the trains and haven't had to replace a wheel. On X our first summer, we were replacing 18-20 wheels a day," he said.

The new wheel performance means a much smoother ride, said Burkhart, who has ridden the new X2 "hundreds" of times during testing.

Coaster fans also anticipate the new ride elements on X2. Six Flags will immerse the underground section at the bottom of the initial drop withy fog, creating a vortex effect as trains pass through during the day. After the second raven turn, flames will shoot at the passing trains, an effect that Magic Mountain execs say will be especially impressive at night. To cool riders after the flame effect, misters will blow on the trains on the block brake before the unload station. [Ride sensors will shut down the flame effect during high wind and gusts, however. That decision will be made by the ride's computer on a train-by-train basis.]

Most impressive, executives say, will be an on-ride audio system that "makes the one on [Disney's] California Screamin' sound like AM radio," Burkhart said.

So, can X2 succeed where X failed? We will soon find out. The press gets its look at X2 on May 22, and the public two days later.

Deidre Dennis
May 14, 2008 at 9:32 AM · I agree. When we visited last year, the wait wasn't long and there were absolutely no problems riding this attraction. I don't know, maybe I happened to hit the park on a good day but I haven't experienced the bad things on this attraction or any other at this park that some folks seem to have experienced.

Still, this X2 definitely sounds promising. It's funny that the vehicles are often the problems in operations. For example, Test Track's cars to this day still experience problems more frequently than they should, and the Minis at Lights, Motors, Action! destroy their tires daily. Both rides were given custom tires to save time and money.

Mike West
May 15, 2008 at 9:02 AM · With X's First Debut, me & certain other enthusiasts thought we'd found our match. Each time I rode I swore never again. Though from that first season to the second, they'd alredy made improvements to take out some vibration that your shoulders just aren't used to handling once your weight is on them. then last year I'd finally been broken in enough to keep riding repeat, front seat, last seat, front seat, last seat. Unfortunately, while logic would say you build ride experience from coaster-light to X being at the end of the day, the way it was before DEMANDED you ride it first thing or else waste your day in line in the hottest part of the park! 3 trains, & dare I say it Front of the line priveledges(again MM is the ONLY park I know who makes that priveledge available on NEWEST coasters as well as the older ones). Though I am a little afraid that lighter means faster, & I don't know if I can handle any more G forces on that ride. Flames, I don't think this is a good element in the already hot valley. But history tells us that those kinds of elements are quickly shut down by fire marshals, or energy usage, or maintenance issues anyway. (Remember how Indiana Jones was forced to be altered(and diminished) after the initial opening once inspected by the Fire marshal?).
And BTW, Disney's sound system already sounds like an AM radio, so I'm really looking forward to that promise! Glad Santa Brought us 6F season passes this year!

Derek Potter
May 15, 2008 at 10:34 AM · If it improves the rides maintenance requirements (ie changing wheels and such), than it's a good thing, although some of those cost savings will be offset by maintaining all of the other new things. The cost of the lighting, fire, mist...etc won't be small, but at least they are contributing to the ride rather than repairing it all the time. Sound systems don't behave themselves too well in an outdoor venue on a loud ride with fire and mist. Hopefully the speakers and amps will hold out. They should have taken the Hard Rock Park route and filled the supports with sand, reducing track noise and allowing the sound system to be heard a little better.

Disney's on ride sounds like an AM radio because with the wind and track noise, the only frequencies that really cut through are the hi-mids, which is what are prevalent in AM. The trick isn't just in the sound system, it's harnessing what other sounds one hears on the ride. A noise cancelling earphone system would be the trick, although that would be gross after a while with people sharing....unless they used the in-ear systems that are used by musicians on stage. They have removeable molds. Or they could install 1/8" headphone jacks and sell a pair of phones that would be safe to ride with. The headphone thing would need a solution that would satisfy safety (and health) requirements.

X2 will be an improvement... as long as they keep all of the bells and whistles operating properly.