September 10, 2012, 6:06 PM · Mondays this fall and winter on Theme Park Insider, we'll be focusing on some of the theme park industry's best attractions that don't always get the attention they deserve. Let's kick this off with Efteling's Fata Morgana. 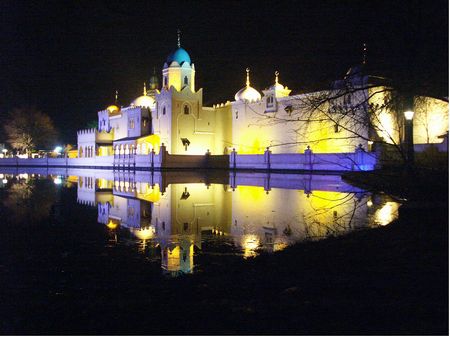 Now that I've visited the Tokyo Disney theme parks, Efteling in The Netherlands is the theme park I've not yet visited that I most want to see. One of the big reasons is Fata Morgana, an indoor boat ride that recreates scenes from 1,001 Arabian Nights.

I first heard of Fata Morgana from industry legend Bob Rogers, who asked me if I could name the three theme park rides without a happy ending. I got Mr. Toad's Wild Ride (we end up in Hell), and the original, pre-Johnny Depp Pirates of the Caribbean (where the pirates are about to blown to smithereens). But I couldn't name the third. And that's when Bob told me about Fata Morgana.

Fata Morgana opened in 1986, set in a Moroccan-style palace across a reflecting pool from the park's entrance. Once inside, you board via a turntable, which directs your boat into a jungle-like scene. From there, a wizard appears, who shows you the way into the forbidden Arabian city. Here's a video of the ride.

The key to appreciating this ride is to see yourself as the protagonist. You're wandering the marketplace in the forbidden city, a place where you don't belong. But you're caught, and taken away to a sentence of hard labor. Then the wizard reappears, and blasts your way out of the prison, into the harbor of the city where the king's barge awaits.

So do you hitch a ride out of the forbidden city, getting away to safety? Heck, no! The party's just starting. You sail on, into the palace, where you join the party in the king's harem. Not satisfied with the ladies, you press on, into the king's treasure room.

Hey, what's the big guy there? Why did everything go dark? Is that a big snake up ahead? Must not look into his eyes…

And the ride's over.

Confused? Let's think of the Fata Morgana this way: Remember the end of The Sopranos? How everything just went black? Well, like Tony Soprano, you just got whacked.

Hey, it's one thing to sneak into the king's city. Or his palace. Or even into his harem. But you most definitely do not get to mess with the king's cash. Touch the money, and you're gonna pay.

Even though I've never been there, this ride makes me love Efteling for just trying it. Not every theme park attraction needs to end on a sticky-sweet note. I love to see rides serve up a little darkness, now and then.

This seems like a really cool ride! But what happened to the fix this theme park series? You have kind of let that just end without going anywhere...

Very neat attraction with a considerably ambitious scope. It's easy to overlook all the interesting experiences at theme parks overseas.

I'm glad to see Efteling featured on this site. I'm a long time theme park insider fan but have been put out by the extra love given to Disney attractions. Over the past few years I've experienced several theme parks that seem to surpass Disney if not in quality than in theming (WWoHP being a standout at Universal). I actually visited Efteling this past fall and can safely say that it is one of the best themed parks (and most beautifully laid out overall) parks I have ever been to. Everything and I mean everything in that park is themed (the ATM machines are 10 ft tall treasure chests!). I hope that Robert will be able to visit this park in the near future, true the language barrier does take a bit away from the attractions and some of the older attractions have become a bit dated but there is no denying the quality and design that has gone into the park.

David, Fix the Park is coming back - I just got sidetracked with some additional research needed for a couple parks I want to feature.

Ok, glad it's coming back! And extra research typically means better, so I'm really looking forward to it.

While this attraction is indeed very nice, Droomvlucht (dream flight) is even better. It's a nice park and you was so close when you went to England and Paris, it would have been a easy stop.

You do remember Revenfe of the Mummy is Singapore ends in a bad way for riders? That makes 4 rides without happy endings.

This ride reminds me of the Sinbad ride at DisneySea. I found it weird that there wasn't even anybody in line for the ride. PS: I really appreciate your tributes to underrated attractions.

Tip of the week: How to stop your kids from whining over theme park souvenirs

Vote of the week: Decorating your Disney World hotel room?