With an infectiously upbeat soundtrack that includes riffs from the classic Main Street Electrical Parade theme "Baroque Hoedown," Paint the Night finally gives Disneyland a worthy successor to that iconic parade. Illuminated with modern LED technology and played at a brisk pace that never lets the momentum slow, Paint the Night won me over immediately and has me craving another opportunity to see it in person.

Finally, a shooter ride that would be a world-class dark ride even without the game play. Filled with a mix of great animatronics, 3D screens, and practical effects, experienced while riding a motion-base vehicle, Justice League doesn't quite match Universal's Amazing Adventure of Spider-Man for show quality, but it's in that neighborhood, which should thrill theme park fans as much as all those coasters for which Six Flags is usually known. Throw in the fun game play, and Justice League is a must-ride. Disney's new fireworks show defies recording. If you live life through a screen, Disneyland Forever will challenge you to put away that phone or tablet and take a moment to look around with your own eyes and be present in what might be the most immersive, large-scale multimedia production ever attempted in a theme park. Forget watching this in a YouTube video. You need to experience this show in person, and from multiple places within the park.

At this point, long-time Theme Park Insider readers likely know that I'm more a dark ride fan than roller coaster fan. But I love getting the chance to experience unique moments on coasters, and as the world's longest hybrid coaster and the first Iron Horse retrack in Southern California, Twisted Colossus offers plenty of those.

How is Thunderbird number six on this list? I loved that ride! But this just goes to show how deep and competitive this year's line-up of new attractions has been. America's first launched wing coaster is Holiday World's first all-steel coaster and a worthy tribute to the vision of former park president, the late Will Koch. This year's new coasters offer some great drops, but none as big as the one between numbers six and seven on this list. ;^) The latest edition of World of Color is a good show, honoring the history of Disneyland and the legacy of its founder, Walt Disney with a line-up of musical numbers hosted by Neil Patrick Harris and played on the show's iconic water screens. But this a good show that replaced a great show, and suffers by that comparison. Sure, I'd like to see it again, but I'd like to see the old World of Color return even more.

Now let's move on to the rides I haven't experienced yet. Give me a Star Trek transporter, and this is the order in which I go to see them:

My experience on Twisted Colossus made me want to go to Massachusetts to compare that ride to Wicked Cyclone in person. With its multiple inversions and airtime hills, Wicked Cyclone sounds like the type of wild ride that any coaster fan would enjoy. 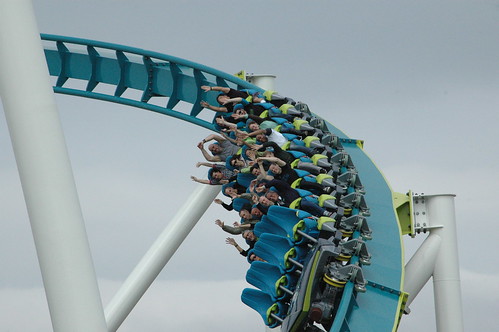 Okay, we're going back more than a month for the opening of Carowind's recording-setting Giga coaster, but I'm always up for a ride on a new Bolliger & Mabillard creation. 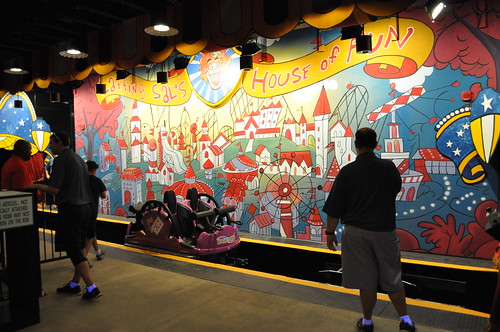 Spinning coasters aren't always my thing — I prefer my coasters to travel in a straight line, thank you — but Hersheypark's tribute to funhouses of the past appeals to the theme park geek in me. Cedar Point's conversion of the stand-up Mantis into a floorless coaster definitely merits a visit on my next trip to Cedar Point, but doesn't inspire me to make a special trip.

This Premier shuttle coaster won't overshadow Williamsburg's other coasters, but should provide some nice thrills for fans willing to endure the low capacity and resulting waits.

A relatively straight-forward loop-de-loop (well straight-forward, then back again!), El Diablo looks like a fun second-tier ride for thrill fans who've bagged the park's top attractions and looking for another experience to round out their day.

We're not done yet! Next month, Universal Studios Hollywood debuts its Fast & Furious - Supercharged encounter on the Studio Tour, a star-studded 4D experience that promises to challenge some of the top entries on this list.

What's been your favorite new attraction of the year, so far? And what are you most looking forward to riding?

James Rao
May 24, 2015 at 5:04 AM · Of all these great attractions, the only one I will probably experience this year is Thunderbird at Holiday World. So Robert, once again, thank you and your fleet of writers for providing such great coverage and in depth reviews for those of us who can't see and do every new attraction that hits the midway. I for one am very appreciative. The TPI community has been quite spoiled over the past few weeks to the point that I don't think we will ever come down from the high we're currently feeling. ;)

Without a doubt, 2015 has been a banner year, maybe unmatched in history... but looking into my crystal ball, I think there are more exciting things coming and these types of explosive summers are going to be the norm for a while!

Manny Barron
May 25, 2015 at 12:01 AM · Fast and Furious by far is what I'm looking forward to experiencing the most. Back in 2010 when I rode King Kong 360:3-D, that attraction blew away my expectations, its great and I think the new encounter will eclipse that and then some. Add in the fact that I'm a big fan of the movie franchise (along with millions of other people) and so yeah I'm hyped!

Christopher Sturniolo
May 27, 2015 at 12:06 PM · Shouldn't Harry Potter and the Escape from Gringotts be nominated because it opened after July 1?