The park did not reveal which three attractions will be part of the new land. Disney has Toy Story Lands at Hong Kong Disneyland and Walt Disney Studios in Paris, with a third land under construction at Disney's Hollywood Studios in Florida. The Walt Disney World version of the land will be substantially different than the original design of Toy Story Land from the Hong Kong and Paris parks, which include a parachute jump ride, a caterpillar, and shuttle roller coaster. Disney has not yet announced an opening date for the Orlando version.

"We couldn't be more pleased with Shanghai Disneyland’s first four months of operation and couldn’t be more excited about our future in mainland China," Chapek said in a statement released by the park. "We're demonstrating our confidence by breaking ground on a new Toy Story Land that will be both authentically Disney and distinctly Chinese, delighting our guests for years to come."

Update: Had to add this:

Keith Schneider
November 10, 2016 at 8:02 AM · Looking back at their original plans, the three attractions listed were Rex's Racers, Slinky Dog Spin and Woody's Roundup as well as a counter service restaurant named Toy Box Cafe. Though, the new plans may have changed, the layout on the Etch-A-Sketch in the background at the announcement looks very similar to the original plans, that is what can be seen without obstructions. 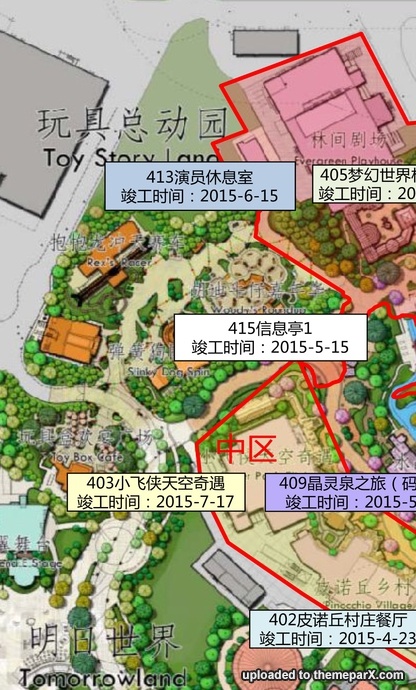 Jeffrey Britton
November 10, 2016 at 8:02 AM · Is this why we hear the budget for Toy Story Land at DHS is continually shrinking? Expansion of an already under performing park? #ThanksShanghai

Robert Niles
November 10, 2016 at 9:30 AM · Keith, the fact that they pulled TSL out of the opening phase and delayed it raised a flag for me that something *was* changing from those plans. That's why we pulled those rides from our "under construction" listings, and I'm waiting for some inside or official word before listing anything new in the Shanghai TSL.

Anon Mouse
November 10, 2016 at 11:14 AM · Very lame update just like Disney Hollywood Studios. Few attractions. Nothing notable. Not including Toy Story Mania is a huge oversight. They need to add an extra flat ride or two. Seems so boring and uninspired.

Gabriel Schroll
November 10, 2016 at 11:15 AM · I have no inside information, but if they're building a Toy Story Land in Orlando, wouldn't it make sense to clone the whole thing for Shanghai? I know..."distinctly Chinese" and all, but they'd save money and time by already having the plans drawn up and the R&D in the bag. I don't know about Shanghai's sea level compared to Orlando, but they could give us what we were hoping Orlando would have..with some Chinese distinctionism. *I made that word up*

I would be surprised if Shanghai's Toy Story Land is all that different from Orlando's ,since they're basically going to be built at the same time.

JK
November 10, 2016 at 12:10 PM · Toy story at Disney Hollywood studios has been ongoing for a few months now with land clearance of buildings ect.

MarkSharp
November 10, 2016 at 12:12 PM · Not surprising at all since it was planned. Isn't there even a building now next to Tomorrowland with Toy Story theme? I will at this park in about a week and half. Kind of excited but honestly I wish I was going to DisneySea. This addition doesn't excite me at all. I'm not a big fan of Toy Story or flat rides.

70.193.249.60
November 10, 2016 at 2:05 PM · Robert, I agree TSL pulled from the opening day lineup was a red flag. Thinking optimistically, everything at Shanghai is "plussed" so maybe Disney has something better up their sleeve. Though, maybe they are simply cloning DHS, or worst case scenario, they were purposely holding TSL back to present it as a "quick expansion plan" featuring underwhelming attractions meant to increase park capacity. I'm hoping for the best!

AJ Hummel
November 10, 2016 at 4:34 PM · From what I've been reading around the internet, it sounds like this land will not be a clone of the other lands. However, keep in mind that the site is only 4 acres, so there isn't much room to play with. Most reports say there will be two flat rides, a small shuttle coaster, a restaurant, and a meet and greet area. Don't expect Toy Story Midway Mania or the Slinky Dog coaster. Reportedly the ground work for this area is already complete, but for some reason Disney determined it wouldn't be ready for opening and therefore stopped work and decided to make it the first addition to the park in 2018.

Gabriel Schroll
November 11, 2016 at 10:28 AM · Why would Disney want to protect Toy Story Land in Hong Kong? Is that supposed to be some kind of huge draw for crowds? I still like walking through it. It's kind of fun to look at, but there's nothing in the land that makes me stop for more than 10 seconds to take a photo.

I can see protecting Mystic Point or Grizzly Gulch for a period of time, because those are both fantastic! And exclusive.

I'm not saying it's not true. I just think it makes very little sense to protect the worst of the three recent expansions at HKDL.

4 acres, huh? Gosh, they really should have just built a Toy Story Mania inside a Pixar Place. Clone Hollywood Studios' old "mini land". That'd have worked for me, and would have been better than whatever they end up doing.

First taste of Disney California Adventure's Festival of the Holidays