Developed with the working name "Lotte's Magic Forest," the new park will include six nature-themed lands and more than a dozen family attractions in its first phase, anchored by two roller coaster experiences, according to a press release issued by the park's creative team at California's Legacy | GGE. The park's first phase will open sometime in mid-2021 and occupy about 25 acres. (For comparison, that's about half the size of Universal Studios Singapore, the smallest of the Disney/Universal theme parks.)

"Our guiding concept here was to create Asia's first European-style theme park, and to immerse guests in the charm and wonder of a magical garden environment," Marcus King, Legacy | GGE's Senior Director of Project Management said.

By "European-style" theme park, I infer that they mean something along the lines of Tivoli Gardens or Efteling, as opposed to the more American-style, ride-driven parks one can find throughout Korea, Japan, and China. But whatever stylistic difference might have existed between European and American theme parks seems to be disappearing as parks around the world all draw upon common creative teams and vendors to produce their new attractions, so I don't know how useful that designation will be in describing this new park.

Indeed, a look at the concept art provided by Legacy | GGE displays some attractions that appear very familiar to American and Asian theme park fans, including what looks like a Star Flyer swing ride, a launch roller coaster, and a very Disney looking castle. There's even a Monstro-like whale on what looks to be a small boat ride, a la Disneyland's Storybook Land. But the centerpiece of the park is a nod to Europe's Efteling, with a dead ringer for the talking Fairytale Tree in that park's Fairytale Forest. 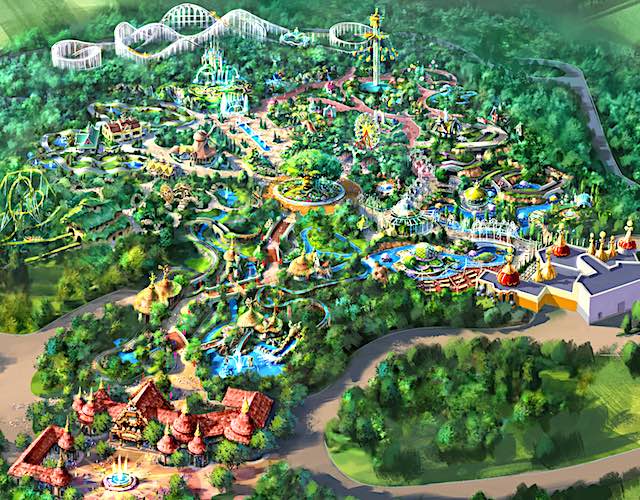 Lotte World, in Seoul, is the sixth most-visited theme park in Asia and 16th in the world, according to the most recent TEA/AECOM Theme Index global attendance report. It trails China's Chimelong Ocean Kingdom as the second-largest non-Disney, non-Universal theme park in the world, drawing nearly seven million visitors last year — though that was down significantly from its attendance in 2016. Lotte Group is one of South Korea's largest business conglomerates, owning movie theaters, hotels, and food, shopping, finance and construction-related businesses, in addition to theme parks.

Busan is South Korea's second-biggest city, after the capital of Seoul. Lotte's Magic Forest' will be located in the city's Osiria district, next to Lotte Group's existing East Busan Lotte Outlet Complex. Site prep work is planned to begin this summer, with construction following early next year.

I think the Goddard group, I mean Legacy, went around the world and patchworked the hell out of this thing. I can even see a tree of life in the center of the park. Is it original, nope. But why can the nice people in South Korea enjoy the nice things we haven in their home country?
In the end I think it would be better (like Disneyland and Efteling) to look at your own culture and develop something that is not only a ton of fun but also cultural relevant.

I will certainly take a "Train to Busan". Don't talk about "dead ringer".

"... But whatever stylistic difference might have existed between European and American theme parks seems to be disappearing as parks around the world all draw upon common creative teams and vendors to produce their new attractions, so I don't know how useful that designation will be in describing this new park. ..."

Interesting statement, but :
Does it ?
Let me list some of the major European "real" theme parks which for sure do have their very own in-park design-&-development department:
- Tivoli (DK)
- Efteling (NL)
- Europa Park (DE)
- Puy du Fou (FR)
- Pairi Daiza (BE)
- Plopsaland (BE)
- Toverland (NL)
- Futuroscope (FR)
... etc

Of course, all see what's happening with the neighbours, but the statement about "..common creative teams and vendors to produce their new attractions.." will prove to be still about USA-&-Asia-&-Dubai... , not Europe !

Even 100% Brittish Merlin, as an entertainment group, does have it's very own and independent D&D department (Merlin studios in London)

Tree of Life actually is the wrong copy-paste reference, that tree in the middle of the rendering clearly is a conceptual copy of 'Sprookjesboom' (Not Disney Animal Kingdom but Efteling) There allready exist several (very bad) copies of it, in Asia...
The original :
http://hw-fotografie.eu/wp-content/uploads/2017/04/Sprookjesboom-1.jpg
More, it is Efteling IP-material, as based on their own TV-program + feature film, gaming and stage musical ..for the smallest kids.
https://1645110239.rsc.cdn77.org/image/x1200x800/q80/mm/benl/movies11038/posters/sprookjesboom-de-film.jpg

IP-right abuse is paramount even with the so called 'reputed-independent' design groups... like this Legacy | GGE !!!!
(I met concept theft myself already 2 times, one of which was removed from the product overview web page of the company which abused my concept, shortly after I confronted them personally with the facts... it's VERY common in this business...)

I see like half a dozen more little IP-thefts on the same rendering, proving that Legacy | GGE is mastering patchwork, not original creativity.
More, none of the rides I see is anything different from off the shelf non storytelling products.

Disney confirms the location of its new Star Wars hotel