All aboard the 2019 Hype Train for Disney World's Mickey ride

December 26, 2018, 1:40 PM · Continuing our look at 10 anticipated new attractions in 2019, we head to Walt Disney World for a ground-breaking attraction at Disney's Hollywood Studios.

No, not that. (Patience, young padawans....) Today, we are getting ready for Disney's first-ever theme park ride themed to its original icon, Mickey and Minnie's Runaway Railway.

Mickey and Minnie's Runaway Railway is going into the Chinese Theater in the center of the park, which formerly housed The Great Movie Ride. Taking its inspiration from the Paul Rudish/Joseph Holt series now running on The Disney Channel and Disney.com, the ride will follow Mickey and Minnie as they head out into the countryside for a picnic.

So how will we follow Mick and Min? In a train driven by Goofy! What could possibly go wrong with that? 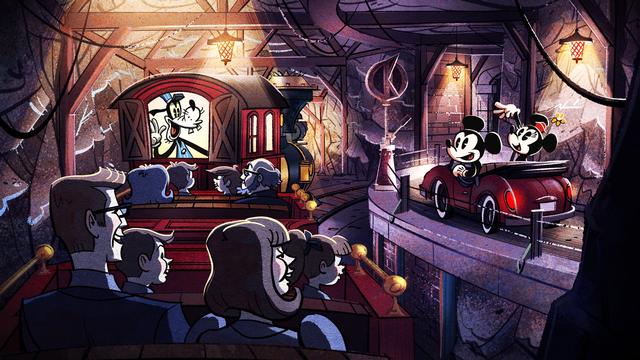 Plenty, of course. The misadventures on our "Runaway Railway" will include [spoiler alert] a stampede, and scenes entitled "Carnival Chaos," "Tropical Torrent," and "Factory Frenzy" before we finally get to that picnic.

The ride returns Mickey and Minnie to their roots as slapstick stars, rather than the benign corporate symbols that they often portray in many Disney theme park productions. At last month's D23 Destination D event at Walt Disney World, Disney Parks Chairman Bob Chapek said that the ride would open in about one year from then, giving it the same "Fall 2019" opening window as that other big attraction opening at Hollywood Studios next year. (And yes, we will get to that one eventually.)

Tomorrow: We're looking forward to sunny days, sweeping the clouds away, as we ask how to get to our next attraction.

I have yet to see anything on this that gets me excited. Everything surrounding this attraction seems to be on the hush hush, which worries me that it really is just a reskinning of GMR (same vehicles and all). I guess since all the work is occurring inside and behind closed doors, Disney doesn't have to fight all the eyes peering over/under/through construction fences and drone footage like they do for Galaxy's Edge, but they really seem to be taking to Universal's PR tactics when it comes to this ride.

It's also very odd that it looks like this will open just before Galaxy's Edge, which seems like a huge missed opportunity not only for the busy summer season, but that this attraction will probably still be breaking in when DHS will need a people-eater to divert guests' attention while they're waiting to get into Galaxy's Edge and ride the Star Wars rides. Not only that, but this attraction is liable to get steamrolled by the publicity for Galaxy's Edge, with little time to gain traction that could turn this into a total dud.

The opening will also completely miss Mickey's year-long 90th Birthday celebration if the official opening cannot happen before November 18th. It's impossible to know what their plans were when the project was green-lighted, but it seems ludicrous to think that Disney would not want this up and running sometime in the summer of 2019. I cannot believe that Disney would plan major attractions like this to open a month or so apart. Disney finally gives Mickey his own attraction (though you could legitimately argue that Philharmagic could count), but any media covering the opening of this ride will only want to know about Galaxy's Edge. Way to treat your old corporate icon!! Mel Brooks was right all along! Now I'm just waiting for the cans of Perri-Air to show up at the snack carts in Galaxy's Edge.

Who cares when the attraction opens as long as its a good attraction?

DHS doesn't need to have this for the summer before Star Wars opens, it needs to have it open when Star Wars is open so that way the park has another big ride for the massive crowds. Do you really think all those people who are putting off their trips for when Star Wars is open are going to change their mind and come before to see the new Mickey Mouse ride?

The name "Runaway Railway" sounds a lot like Hong Kong Disneyland's Grizzly Mountain Runaway Mine Cars, which is a FANTASTIC attraction, IMO. I don't particularly see this one being similar to Hong Kong's, which makes the name a little misleading. I don't think this will be a thrill ride, but more of a reskin of the Great Movie Ride.

I think the attraction they should be aiming for is Mummy Returns at Universal. A thrilling dark ride coaster with a Mickey and Minnie (and Goofy) theme.

Time will tell on this one, but GMR was long in the tooth, and I'm excited to see it get a much needed update.

Any confirmation on if MMRR will have new ride vehicles are reused vehicles from GMR?

It's about time. I was disappointed when Disney decided to kick the fab 5 out of their homes to build the disappointing circus nonsense. But the mouse never had a ride. I expect a ton of screens and the ghastly new animation style I hate but I guess it'll be a cool dark ride and real Disney, not the crap they bought. It's a winner in my book.

You guys keep saying reskin, but none of the art or the description looks like a reskin. The art clearly shows a multicar train on a track, and not those large barges of GMR.

On a side note, anybody else hoping to see some of those Great Movie Ride Animatronics show up in other rides? Those western animatronics would look great on Big Thunder for example.

Responding directly to RM, this is absolutely NOT "just a reskinning of GMR". The entire building was gutted. It's a completely new attraction.

With everything that’s scheduled to happen at DHS in the fall of 2019 .... and, if rumors are to be believed, people are holding off booking their vacations until GE time ... ?? .... could Sept/Oct be a great time to visit Mickey’s house ??

Have to agree with the majority ... this in no way can be deemed a reskin of the GMR.

There were probably delays in converting the ride systems out of the building. Galaxy’s Edge big media blitz will be for Disneyland, inviting half of Hollywood like the Ep 7 premier. WDW is gonna be way more subdued maybe with some actors doing the Ep 9 publicity.

@TH - I want to believe that they're not re-purposing the GMR vehicles or ride systems, but the lack of information Disney has been pushing about this attraction just has me at a loss. I know they're playing to the lowest common denominator by spending time and effort marketing what they know will get people to plan once in a lifetime trips to the parks (Galaxy's Edge).
However, when they first announced MMRR, they did so with such gusto and excitement. They talked about this having unique technology (3-D without glasses and character interactions) and being the first ride ever developed with Mickey as the protagonist. However, since that initial announcement, it's been very quiet, and even when Chapek noted we were about a year away from its debut, this new attraction, which will be at the center of what in the foreseeable future could be WDW's second busiest park, was an afterthought of a larger presentation. This ride went from a unique, first of its kind attraction to second/third fiddle in the span of a 12-18 months.
Also, it's never a good sign when executives and Imagineers announce an attraction with enthusiasm and excitement, but then rarely talk about it again for over a year only to note that it's a year away from opening, revealing nothing more than what we already knew about it. Look at the marketing campaigns for any recent Disney addition, and you see a slow ramp up of excitement, concept drawings, and gradual leaks of specific details regarding the attraction. That's not happening with this ride, so either Disney is deliberately slow playing their hand here, knowing that they don't need to promote this since they already know that it won't drive guests to make a unique visit to DHS, or they aren't terribly impressed with what they've put together for this attraction.

@Mako - Galaxy's Edge (as well as MMRR) is looking to debut closer to November, so September/October might be a terrible time to visit, because you'll just miss the debut of Galaxy's Edge as well as this new ride.

@the_man - I agree that DHS will need a people eater when Galaxy's Edge opens, but based on the announcement that MMRR will probably not be open until sometime in November, that puts its debut almost simultaneous with Galaxy's Edge. Knowing that virtually every attraction needs at least a 4-6 week break in period (not only for the ride systems but for the operators and maintenance crews), this new attraction won't be efficiently running at full capacity until January 2020, which will not help the initial hoards that will flood DHS to see the debut of Galaxy's Edge. Even if this attraction opens in October, it's unlikely to be running full capacity until near Christmas. If you consider that they'll also be breaking in new ride systems in Galaxy's Edge, that's a HUGE amount of demand that will not be met by the limited capacities of attractions still going through their paces. Flight of Passage took nearly 4 months before it was running at full capacity (ran with just 2 of the 4 theaters for most of the summer of 2017), so to think that 3 unique, new to WDW ride systems will function flawlessly from the jump under holiday (and Star Wars geek) crowd levels would be insane. Yes, WDW will have the lessons learned from the break-in periods of the Disneyland Galaxy's Edge attractions, but even cloned attractions have their own individual personality. Also, while the mechanics and computer systems of the clones will behave the same way, guests and cast members will still need weeks to understand how these attractions need to run to operate at maximum efficiency.

I have not gotten a great vibe from MMRR since it was announced, and there's nothing Disney has said or done to prove to me that it's going to be a worthwhile addition to DHS. They are treating this attraction, which was initially billed as something very new, unique, and different, as nothing special.

I am not sure what RM's response has to do with my post about his concerns on Disney re-skinning the GMR. They are not. Nor are they re-purposing the old attraction's ride system and ride vehicles.

In regards to this new ride, I`ll just try something wildly innovative: I`ll judge it when I get to experience it, not before!

Here's what just went down between Disney and Universal online