All aboard the 2019 Hype Train for Universal's Harry Potter coaster

December 29, 2018, 1:40 PM · Continuing our look at 10 anticipated new attractions in 2019, we are down to the Big Two — new attractions based on a couple of the most successful entertainment franchises in the world.

We spend today with the new roller coaster experience coming to The Wizarding World of Harry Potter - Hogsmeade at Universal Orlando's Islands of Adventure theme park. 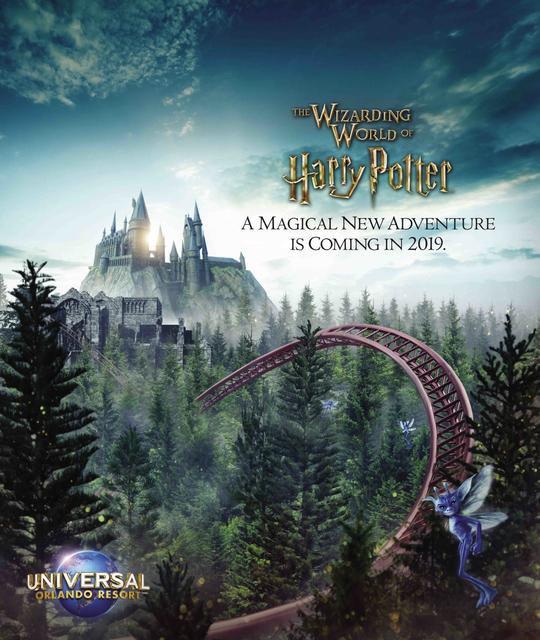 We don't have a name for this ride yet because Universal hasn't released it, keeping with Universal's recent PR strategy of trying to keep things about new attractions as close to the vest as possible for as long as it can. But we know that the ride will be themed to an adventure in the Forbidden Forest just beyond Hogwarts Castle. It appears that you will be riding on Hagrid's motorbike, which will take you through the forest and a variety of outdoor and indoor show scenes, including surprises with a drop track and a reversal on the course.

Universal has ordered hundreds of trees to plant around the track of this Intamin launch coaster, so it will blend into the local scenery — unlike its predecessor Dragon Challenge, which drew some mild criticism from fans (and even some Potter cast members) for looking like... well, a big roller coaster in a place where none existed in the Potter canon.

No word yet on an opening date for the as-yet-unnamed coaster, either. But looking at its construction progress, it appears that Universal is heading toward a late spring or early summer opening, which is when Universal Orlando opened its previous Harry Potter attractions.

Tomorrow: You don't even need a clue to guess, do you?

Reader ratings and reviews for Universal's Islands of Adventure

Investing in not only the attraction itself, but bringing in HUNDREDS of trees to increase the level of immersiveness is exactly the type of thing Universal is doing right.

Cutting corners will only result in the original California Adventure or Hollywood Studios (or Walt Disney Studios).

This looks great! I could not be more excited to visit. UO is solidifying the greatest themed land in amusement park history. So amazing!!

I'm shocked Universal opted to reserve this massive piece of land for 1 attraction in a resort where space is at a premium. They could have gone with an expansion of Hogsmead and add a smaller ride. They also could have build a ride that is more social media friendly (like Avatar Land) but they decided to build an highly themed coaster with a story and AA's that for the most part only can be seen from the ride. I hope I will be able to ride it.

I rewatched the entire movie series this fall and there is a total of 5-10 minutes set in Hogsmeade. Maybe two full scenes and a handful of establishing/montage shots. I don’t think there is much more material available for that area. Seems like we’re getting to the end of good material (ie not Fantastic Beasts prequels) for Potter attractions. If Forbidden Journey was the greatest hits( Dementors, Hogwarts) the coaster sounds like the B sides (devils snare, Cornish pixies). I expect it to be a fun outdoor attraction that Universal and the Wizarding World has needed for a while.

@OT, you said "in a resort where space is at a premium".

Not the case anymore, considering they'll be adding a third gate. Space is hardly an issue. Quality is the focus.

This is easily the most interesting attraction coming to Orlando in 2019.

Waiting for today's article on Number One on the hype train list!

Whose job is it to keep your family safe in a theme park?