Everything you need to know to visit Star Wars: Galaxy's Edge

May 25, 2019, 1:58 PM · Disneyland's new Star Wars: Galaxy's Edge land opens to the public this Friday, May 31. Whether you are one of the lucky few who snagged a reservation for opening day, or you are planning to visit Disney's Star Wars land later, here is everything you need to know to before you make the jump to lightspeed.

Galaxy's Edge takes place in a new location in the Star Wars universe rather than some familiar place from one of the Star Wars films. Disney's Imagineers have written an introduction to this land, but simply pasting that into a blockquote seems too mundane for a land as special as this. Surely there's a better way to introduce a new chapter in the Star Wars story.

(Yeah, I know it's not the "Star Wars" theme, but I didn't want the Disney music bots striking down the video, so I went with the "Mars" sequence from Gustav Holst's "The Planets," which pretty much everyone in the classical music world assumes John Williams was listening to when he wrote that theme.)

If you are visiting between May 31 and June 23, remember to bring your reservation QR code with you, either printed out or on your phone. Everyone in your group over age 18 also will need a government-issued ID to enter the land. If you did not get a reservation time already, you will need to either wait until the land opens to all ticket holders on June 24 or you will need to book a stay in a Disneyland Resort hotel to get one of these "sold out" reservations that have been held back for Disney's hotel guests.

Starting June 24, Disneyland will use a virtual queue to control access to Galaxy's Edge once it (inevitably) reaches capacity in the morning. So download the official Disneyland app, if you haven't already to save time claiming your space in that virtual queue. Set the app to allow notifications, too, so you will know when your boarding group is called into the land.

Also download the Play Disney Parks app, too. The app will serve as your "Star Wars Datapad," allowing you to navigate and interact with the land, such as translating Aurebesh signs, scanning objects for "Easter eggs," listening into communications and hacking into control panels and droids throughout Black Spire Outpost.

If you're into cosplay, Disneyland is not changing its costume rules for Galaxy's Edge. That means no long Jedi robes, Stormtrooper masks, or blasters when visiting the park. Disneybound all you want, but leave the costumes to kids ages 13 and under, as usual.

Remember that a Galaxy's Edge reservation only gets you into the land. You still need a ticket to get into the park first. Visit our Disneyland tickets page for deals on multi-day tickets to the resort, if you don't already have a ticket or annual pass.

Disneyland's Mickey and Friends parking garage will open at midnight on May 31, and 5:30am each day after that. But you don't need to arrive early if you have a reservation, as your entry into the park and the land is guaranteed regardless of crowd levels with that reservation. (Subject to weather, mechanical breakdowns, etc., of course.)

When you get to Disneyland

Guests with Galaxy's Edge reservations will check at the Star Wars Launch Bay across the park in Tomorrowland, up to two hours in advance of their reservation time. Have everyone in your party there to present ID and get your wristbands. [Update: That means that if you have an 8am reservation, you can enter the park to check in as early as 6am!]

The land will not be available during Extra Magic Hour in the mornings, nor will Fastpass be available for the Millennium Falcon: Smugglers Run ride, so don't bother looking it up on Maxpass.

From May 31 through June 23 — the period when visitors need reservations to enter — you will be limited to four hours inside Galaxy's Edge. Your time window is printed on your reservation. Keep that in mind when making Fastpass reservations for other attractions and planning the rest of your day in the park. 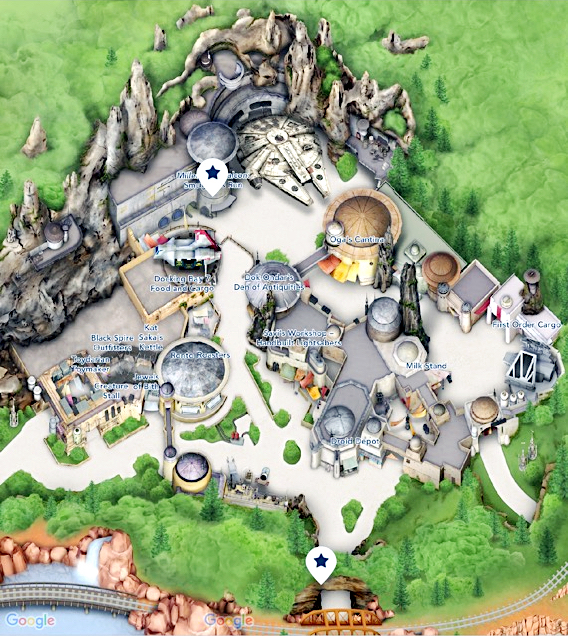 A map of Star Wars: Galaxy's Edge, from the Disneyland app. The land continues to the left for the Star Wars: Rise of the Resistance ride, which is opening later this year.

Once inside Galaxy's Edge

Disneyland is limiting admission into the land with the hope that everyone will be able to see it all in the four hours they have during the reservation-only period... or in a reasonable amount of time after that. But so many people wanting to get in, Disneyland also isn't going to run this land at anything less than capacity, either, so you are going to have to wait for pretty much everything once you are inside the land.

Based on hourly capacity, we believe that the longest line in the land might be for Oga's Cantina, the first public bar serving alcohol in Disneyland history. But Disneyland officials are expecting the Millennium Falcon ride to attract wait times in excess of two hours, though a planned single rider line might offer shorter waits. Disneyland will be providing bathroom passes to people who need to go while waiting and it also will be selling food and drinks as well as providing entertainment in the queue to help pass the time.

Food options are all counter service: Docking Bay 7 Food and Cargo, Ronto's Roasters, and Milk Stand, serving Blue Milk (from Episode 4) and Green Milk (from Episode 8). These "milk" beverages are vegan coconut and rice-based drinks served frozen in "slushie" style and cost $7.99 each.

During the May 31-June 23 period, Disneyland will prevent people from entering queues if it is unlikely that they will be close to getting through before their four-hour period is up. That's a change from Disney's normal policy, which is that you can enter a queue right up until the moment a park closes. So to maximize what you can do in the land, hit the big queues first, then move on to the shorter ones, leaving the photo ops until last, on your way out.

By June 24, we should have a better idea how guests are flowing through the land, and we will update this post with more tips based on that experience. And Star Wars: Galaxy's Edge opens at the Walt Disney World Resort's Disney's Hollywood Studios on August 29.

May the Force be with you, and we will see you in Galaxy's Edge. As they say on Batuu... 'Til the Spire!

One of my unanswered questions is around those of us who have 8a-12p reservations in getting through the Disneyland front gates quickly. We wouldn’t be checking in at Launch Bay since our time coincides with the park opening. With only 4hrs, I don’t want to lose time I could be in the new area.

I've reached out to my reps at Disneyland for an answer on that.

Disney says online that Star Wars Launch Bay will open at 6:00 a.m. for guests going at 8:00 a.m. to Star Wars: Galaxy's Edge. No rides will be open, but guests can check in.

I thought Savis workshop was supposed to be hidden? Why is it on park map, Lol?

Thanks for sharing, Denise!

After your mention, I did see an official response addressing this. Great to know!

@MrTorrance - You still need to find the door, which is supposed to be hidden, as well as be able to provide the secret password to enter Savi's Workshop.

It looks like there are some nice nooks and cranies within the land to allow for some exploration even under suffocating crowd levels, much more so than PtWoA, which only had the small paths around the the center water features to explore.

I think the important date to watch is June 24th, when reservations are no longer required to enter Galaxy's Edge. Will the land be overwhelmed with people when the shackles are taken off, or will Disney still manage entry into Galaxy's Edge through a standard queue, continuation of the existing reservations system, or MaxPass/Fastpass - this is important since MaxPass is an additional cost?

The concept drawings for Oga's Cantina seemed to indicate very limited seating, but lots of standing room. I wonder how crowded that space will be, and how quickly guests will cycle through (I'm envisioning a space similar to La Cava del Tequila at EPCOT). Will it be like trying to eat at Be Our Guest, which is impossibly difficult without an ADR? Will guests be allowed to linger so long as they keep ordering drinks, or will Storm Troopers clear out loiterers after their second or third round? With all of the food being served as counter service, will there be ample seating for guests to eat, and how will that be arranged and fit with the surrounding area?

The reports out of the CM preview said you get 45 minutes in the Cantina with a 2 drink maximum, which are all pre made. Didn’t hear how they’re going to enforce it. I think they said capacity was around 100-150 people so might be worth heading to first instead of the Falcon.

I don't mean to be rude Aaron, but the facts you've provided regarding Galaxy's Edge have been far from accurate thus far. I wouldn't be surprised to see a maximum applied, but I'll wait to hear from a more reliable source.

For the beer lovers out there, such as myself, they have released some information regarding the brews (from Sierra Nevada, Ballast Point, New Belgium, Blue Point, and Angry Orchard), including a $75(!!!!!) flight that includes collectible glassware.

What are you planning to visit this summer in Southern California?

Let's slide into some tasty waves at Busch Gardens Williamsburg