Disney announced earlier this year that the Regal Eagle Smokehouse: Craft Drafts & Barbecue would replace the old Liberty Inn in the "home" pavilion of Epcot's World Showcase. The redesigned eatery will feature regional barbecue specialities from around the United States, including

Sandwich options at the restaurant will include 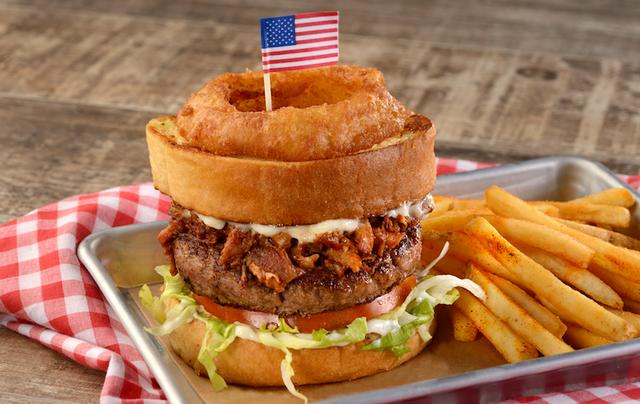 For drinks, Disney is promising "a selection of beer and cider from around the country, wines from the west coast, and specialty regional cocktails with and without alcohol," as well as Disney's usual selection of Coca-Cola beverages.

Regal Eagle Smokehouse opens this winter, though there's no specific date yet.

This looks like a great addition to the American Adventure and a big step up from the basic burgers and fries that used to serve as the basis of the menu at this location.
I believe I've mentioned this before here, but I am so over the trend of restaurants using metal quarter sheet pans with paper liners as plates. I don't have any problem with the metal pan; it's the paper liner that is the problem. One good draw with a knife across that and it will begin to rip. Combine that with the BBQ sauce and ketchup and before you know it, diners will be pulling shreds of paper out of their mouths. I'd rather eat on a plate, but if you are going to do this, leave off the paper. You have to know they are still washing these trays, so they must be clean enough to eat off without the paper.
Sorry - stepping off my soapbox.

'Murica!! (except for that salad - punt that down the street to ninnies at the France pavilion)

I do have to say that BBQ is a food style conspicuously underrepresented at WDW parks, whereas Sea World features it prominently in its most popular restaurant (as well as BGT). Flame Tree at DAK is the only example I can think of off the top of my head, and it's more generic BBQ in lieu of the regional BBQ styles represented in this new menu (though I would prefer to select the style and protein instead of being forced to select the meat based on BBQ style). Hopefully the quality here is up to snuff and the meats are cooked traditionally on-site.

@Rob - The sheet pan/paper serving style has been used at traditional BBQ joints for years (most frequently in Texas). I think most restaurants are hesitant to serve foods straight on metal for fear of chemical reactions that may occur between the food (sauces) and the metal that could alter the flavors. The paper acts as a buffer to reduce the contact, while being more environmentally friendly than a thicker, more wasteful paper plate. I agree, it's a trend that should be limited to just BBQ (burger joints going to this service style make little sense), and the paper used should be a thicker brown paper, not a wax-coated basket liner when knives and forks will be used.

This is what they need at Disneyland! I sorely miss the Big Thunder Ranch BBQ. I think the only place you can get BBQ ribs is at River Belle Terrace, but I don't want to pay $27 for a sit down meal with only a few ribs, coleslaw and beans. And I don't count the Smoked Kaadu Ribs at Galaxy's Edge, it's kind of a ribs mutation.

What? No beef ribs?

In all seriousness, I love BBQ, and this is a restaurant I will definitely try. I'm really happy to see that they're not doing generic pork ribs and chicken, but are giving folks a taste of the various different BBQ regions within the U.S.

As anyone knows, Carolina, Memphis, St. Louis, and Texas all have very different styles, and I won't say one is better than the others. Having a variety of options is excellent, and I can only hope they don't water this down in the near future, if sales aren't ask brisk as they'd like.

That's my worry at theme park restaurants. They launch with a really interesting menu, but after a few months, they update their offerings with the basic, boring fare of burgers, pizza, and chicken. Of course, in this case, I tend to not be to worried, as it's a sit down restaurant in EPCOT, where I really enjoy the quality of food all around.

I always found it odd that a theme park known for it's food would have a giant restaurant at the back of it that sold cheap burgers and fries. This is a huge upgrade. In Busch Gardens Williamsburg, you can smell the smokehouse as soon as you walk into New France, and that seems to draw a lot of people in. I'm guessing this one will do the same.

That name though. Reminds me too much of Three's Company. I imagine it will attract lots of men named Larry with feathered hair and unbuttoned shirts.

@Gabriel - This is a counter service restaurant, not table service.

Beef ribs are a tricky protein to get right. I would surmise that when most guests think of BBQ ribs, they think of St. Louis, Memphis dry rub, or baby back (thanks Chili's) pork ribs. Beef ribs are typically only found in Texas BBQ, and also tend to be a lot more expensive that would make them cost prohibitive next to significantly cheaper alternative BBQ entrees.

Are you ready for Christmas? America's theme parks are