November 18, 2019, 12:21 PM · Walt Disney World is stepping up the promotion for its upcoming 2020 attraction debuts. Today, the resort released a promotional poster for its new Mickey and Minnie's Runaway Railway, just in time for Mickey's birthday today.

The ride replaces The Great Movie Ride in the Chinese Theater at Disney's Hollywood Studios and originally had been slated to open this year. It follows Mickey and Minnie on a wild trip as Goofy steers our train through a series of misadventures on the way to Mickey and Minnie's picnic in the park. (Here's the full description of Mickey and Minnie's Runaway Railway, if you don't mind spoilers.) 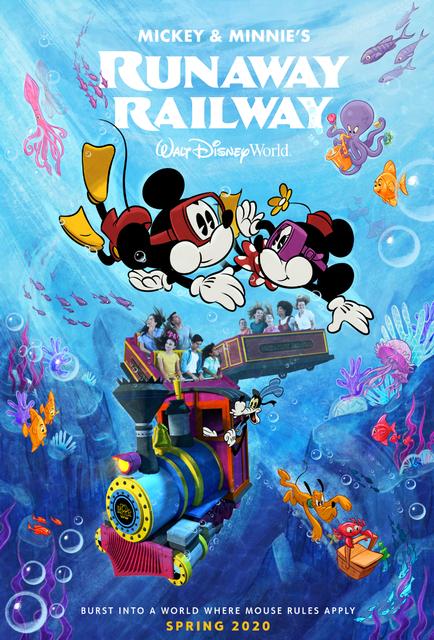 The poster appears to call to the "Over the Falls" scene in the ride, where we appear to end up underwater... but since Disney is releasing this image now, I'm no longer calling that moment a spoiler.

Mickey and Minnie's Runaway Railway opens next spring at Walt Disney World in Florida and in 2022 in Toontown at Disneyland in California.

Hopefully Mickey and Minnie are good at holding their breath. I wouldn't be surprised to see "Spring 2020" slide into "Summer 2020" since this attraction is already a year overdue.

This seems like odd timing unless they plan on revealing some more details during IAAPA like ride vehicles, technical specs, or some photos inside the building.

Well, it was mostly a Mickey Mouse birthday thing, but there's also the "let's distract from IAAPA since we never exhibit or announce there" factor, too.

I clicked on the 'full description' link, but the only water scene is going over a waterfall, then draining in a culvert, not an underwater ocean scene like the poster?

Orlando welcomes the biggest theme park show of the year