The new ride replaces the Bob coaster at the Dutch park with a €15 million Mack Rides dual-tracked powered coaster themed to a 19th-century German children's book about two naughty brothers "who drove the inhabitants of their village to despair with their mischief." The park just sent along this drone shot of the construction site. 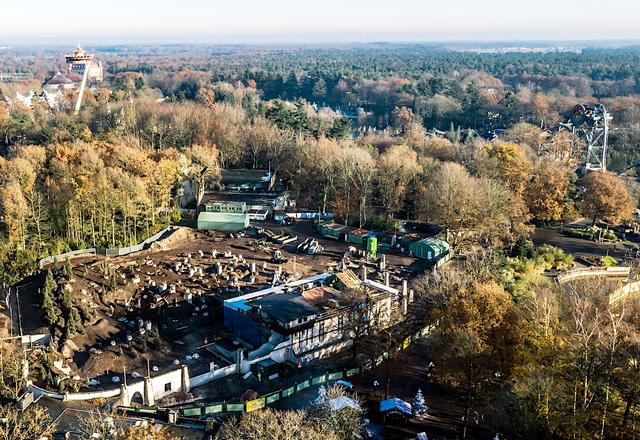 Trains on each track will run in opposite directions, and each track layout will be different, effectively creating two ride experiences in one attraction. The total capacity should be 2,000 guests per hour, the park said. In addition, once the tracks are in place, Efteling will enhance the Alpine theme by planting 125 Serbian spruce trees, along with mountain roses and other wild plants.

Efteling also is producing another one of its "making of" video series for Max & Moritz. Here is the first episode:

Visited Efteling last summer and it is now one of my favorite parks. Such a great and tranquil park with a variety of very unique attractions and fantastic food. They have truly created that "Disney" magic in a non-Disney park, and yes I know Efteling is older than Disney. If you get the opportunity, I highly recommend!

Efteling these days is completely full of building site fences !
Not just the M&M coster.
Shortly before, Fabula (re)opened.
Most of the actual building sites are refurbishments or complete rebuilds.
In the fairy tale forest, the House of Frau Holle, is demolished and gets rebuilt stone by stone. The inner structure was "gone", woodrot. The structure was 75 years old. (One of the structures on site even before Efteling was actually established as a theme park, it was a recreational (sports/nature) park before.
Diorama building (castle like exteriour) in scaffolding. Piraña refurnishment.. etc

Wonderful park in the Netherlands...I was there from Chicago during the end month of Nov...Unfortunately right during the Black Pete festival (black face celebrations)...The Efteling Cannibal ride with black savage with spoon thru nose eating watermelon didn’t help...Yes it’s a magical park but this was a distraction for me...I probably wouldn’t have visited park knowing this just like I won’t go to Dubai due to its politics and women.

All aboard the 2020 Hype Train for Mystic River Falls