January 17, 2020, 11:47 PM · Festival season kicked off today with the debuts of the Epcot International Festival of the Arts at Walt Disney World and Lunar New Year at Disney California Adventure today. Since I'm in Southern California, you're getting Lunar New Year here.

Of course, the festivals weren't the big news at Disney's theme parks today, not with Star Wars: Rise of the Resistance opening at Disneyland and fans claiming all of the day's boarding spots within a few minutes. And Epcot debuted three new movie attractions today, too. But the festivals helped balance the load of guests on both coasts and reaffirmed that there's not really any off season at the Disney parks anymore.

This is the Year of the Rat everywhere but at Disneyland, which chooses — understandably, perhaps — to celebrate this as the Year of the Mouse, instead. So Mickey and Minnie get co-star billing with Mulan in this year's production. You also can meet Mickey and Minnie in their Lunar New Year costumes, as well as Mulan and Mushu or the Three Little Pigs in the festival character meet and greet next to the Paradise Garden Grill.

But that's where I headed for lunch today, selecting an absolutely delicious Bahn Mi sandwich ($11.99), which is part of the Paradise Garden Grill's special Lunar New Year menu. 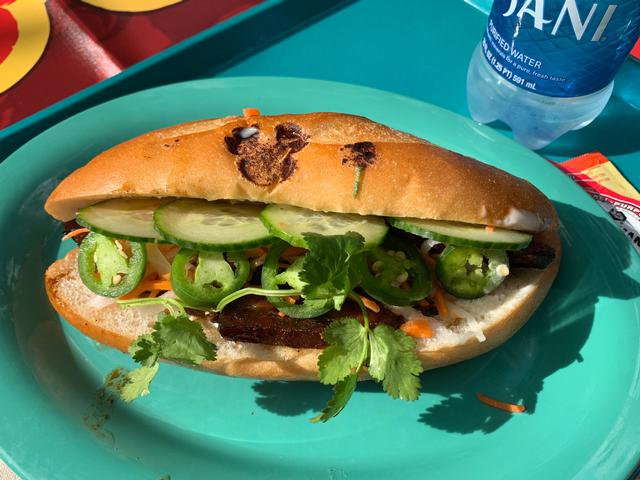 Love the little Mickey head that the kitchen branded onto the baguette, which is Full Poppins — practically perfect in every way. Chewy at the crust while light in the middle, the baguette cradled the seasoned mayonnaise that dressed a generous portion of grilled, marinated pork belly. Pickled daikon and carrots completed the sandwich, which came topped with cucumber, jalapeño and cilantro. I will dream of this sandwich, which is my choice as the best thing to eat inside a Disneyland theme park right now.

You can find more Asian fare to eat at the four festival marketplaces, which start serving at noon. Mobile ordering is available for all the marketplaces, so don't waste your time queuing in those long lines when you can just stroll up and get your eats at your convenience, instead.

Disney is also offering several Lunar New Year activities, including Chinese brush painting and calligraphy, new year wish writing, and coloring crafts for the kids. If you're staying into the evening, the "Hurry Home" prelude to World of Color is back again this year, too.

Efteling completes the track for its new family coaster