Universal Orlando is ready to let the good times roll

January 29, 2020, 3:46 PM · So how do you let the good times start rolling, anyway? Well, Universal Orlando did it today with a media event... for this weekend's kick-off of the 25th annual Mardi Gras festival at Universal Studios Florida.

Creative Director Blake Braswell introduced three Mardi Gras parade floats that Universal wheeled into one of its sound stages for today's event, talking up this year's "Treasures of the Deep" theme.

Yesterday, we talked about Universal's new Mardi Gras menu this year, so I was looking forward to getting to taste the food. Universal set up a buffet, and I started with a catfish po’ boy, softshell crab slider, Pao de Quiejo, gator bites, crab étouffée, and king cake. 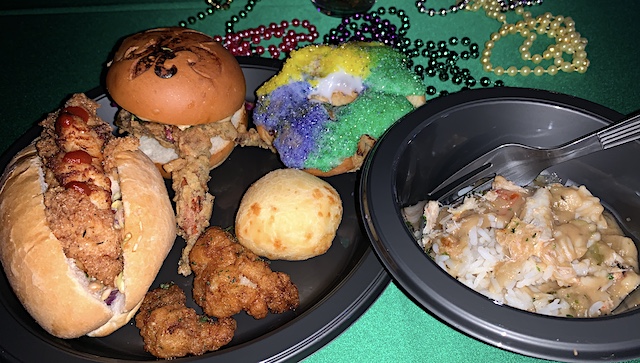 On a second plate, I went back for the sauerbraten with buttered spaetzel, a chicken & andouille po’ boy, and beignets. My favorites? For the returning items, I could eat the étouffée and king cake all day long. And the sauerbraten beat all the newcomers to the top of my "must eat more" list.

Hey, everything was good, but none of the sandwiches wowed me the way that the étouffée and sauerbraten did. Now that could just be a function of the event. With bread taking up so much of the mass of a sandwich, that bread needs to me amazing for me to fall in love with it, and that's tough to have happen with sandwiches that are sitting under a hot lamp for a media tasting. So YMMV IRL.

After the tasting, Universal reps led us over into Universal Studios Florida for another new feature of this year's Mardi Gras - a tribute store.

Modeled after the tribute stores that Universal Orlando has been developing for Halloween Horror Nights each year, the debut Mardi Gras shop shares an aesthetic with the HHN productions, which creative designers embraced.

Mardi Gras starts this Saturday and runs through April 2 at Universal Studios Florida. In addition to the daily parade, food offerings, and the tribute store, Mardi Gras includes a headliner concert schedule on the weekends, featuring acts such as Marshmello, Luis Fonsi, and Diana Ross.