Dinosaurs or Super Heroes: Who Wins the Summer?

April 11, 2021, 7:39 PM · Now that Disney and Universal have announced opening dates for their biggest new attractions in the United States this year, it's time to ask which one you're more excited for.

Are you looking forward to the opening of Avengers Campus at Disney California Adventure on June 4? Or are you going for the debut of the Jurassic World VelociCoaster at Universal Orlando's Islands of Adventure just six days later, on June 10? Of course, many of us - including me! - are looking forward to both, but I would like to ask you to pick a favorite here.

Avengers Campus will be Disney's first crack at an entire Marvel-themed land, headlined by Web Slingers; A Spider-Man Adventure - a 3D, interactive, family dark ride. A Pym Test Kitchen restaurant and Doctor Strange interactive show fill out the land, which also will encompass the Guardians of the Galaxy: Mission Breakout ride that opened in 2017. 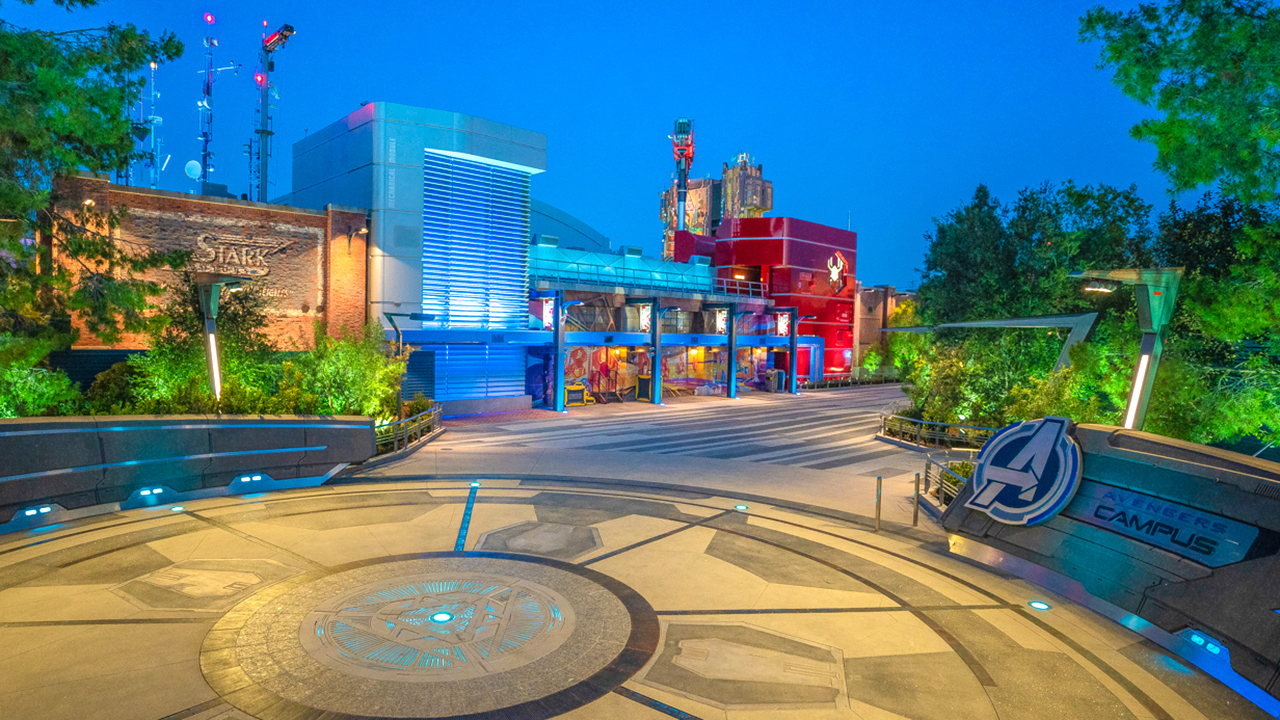 Universal's Islands of Adventure has had a Marvel-themed land - including a ground-breaking Spider-Man ride - ever since it opened, but the park's highlight for 2021 will be the addition of the VelociCoaster - Florida's tallest and fastest launch coaster. Jurassic World's velociraptor pack - Blue, Charlie, Delta, and Echo - are the stars here, but some of the human stars from the film series will also appear in the attraction, including Chris Pratt, who also appears in DCA's Avengers Campus on the Guardians of the Galaxy ride. 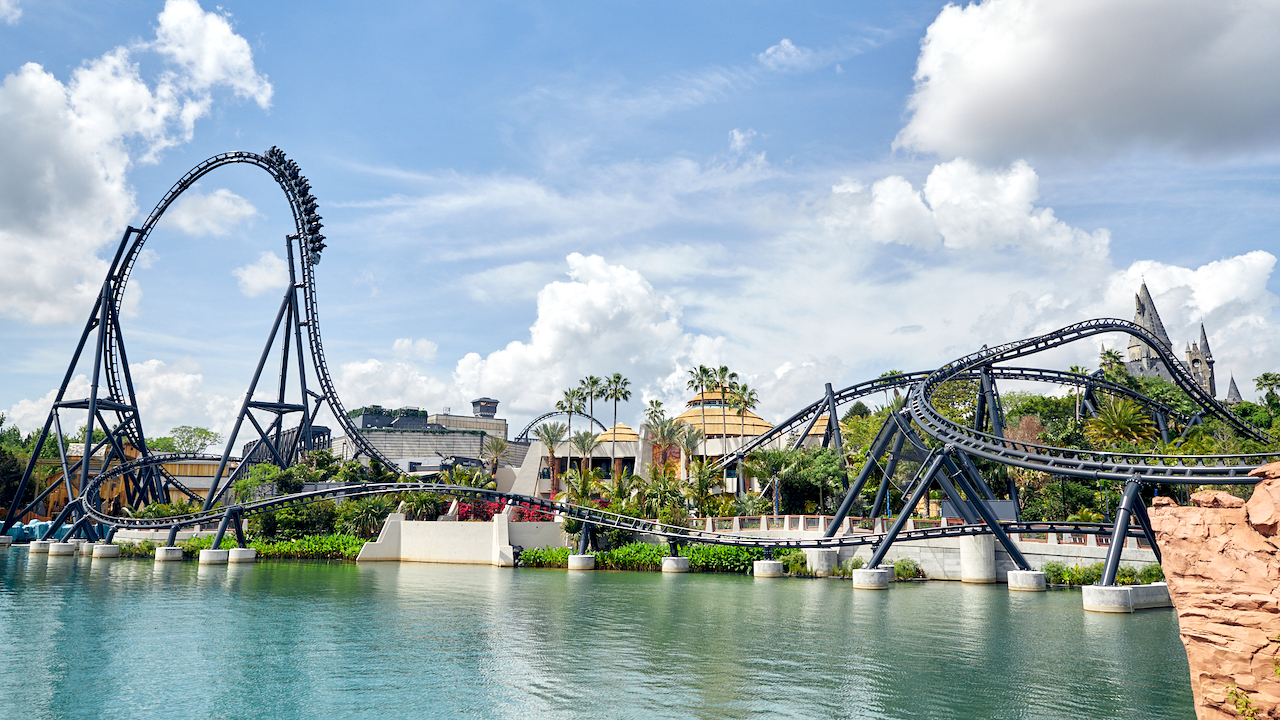 This is a classic Disney vs. Universal match-up. Disney is leaning into the younger family market with an unrestricted family dark ride and a Jedi Temple-style participatory show, aimed at bringing little kids on stage. Meanwhile, Universal flexes toward the older family and young adult markets, with a thrill ride tied to a hot film IP.

And you can throw in the fact that some fans undoubtedly will be looking forward to Avengers Campus not so much because they think they will love the experience but just because they want to see how Disney tackles and IP that Universal well established itself with two decades ago. This also will be the first of three Avengers Campus lands coming to Disney Parks around the world, signaling what Disney has in store for Paris and Hong Kong. Meanwhile, Universal is building upon the "story coaster" concept that proved so successful for the resort with its Hagrid's Magical Creatures Motorbike Adventure two years ago. There's just so much to discover with both of these attractions.

Of course we will be covering both in the weeks leading up to their official debuts in June, so stay tuned. In the meantime, though....

I voted for VelociCoaster. Looks like a truly great ride. I’m interested to see if, and how, Avengers Campus will showcase the Spider-Man stunt robot that we’ve seen glimpses of.

AC would've beaten VC if AC also had that Avengers E-ticket at launch, but a crapper version of Midway Mania, oversized food, a knock off jedi training academy with just waving your hands around, and a bunch of shopping places will not beat a world class intamin blitz thats themed to freaking dinosaurs.

But hey, let's experience both then we'll see who wins.

Without VelociCoaster, I wouldn't even be considering a Florida trip this year as I just went last year. However, because of VelociCoaster (and to a lesser extent Iron Gwazi), I am seriously considering a trip to Florida in the second half of 2021, and will absolutely visit in 2022 if that trip cannot happen.

On the other hand, Avengers Campus has not affected my plans to visit Disneyland one way or the other. Since last fall, my plans to visit Disneyland again have remained either when APs go back on sale or in late 2021 when operation will likely be close to normal. While I do look forward to checking Avengers Campus out the next time I visit, it has not affected my plans for future visits in any way.

Neither of these excite me at all, but the spiderman ride just looks dull based on what I have seen. At least VC looks like something exciting that if I was there I would enjoy it

Despite much preferring the Disney experience over the Universal Experience this choice is a no-brainer for me. AC doesn't really excite me at all. The ride will no doubt be well-crafted and fun but it's not an E-ticket attraction and the rest is pretty much just dressing - cool if you're into Avengers, not so exciting if you're not. VC oni the other hand is a simply stunning looking coaster, beautifully themed and absolutely deserving of E-ticket status. Given that I'm in the UK I won't be experiencing either of these this year but it's definitely VC that is the genuinely exciting option of the two.

See, if the question were, Which are you more excited about: VelociCoaster or Webslingers? Then I would have picked VC, hands down. But as the choice was a new ride in an old land, or an entire new land, I have to go with Avengers Campus.
I love how much work Disney (and Universal) put into new lands in recent years, and enjoy any opportunity to walk around in a fully immersive themed environment. Especially one themed to a intellectual property that I am familiar with. So, I guess my answer is based on quantity over quality here. Sure, I'll bet V.C. will knock my socks off, but A.C. is better positioned to rekindle my sense of child-like wonder.

I agree with B Goodwin. I think VelociCoaster has the chance to be one of the best roller coasters in the world, and I think UC will provide a highly themed experience. However, the lack of other improvements in Jurassic Park to fit the theme of the new coaster, which is in the JW universe. Avengers CAMPUS provides an entire land for guests to explore, and while it's lacking the e-ticket attraction, there are multiple experience for guests to explore. I'll also point out that while the new Spiderman attraction appears to be a reskinning of Ninjago, Disney's most recent d-ticket level attractions (MF:SR and MMRR) have been HUGE hits, and for my money, MF:SR is more re-ridable than ROTR. My one big concern with the new ride is whether Disney will be able to crank of the capacity. Despite having 4 loading areas, Ninjago has a dreadfully slow boarding process, and while having just 4 guests to a vehicle (which should help under pandemic restrictions that will allow just 1 party per car) is perfectly suited to current operational limitations, it still will be a generally slow loader. Given that it will be the ONLY new attraction debuting with AC, I worry that it will fail to meet the high expectations guests will have for this new land.

Not surprising that a single attraction by Universal is more exciting than an entire land by Disney.

I go with B Goodwin and Russell: As a ride, VC looks a true winner and must see. But the entire Jurassic Park area has lost some luster as seems they can't figure out identity with the new movies (I still prefer the original raft ride over "improved" version). Meanwhile, while the Spider-Man ride looks a little rough, the Campus itself promises some fun and immersion and interested how it works as Disney obviously wants to take cues from Marvel Island but craft its own identity.

Personally, I've never been a true "only Disney vs only Universal" guy as I can love Marvel Island and Potter as much as Toy Story Land or Epcot so I look forward to any fun to make theme parks better to visit.

With regards to making the Jurassic Park/World land more consistent, I’d think that updating River Adventure to match Hollywood’s version, would be a step in the right direction. Have you seen the new Indominus Rex animatronic? VERY impressive!

Avenger's campus is just embarrassing, it looks like an extension of Downtown Disney. And Spiderman is Midway Mania / Buzz Lightyear all over again. If I wanted to play Wii I could stay home. An awful long way to go to make Guardians of the Galaxy make sense.

Alls I know is the Interwebs are about to be filled to the brim with people trying to contrast and compare which Spider man ride is best.
The Amazing Adventures of Spider Man is going to be HARD to beat.
I am not a huge fan of shooter dark rides. I think interactivity is great, but I believe just being a passenger on an outstanding attraction is interactive in and of itself. I don't need to shoot or sling webs to be wrapped up in a good story. Y'all know what I think about Midway Mania. Sometimes I think that takes away from the complete enjoyment of what has been created. I'm sure there will be a lot of opinions shared very soon. Can't wait!

Velocicoaster was, as usual, running a continual loop again today. Strangely the 'short-cut' bridge was closed, so maybe there's something going on in respect to getting ready for some sort of soft opening, or even better, a passholder preview couple of days ..... yeah I know, I can dream :)

Not so busy today, thank goodness, but Hagrid's soon ran out of the virtual queue passes.

Went to the Bourne Stuntacular as well today. Impressive, even though it was slightly weird seeing some of the participating cast members wearing masks, but then again it was those in the fight scenes, so I suppose not surprising.
Technology has certainly come a very long way since Terminator 3D !!

" I think interactivity is great, but I believe just being a passenger on an outstanding attraction is interactive in and of itself."

VC easy - Disney did update haunted mansion and Snow White too tho ??

The coaster appears to be an E Ticket, so that's more important, in my book, than a new land with a D Ticket ride.

Neither one is really standing out to me, but a dark ride will always trump a coaster to me, so I picked Avengers.

There’s no way the Velocicoaster will lose. The DCA Spidey ride will not be anywhere as good as the the Islands of Adventure one. Problem with Avengers Campus is that they’re limited to the films instead of going all in to the lore of the comics. Look at the IoA one: it isn’t based on any Spidey show/movie and it doesn’t hurt it due to it’s just Spider-Man fighting villains.