April 20, 2021, 1:07 PM · The London Resort today revealed details and concept art for one of its themed lands, including an announcement of the first roller coaster at the planned theme park.

Base Camp will be a dinosaur-themed land - "the world's first prehistoric nature reserve" - located in the northwest corner of the park, The London Resort CEO PY Gerbeau revealed at Blooloop's "greenloop" sustainability conference this morning.

Base Camp was not among the seven land concepts that The London Resort announced in late 2019. Its announced position within the park suggests that Base Camp might be a replacement for The Isles or The Jungle concepts that the resort originally revealed.

The land's anchor attraction appears to be a Vekoma flying coaster themed to the Quetzalcoatlus, a North American pterosaur that was one of the largest known flying animals of all time.

With more than a kilometer (3281 feet) of track, the multi-launch coaster will reach speeds over 70 mph on a terrain-hugging course meant to recreate the hunting style of the Quetzalcoatlus. A second, family coaster, a motion-base 4D ride, an interactive dark ride and a play area featuring climbing walls and zip lines will round out the attractions in the land.

The land's top dining location will be a table service restaurant set at the edge of an underwater cliff, "offering guests a front-row seat to the flora and fauna of the prehistoric oceans just beyond the glass." 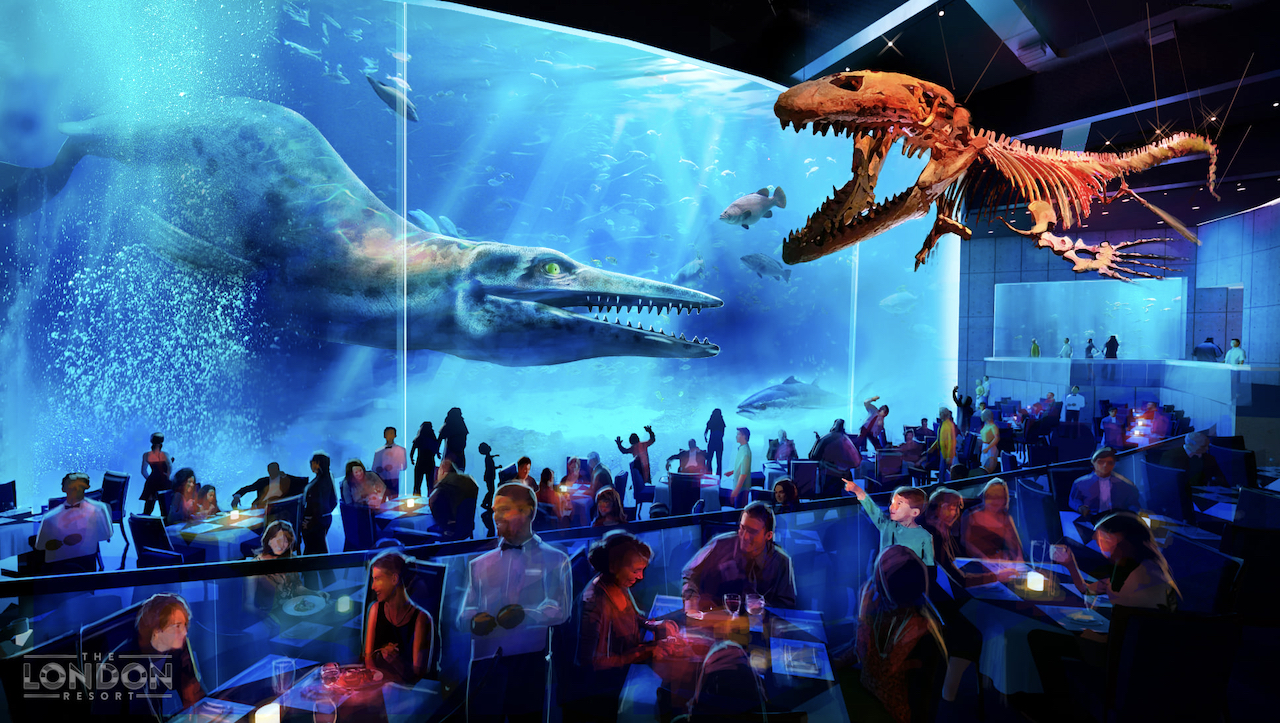 "Unlike popular films that depict dinosaurs as villains, things don’t always go terribly wrong here," Gerbeau said. "We are building a land of preservation and celebration of dinosaurs."

The London Resort is now aiming for a 2024 debut, though the resort's Swanscombe Peninsula location has been named a "Site of Special Scientific Interest" by Natural England, potentially complicating the resort's ability to win approval to develop the brownfield land. The resort has promised to be carbon neutral and deliver a net biodiversity gain to its site when it opens.

So is this actually going to happen, or is it more like Hitler pushing around non existent battalions in the bunkers war room?

The Quetzalcoatlus is fishing for investors?

They had me until they said "Vekoma flying coaster".

That restaurant looks so cool. US Beijing should've done that with their Jurassic World land.

This looks so cool! I hope it really comes to fruition. I've yet to visit Europe but when I do London is at the top of my list. This park would definitely command a day from my vacation there if its even half as ambitious as they say it is going to be.

Given that Vekoma designed and built FLY at Phantasialand I wouldn’t have any worries about them being behind this proposed coaster.....

It's not that I doubt that Vekoma is involved, it's that their involvement in this project concerns me that the coaster will be terrible.

What makes you think that it will be terrible? I mean, their older coasters are bad but their newer models seem to be super smooth and pack a punch.

Vekoma has improved recently, but when it comes to coasters where the carriage is above the seats (flying, suspended, and inverted coasters), they had yet to produce a single installation that provides a smooth ride before F.L.Y. Perhaps they can duplicate the success of their most recent coaster here, but I will remain skeptical because of Vekoma's long and consistently bad track record with these types of coasters.

Wow, this concept art doesn't even smell like the original ones who where presented when this park was first announced, call me unimpressed and disappointed.

Why would we assume that having produced F.L.Y Vekoma would produce anything less smooth or impressive? I'd have thought that coaster shows they have resolved any issues they may have once had.

One "winner" doesn't plaster over years and years of junk. If it were a clone of F.L.Y., sure, but this has a custom-layout, and will need to stand on its own merits and reverse the decades-long perception of the Vekoma brand, particularly when it comes to overhead carriage designs.

For every good Vekoma coaster out there, I can name you 5 that are complete garbage, some of which are so bad they're either SBNO or already scrapped. Once a Yugo, always a Yugo.

Okay, now we're going to need a thread where we put together a complete list comparing roller coaster companies to car brands.

Can SeaWorld San Diego Open to Out of State Visitors?