May 18, 2021, 12:17 PM · The Walt Disney World Resort is showing off new cast member nametags for its upcoming 50th anniversary celebration.

The 18-month "The World’s Most Magical Celebration" kicks off October 1 to commemorate the 50th anniversary of Walt Disney World's opening on that date in 1971. Disney typically rolls out a special nametag design for each resort anniversary, and this one reflects the "EARidescent" design motif that Disney World has selected for its 50th birthday. 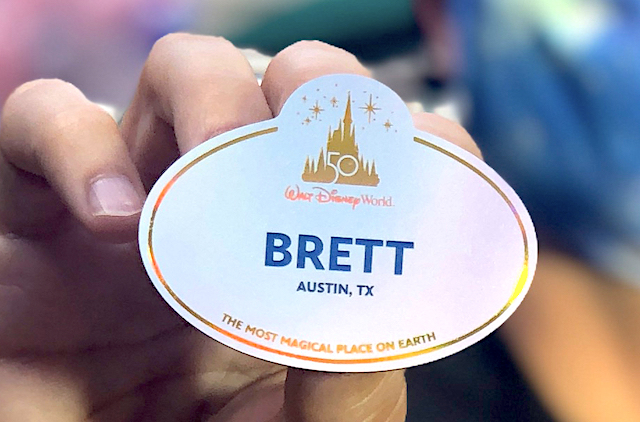 The nametag features royal blue lettering, designed to match the new color of the turrets on Cinderella Castle, color-shifting gold foil, and a color wash that gives the nametag "a pearlescent shimmer," according to Disney.

"Designing this nametag meant a lot because it allowed me to think of every single person who will be receiving one for the 50th anniversary celebration," Brett Owens, a senior graphic designer for Disney Live Entertainment, said. "I wanted to put myself in the position of the cast members who have been here 10 years - 15, 20, 40 years - and just imagine their extreme sense of pride and their excitement to celebrate this huge, huge occasion with the company and the parks."

The new nametags will be distributed to Walt Disney World cast members in time for the celebration kick off October 1. That day also will see the debut of Remy's Ratatouille Adventure in the expanded France pavilion at Epcot's World Showcase as well as the start of the anniversary celebration across the resort.

I saw a video of how this reacts to different lighting angles.

I wore a lot of different name tags in my career with Disneyland, and loved some more than others, but this may be the most beautiful name tag design I've ever seen.