Disney is not the first theme park to build a Marvel-themed land. Universal Orlando did that 21 years ago at Islands of Adventure. But while Universal's land matched its look to the comics, Disney has taken its cue from its Marvel Cinematic Universe. Yet much like an MCU movie or TV show, Avengers Campus leaves us with some questions.

The Disneyland Resort created its first Marvel-themed ride when it redesigned its Twilight Zone Tower of Terror as Guardians of the Galaxy: Mission Breakout. Disney now has designated Mission Breakout as part of Avengers Campus, which raises the question of what exactly our heroes might be doing about this ostentatious intrusion from intergalactic jackass Tanleer Tivan that is looming over their headquarters. 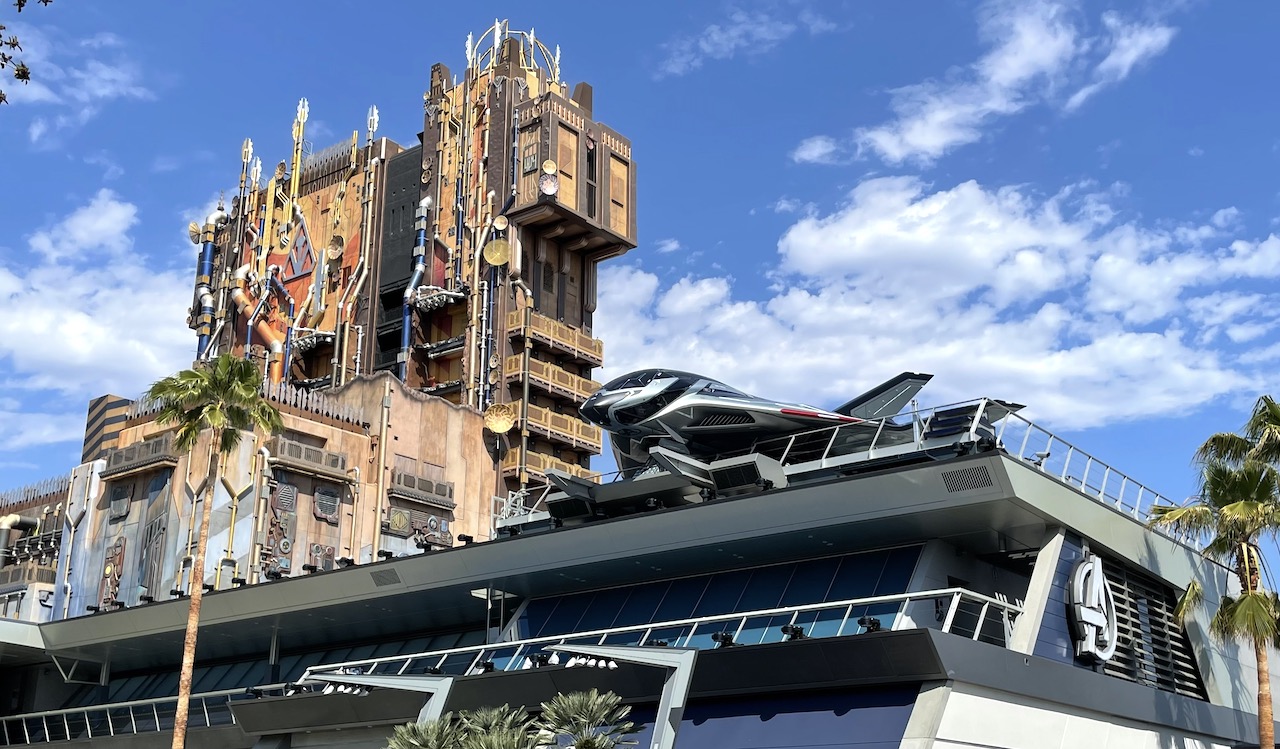 And what's going inside that Avengers headquarters anyway? Right now, visitors may find occasional stunt shows playing on the building's second-floor deck. But when now-Disney CEO Bob Chapek introduced Avengers Campus at the 2019 D23 Expo, he suggested that a phase two of Avengers Campus would include a Quinjet ride to Wakanda, based on an all-new ride system.

Disneyland, of course, opened a new IP-driven land without its biggest attraction in 2019 with Star Wars: Galaxy's Edge. And it fans stayed away all summer. With the pandemic scuttling plans across the industry, when might the headquarters building at Avengers Campus become something more than a facade?

But like an MCU flick, Avengers Campus delivers plenty of answers, too. For example, yes, you can design a superhero ride without a villain. Check out WEB Slingers: A Spider-Man Adventure, which I review in a separate post.

Disney finally will serve fans that shawarma they have been demanding ever since the original Avengers movie came out. Check out our preview of the land's new food for that. And the creative team at Walt Disney Imagineering has loaded Avengers Campus with the Easter eggs that fans have come to expect.

Their backstory tells us that Avengers Campus is built on old Stark Industries property that Tony Stark has turned over to Peter Parker to develop the Worldwide Engineering Brigade. The WEB (Marvel loves acronyms, doesn't it?), is looking to recruit STEM talent to outfit and support the next generation of superheroes. But reminders of the site's past remain, include parking signs for Stark Industry's founder and his assistant. 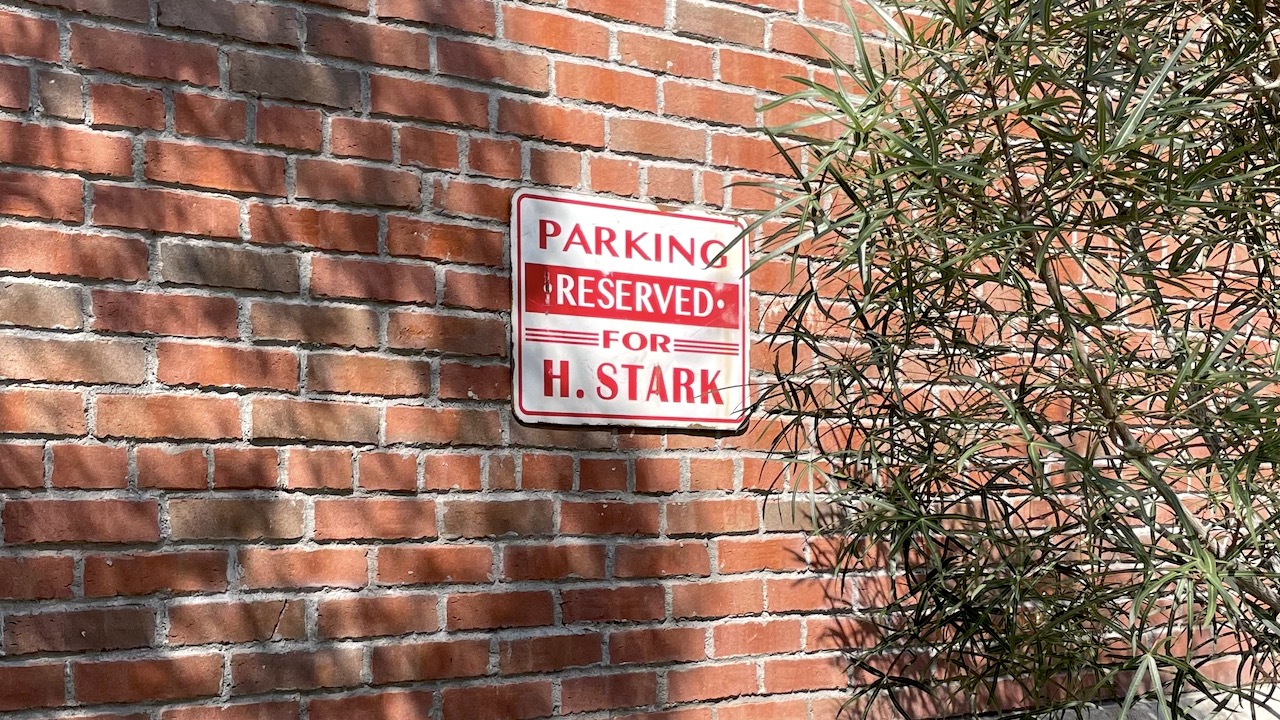 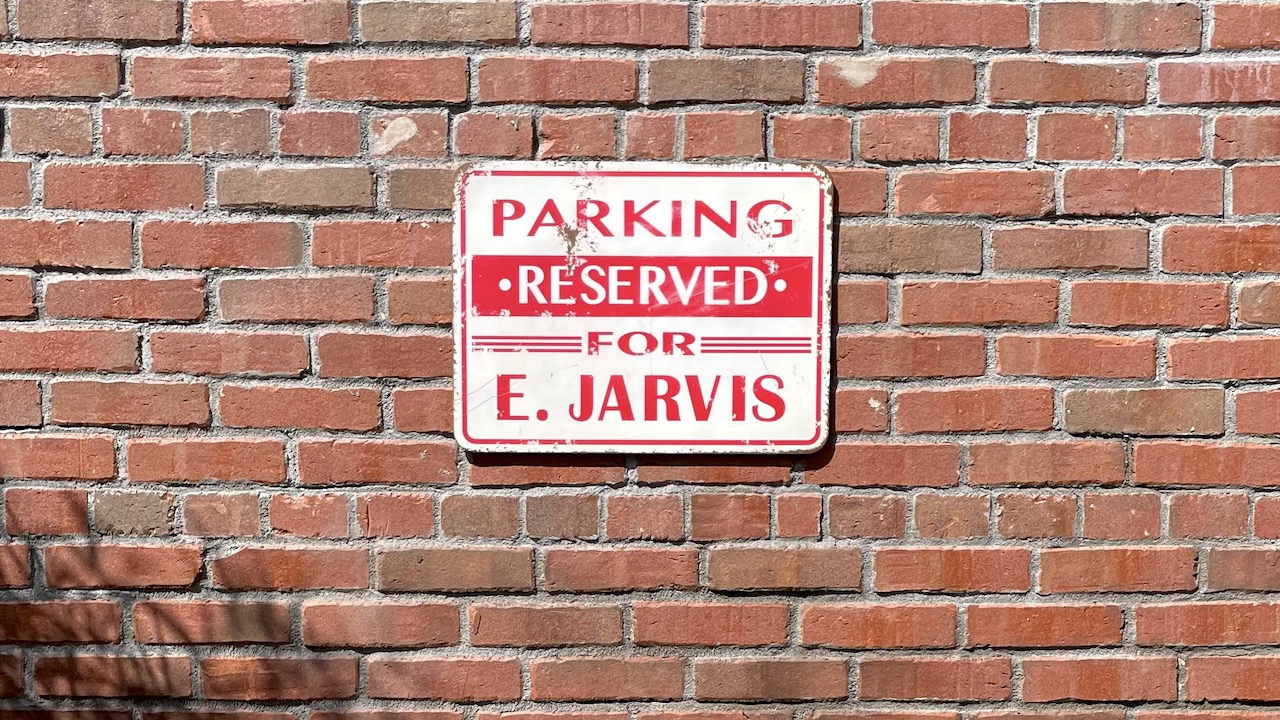 But you don't need to look too far from those for a reminder of the nasty byproducts of some of Stark's work. Anyone got the number for the EPA? And maybe OSHA? 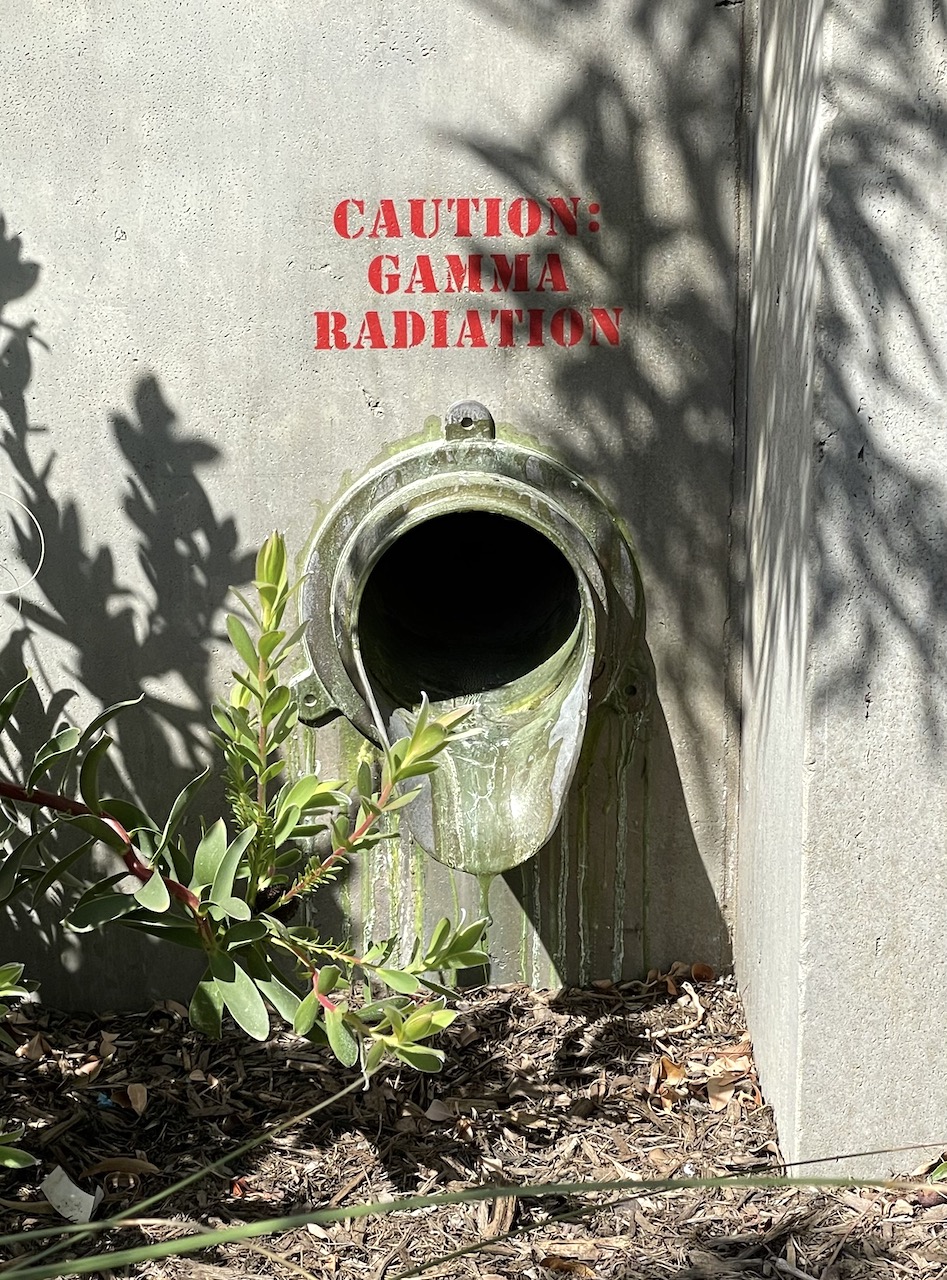 WEB students are painting over Stark Industries' sometimes sketchy past - literally, with this mural on the side of the WEB headquarters building. 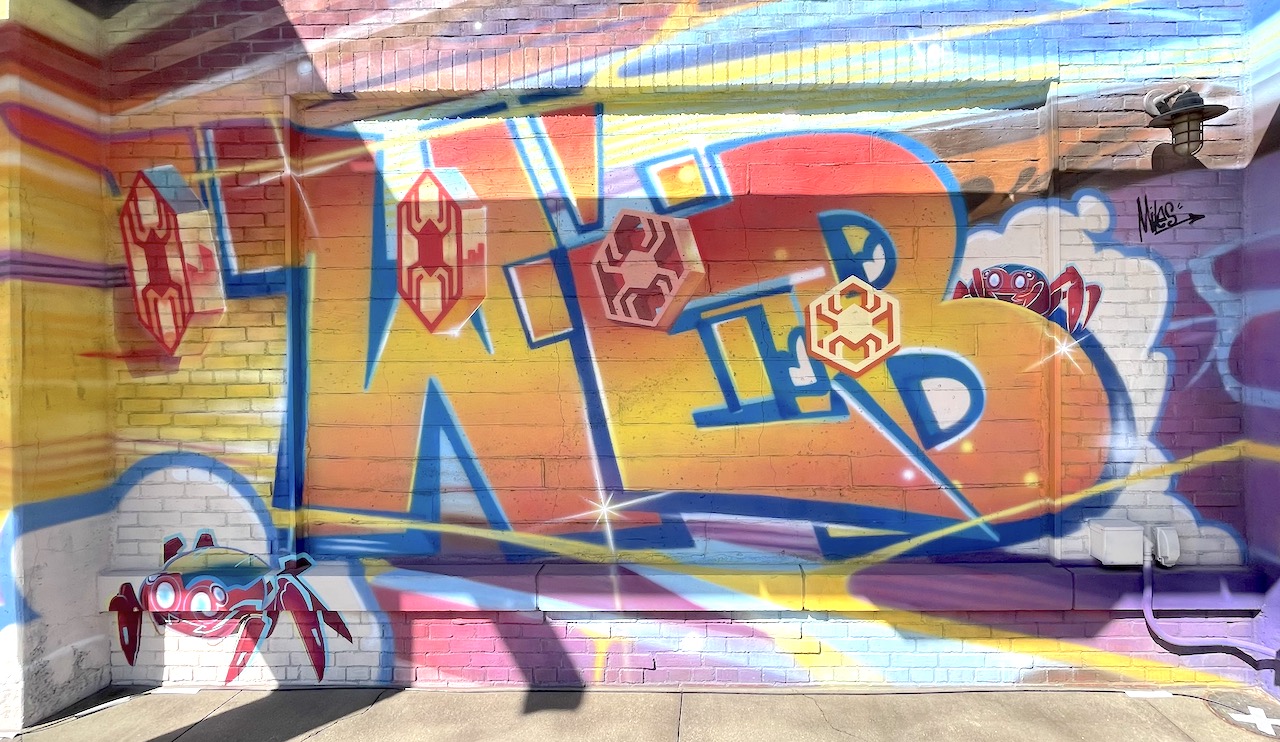 At the land's media preview earlier this week, I spoke with Executive Creative Director Dan Fields about the many superhero character encounters that fans can expect in Avengers Campus. And a friendly neighborhood Spider-Man stopped by for a moment, too.

The WEB concept imbues Avengers Campus with an earnestness that further convinces me that Disney California Adventure really is the west coast version of Epcot that Disneyland's second gate initially was designed to be. Sure, there are all the food and culture festivals. But Avengers Campus shows us, in the most obvious instance yet, Disney wrestling with the modernist optimism that inspired Walt to envision an Experimental Prototype Community of Tomorrow.

Howard Stark is the MCU's Walt Disney - if he was in the business of building weapons instead of theme parks. Perhaps because we have had a lot more Howard Starks in the world than Walt Disneys, the optimism that many people (well, white ones, at least) felt in the 1950s and 1960s has given way to a far more bleak outlook about our collective future.

The reusable merchandise bag that Disney is selling in Avengers Campus literally declares, "Science is Awesome." But how many Disneyland visitors really believe that anymore? Disney is rebuilding much of Epcot because its 1982 vision for Future World simply does not resonate with as many visitors today as superheroes and animated characters do.

I have written before about the opportunity that Disney has to use its cultural power to inspire people: Why America Needs Epcot... and Other 'Non-Fiction' Theme Parks. But to do that, Disney must grab visitors by the heart before it can begin to get into their heads.

Avengers Campus is not Stark Expo. It's not a bombastic display of power and technology - though WEB Slingers includes some pretty nifty motion sensor tech, if you care to look for and think about it. Avengers Campus looks like any one of countless tech-incubator gentrification projects you can find around the world. Its pro-STEM messages are easily overlooked by anyone coming to watch Black Widow beat the heck out of Taskmaster.

But those messages are here, for the children and the adults whose eyes and ears and minds might be open to them. Maybe science cannot literally help you sling webs from your wrists or stock an entire bar with a single can of beer. (Read that Avengers restaurant piece, below.) But science and engineering can do amazing things - maybe even enough give this dystopian, pandemic-wrecked world the great, big beautiful tomorrow that people like Walt Disney once believed it would enjoy.

Will it? Maybe that's the biggest question that Avengers Campus left me with.

And if you were drinking every time someone said "Marvel" during the show... well, you'd still be totally sober. Thanks to that contract!

For more on Avengers Campus, please visit our other stories:

My biggest question is where are we going to see references of A Bug’s Land in the area? Is Flick one of the ants working in the Pym’s Test Kitchen?

I have to say, they’ve found themselves a pretty great Benedict Cumberbatch lookalike.

I'm curious if the mini-shows will be running on a set posted schedule (like WWoHP), or if you just have to stand around and wait for them to happen (more like Galaxy's Edge). Because there's very little to do in the land, especially since they're using a virtual queue for WEB Slingers, there will be a lot of people just standing around waiting for stuff to happen. There don't appear to be any iconic photo ops or must-see shopping/browsing experiences like Galaxy's Edge and WWoHP, so I'm trying to imagine what guests are going to do while they're waiting to see some of the entertainment.

My guess is that the Dr. Strange show will be on a posted schedule, but the other character appearances appear to be more random and spur of the moment, forcing guests to luck into seeing the shows or sitting around waiting for them to happen.

Disney decided that California Adventure didn't have enough dead zones with the Hollywood Abandoned Area and the Pixar Parking Lot, so they dropped an outlet mall where Bug's Land used to be with a Midway Mania ripoff that makes the Monster's Inc. ride seem impressively themed. You can feel the magic!

Looking forward to the new ride they’re building, using a new system etc, but hate that it’s going to be put into a land that’s theming looks like the Americana or Galleria, haha. It looks like Disney Springs, for real.

@FingerPoppinDaddy - I wouldn't get your hopes up for the new ride. While it was teased when Avengers CAMPUS was announced, Disney hasn't even begun physical work on it nor officially announced it. Even if they start working on such an attraction today, it wouldn't be finished until 2023 at the earliest. My guess is that this rumored attraction is 3-5 years away from reality, if it even happens.

FWIW, the rumor was that the teased Quinjet/Wakanda attraction was going to be based on a similar ride system to FoP, so not a completely new system. Designs and concepts change, so it's still possible that Disney eventually uses a unique ride system here, but I just don't think it's something to even bother thinking about right now since it's a number of years off.

Disneyland has to finish MMRR (not due to open until 2023) and figure out how to move forward with expanding its property before finalizing a new Avengers attraction.

I believe this land is supposed to be set prior to Infinity War/Endgame, much like Galaxy’s Edge takes place between The Last Jedi and The Rise of Skywalker. Ironman will definitely have a presence in this area as will Black Widow (although I am sure she will somehow be resurrected into the current MCU timeline after her film is released). However, Disney Parks’ timelines are often ambiguous, i.e., The Beast welcoming visitors into his castle when, as The Beast, the prince hated visitors. Avenger Campus will certainly have timeline issues for MCU fans. At the opening ceremony, a Sam Wilson lookalike appeared on stage as Captain America, but all through the hype video prior to the ceremony, Steve Rogers was shown to be Captain America. Even funnier, Steve Rogers could be seen in the background by the Quinjet while Sam Wilson was wearing the new Captain America uniform!

I'm happy to see that they're actually USING the catapulting Spider-Man-Bot! To me that seemed like one of those ideas that they show you but would then get cut in order to save money. (I'm still cynically feeling that it may not run much past press previews.)

And good grief those dead spots between scenes on the ride are REALLY dead, aren't they? Where is some dramatic music or voice-over? Maybe a shadow of Spidey swinging along with you to the next scene? All the same, Robert's frenetic web slinging action is contagious, so I bet it's much more fun to ride than to watch.

'Campus' and students writing graffiti on a wall doesn't do it for me. I want to be immersed in a fantasy world, not a semi-real world. The food offerings also don't appeal that much to me. I know the $100 Pym-ini sandwich supposedly feeds 6-8 people, but for that price, I want beef brisket or pulled pork, not salami and ham. If you want to charge $100, maybe make it a giant pizza. The giant chicken sandwich with the small bun also doesn't appeal that much. The only thing that appeals to me is the shawarma wrap, but it looks like they're pre-made, so I'll have to actually try it before saying whether I like it.

I also wonder how the proposed DisneylandForward expansion might affect Disney's plans for Avengers Campus. With the prospect of acres of additional land to work with on the other side of the park, will Disney choose to employ some Marvel themes over there, if they win approval for that expansion? And would Disney commit to anything extra in AC until it knows whether DisneylandForward will proceed or not?

That's supposed to be resolved in 2023, which is when Runaway Railway opens. I don't expect any announcement about AC Phase 2 until at least then.

I'm not impressed at all by WEB Slingers, but the outdoor entertainment looks amazing. I can definitely see walking through the land to see stuff like that, but I don't think I'd waste my time on yet another screen-based shooter. I know it will appeal to a lot of people and be popular, and that's fine -- it's just not for me.

But the live "spontaneous" entertainment that has been shown? That looks pretty spectacular -- especially the fact that the flying Spider-Man is there, apparently combined with a live-action set-up (hopefully it lasts longer than the ceiling that used to collapse in Indiana Jones and the Temple of the Forbidden Eye when Mara would shoot it with the eye beam). But the flying Spider-Man alone is one IMPRESSIVE feat that I would love to watch in person.