June 2, 2021, 10:00 PM · Ever since the end credits scene of Marvel's original Avengers movie, Disney theme park fans have been asking for some Marvel-themed shawarma. In Avengers Campus at Disney California Adventure, they finally will get their wish. But the shawarma is just the supporting act to an Ant-Man and The Wasp-themed restaurant that will once again test how far theme parks can go with their food and beverage offerings.

The conceit of Pym Test Kitchen is that Cassie Lang has started using Pym Particles to change the size of food. That's given Disney's chefs license to play with the shape and scale of a new menu, creating giant pretzels, miniature breads, and other visually unexpected fare. Chef Jeremiah Balogh talked me through some of the menu items from Pym Test Kitchen, the Pym Tasting Lab bar next door, and the Shawarma Palace food cart across the street.

The only item I got to try at the media preview this week was the chicken shawarma. It was... okay. Living in a big city such as Los Angeles, I can find plenty of shawarma joints that will serve me chicken sliced fresh off the spit, so these wraps from a food cart's warming drawer can't compete with them. But the accompanying coconut yogurt-tahini sauce with pickled vegetables was amazing and made the combination my new go-to for quick food at DCA. I didn't get to try the Impossible Victory Falafel, also available at Shawarma Palace, but others at the preview said it offered a little more spice than the chicken.

Beyond the food, though, I enjoyed some of the visual touches at the bar and what they say about the Pyms and the Langs. Check this out: 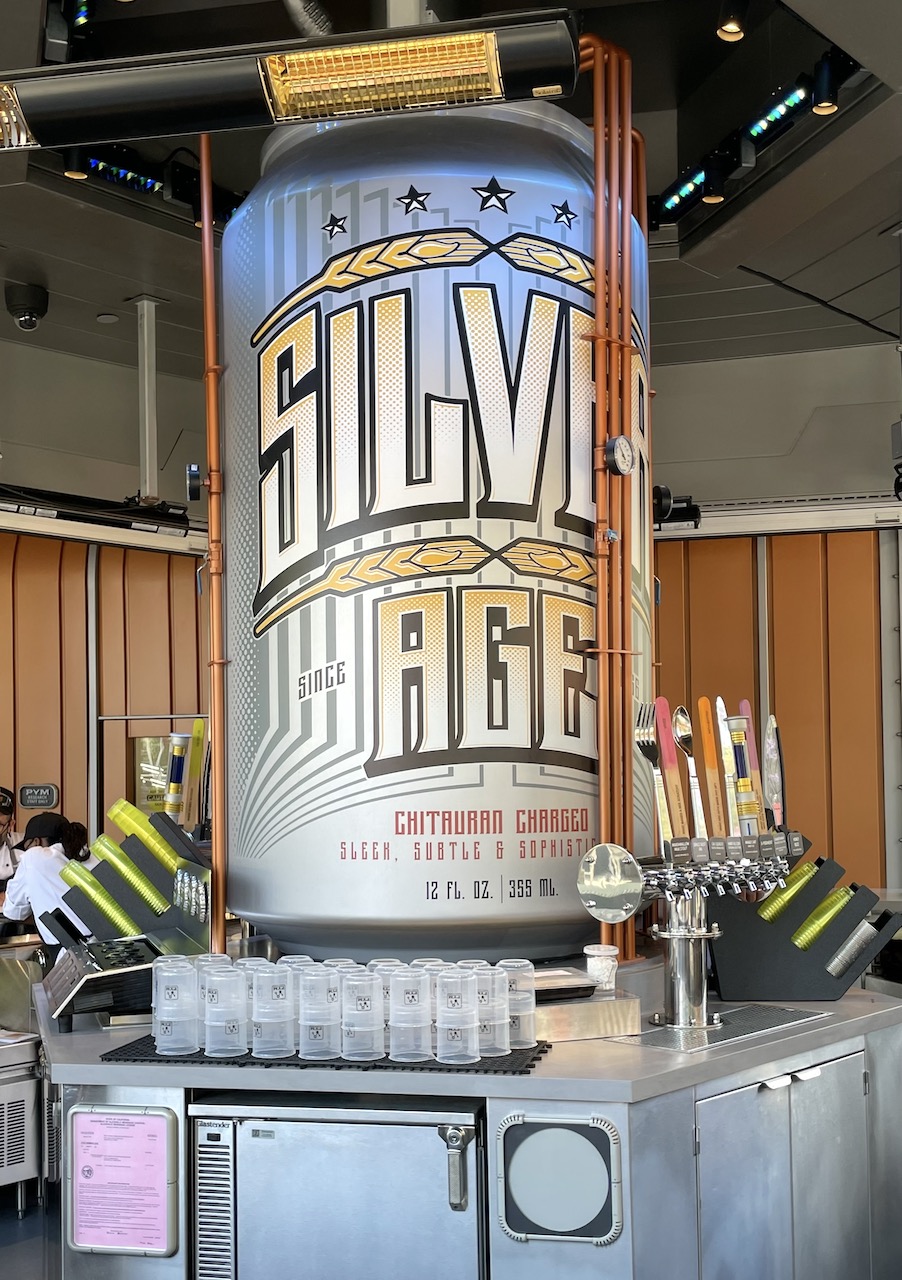 I wonder what the Pym Tasting Lab's beer distributor thinks about them just enlarging a single can of beer to stock the bar's taps. Maybe it's a smart business move, but given state liquor laws, I can't imagine that this wouldn't violate Scott Lang's rear end right back to San Quentin.

And it looks like the crew saved a few bucks on lighting, too. 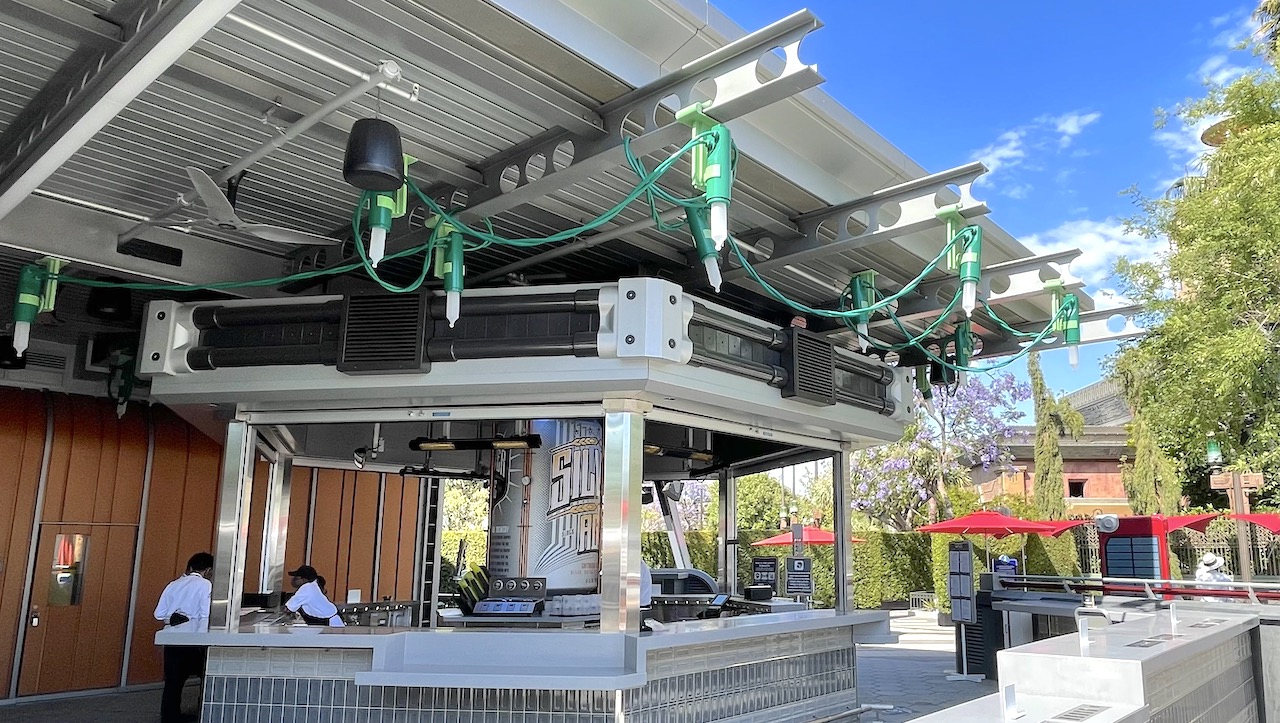 Those repurposed Christmas tree lights reminded me for a moment of the A Bug's Land playground that Avengers Campus replaced, with all of its oversized items. Playing with scale is a well-tested way to appeal to kids, who often live in frustration with the big world around them. But it's also a classic nostalgia play for adults. With the Ant-Man franchise, Disney had a easy way to pay homage to this site's former residents while also appealing to generations of Marvel fans.

The visuals work. Now we will just have to see if Disney's new Pym restaurant and bar pass the taste test.

For more on Avengers Campus, please visit our other stories:

I like the design of the kid's meal trays, but the rest of the presentations shown in the video aren't as visually striking as I expected. The chicken sandwich has that visual appeal, even though it looks like a pain to eat, but the rest of the food offerings don't really scream "mini" or "maxi". The pretzel isn't any bigger than the giant pretzels you can find at major brew-pubs (Gordon Biersch sells one on a hanging stand that is even bigger than Disney's) or authentic German beer halls.

I really like the "beaker" cups used here, though I expect them to run into the same problem as the cups initially used for Blue Milk, and they quickly run out and resort to generic-looking plastic cups. Also, without straws those drinks with boba pearls will be frustrating to enjoy. Drinks with boba pearls are best consumed through a large diameter "milkshake" straw so you can grab a pearl along with some of the liquid. Without a straw, the pearls will be tricky to consume when sipping on the rim of a cup, leading to the pearls sinking to the bottom and congealing into a lump of "sludge" after all the liquid is consumed. I'll take a couple of those Molecular Meltdowns, but did Disney reveal which beers are being served here? Galaxy's Edge and Pandora put the breweries involved front and center, but I don't see any of that information here. Even if they are using custom brews, Disney should acknowledge the breweries producing these potables.

I don't understand why they're putting "Impossible" protein in a falafel. Falafel is already a vegan product (made predominantly with chickpeas), so adding a meat substitute kind of undermines it, and actually would make the item less desirable for vegans and vegetarians, and makes the product less healthy (most faux meat contains massive amounts of sodium and fat to simulate the taste of meat).

For me, a shawarma is all about the wrap. What type of wrap are they using here? Is it more like naan, pita, flatbread, or tortilla? Also, if these are being pre-made and stuffed into a warming drawer before serving, I'd be more concerned about the quality and texture of the wrap than the spiciness and flavor of the protein.

Well said, Russell. A falafel with impossible meat isn't a falafel, it's a meatball sandwich. I applaud them for including vegetarian items, but that's just a very strange choice.

The wrap was a flatbread, and yeah, it had spent too much time steaming in the drawer.

Impossible has sponsorship rights for the land, so I am guessing that the decision to use Impossible protein in the "falafel" was driven by that contract. And speaking of Impossible, getting a Disney source to reveal a vendor's identity while a camera is rolling is like getting one of them to say the word "Marvel."

I guess "Marvel" is the new "I don't know" in the Disney lexicon.

Inside Look at Avengers Campus Merchandise