August 19, 2021, 10:32 AM · The Disney Cruise Line will introduce a new interactive adventure on its Disney Wish when it sets sail next summer.

"Disney Uncharted Adventure" will be an augmented reality experience through the Play Disney Parks app that poses the question, "If wishing upon a star makes your dreams come true, what happens when that star goes missing?"

The adventure will begin when you book a trip on Disney Wish. That will unlock a special section in the Play Disney Parks app, just for Disney Wish guests. There, Captain Minnie will welcome you and set up the adventure, in which your mobile device will become a "magical spyglass" that you can use to see the wishing star and other elements of the adventure.

"With the Disney Wish, we have an incredible opportunity to immerse our guests in the worlds of their favorite stories in surprising, interactive and completely unique new ways," Davey Feder, software product manager, Walt Disney Imagineering, said. "With Disney Uncharted Adventure, we’re literally putting the power in our guests’ hands to become the heroes of a grand adventure that can only be done on a Disney cruise."

Once on board, guests can use the app and your camera to see the wishing star and constellations themed to various Disney and Pixar franchises in the night sky, via augmented reality. Then it all goes terribly wrong, lightning shatters the wishing star, and Captain Minnie asks your help to find the pieces of the wishing star. 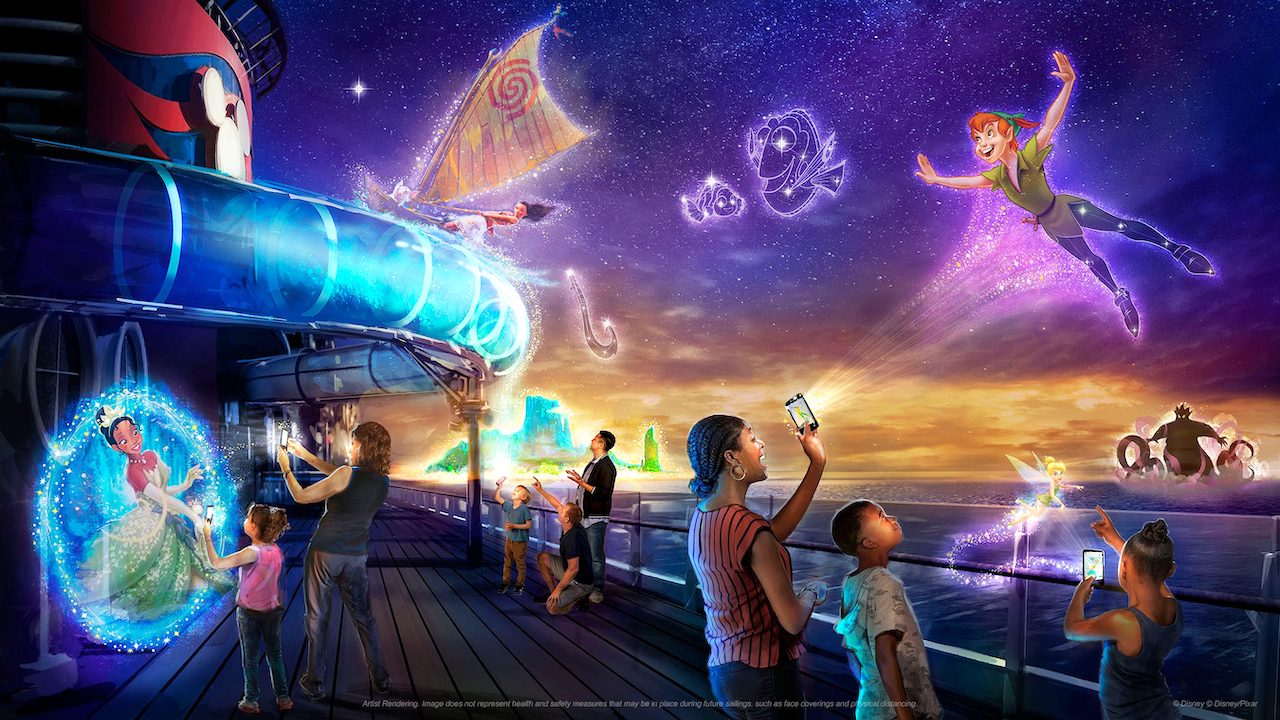 That sends family on four different quests around the ship during their voyage, themed to Peter Pan, Moana, Princess and the Frog, and Finding Nemo. Families can do these at their own pace. On each quests, guests will be directed to some sign or object on board, which will come to life via their mobile device. That will unlock both an interactive experience and some sort of gameplay, in which the family can work together to accomplish some task that leads you to finding the missing piece of the star.

"Guests might admire a beautiful painting today without realizing that, hiding right beneath the surface, there’s a hoard of mischievous Kakamora from the world of Moana just waiting to escape and wreak havoc on the ship," Feder said. "A digital menu board might showcase what’s for lunch in the afternoon, but later it will host a cooking lesson in Tiana’s own kitchen."

The idea is that the experience will be more communal than competitive, and designed to keep everyone focused on the physical object in a "heads up" way, rather than looking down at their screens.

The adventure will wrap up with a scheduled finale toward the end of the cruise, in which all participants will come together for a final battle with a well-known maritime Disney villain to restore the wishing star. This will take place in a large venue, with a live host and interactive media on screen.

The Disney Wish will sail its maiden voyage on June 9, 2022 from Port Canaveral with three- and four-night cruises to Nassau and Castaway Cay.

Disney is really doubling down on the A.I. They're pushing it as part of Disney Genie, it's forming the basis of interaction on the Halcyon, and now they're going to foist it on DCL guests. What research does Disney have to suggest people really want this while on vacation?

Considering how poorly DataPad has been accepted in Galaxy's Edge, I have a hard time believing that Disney will improve their interactive and AR experiences to the point where guests will willingly participate over the course of a multi-day voyage.

WDI said that you don't have to do any of the quests to go to the finale show. Which, I suspect, is the route that many families will end up taking.

Between this and the new genie nonsense, if you were conspiracy-minded you might think Disney somehow benefits from getting people to stare at their phones all day.

I mean, as a parent of two kids, I work hard to keep them from being lost in their phones. When we were at Disneyland two weeks ago, on the Guardians ride, we watched a family with two kids who watched their phones through the entire Rocket pre-show. Why did you bring them to Disneyland, you could have just left them on their couch with their phones!

Far, far too many people are addicted to screens, staring at their phones for 10+ hours a day. They don't make art, they don't play sports, they don't even party with their friends. And now here comes Disney pushing even more reasons to stare at a screen. No thanks!

Flip side to that is that if the kids are coming to the cruise conditioned to be using their phones all the time, something like this provides a transition that lets them start with the phone, then move their attention to the ship and surroundings.

This assumes that the interaction between the phone/AR and the ship/surroundings is any good. If DataPad is any guide, kids will bat 2 eyelashes at this and then go back to YouTube.

If Disney wants to make AR appealing, they've got to do a much better job, and not simply approach it from a "if we build it, they will come" mentality that they've used so far. There have to be some real-life rewards/benefits to exploring the AR world.

I hear you Robert, but it's kinda like saying "kids are pounding sugary sodas all day so we lure them into the cruise ship with sugary soda," haha.

Midship Detective Agency is pretty neat, and a more interactive version of that could be really cool. MDA already moves you to different interactions to manage crowds - something Sorcerers always had a problem with. I guess I don’t have a problem with phone interactions on vacation.

Looking to Save Money on Disneyland Tickets? Here's How