Soar Over the Wild West at FlyOver in Las Vegas

September 1, 2021, 8:34 AM · The director behind Disney's Soarin' Over California is back with a new production - this one flying beyond the borders of the Golden State.

"The Real Wild West" debuts today at the new FlyOver in Las Vegas, located next to the Hard Rock Cafe on Las Vegas Boulevard, across from Park MGM. The production features aerial views not just from California but also Nevada, Oregon, Washington, Montana, Arizona, New Mexico, and Utah.

"The attractions that we develop are focused principally on live action. We're not synthetically trying to create locations," said Creative Director Rick Rothschild, who wrote and directed the original Soarin' film that debuted at Disney California Adventure in 2001. "It's then really what are the gifts that Mother Nature has provided?"

To capture Mother Nature's gifts across the wild west of the United States, FlyOver crew used an 8K Red Monstro camera with a spherical lens, capturing 60 frames per second. Of course, the highest definition camera can capture only what's in front of it.

"I can't say enough about the finding the right pilots," Rothschild said. "This show had multiple pilots because of the broad areas and different times of year we were shooting, and finding the talent that can be precision, and not precision in a mechanical way, but truly understand how to have the artistry as well as the technical talent to fly their helicopter like a bird - all of the pilots that [we] got should be commended for helping us get the shots that are in the movie." 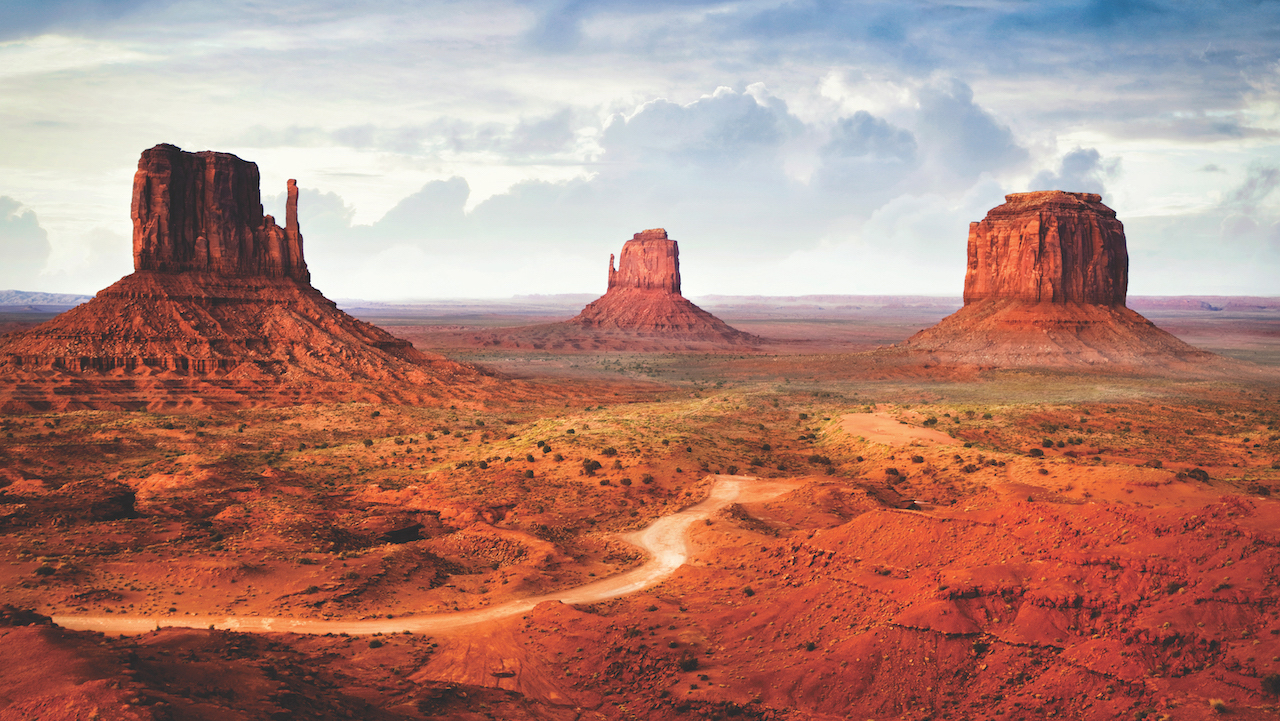 Monument Valley is one of dozens of locations featured in "The Real Wild West." Photo courtesy FlyOver in Las Vegas by Pursuit

"The premise that we started with - and that I started all the way back with Soarin' - is the true belief that I wasn't the only one in the world who loved to fly," Rothschild said. "Peter Pan was my favorite childhood story; I guess there's a reason why. That idea of being free to see the world in unique ways drives this concept, and has driven this concept, from the beginning."

But it's not just about flying over well-known landmarks. Rothschild and director Dave Mossop aimed to tell a story about the diversity of American west.

"The visual experience and the aural experience in combination are an emotional poem that requires no words," Rothschild said. "The whole aural composition - the aural environment that you're in - is immersing you in the emotion that the visuals are conveying."

A multimedia preshow from Moment Factory leads visitors into one of two show theaters, outfitted with 52.5-foot spherical screens from Kraftwerk, multiple laser projectors, and a ride system from Brogent Technologies. Here is the trailer for "The Real Wild West," courtesy FlyOver developer Pursuit.

Tickets for FlyOver in Las Vegas start at $34 for adults. A double feature that also includes FlyOver's Iceland film is $54, and a "Double Ride and Drink" package costs $59. Tickets are available via the FlyOver website.

The not-so-subtle dig at "synthetic locations" in Soarin' Around the World is noted (and perfectly justified, IMHO). Trailer looks impressive. I wonder how long the attraction is compared to a typical Soarin flight... how much "flight time" do you get for your $34?

"Double Ride and Drink" - So Vegas - to be honest, we've ridden the High Roller three times solely because of the "drink pod".

However, I'm not sure about these stand alone attractions. We passed on the one at Mall of America a few years ago and more recently didn't even think about experiencing the one in Pigeon Forge. I just don't see the value in these "one-off" attractions, because it's a costly outlay for what is a relatively short and limited experience. Yes, they're spectacular, and one based exclusively on natural wonders of the American West is incredibly appealing to this particular geologist, but I just cannot see paying $34 for a 10-minute "ride" (more of a movie with very subtle movements), even in the environment of excess that is Las Vegas.

Also, hasn't Las Vegas learned its lesson trying to appeal to families? There are tons of shots of kids/families in the trailer for this attraction, and while I'm sure Sin City could use some extra influx of visitors to make up for the losses over the past year, they should know by now that it's just not worth it to chase revenue from the family demo in a very adult oriented tourist market.

Agree, John. There's a reason the original Soarin' is still more popular--it's real! Don't need a fake elephant family to get the sense of majesty that a savannah flyover scene provides. Don't need better transitions between scenes, either. Another nod to Soarin' is the little hang glider in the FlyOver logo which is very similar to the one in the Soarin' logo. Not the same, yet caught my eye (similar shape, both red), and I can see Disney's lawyers questioning it.

@russell They market to kids because they know that most rational adults aren't going to drop $34 a head for a five minute ride, but a beleaguered parent just might as an incentive to the kiddos, haha. "If you guys will let your mother and I sit here and enjoy the sunshine for 15 more minutes while we finish these drinks, then yes, I will take you on the GD soarin!" YAAAAY!!!

I never even realized Soarin was now CGI, that explains so much.

My point isn't the psychology of parents ceding to the wills of their children, it's the entire premise of bringing kids to Las Vegas. The city went through that charade 20 years ago, and I thought cooler heads prevailed and came to the conclusion that Las Vegas is NOT a family destination.

Also, if you didn't realize that the original Soarin' had CGI (the hidden Mickeys on the golf ball and fireworks are dead giveaways of post production CGI), then Soarin' Around the World must be a "fool me once..." moment for you, because the application of CGI in the more recent film is even more obvious.

Frankly, I don't mind the use of CGI for material like this, because when done right it helps to clean up the inevitable mistakes/gaffes that will happen with a limited production schedule and normal human error. Also, when artfully and cleverly done as in the original Soarin' film, it blends into the background and virtually invisible to the average viewer. However, when it gets too crafty and clever for its own good, the CGI makes pretty realistic looking images appear very fake (hyper-real), and takes the audience completely out of the experience because they're contemplating how much of the previous shot was "real" instead of soaking in the images of the next scene. That's how I feel every time I see Soarin' Around the World, even though the actual photography (minus the CGI) is mesmerizing and other-worldly when compared to the original production captured with inferior equipment. The CGI in the newer film isn't about "cleaning up" the original footage like it was in the first Soarin', it's an unnecessary attempt to breathe life and character into images that should be able to stand on their own, especially given the subjects, equipment, and the years of experience in nature/documentary photography accrued by the crew tasked with capturing the images.

I think it's a mistake to assume this ride is just for families with kids. Now that marijuana is legal in Las Vegas, I'll bet a lot of stoned visitors will want to ride it.

This is in a location where lots of families with kids visit already. M&M, Coke are nearby. Hershey world across the pedestrian bridge.
It is priced stupid high even by vegas standards for a family of 4. I'm sure rent on that space has to be nuts. Good luck midweek attracting visitors. Weekends will get cross traffic from the sugar stores.