September 29, 2021, 11:26 AM · You've overcome incredible odds to become a renown chef, won an Academy Award for the effort, and then revived Disney's worst theme park with its first world-class attraction. So what are you going to do now?

On the ride, guests are shrunk to the size of Remy then follow the rodent on a chase through a Paris kitchen, as Remy seeks to fulfill his dream of becoming a great French chef. 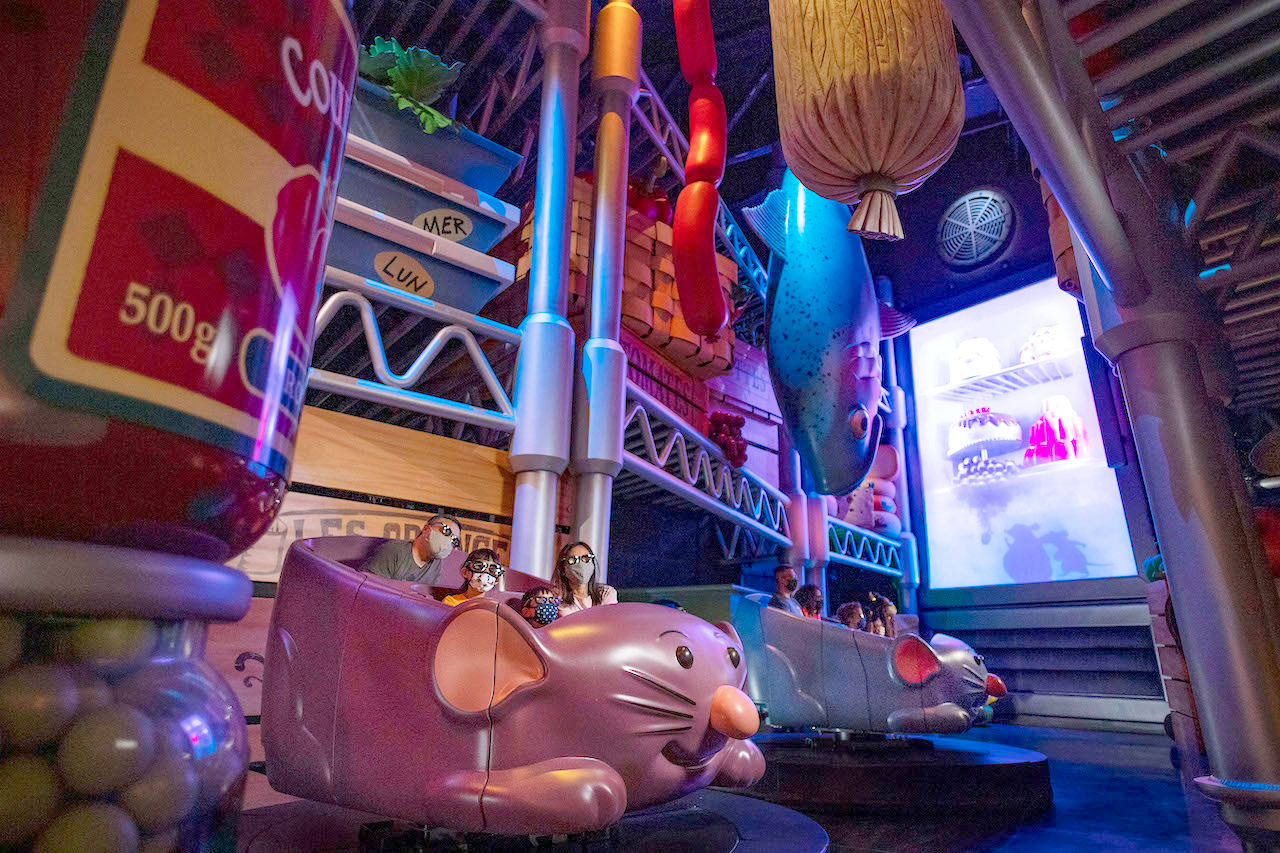 Ben Mills' review of the original 2014 installation at Walt Disney Studios Park at Disneyland Paris stands, as this is pretty much the same experience. Here are some highlights from the Epcot version:

Even though this is a motion base dark ride, there is no height restriction, and Disney is promoting Remy's as an adventure for the whole family. It does play much tamer than Spider-Man and Transformers, so Remy's during its preview period has been drawing Disney World passholders who might never have considered those motion base attractions from Disney's rival. But Remy's still can be a bit much to follow visually if you're not used to watching media on motion base rides.

The moment when the villain Skinner lunges at our heroes might frighten sensitive riders, too. (Heck, the whole experience would be a nightmare for anyone with a rodent phobia.) Yet if you're okay with the thrills that motion base dark rides are typically designed to deliver, the Skinner moment is the ride's highlight - a great moment when narrative, visuals, and ride mechanics come together to create a unique experience.

In all, Pixar and Ratatouille fans should welcome this new opportunity to spend more time with Remy and friends, and all Epcot fans should be happy to see another people-eating dark ride added to the park's line-up.

So, watching that video, is the ride just riding around and watching things on giant screens? I see there are some practical sets, but everything else is screens?

Yes, it's mostly screens, but with a practical set opening on the Paris rooftops and the practical scene through the kitchen refrigerator.

Enough of the screen complaints thecolonel!!!

Screens are an integral tool in an attraction designer's arsenal, and are being used in more interesting and unique ways than ever before. Whining about screens in the year 2021 is about as lazy as the critiques claim of the ride designers.

News flash - This ride is a clone of an attraction that opened in 2014 based on a CGI movie from 2007, and still contains a number of real staging elements and theatrical lighting/effects to frame the projected images. Take your screen trolling comments back to the '00's where they belong.

Nice addition to EPCOT. Now let’s get GotG and the PLAY pavilion open. Then move on to the redo of Spaceship Earth, circle back to Mary Poppins in the UK and bring in Coco, Inside Out and Soul.

Shove off boomer. I'll post my opinion as I please.

But this is lazy, the equivalent of putting your kid in a shopping cart and pushing her around the Best Buy TV department. And 100%, certain of the screens in ROR (e.g., the stomtroopers firing down from the bridge) ruin the illusion, and are the weakest part of the ride. Same is true for the screens on the Avatar boat ride. The pre-show on Spiderman Webslingers is weak screens, the ride itself is more lame screens, just like Midway Mania, aka Wii.

Bottom line: if the ride design requires screens, great--there would be no way to show the space battle outside ROR without using screens. But if you're using screens to save money on animatronics and other physical creations, it's a cop out, and it sucks from my perspective.

Consider that Disney's push toward projection mapping basically admits that 2-D screens are inferior, otherwise why go to all the trouble to project images onto 3-D objects?? The new projection-mapped sections of Snow White are 1000% more magical than a giant flat-screen TV showing a video of stormtroopers shooting at you.

So in thecolonel's imaginary world, every attraction should be a $500 million custom platform e-ticket. If you think the recent cash grabs by Disney were bad, imagine if every new ride had dozens of lifelike animatronics costing tens of millions of dollars to design, construct, install, and maintain along the course of a unique multi-million dollar ride system.

While Ratatouille is being billed as a "major" addition to EPCOT for WDW50, realistically it's a D ticket that probably should have opened last winter or this spring if not for the pandemic. Trying to criticize shortcuts and cost-control measures as part of Disney's effort to boost attractions at the World Showcase (a long-overdue initiative) is self-defeating. This predominantly screen-based ride is a HUGE improvement for the ride desert that is the top half of the World Showcase. While Disney certainly could have spent some more money to develop a unique version of the attraction with less reliance on screens, parks should always seek balance in their lineup. With GotG:CR on the not so distant horizon (was probably originally intended to open in time for the first half of WDW50, not late next year - at the earliest), an e-ticket level attraction simply wasn't in the cards this time around.

Now, I'm usually down on screens too but this looks much better than other ones where it really is nothing but screens. I'm in the minority, I know but never really liked Toy Story Mania for mostly the screen stuff but this looks very good as the original was a hit.

Personally, I've liked how World Showcase isn't so ride-heavy. I think putting in a "Mt Fiji" style roller coaster would mar Japan's lovely ambiance although I love Norway and Mexico boat rides. For this, France has needed something (seriously, it's the same movie since the park opened) and this gives Epcot a nice boost for the anniversary.

thecolonel made a reference to Circuit City when describing Na'Vi River Journey while on their anti-screen rant over on the Donkey Kong story, so I think you're definitely right TwoBits, they belong back in the '00s.

Behave, everyone. If people keep sniping at each other, Disney's gonna punish us by bringing back Journey Into Your Imagination (speaking of the year 2000).

No one wants that.

Actually, aside from the Imagination change, 2000 was one of the best WDW trips I ever had so wouldn't mind replaying it.

@Robert Niles, don’t even joke about that. It’s too soon!!

This popcorn is delicious!

I like what I saw on the video, and this looks like a solid C Ticket attraction, perfect for World Showcase.