"Our vision is to position Yas Island as an international destination, and we want to visit the top of the list as one of the preferred destination for a family to enjoy entertainment and leisure," said Mohamed Al Zaabi, the CEO of Miral, the developer of the Yas Island resort. 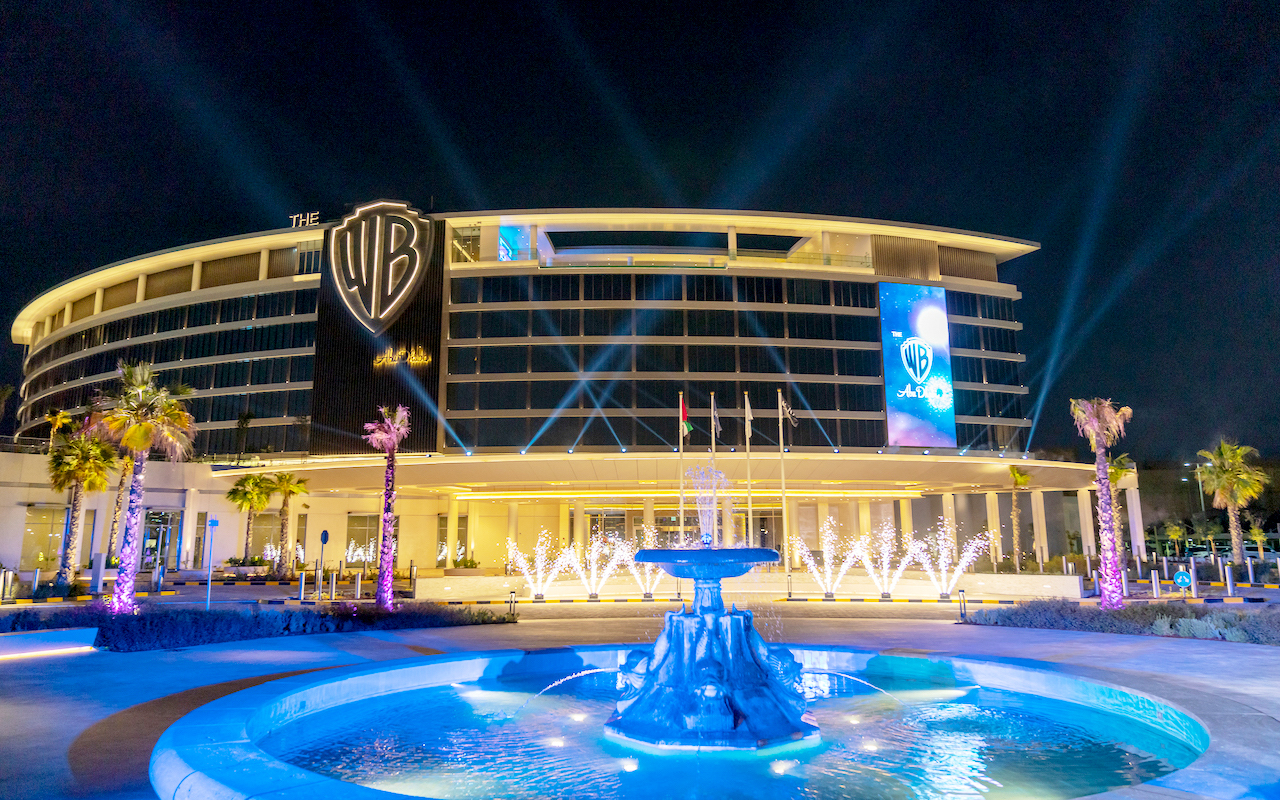 "Warner Bros. is a key player," he added. "They have a rich library with very strong IPs, and their IPs are very much well known in this region. And when I say this region, I don't mean only UAE or Abu Dhabi, I mean five hours' flight from from Abu Dhabi, where you have almost 60% of the population on this planet."

"We wanted something named Warner Bros. Hotel to have that feeling of being new and alive and different and vibrant," van Roden said. The hotel, which is part of Hilton's Curio Collection, offers 257 rooms, each with curated artwork reflecting the studio's history of storytelling. But the facility remains a hotel - and not a sleep-away theme park.

"You don't want to be sleeping inside of an immersive experience" van Roden said. "It's got an influence of the of the brands, but then it's a pleasant leisure hotel experience and first-class leisure experience." 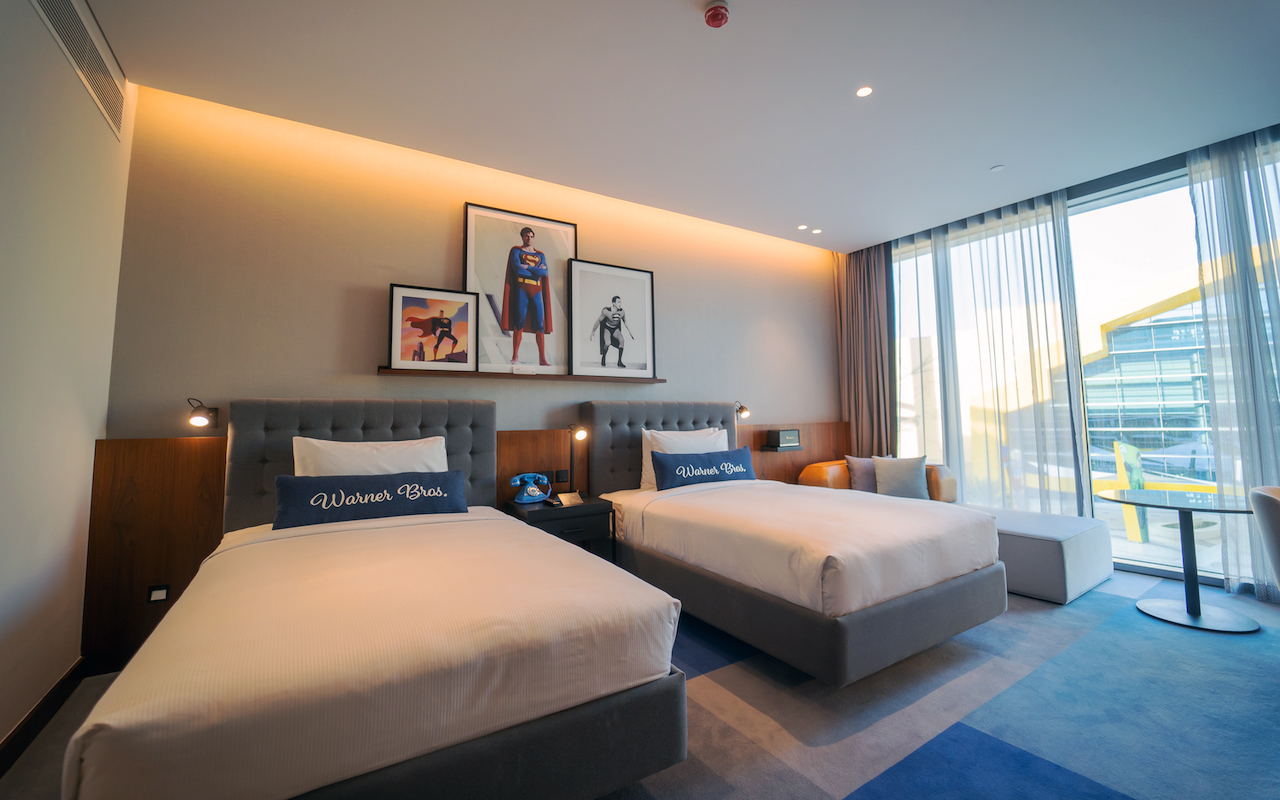 Guest room, with a view of Warner Bros. World Abu Dhabi from the window

Yet that does not mean the hotel is simply a brand statement, van Roden said. Warner Bros. and its partners worked to design the hotel as a "living, breathing content piece."

"The group came back to us with this idea that there would be these multiple content screens," van Roden said. "One massive five-story screen on the front of the building, which is pretty ambitious, and one up on the roof, poolside, in what they call the matinee, and then the columns in the lobby." 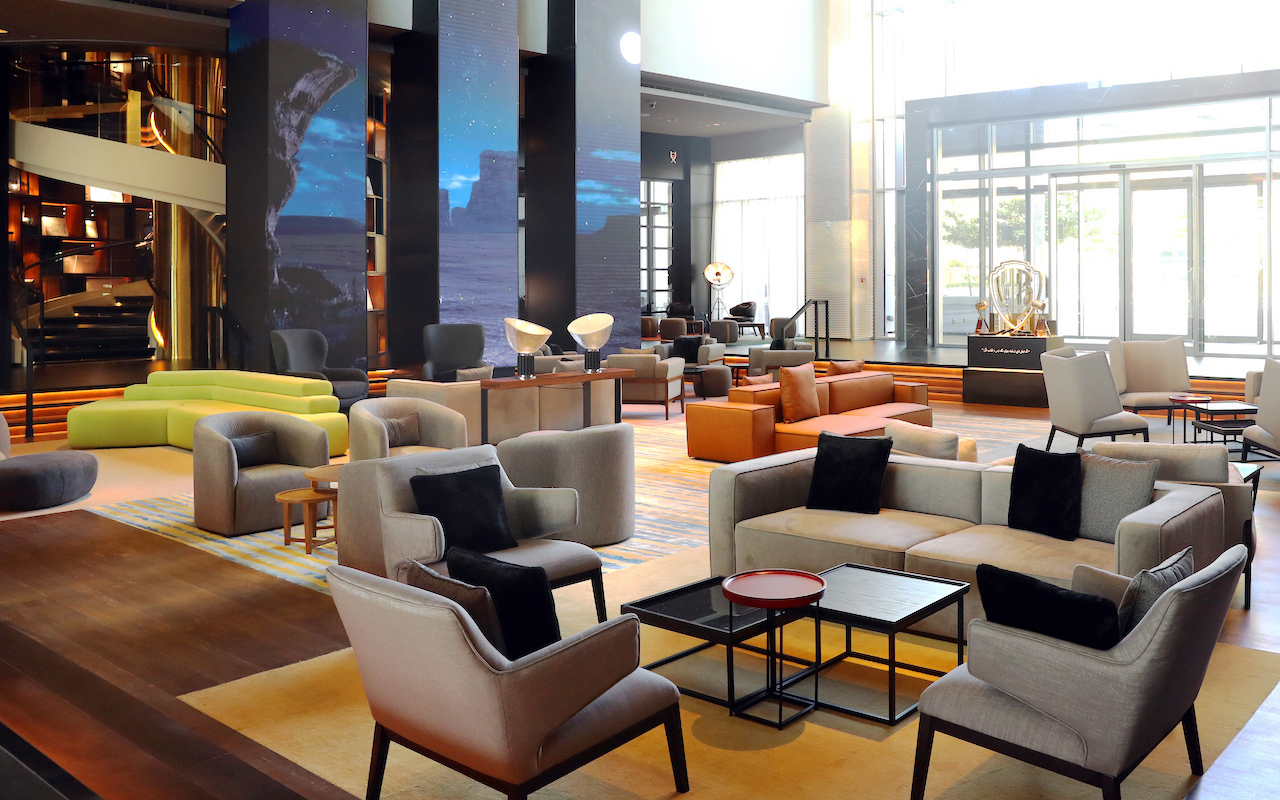 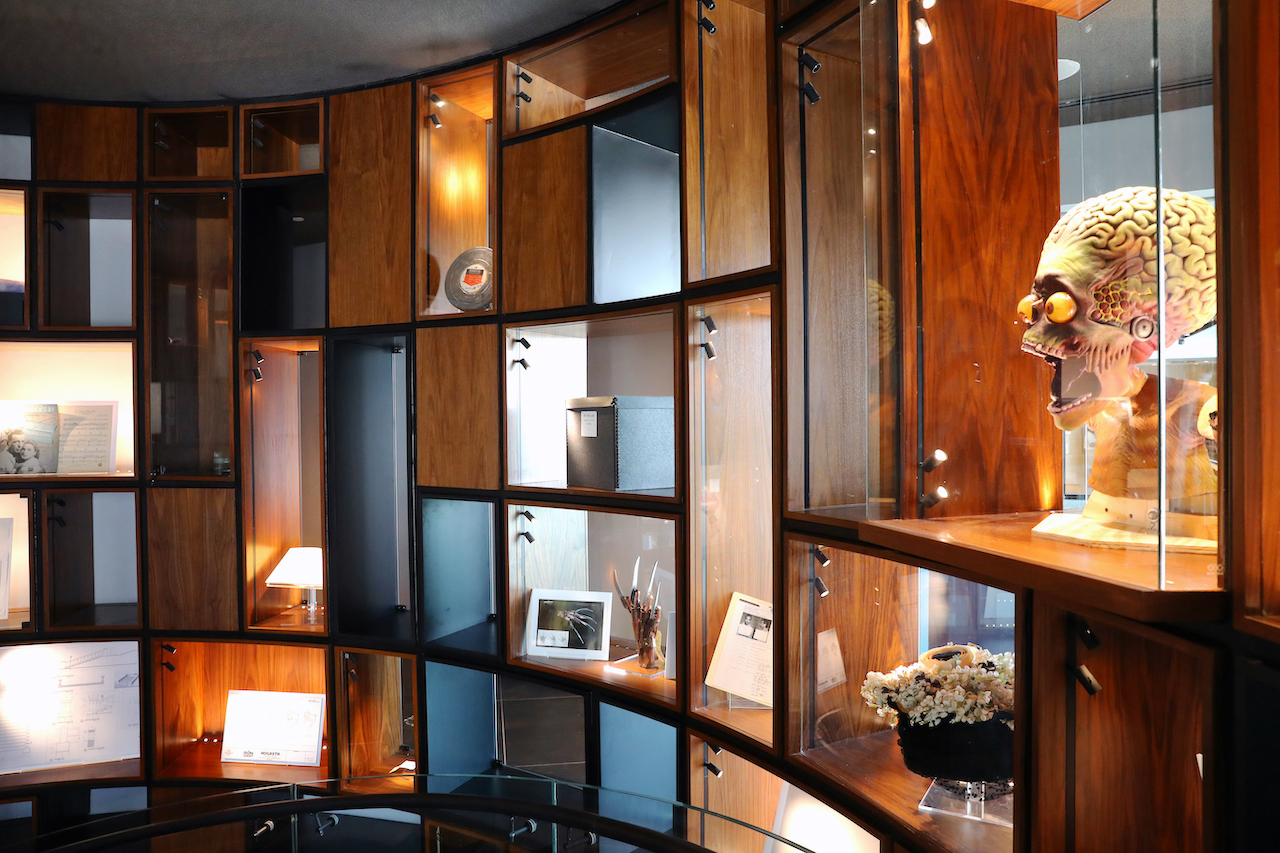 A portion of the Warner Bros. archive on display at the hotel 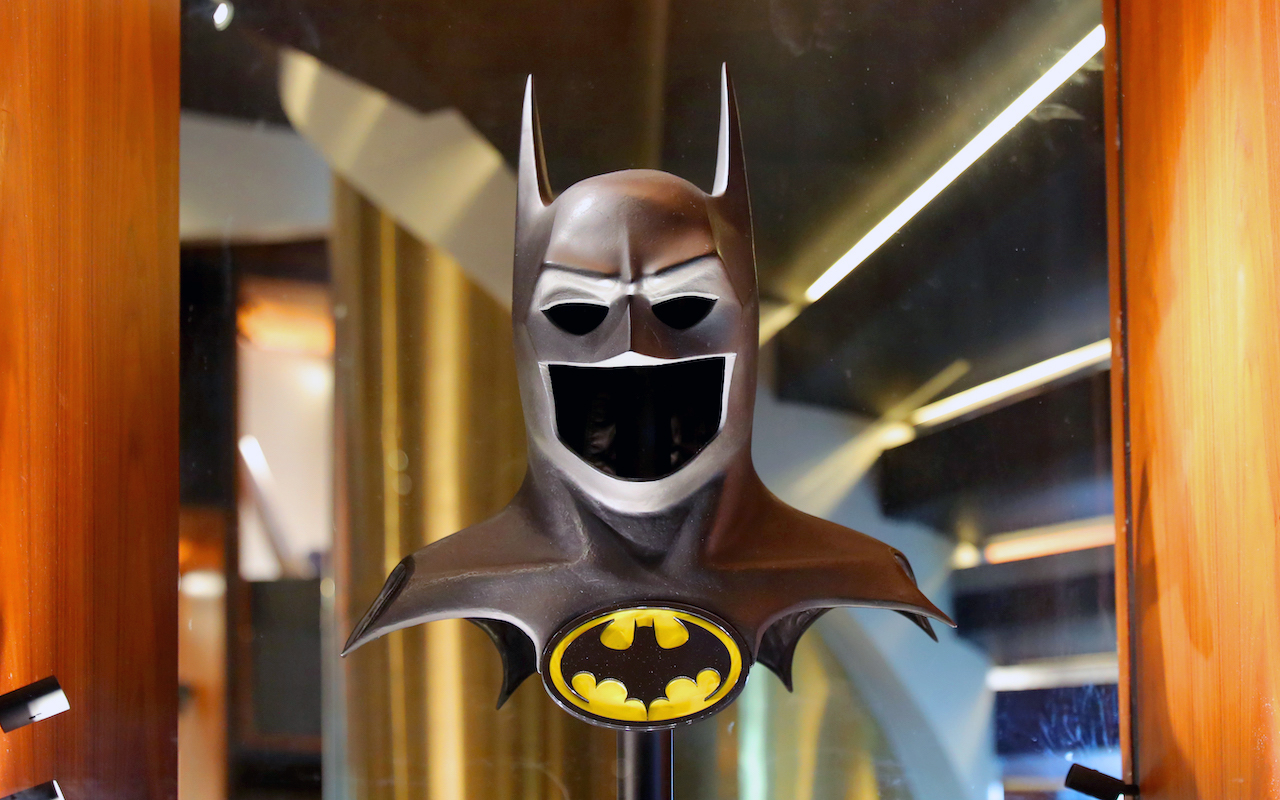 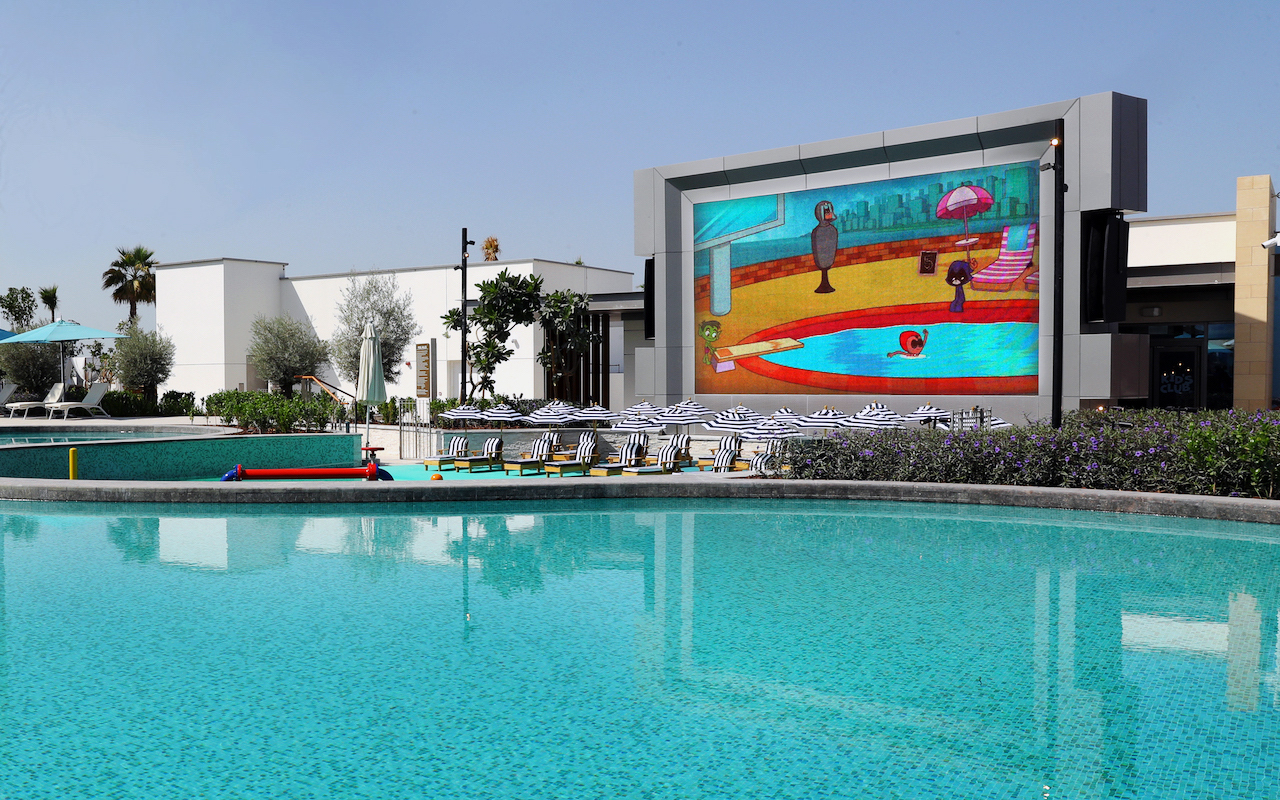 "They have a sense of excellence and they are they are really astute at that - all the way to the top with Mohamed Al Mubarak [Chairman of Miral], who himself is a fan and collector of comics and a collector of art and an artist himself. It trickles down from the top."

"When we saw the outcome of the creative content, that was a moment of wow," Al Zaabi said. "We felt so happy. We felt, 'yes, we cracked it.' We did it, and it will be a unique experience."

I find it interesting that as other companies are attempting to make the hotel/resort experience more immersive and integrated into the theme park experience, the creators here have pointedly stated their desire to make it more of a "hotel". That just seems like an odd statement in today's market where saturation is so high that everyone has to promote their uniqueness to capture additional market share. Why would a visitor choose to book a night at this WB Hotel if it's just a "hotel" that can be found at numerous locations nearby? While I'm sure WB Hotel guests can enjoy the convenience of proximity to the parks, and probably some other benefits like integrated booking and package discounts, publicly stating the goal was to make this a "hotel" and not a themed resort seems really out of touch with the marketplace. Perhaps the goal of this project is to compete directly with nearby hotels (which would probably limit the rates they could charge) and to not link stays here with the theme parks, but the deliberate move to make this more or less a generic mid-range hotel seems to be short-sighted.

I would not call this a "generic mid-range hotel" by any stretch. From the images I have seen, it appears very much a higher-end property with a contemporary aesthetic. What it is not is "cartoon-y," which is how I interpret what Al Zaabi and van Roden said. The theme park next door delivers that.

And the photo above from the guest room shows just how close that theme park is. The prime appeal here is location. You can walk to Warner Bros. World and the water park, and Ferrari World and the Yas Mall are just across the street.

The property seems to me to be a very interesting design statement for WB Themed Entertainment. They're clearly looking to differentiate from Disney and, to a lesser extent, Universal, by creating a upscale destination that is accommodating to children and families with children without focusing sharply on the kids.

Perhaps I was a bit harsh with "mid-range" (finishes appear to be "mid-range" when compared to the overall Abu Dhabi market, which is decidedly on the luxury end of the spectrum), but to me this looks like a lesser version of the Hard Rock Hotel at Universal Orlando - with toned down theming and swapping out art, displays, and memorabilia themed around music to WB TV/movie themed stuff.

To me this looks like a deliberate step backwards (Hard Rock Hotel opened 20 years ago) in an attempt to broaden the appeal beyond just the theme park audience. However, that doesn't really make sense to me for a relatively small hotel (just 257 rooms) where theme park visitors will make up a majority of the guests.

The comparison that jumped into my mind was the Art of Marvel redesign that Disneyland Paris recently opened for its Hotel New York. This seems very similar with its mix of archive material, themed art, and contemporary urban finishes.

I also would like to see how this hotel compares with the first Universal Studios themed hotel, which just opened at Universal Beijing Resort.

Sunset Allows the Holiday Spirit to Shine at Disneyland