The World's Longest Wooden Coaster Gets Even Longer

March 30, 2022, 1:20 PM · The world's longest wooden roller coaster is getting even longer in 2022. Kings Island today detailed its winter-long retracking project for The Beast, which has resulted in lengthening the world-record coaster from from 7,359 to 7,361 feet.

The project began in November as crews refurbished 2,000 feet of the coaster's track. The main focus was re-profiling The Beast's first drop, steepening it from 45 degrees to 53 degrees. The change allows the coaster to enter the ensuing tunnel lower, allowing for a smoother transition through the tunnel and into the ride's second hill and drop. 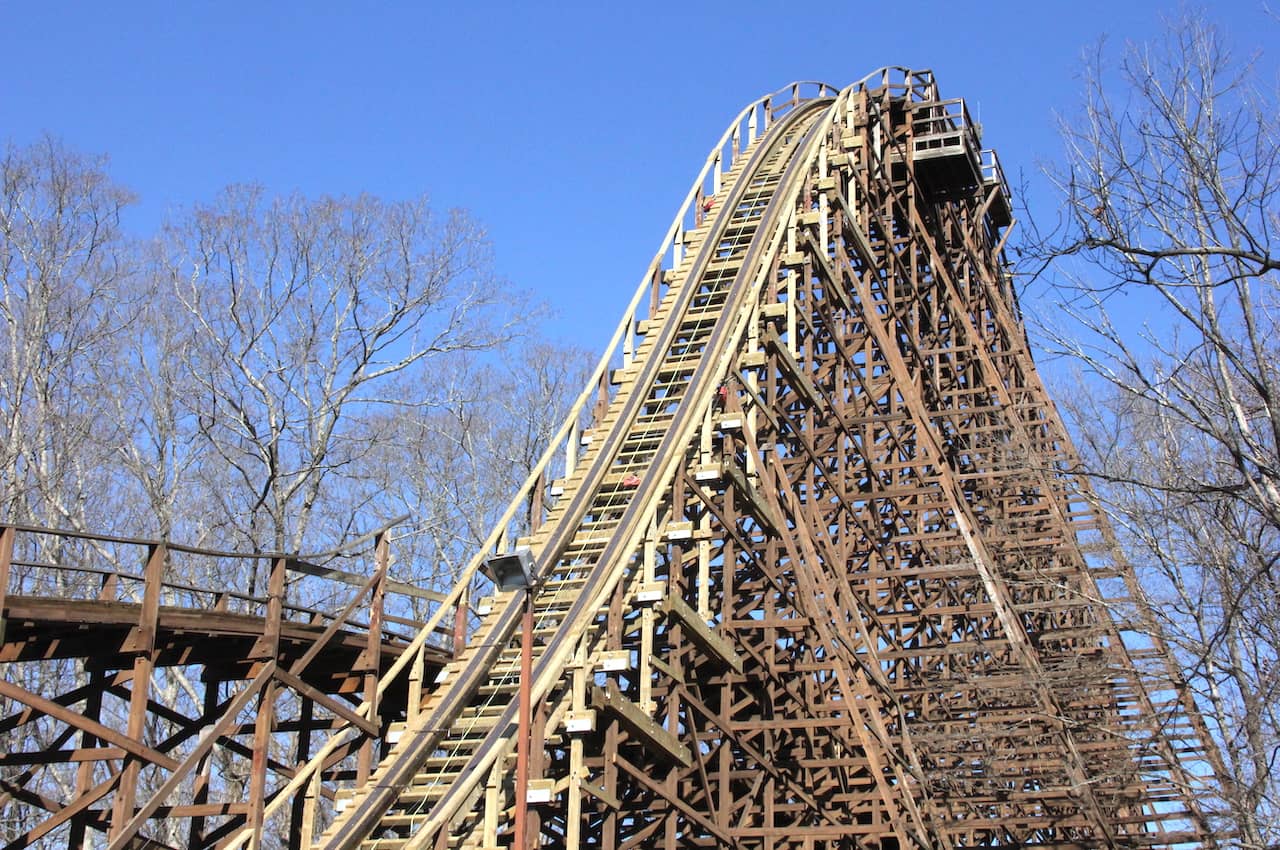 The project is expected to be complete in May. 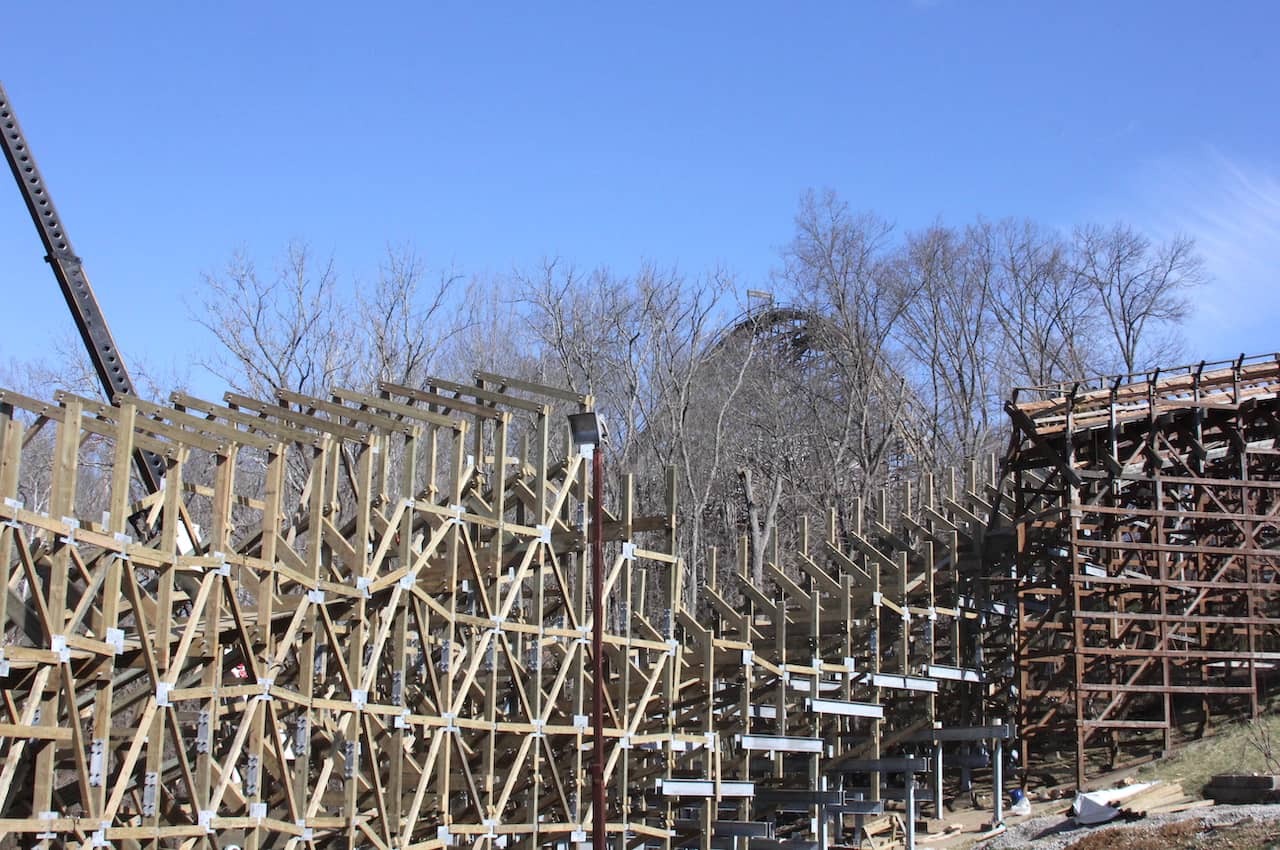 Here's the new lumber being installed on the entry to The Beast's 540-degree helix.

"When you look at roller coaster records, they're being beat all the time," Kings Island Vice President and General Manager Mike Koontz said. "But there's one record that no park in the world has been able to beat for more than 40 years, until now, and that's the record for the longest wooden roller coaster."

We won't have a POV of the new track until it's complete (of course), so until then, enjoy the current front-row, on-ride video of The Beast, which shows off the terrain coaster's four-minute-plus ride time, three tunnels, and eight banked turns.

Kings Island opens for its 2022 season on Saturday, April 16. Update: Our travel partner now has discounted tickets, with savings up to $37 a day, available on its Kings Island Tickets page.

I’m glad they’re taking care of one of the great roller coasters in history, but I’m not a fan of this change. A huge part of the Beast’s appeal is its back-of-a-napkin nature, how obviously and lovingly homemade it is. Changing its ramp drop to the same first drop every other wooden roller coaster has, like other changes that have been made over the years (switching to magnetic brakes, smoothing out the banking on the helices) reduces the ride’s character and unique charm.

One of my all time hometown favorites, but it hasn’t been the same lately with the trims and the rougher sections. Now it has new life.

If they do as good of a job on The Beast as they did with the retracked sections on the Racers a couple of years back, this will be a can’t miss.

Are they planning to speed up how long it takes to go up that first ramp? LOL. Seriously, I heard about this coaster for years being from CA and everybody I meet who was from Ohio or Kentucky said I have to fly there to check it out. So, I did in 2010 and....I thought it was ok. I'm sure this coaster was a huge deal when it opened up but I thought it was a little overhyped and expected more. I just remember how long it took getting up that ramp and how rough it was. I agree the last portion is the highlight but I expected more hills vs just one long straight portion of the ride after the first tunnel.

It also didn't help that I was in Holiday World the day before and just experience The Voyage which I thought was the best wooden coaster I rode at that time. Are they just re-tracking a certain portion? I do plan to go back one day with my son and definitely will try it at night.

Edit: I just watched some youtube videos and including the one on this page and it does seem to move up the first hill faster. However, go look at some of the early 2000's videos where it is clearly much slower.

The Beast, Presented by Motrin

Even though i've been on 500+ coasters the Beast is still one of my favorites (its actually my favorite coaster at KI even over Mystic Timbers) and am glad its getting major TLC. Like most all huge wooden coasters it can either be an amazing ride or not so much depending on maintenance, and last time I rode it was heavily trimmed and jackhammering. The only bad thing is it will be a long time before I am able to make it back there.

If the modifications make this ride any smoother I'm all for it. After sustaining rib fractures on Boulder Dash I've felt the need to ride wooden coasters defensively, and I love woodies. Went to Kings Island on my 70th birthday last August and rode The Beast twice but had to sit in a non wheel row and hold on in order to make it through this epic coaster.

Although the layout is different the construction reminds me of her long gone sisters The Bush Beast and Beastie. Gone, but never forgotten old friends.

Disney World to Offer Taste of the World at Connections Eatery