June 4, 2022, 5:01 PM · Cedar Point is venturing into the world of the up-charge special event with Wild Frontier Nights, an adults-only (ages 21 and over) evening that takes over Frontier Town for three hours from 9pm to midnight. This event runs June 3, 4, 10 and 11. Tickets are only available online, and come in three levels:

There are an extensive number and variety of activities to take part in during Wild Frontier Nights. (Go to Cedar Point's website to see a complete list.) Full disclosure - we were comped admission to the event by Cedar Point, and we greatly appreciate this. Cedar Point has always been very welcoming to Theme Park Insider to their media events and now their special events. I hope they understand that I want to give our Theme Park Insider readers an honest critique of the event.

We had a great time - mostly. There were no bad experiences, but some things were confusing and need to be rethought if this is to be an annual event. Personally, I hope it does become a yearly experience. It has great potential, but like all new experiments it needs some adjusting.

Entertainment - No complaints there at all! A live country rock band was playing all night on the main stage. The Fireside Foursome, a quartet of "cowboys" was roaming around the Festival all evening, and they were really talented! 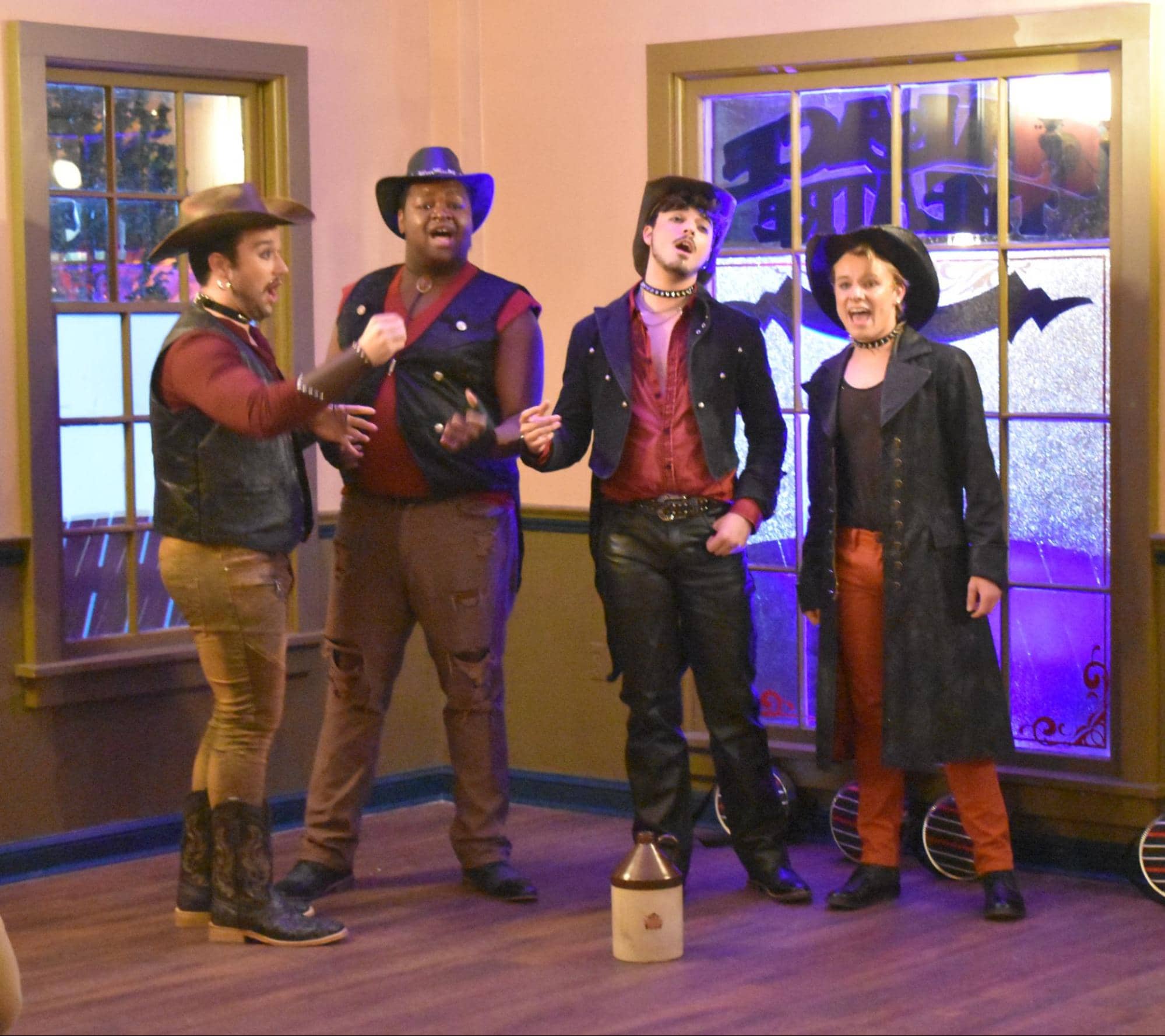 We watched "Lusty Lil's Rough & Rowdy Revue" in the Palace Theater, and it lived up to its name! The incredibly talented cast let their hair down and presented a show that was too risque for the family but just reserved enough to keep from getting shut down by the sheriff! Lots of fun. 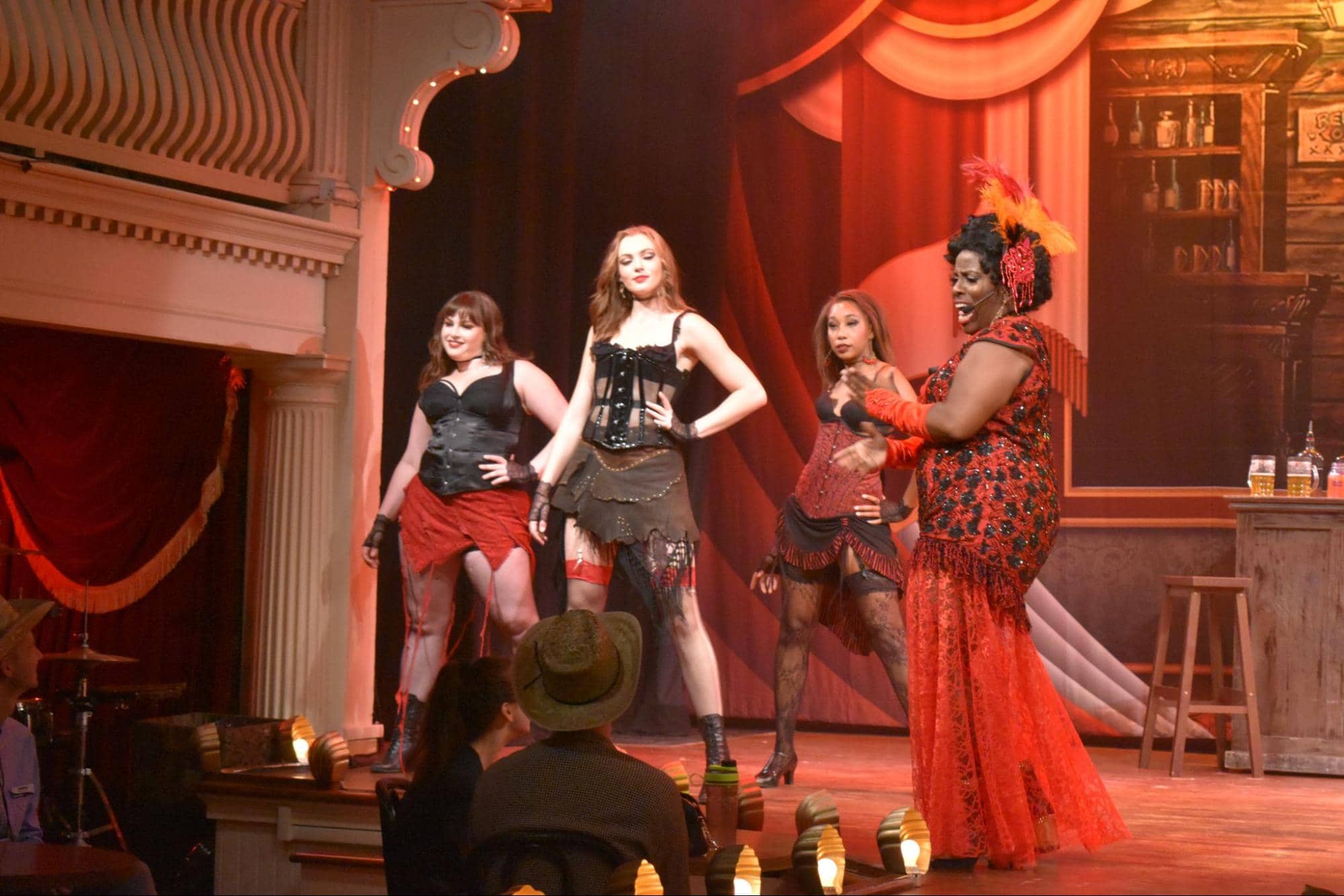 "Wild Experiences" - Mechanical bull riding, ax throwing, chainsaw carving, roping and bullwhip cracking were all available with admission. We didn't partake, but did watch some and everyone involved seemed to be enjoying it. 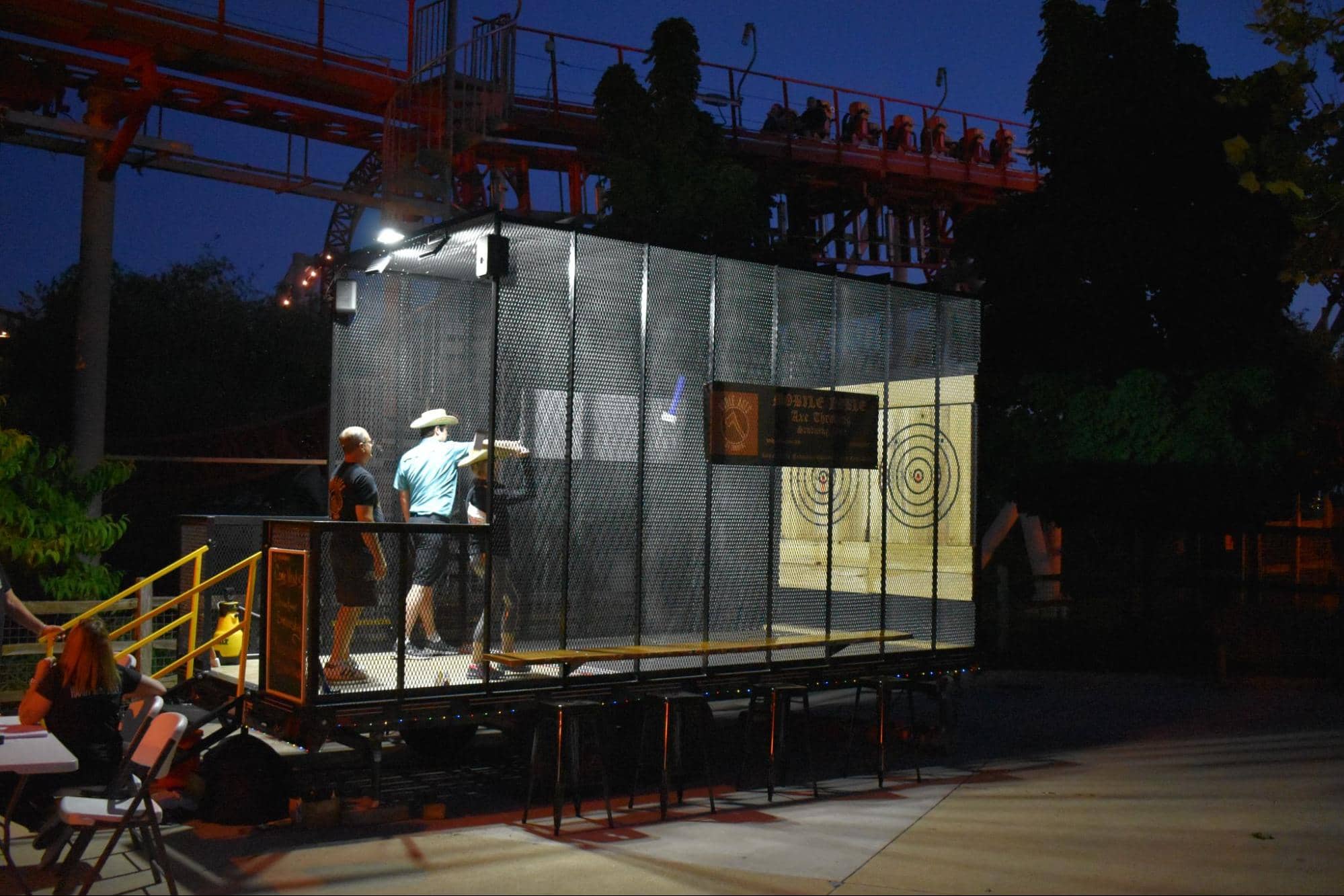 Ride Access - Five rides in Frontier Town were running with unlimited access (Cedar Creek Mine Ride, Maverick, Skyhawk, Steel Vengeance and Wave Swinger). There was almost zero wait time for anything! More about that later. But first, the food. 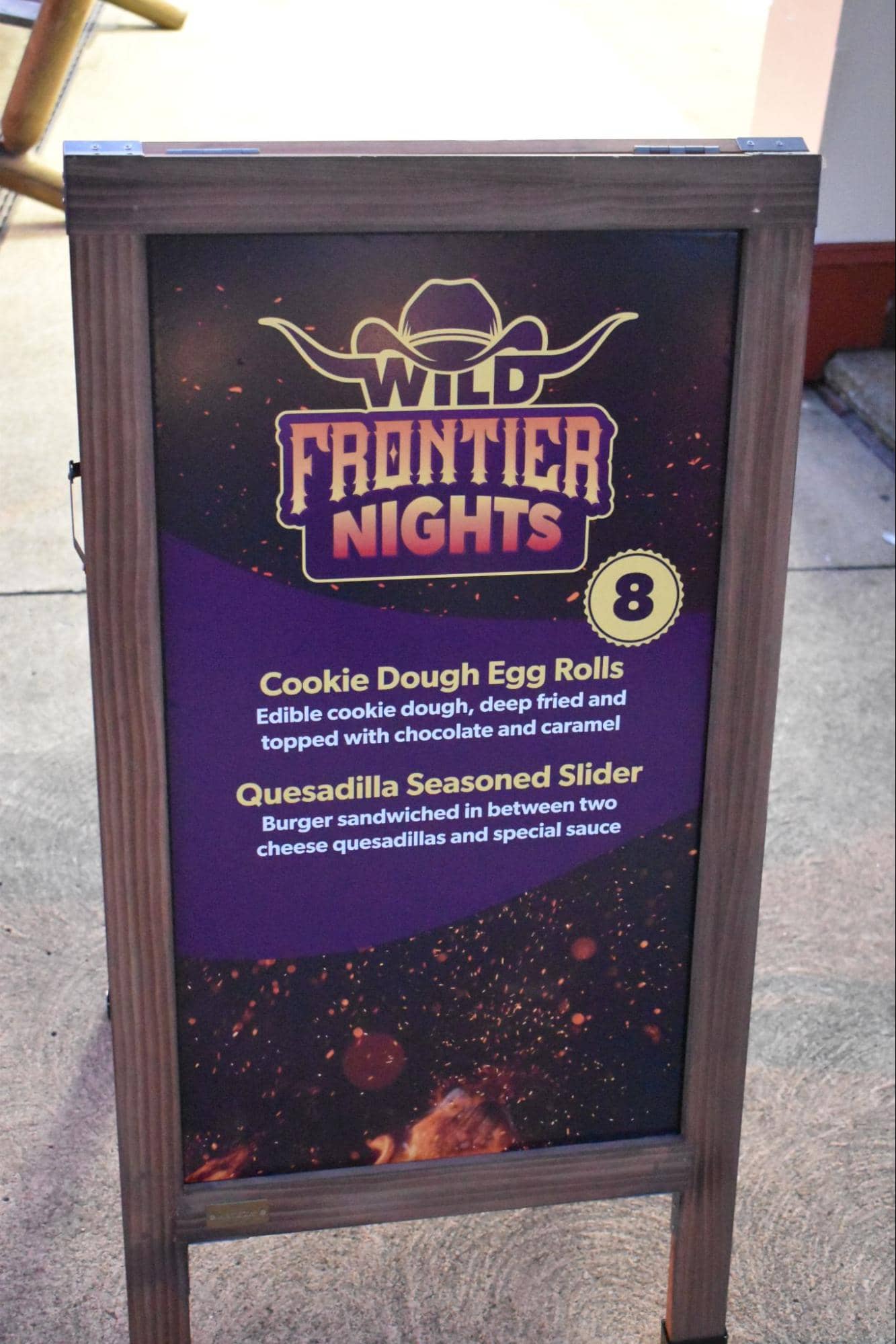 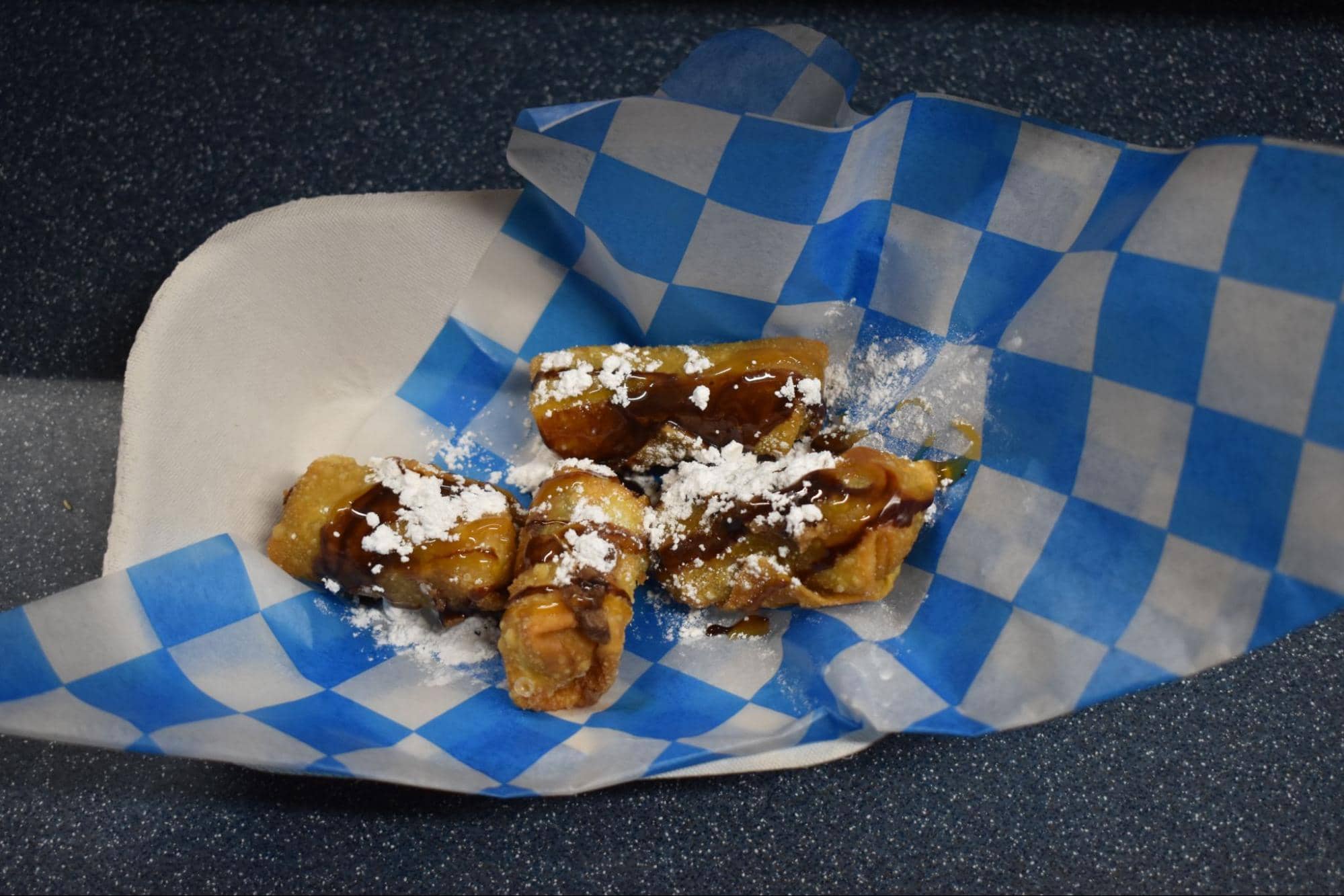 These were amazing! Warm, slightly gooey cookie dough inside, crispy outside. The only thing that would make them better was if the chocolate was available as a dip instead of drizzled on top. 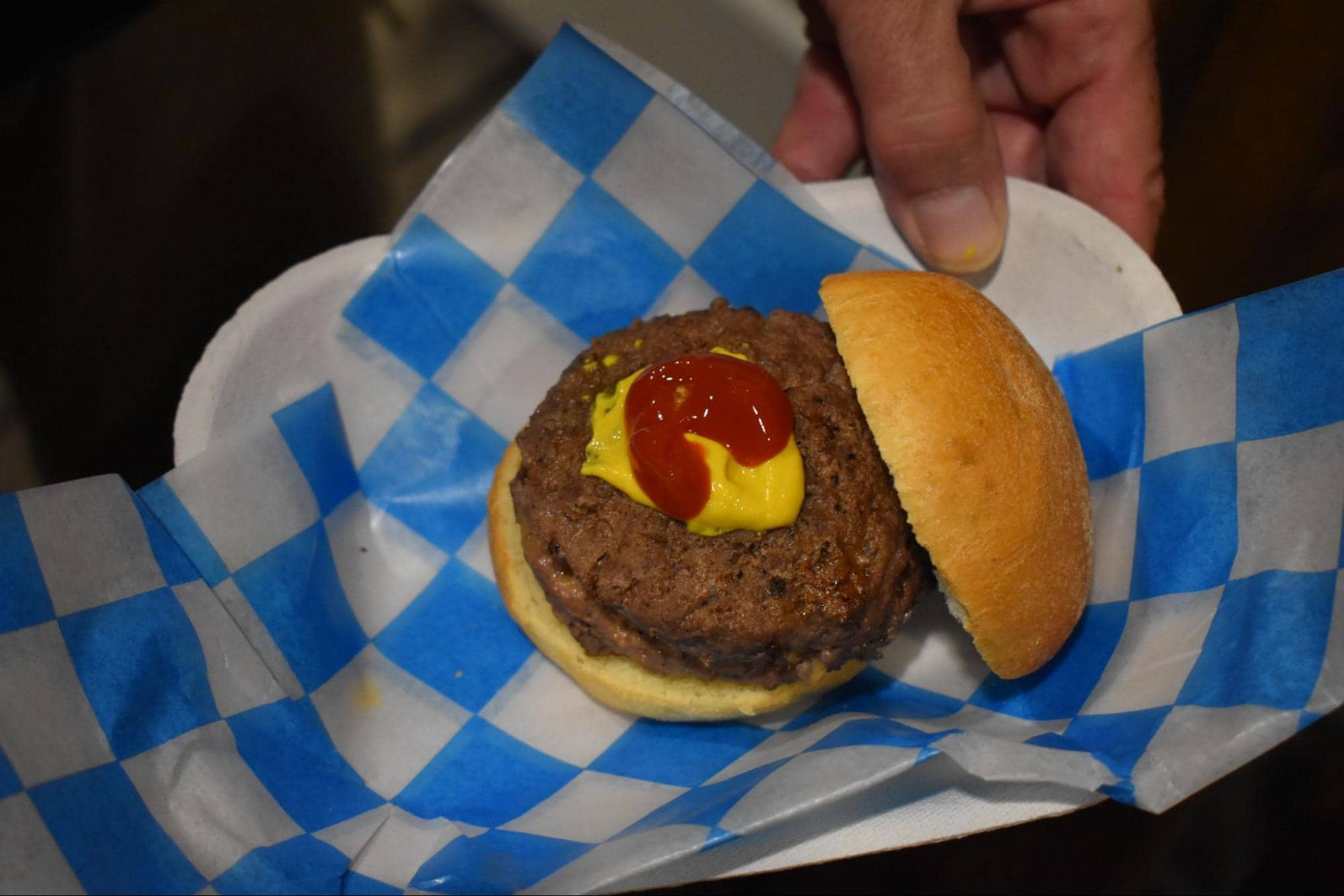 This was the Juicy Lucy Mac and Cheese Slider. You can't see the mac 'n cheese in between two hamburger patties. It was really good!

We didn't try everything, but made an attempt to get a good variety of what was offered. What we tried was good quality, and the serving sizes were mostly just right (satisfying without being too much or too little, with one exception). 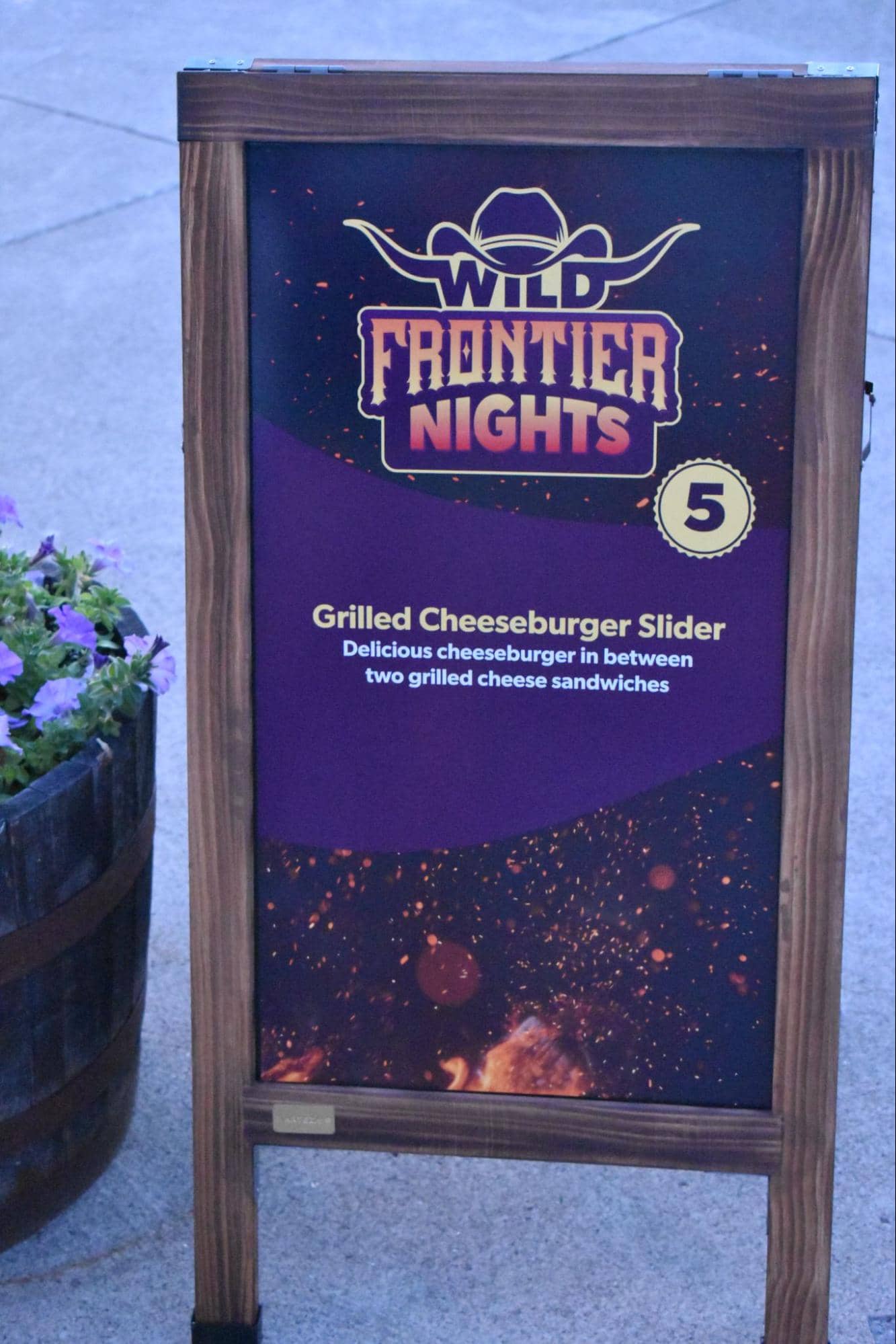 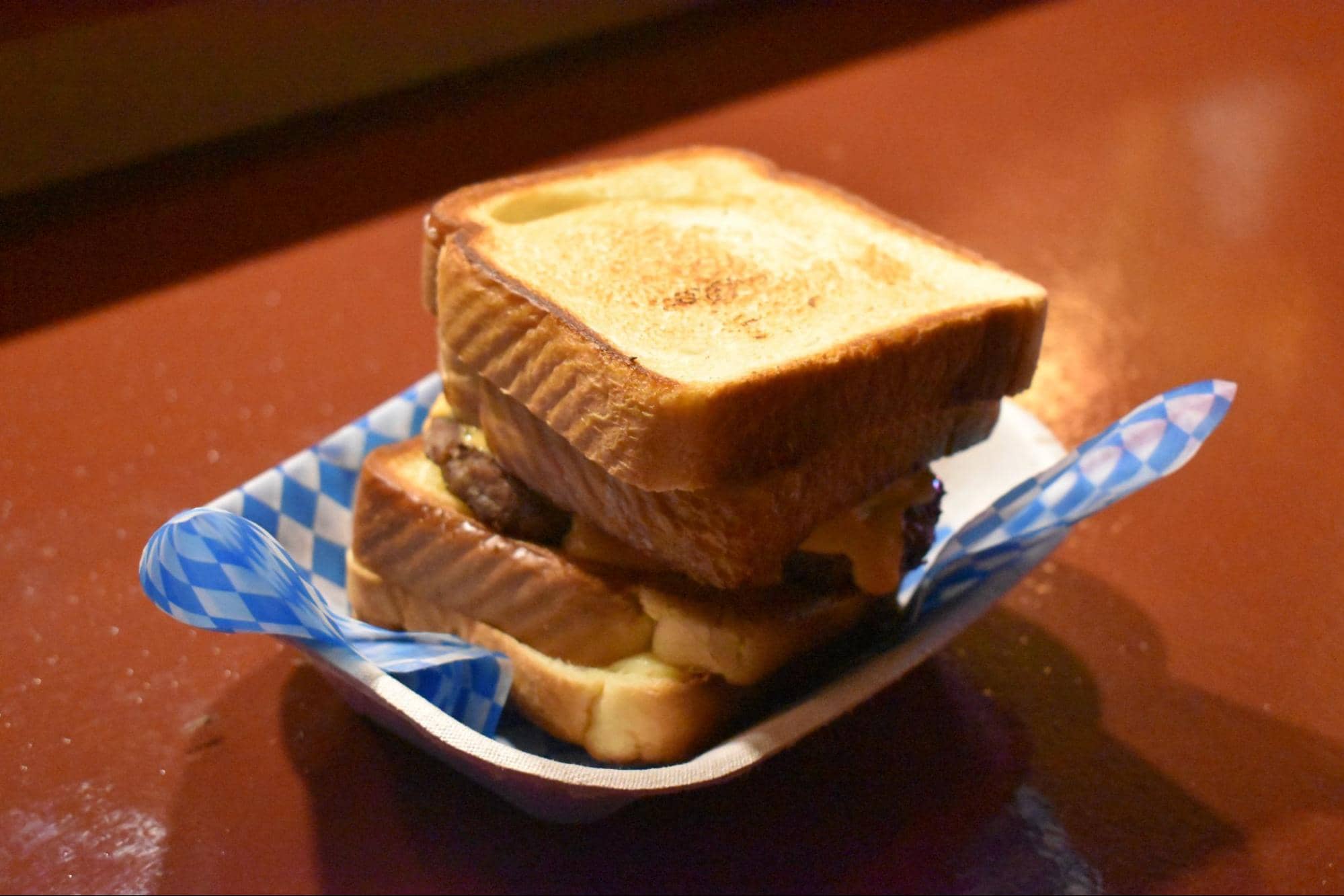 This was listed as a "Grilled Cheeseburger Slider, a delicious cheeseburger in between two grilled cheese sandwiches." It was two full-sized grilled cheese sandwiches (which tasted good by themselves) but between them they put two hamburgers (slider-sized) and poured over them a really spicy cheese sauce. It made it really difficult to eat, with the cheese sauce smothering one side of each sandwich... and then how do you eat the burgers in the middle? This was the only real failure we found in the menu... and the only reason I got it was because I went to the wrong food booth, since I looked at the wrong sign!

Food was where I would recommend that Cedar Point make its biggest adjustments for the future. Ordering food shouldn't be confusing, but to me it was. How can ordering food from a food stand be confusing? They used the same booths for the event that are used for the Frontier Festival that takes place during the day, and that offers completely different foods at the booths as are offered in the evening. In front of the booths are placed small A-frame signs listing what is offered during the Wild Frontier Nights, but the signs are small, dark and not well-lit, while the large sign above the serving counter is flood-lit and shows what is offered during the day. More than once I went to a booth to get one thing based on what was on the large, flood-lit sign only to be told that they didn't have that but had something else completely different. Ok, it was listed in the guide pamphlet what was offered and where, but I didn't usually bother to check. It was confusing, at least to me.

The Farmhouse Kitchen and Grill was grossly underutilized. That big, beautiful facility, brand-new and right in the middle of Frontier Town and the entire Wild Frontier Nights event, was only used for Build-Your-Own S'mores. So much more could have been offered in that facility, and that might have alleviated some of the confusion at the food stands.

Now about the rides. There was no wait on anything, because there were very few people at the event. I would guess that there were no more than three hundred people attending the event. I never saw Maverick or Steel Vengeance running a full train - several times I saw their trains running with only the front car with anyone in it. Every time I rode Maverick we had the option of staying in our seats and riding again because there was nobody waiting. It was a ride warrior's dream come true!

Why? The weather was perfect. Low 70s, clear skies, gentle breeze - and nobody there. For those of us who were there, it was perfect, but I have to wonder - if this is the size of the crowds for the rest of the event, is this going to be a sustainable event financially for Cedar Point? Is it going to go the way of 1994's "Christmas in the Park?" (Yes, that was an experiment that didn't go well.)

There was a lot to do, and we had a great time, but to be honest I'd have to think hard about spending that much for three hours. In my opinion, they should rethink the pricing. I'd add perhaps one food and drink ticket to the lowest-priced ticket (a la carte tickets can be purchased at the event). Reorganize how the food booths are signed, and make better use of the Farmhouse Grill. 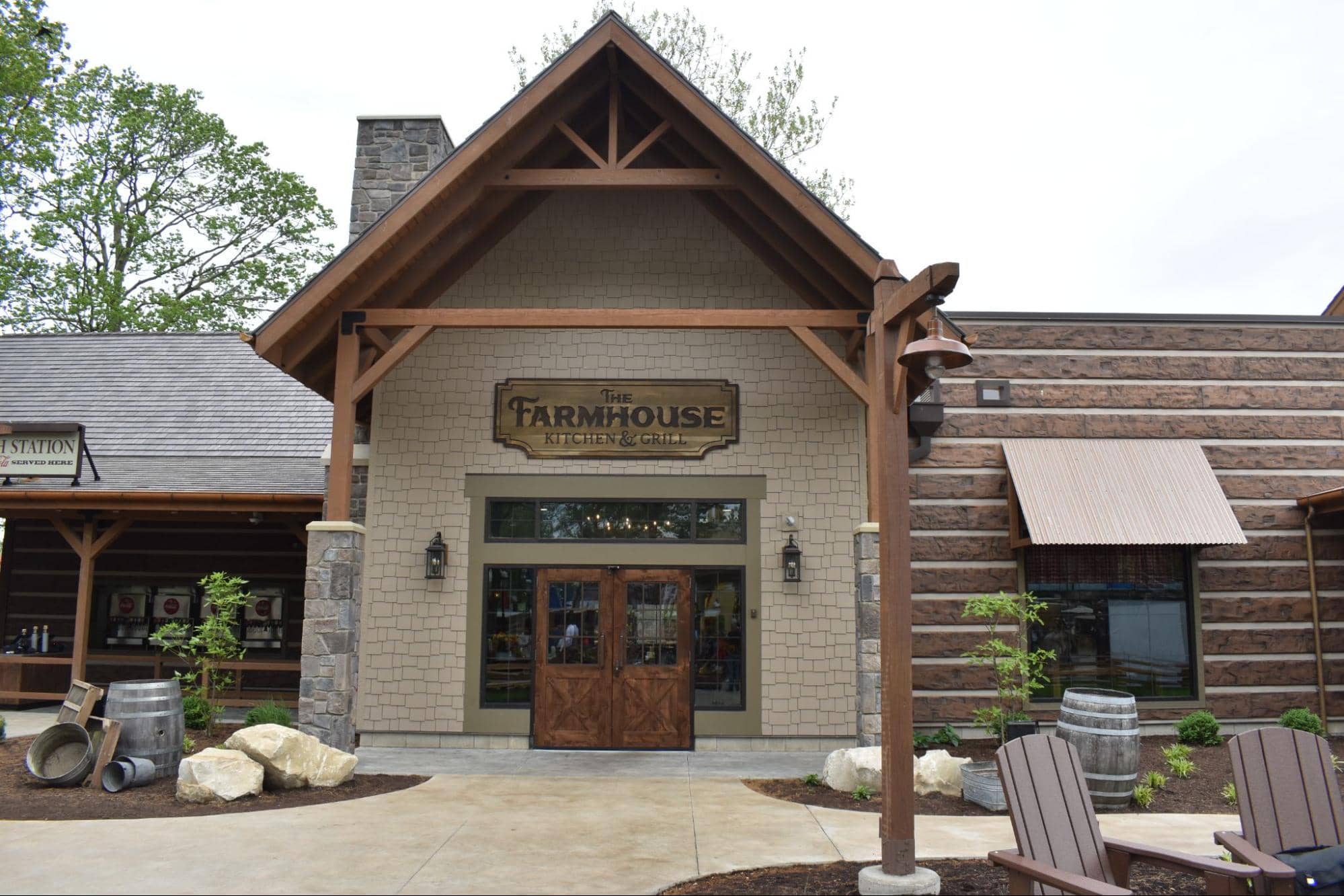 And turn down the volume of the music being played in the Gemini Midway as guests are leaving the event to go to their cars in the Cedar Point Shores parking lot! I like folk music, especially the hammered dulcimer music that was being played, but not at 120 decibels! We literally couldn't hear each other talk until we reached the gate!

Would I recommend trying out Wild Frontier Nights? Yes, I would, if you think you'd get enough out of the event based on your interests. Check out the website. It runs this coming weekend, June 10 and 11.

I could tell that Cedar Point did a lot of work to make this event something special. I found it entertaining and a really fun evening - I just hope they can make it more affordable for more of their guests.

The low attendance sounds like it really underscores how vital "kids" are to theme parks. Even Halloween events that are designed with an adult audience in mind know that they rely heavily on the teenage crowd.

If they're going to maintain the 21 and over requirement and very high price point, I don't see this event lasting very long. The concept is highly appealing to me, but it's pretty much a no-go for us if we couldn't take our son (12 years old). We've done a few adults-only events at WDW (mostly when our son was much younger), but when we're on a theme park vacation, we do so as a family, and plan activities and events that can accommodate kids, even if they're geared towards adults like breweries, wineries, high end restaurants, clubs, etc... Perhaps this hard ticket event will connect with some locals, but I just don't see it drawing enough interest to be profitable.

I do applaud Cedar Point for trying something new and different to try to find other sources of revenue, but I think this might be one and done for the park. Maybe this could work at Knotts where there's a larger pool of locals and passholders close to the park, but in Sandusky, I just don't think there are enough true locals that would spend that kind of money to make this event work.

Nice review, Jim. Interesting concept but too pricey, even if all you want to do is ride coasters and see live entertainment. If you want to drink the price is beyond exorbitant. Personally I don't mix alcohol with roller coasters.

I’ve been waiting for one of the theme park operators to do something like this for a while. Back in the olden times, when Disney’s one-day ticket prices got close to but didn’t cross the $100 mark, my then-girlfriend wondered if the parks could offer an adults-only event costing at least double the price. I saw Mickey’s Not-So-Scary Halloween Party and the other parks’ more spooky offerings, and wondered why someone didn’t offer an adults-only event that emphasized more “party” and less “scary”. Kudos for Cedar Point for finally tying it.

Really do wonder if this would work better at Knott's here in Southern California, but that park has worked so hard to position itself as a affordable, and thus more family-friendly, alternative to Disneyland that I suspect that it would not risk compromising that message with an upcharge event like this.