Cedar Fair's flagship park is introducing The Boardwalk for 2023. The Boardwalk will include the new Grand Pavilion, a recreation of the 1888 original that will feature a new restaurant and a waterfront bar with viewing decks of Lake Erie and the park. The big new ride will be Wild Mouse, which will be a spinning family coaster with a height of 52 feet and top speed of 35 miles per hour.

In addition to the addition of Wild Mouse, the park's Tiki Twirl will be refreshed and renamed as former park classic Calypso, and the Matterhorn and Scrambler will be relocated to The Boardwalk, with the latter being renamed Atomic Scrambler.

Canada's Wonderland also is getting a new family coaster for 2023. Snoopy's Racing Railway is coming to Planet Snoopy as the park's 18th roller coaster - with no controversy over that number. The park described the ride: "This family launch coaster accelerates from zero to 50 km/h in a matter of seconds before zipping through dips and turns as your train narrowly avoids the traps set by Woodstock and his Bad Seed Gang!"

Wait a minute - Woodstock did a heel turn? Now you have my attention. 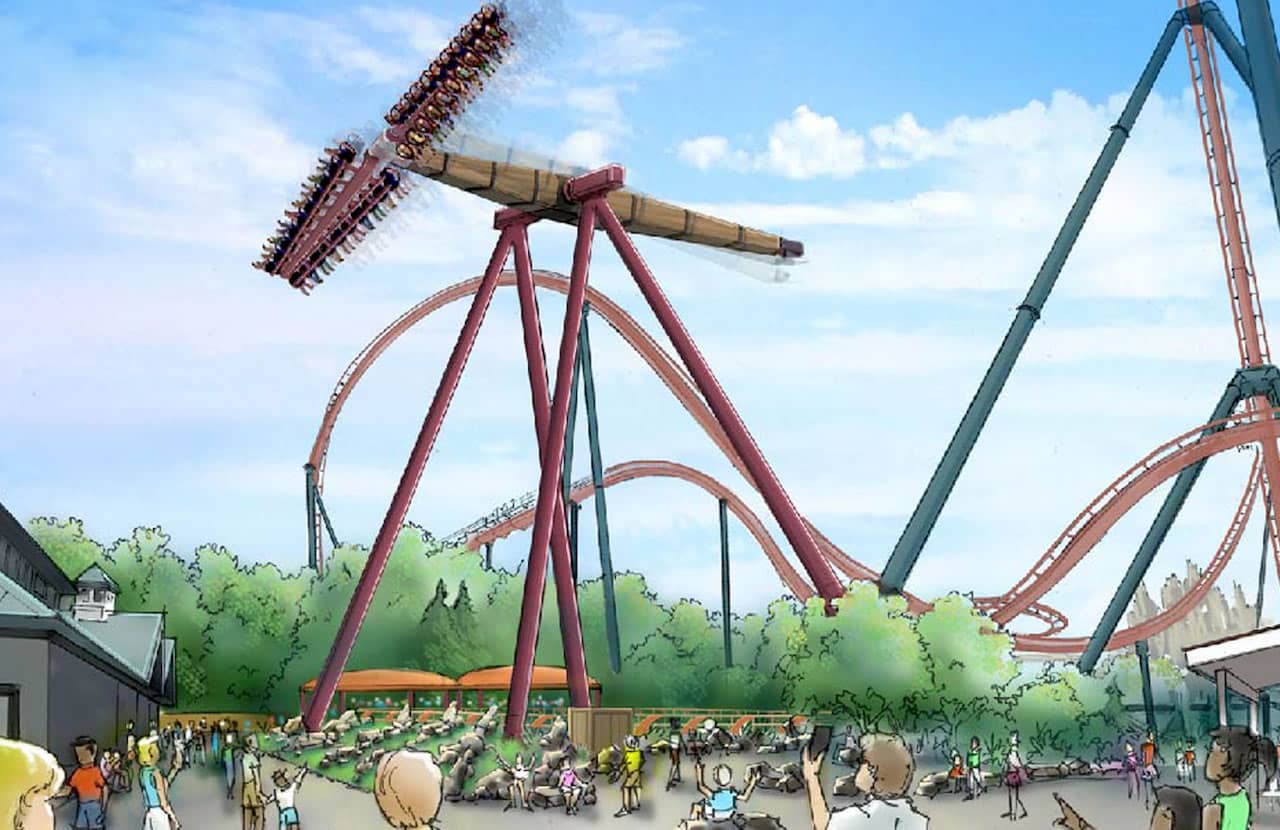 The bigger addition to Canada's Wonderland next year will be Tundra Twister, which the park describes as "the only attraction of its kind in the world." This giant looping ride with rotating gondola arms looks to me like a plus-sized Mondial Diablo, and Canada's Wonderland offers specs of 154 feet tall and a top speed of 46 mph.

We knew that Knott's was rebuilding its Montezooma's Revenge coaster for 2023, but now we know that ride's new name will be MonteZOOMa: The Forbidden Fortress. The rebuilt Schwarzkopf shuttle loop coaster now will include a randomized launch sequence and its queue will get story upgrades about doomed treasure hunters searching for Montezuma's gold, as the attraction anchors a refurbished Fiesta Village inside the Southern California theme park.

The Kansas City park is celebrating its 50th by calling back to its long-defunct 1973 Schwarzkopf coaster, Zambezi Zinger, by reviving that name for its new GCI hybrid coaster. The new Zambezi Zinger will feature 2,482 feet of Hybrid Titan Track on a steel and wood frame, with a top speed of 45 mph. The ride will run two Infinity Flyer Trains with 16 passengers each.

I like the direction CF has gone in with their new additions post Kinzel. My number one gripe with their parks were always that other than CP they were boring, especially Knotts where they just kept taking out theming. Though the pace has been slower than I would've liked, the major CF parks have been much improved.

Unfortunately the smaller parks have been totally neglected. In regard to WOF I think this will be a good addition but within the next few years they still need a big new coaster, as they haven't gotten a big attraction in over 16 years.

I'm really hopeful that the carousel in Fiesta Village is getting some much-needed TLC during this extended renovation. It's a terrific, old-school carousel that is in bad need of maintenance and this seems like a great time to both address that and to bring it fully into the Fiesta Village fold. The same can be said about ... every other attraction in the themed area, but ... I confess I care less about them.

I need CP to refresh those horrid bathrooms. They literally have a few unadvertised haunted attractions all year round. That being said, CW wins by a smudge over Canada's Wonderland.

The revived Zambezi Zinger may be tame by current coaster standards, but this is huge news for long time Worlds of Fun guests. Making the ride a tribute to WoF’s original coaster is near perfect.

It would be perfect if the seating and restraint system was the same: straddle a bench with no lap bars, no seatbelts, and NOTHING keeping you in your seat! I know that will never happen, but it is amazing that it was once the norm for the KC park.

I know the original ZZ is still in operation in South America. Does t anyone know if a proper restraint system was added?

That spiral lift is pretty cool for a woodie, and it will be interesting to see what the famed Titan track can deliver.

While none of these new additions are standout attractions (except for Zambezi, but it still seems pretty tame), I really love what Cedar Fair has been doing with revitalizing old areas of their parks, making them much better-themed lands. This year we got Jungle Expedition, and now next year we're getting Aeronautica Landing, the Boardwalk, and the new Fiesta Village. I think most regional parks need to up their theming in general because creating an environment that people enjoy being in is much more important for season pass sales, merchandise sales, and repeat visits than intense new coasters. I've also gotta commend them for their new dining options. Kings Dominion has gotten some of the best theme park dining in the past few years, and now Cedar Point looks to be getting a great new restaurant.

To announce these on the same day Six Flags posts disappointing financial results feels like a troll move and I'm here for it.

"What, nothing for Great America?" Tom Swift said facetiously.

Actually, to my great surprise, my home park is increasing operations in 2023, and will be open every weekend.