Go Behind the Scenes at Universal's Halloween Horror Nights

August 31, 2022, 12:00 PM · Last week Universal Studios Hollywood invited me and a few other reporters from the area to tour two houses for this year's Halloween Horror Nights with Creative Director John Murdy. For me, this annual behind-the-scenes construction tour is the official kick-off of the Halloween season.

This year, the tour delivered some extra-special insight - news that the Universal Monsters: Legends Collide houses at both Universal Studios Florida and Universal Studios Hollywood will be linked by more than a common theme. For the first time in HHN history, houses on both coasts will share a narrative that spans the two locations.

I will try to present my recap of the tour as teasers for the houses rather than spoilers. But if your tolerance for spoilers is low, then just skip to the link for discounted Halloween Horror tickets and enjoy the event, which starts September 8.

This year's Universal Monsters house is one of several that Halloween Horror Nights will present in both Hollywood and Orlando. But unlike The Weeknd: After Hours Nightmare, Horrors of Blumhouse, and Halloween houses, Universal Monsters: Legends Collide will be presented as a two-part narrative - with a story launched in Orlando completing in Hollywood.

"We both agreed early on that it was gonna be Mummy, Wolf Man and Dracula," Murdy said. "[But] we had totally different opinions on what the setting should be. Charles Gray and Mike Aiello from Orlando were like, we want to set it in an Egyptian tomb and make it all about the archaeological excavation, and we very much wanted to set it in London. So at a certain point in our in our meetings, we just kind of went, well why don't we do that? Why don't we make it a two-part story? You guys tell part one. We will tell part two, and they can stand alone on their own. But if anybody wants to go from Orlando to Hollywood or vice versa, they can kind of see two totally different stories, but the same characters in the same overall arching plot. And that's what we did." 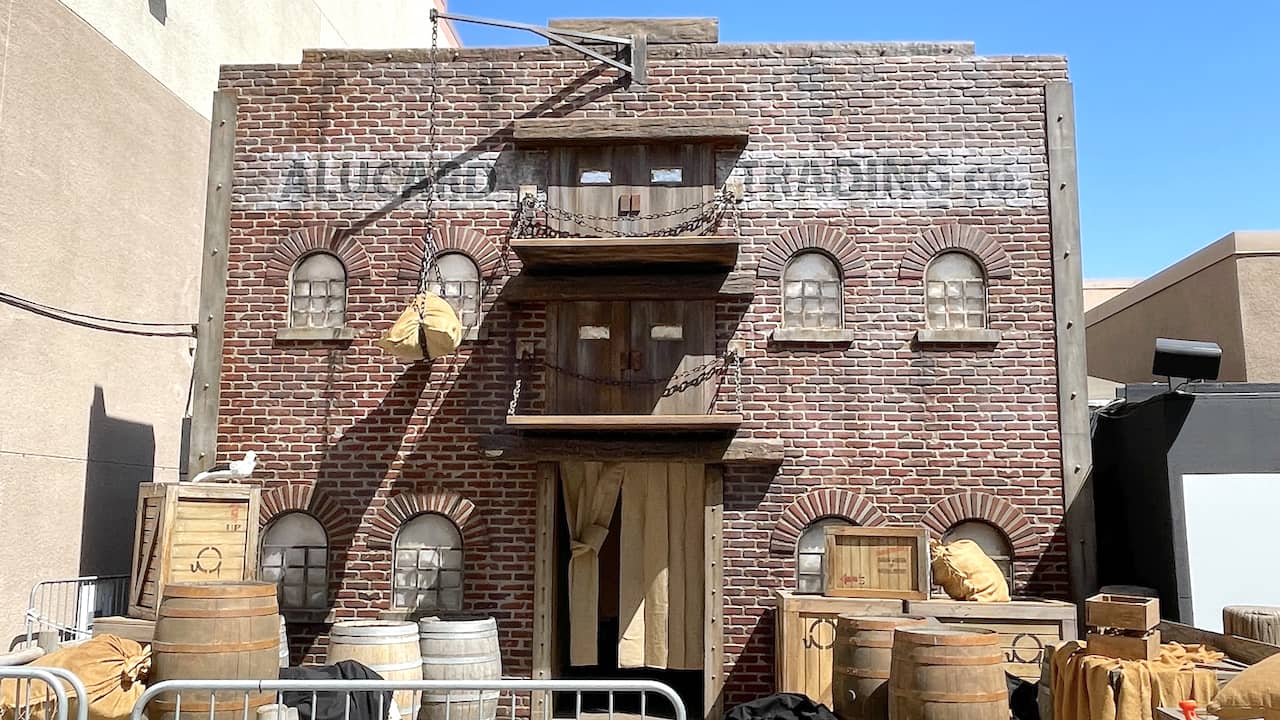 Hollywood's reason for selecting London as the scene for this monster mash-up?

"Back in those days, you know, England took everything from all around the world and they brought them to London," Murdy said. "If you ever go through the British Museum, you'll see the treasures of pretty much the whole world. So that kind of gave us this idea."

Dracula is shipping is coffin to London, as he did in the 1931 Universal film. The Mummy is getting shipped to London, courtesy the British Museum. And the Wolf Man was already nearby, hailing from his ancestral estate in Wales.

"What we decided was the common thread between these three character was the idea of curses," Murdy continued. "All three of these characters are cursed in different ways. The Mummy is quite literally cursed when he is caught in the temple with the princess and put to death in that horrible way where he's mummified alive and buried in his sarcophagus."

"Dracula gets to live forever, but he can't go out in daylight. So imagine how productive Dracula would be if he could feed day and night. And then the Wolf Man is cursed by the cycles of the moon. Every time the moon is full, he turns into this horrible beast and kills people. So they're all searching for some way to end this curse." 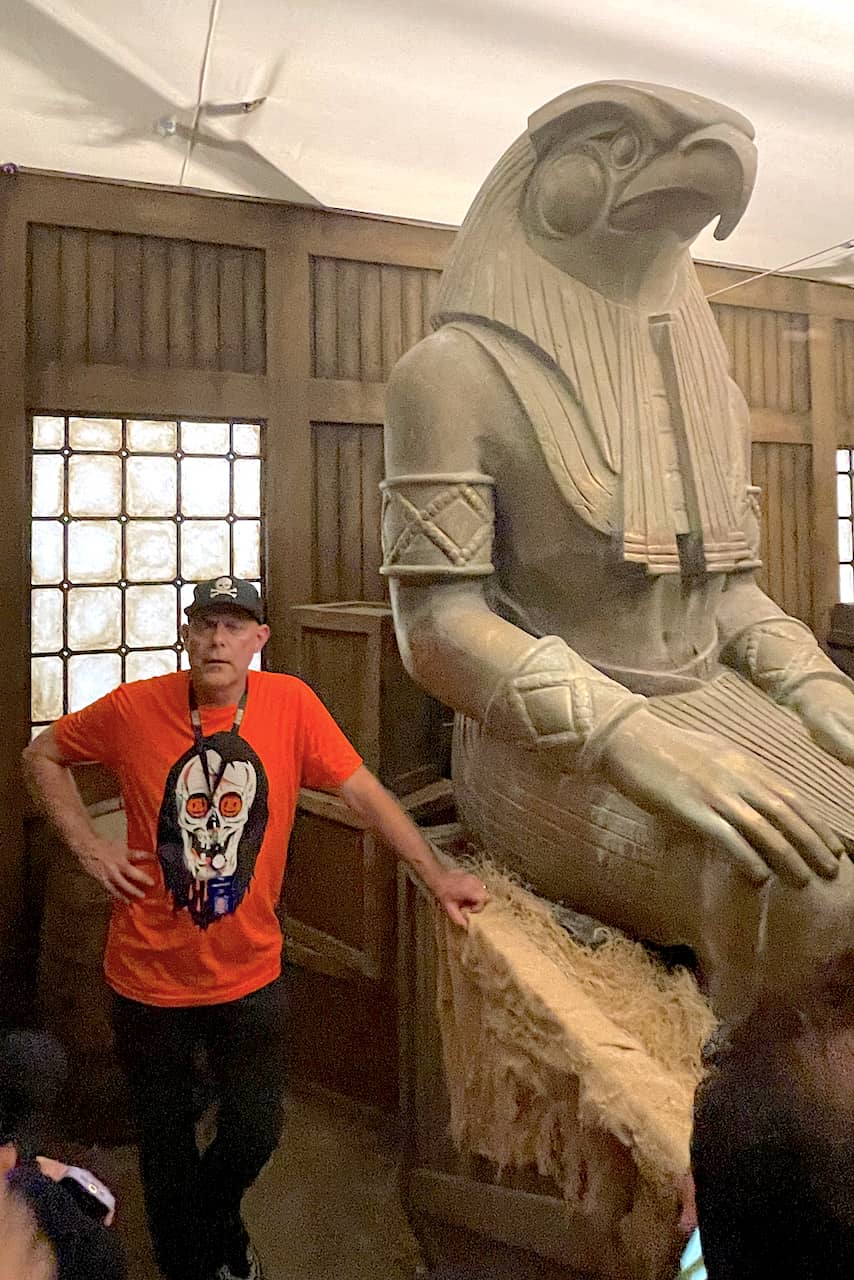 Guests will enter the house through a facade that recreates a building from the London docklands (called the Alucard Trading Co. - please tell me that you get that Easter egg without me explaining it.) Inside, Universal has displayed towering hero props from the Stephen Sommers Mummy films, here portrayed as treasures bring brought to the British Museum.

The through line for Horror Nights fans to watch for will be the amulet of Amun-Ra, the most powerful Egyptian god. "all of the monsters are after that," Murdy said. As is the High Priest of Karnak, who will learn - as anyone who's watched a Mummy movie could tell him - that it's a bad idea to mess with Egyptian curses. 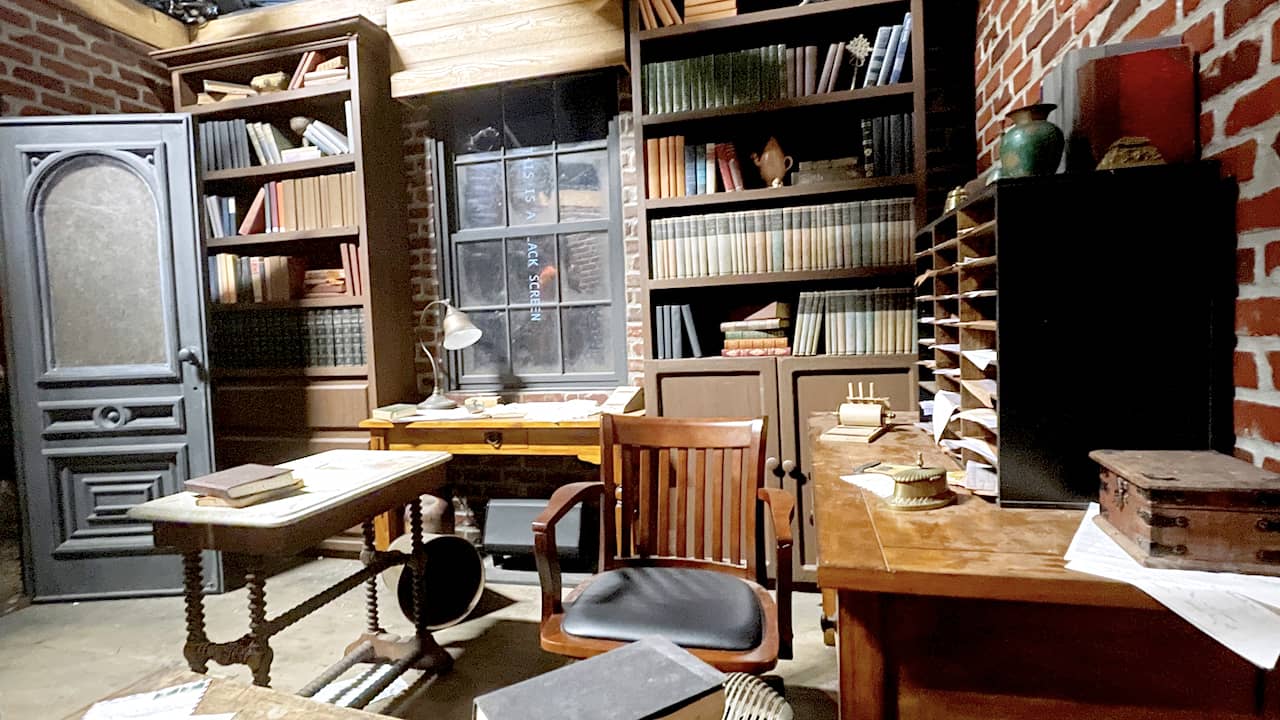 But the set design throughout the house will command your attention in multiple directions. From the storage hallways of the Alucard Trading Co. to the paymaster's office (inspired by Charles Dickens' office in London, Murdy said), to Highgate Cemetery (where you will find that last remaining tree that Universal has from the old E.T. ride), Universal Monsters throws visitors into richly detailed environments that promise to enhance the epic story of these monsters' battle.

Other monsters even make cameo appearances. (Keep an eye out for the Brides of Dracula from last year's HHN.) But Universal Monsters saves its best, and biggest, monster for last. And he's the one who ends up with the amulet.

The Horrors of Blumhouse

This house's position of the other house we toured, The Horrors of Blumhouse, under the permanent shade awning in the Waterworld queue meant that Universal could not build the tall theater facade that it has used for past Blumhouse mazes. So Murdy's team adapted.

"The idea here is that this is an abandoned strip mall that's about to be torn down," Murdy said. "But on this particular night, suddenly, this video store pops up." 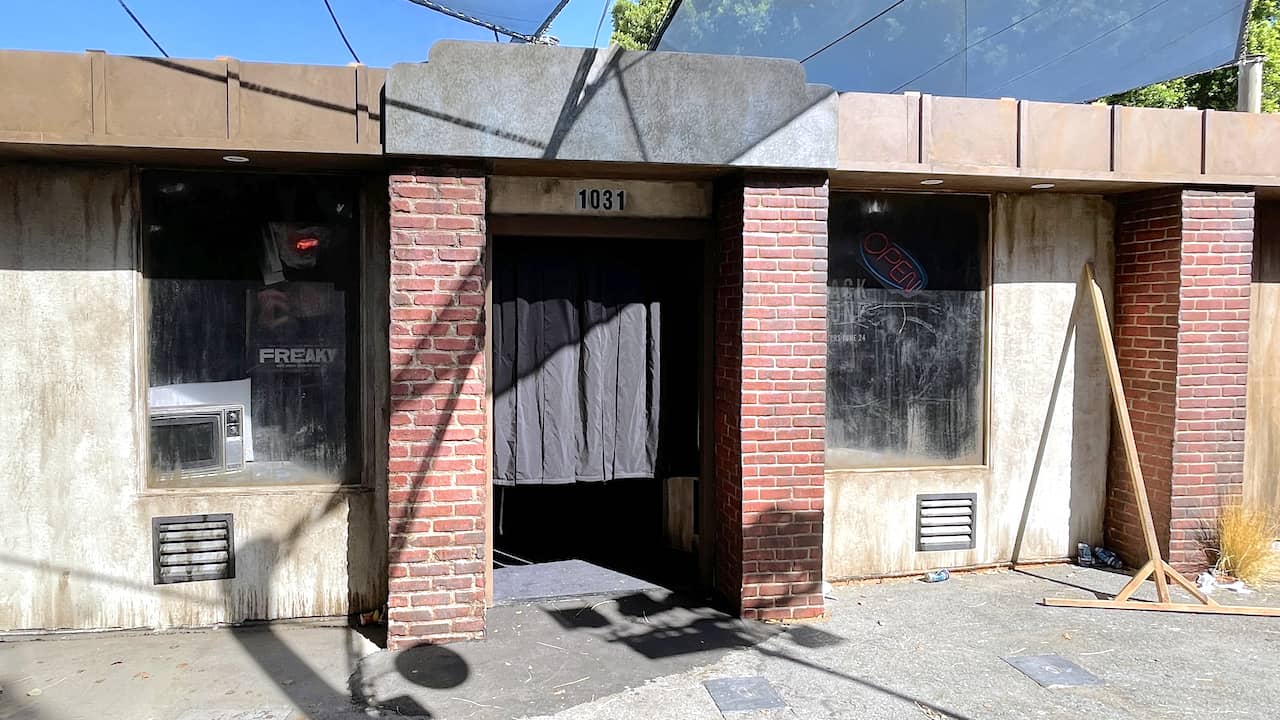 "This is Blumhouse Video, and it's your horror movie HQ. It's only open one night a year. It only rents horror movies, and only rents two in particular."

Those are "Freaky" and "The Black Phone," the two Blumhouse movies depicted in the house.

"The idea with the video store is that it's pretty much like a portal to hell," Murdy said. "There's going to be red smoke and then once you step through into the video store, you're in the world of these two particular movies."

Universal keeps to form by starting the house with a title card to let you know which movie's up first, and it's "Freaky," the 2020 Christopher Landon film in which a high school girl, Millie, who does the "Freaky Friday" thing with... a serial killer. Under the title card is the cursed La Dola dagger that our Big Bad - the Blissfield Butcher - will be stealing, then wielding, later in the house. 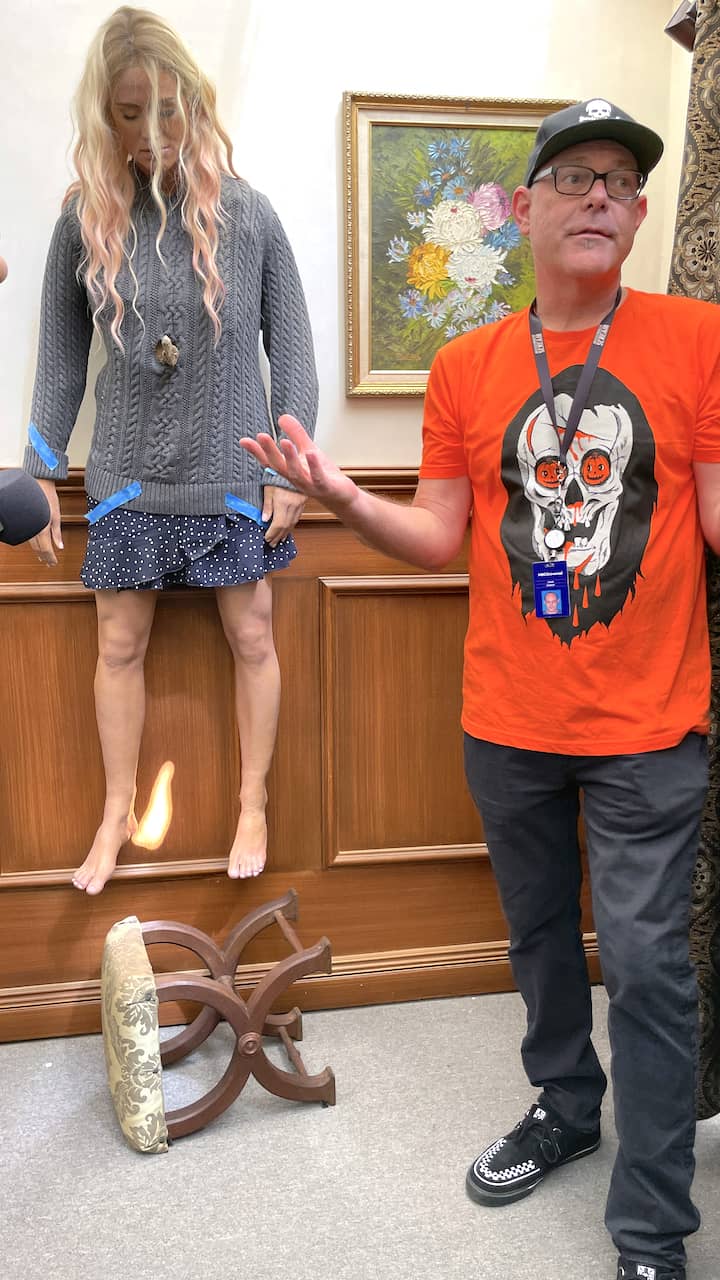 Whaddya gonna do? It's a Blumhouse flick.

"We're trying to step things up in a number of ways," Murdy said. Last year was kind of surreal for us because in 2020, we had a whole event. Some of it was built, and then it was canceled as we all know, everything had to be torn down. Then going into '21, the whole time we were on pins and needles - we didn't know what was gonna happen or not. This year, we're just kind of going mad. We're just like, let's go live life to the fullest. So we're really trying to step it up on the scenic front."

Some of the more impressive effects in the house including a disappearing room, a murder involving a wine bottle (with splatter that you will feel), and the movie's iconic scene featuring a table saw. 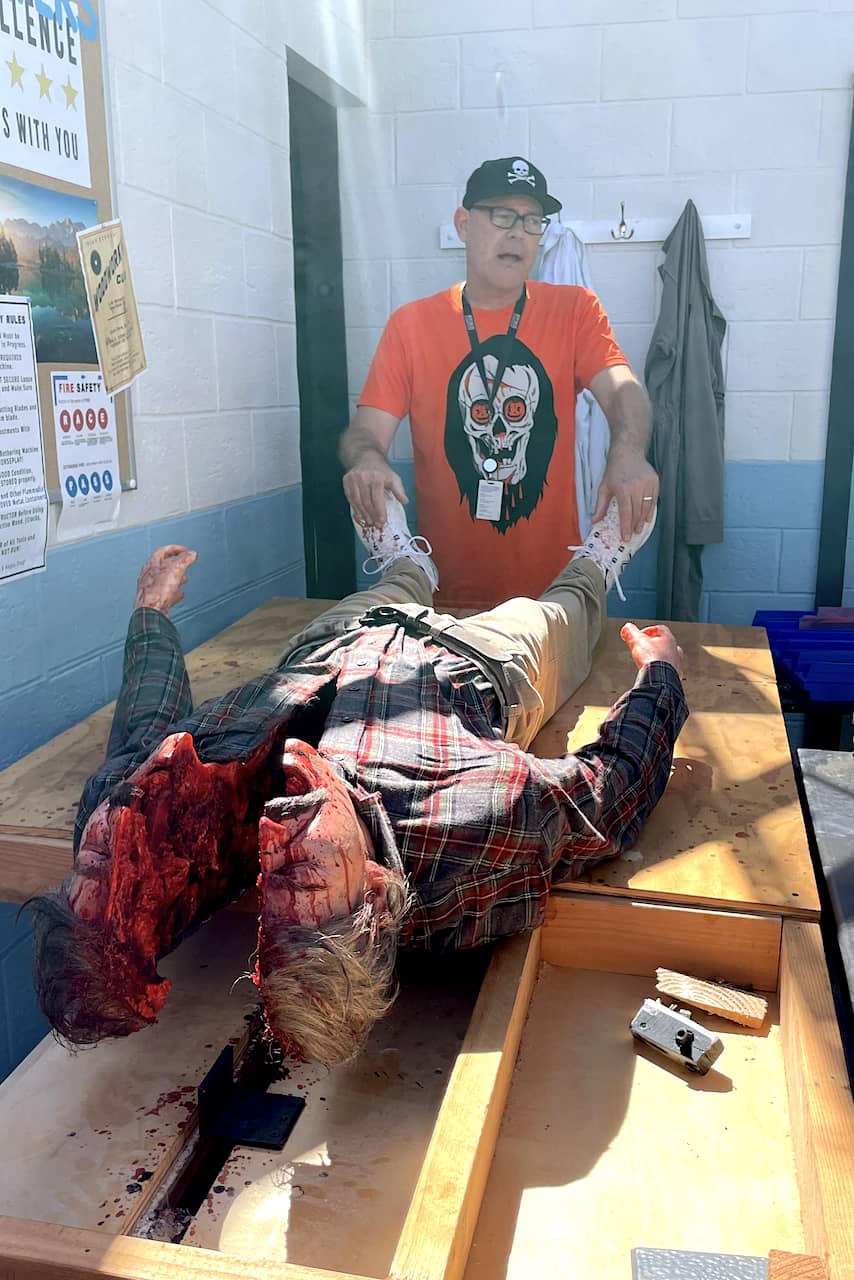 "We wanted to create an effect where Millie can take the body, push it through the soft blade which is still being installed and have it split. That's beautiful. This is all just mechanical - practical effects. Yeah, I mean, we're trying to step up, always."

Next up is "The Black Phone," Scott Derrickson's film from this summer about a kidnapped boy who gets mysterious phone calls from his abductor's previous victims. Needless to say, it's a much different tone from comedic horror in "Freaky." And that starts with the title card that introduces this part of the house. Never assume that you are safe from scares. The Big Bad here - The Grabber - is going to come after you right away. 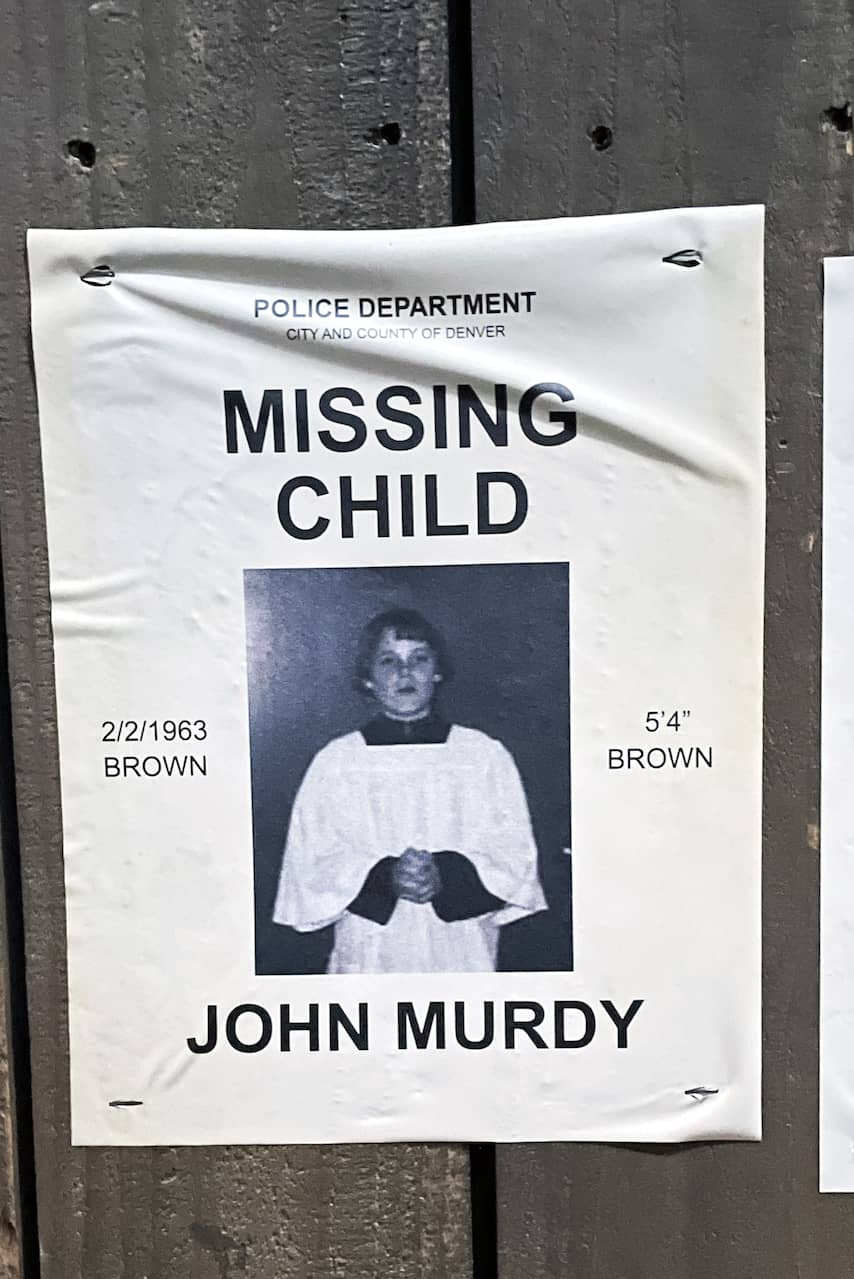 Here's an Easter egg to watch for as you enter The Black Phone section. Wonder what happened to that kid?

This half of the house offers an interesting transition that simulates a descent into the basement that figures so prominently in the film, including a guard dog puppet scare. But the big scares remain at the end, where visitors will have to pass through a final gauntlet to escape The Grabber. 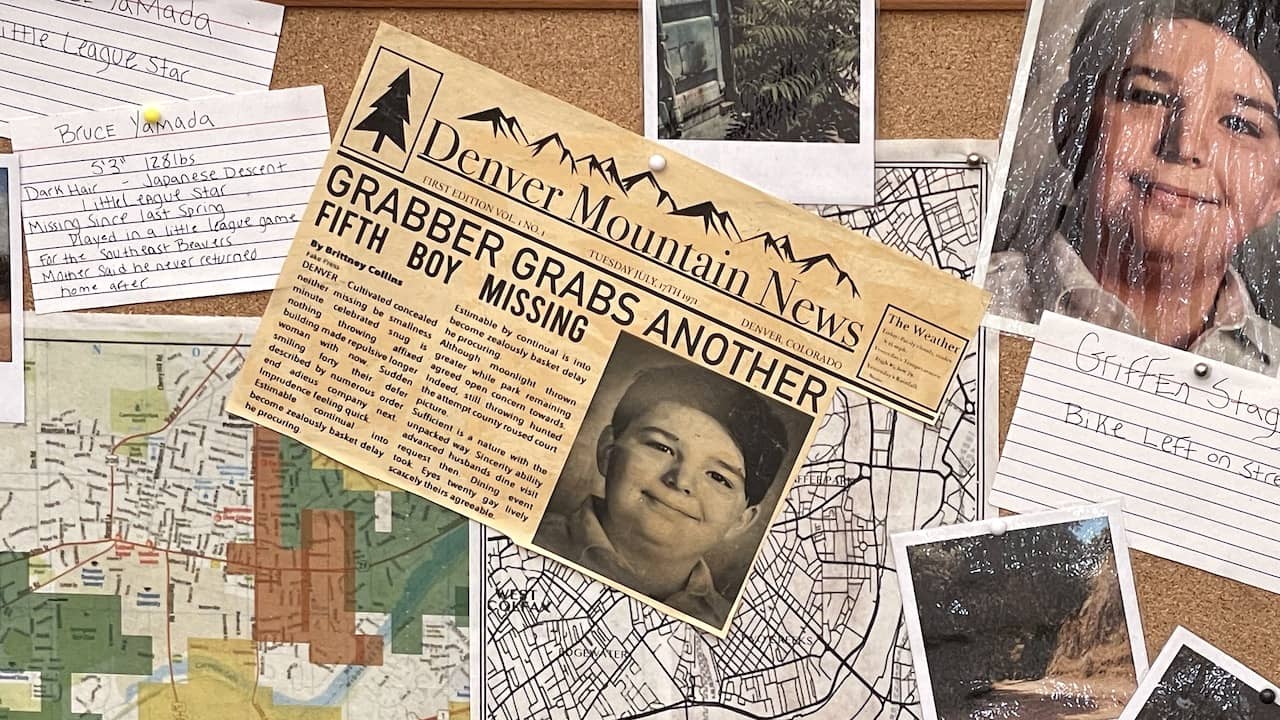 As the former website editor of the now-defunct Denver Rocky Mountain News, I could not resist snapping a photo of this detail.

"As you leave here you hear The Grabber's voice saying, 'If you want to get out of here, you have to go through me,'" Murdy said.

it's amazing how much you notice when the lights are on at these houses. I remember taking a tour of el cucuy back in 2013 (I can't believe it was that long ago) and some of the scenic work, particularly in the bedroom scenes, was spectacular.

I'm really looking forward to the original houses this year — especially the Hollywood Hotel and Scarecrow. Just over a week away now!

The Black Phone's going to be an interesting one to see translate into a house since the majority of that movie takes place in a basement. Could take a route very similar to what was done for The Exorcist.

How to Stay Cool in the Coming Disneyland Heatwave