September 27, 2022, 4:57 PM · SeaWorld San Antonio next year will open what it is calling the world's first launched flume coaster.

Catapult Falls will launch eight-person boats at 30 feet per second (doing the math, that's about 20 mph) up a crossover and into a splashdown before turning toward a 55-foot vertical elevator lift that will dump riders down a record-setting 53-degree drop, after which they will hit the ride's second splashdown at about 37 mph. 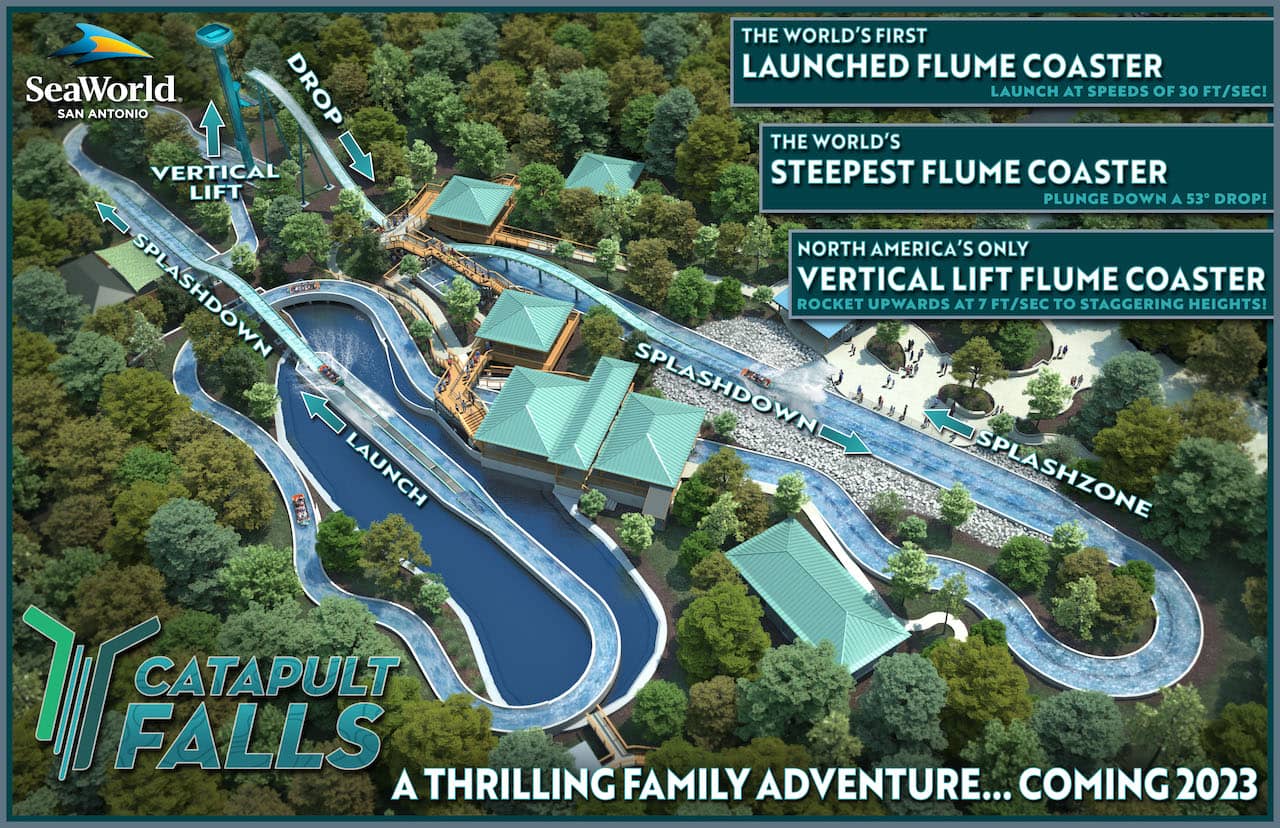 "Catapult Falls will be the perfect addition to our already fantastic line up of family rides," SeaWorld San Antonio President Byron Surrett said. "Not only will it provide thrills for those wanting the exhilaration of a coaster-type ride, but being a water ride, it will give guests one more way to cool down in the hot Texas temperatures. It will be the perfect family adventure ride."

SeaWorld also is calling Catapult Falls "North America's first vertical lift flume coaster," which splits more hairs than a Marine Corps barber on the first day of basic training. Sister park SeaWorld San Diego's 2004 Journey to Atlantis features an elevator lift, yet SeaWorld hasn't used the specific term "flume coaster" for it, so there's that hair split. Now if we are talking about water attractions that use only a flume rather than a track to guide their ride vehicles, Holiday World's old Pilgrims Plunge flume ride, later Giraffica, featured an elevator lift for its 10-person boats. But those boats never went up again after going down on the ride, so perhaps that's enough to DQ it as a "flume coaster" and split our next hair.

Regardless, an elevator lift on a water ride is hardly a novel experience at this point (see also SeaWorld Orlando's Infinity Falls and Silver Dollar City's Mystic River Falls). Nor is a launch. (That's pretty the defining element of a water coaster at this point, isn't it?) But the combination of a water launch and a vertical lift on one ride? Okay, let's give SeaWorld San Antonio that as a unique combination among major American theme parks.

And to help support Theme Park Insider while saving money on discounted theme park and attraction tickets, including to the SeaWorld parks,. please visit our nationwide Attractions Discounts list.

Perhaps a stupid question, but: Is a launch, even a timid one, fun on a water ride like this? Maybe that element of the track is much more "coaster" than "flume" but if you're being thrust through a bit of water resistance, I can imagine that feeling a little unpleasant. Regardless, the drop looks excellent and as Robert pointed out, the vertical lift as featured on Infinity Falls (among others) is neat in addition to a great space saver.

Finally getting the Journey to Atlantis they deserve! Although, I finally rode theirs in April for the first time and it wasn't a terrible ride at all. Just unimaginative. But the drop was pretty thrilling.

it looks like an amazing ride, but on second thought after watching the video, is a hump after the big drop a good idea after the verruckt accident? i hope they have this figured out!

Looks like a fun ride indeed. Reminds me of the parks first fide, the Texas Splashdown but obviously much better!

This is a ride centered on several gimmicks, but I still think it looks like a pretty good ride. Water rides are always in demand in a place like Texas, so this is a great option for the San Antonio park. I'm also pretty sure this is the next big "Is it a credit?" ride among enthusiasts, which for me I would simply say this: If you consider Journey to Atlantis at the same park a coaster, this should be counted too, and if not, this isn't one either.

This is a good addition to this park, and positioned perfectly equidistant from JTA and Rio Loco (appears to be in the corner by Steel Eel's turnaround). However, I despise all of the Six Flags-esque marketing nonsense to make this seem better/different than other similar attractions. Do parks really think guests weigh these claims of "first", "fastest", "tallest" when making their vacation plans or when choosing to purchase a season pass to a local park? Also, JTA at Sea World San Diego has a vertical lift, and is an actual water coaster, not this bizarre and nebulous "flume coaster" term being used to describe Catapult Falls. I do like the dig here at Six Flags Over Texas, who will be opening a similar launching water coaster next year.

@mbrusco - I wouldn't be concerned with the Verruckt comparison since the ride vehicles here (more like a log flume) have significantly more mass and less aerodynamic drag than the rafts on the flawed Schlitterbahn attraction that had a massive hump (more like Kingda Ka) compared to this.

How hard would it have been for SeaWorld to just call this "North America's first launched flume ride with an elevator lift, featuring the world's steepest drop on a flume ride?" That's good enough to catch my interest, and I am as jaded as they come about new theme park attraction announcements.

I also laughed at the splash from the launch hitting riders as they turn out of the load station. That looks like a nice touch.

I wish SeaWorld would go back to having good theming with their attractions.

@Rave5 - The San Antonio park has always been a bit lighter on theming than the other 2 parks, so this pretty much fits with the other attractions in the Texas park. The problem is that Sea World is following the San Antonio approach at the other parks in the chain that have established much higher bars in terms of theming.

Epcot Gets the Spotlight at This Year's IAAPA Legends Panel