Has Universal Solved the 'Cell Phones on Rides' Problem?

October 21, 2022, 4:07 PM · For nearly two decades now, theme parks have been fighting to keep visitors from losing their mobile phones on thrill rides. No one wants to see a cell phone go flying on a roller coaster - most of all the people in the phone's path, who now are in danger of injury from getting hit.

That's why most parks ban visitors from carrying phones and other loose objects while on high-speed or intense rides, such as roller coasters. Some parks make you keep your items in a pocket, others provide storage bins at the station, while some make you empty your pockets and stash everything in a locker before allowing you into the queue.

A new patent application from the Universal theme parks suggests a change in approach. Rather than trying to keep phones off rides altogether, why not provide a safe system on ride vehicles to accommodate those phones?

In an application titles, "System and Methods to Hold and Charge a Personal Electronic Device on a Ride Vehicle," Universal proposes a way to do that. And yes, as the patent application's title suggests, Universal's system will charge your phone while you ride, too.

Riders would place their phone into a locked case, mounted on the ride vehicle - one that would include a connection to charge the phone during the ride. Riders could access the phone's camera to record on-ride video or photos, but the phone would be held safe by the locking case while the ride was in motion. 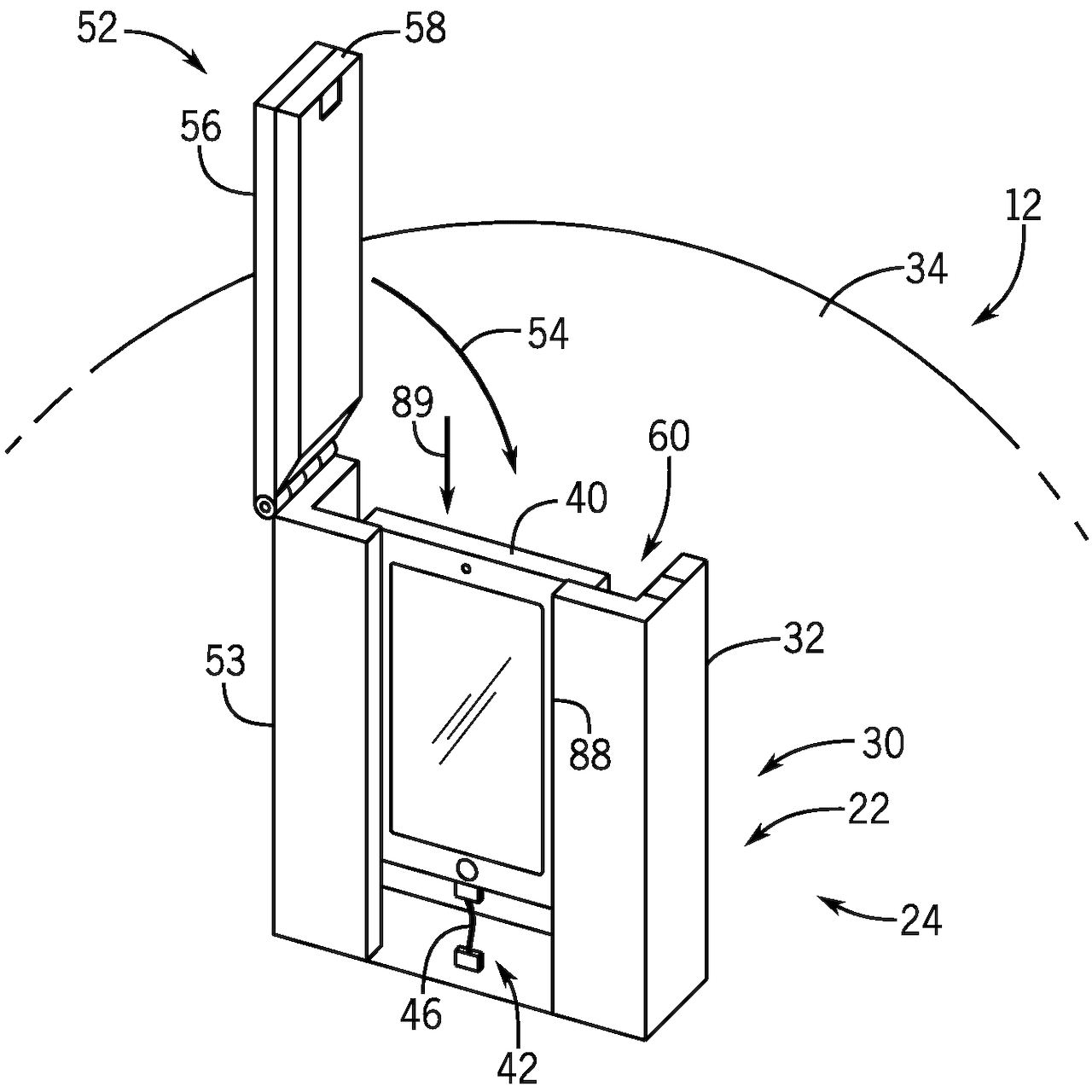 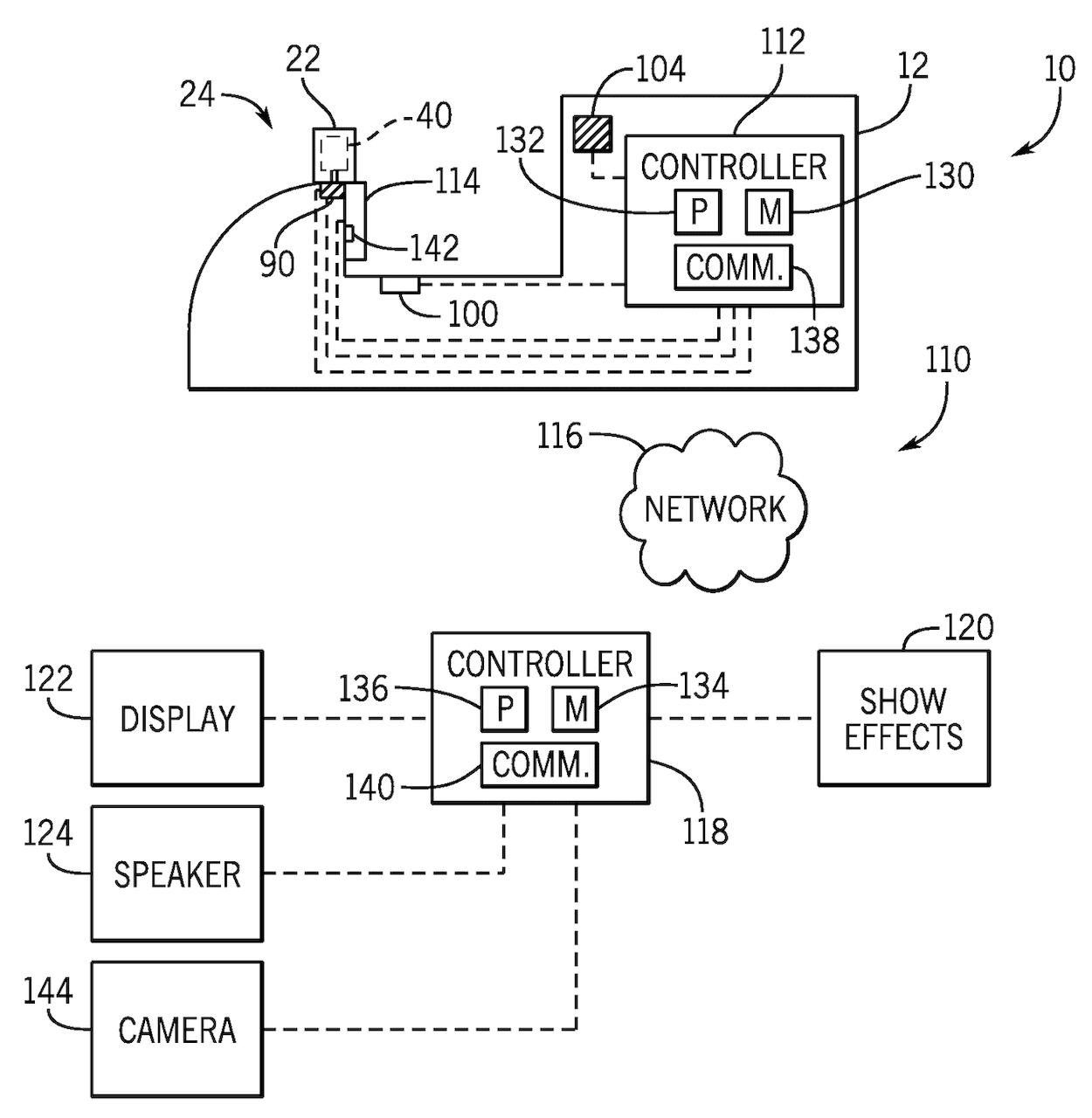 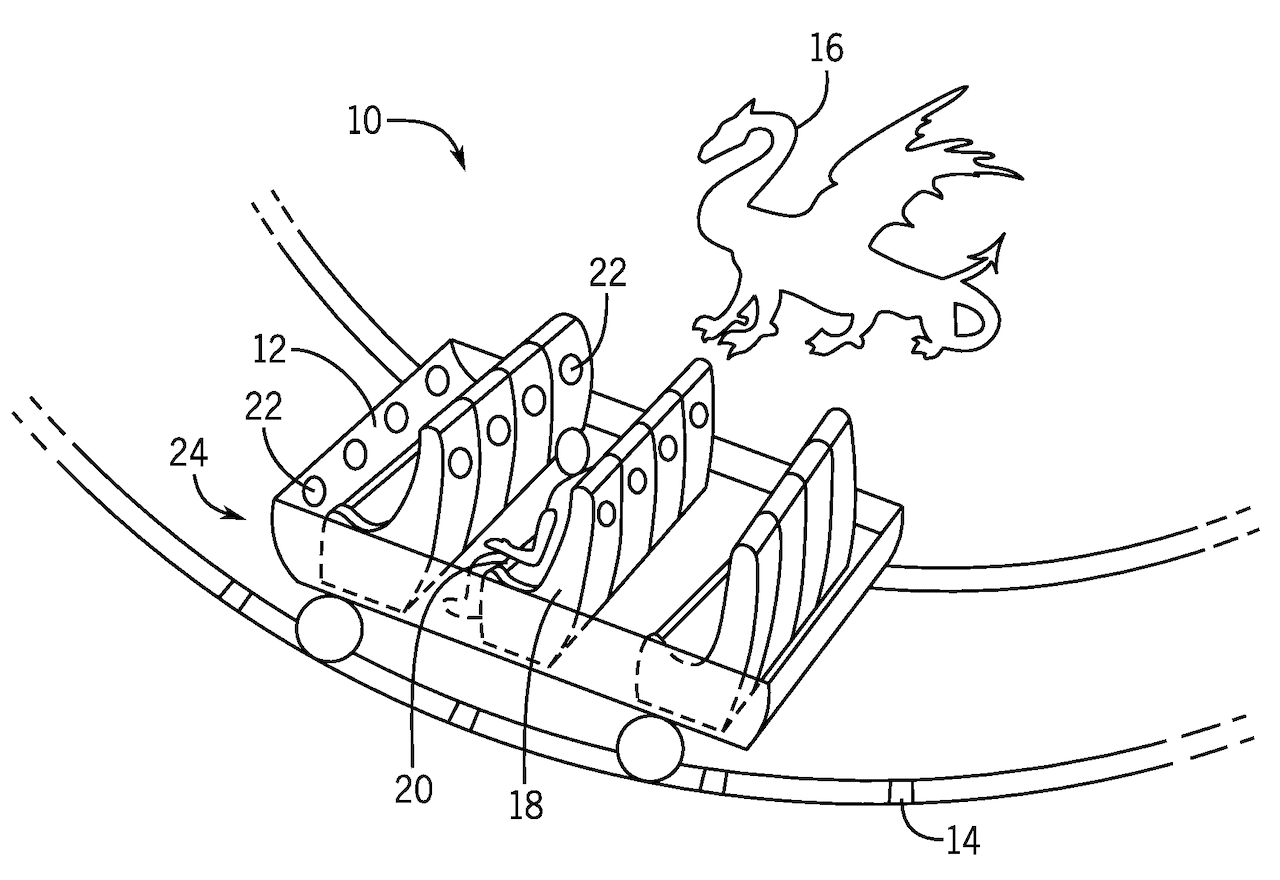 The system in action

In summary - you, your friends, and your family would get the same type of system that working reporters like me enjoy on media days, when the parks install a safe, secure, on-board camera system to record us on a ride's opening day.

Beyond that, this system could enable a next-generation Rip, Ride, Rockit-style experience, or even extend to allow a marriage of multi-player mobile-based gaming to a practical ride environment, through the use of riders' phones to control what is happening on the ride itself.

Universal and Disney file a lot of patent applications as they work to extend the range of what is technically possible on theme park attractions. But this one has me more intrigued, and excited, than many of the applications I have seen. I can't wait to see what Universal does with this. (Could that dragon on the one illustration above provide a hint?)

* * *
Like Theme Park Insider? Please support it! Get the weekly email, or buy attraction tickets, or just Venmo Robert in appreciation for what he does.

Being able to control elements of the ride is secondary to not having to waste time storing phone in mandatory lockers.

Time is being wasted by either placing phones into lockers, or the vehicle not being able to dispatch b/c people take forever putting their phones away in charging pouches. Not sure which one would take longer, but those lockers sure do create bottlenecks.

Plus, it would be costly to have to constantly update their vehicles with different charging cords. They should just utilize a cordless charging system to save time and money.

It's an interesting idea which would save riders a lot of grief although I'm not sure how practical it would be. It might not be user friendly for people like me who have android phones, as almost everyone I know has an iPhone.

Nice idea but the added features (accessing the camera, choosing music) are unnecessary and complicate the concept. It should just be a simple phone holder that also charges the phone.

As someone who has been involved in these things for both Disney and Universal, I file this patent under "Nice Idea - Impractical". Operations team will hate it as someone else noted that it will be a capacity killer. Different size phones and ports will be problematic. And for attractions that have all the show elements to either side of the track (as illustrated in the patent application), the camera will miss all that as it only faces forward. And each rider able to tee up their own audio track? Seriously?

God forbid we go one minute without looking at our phones. If you told me smartphones were part of an Alien plot to fatten, distract and stupefy humanity before the coming invasion, I'd believe it.

Iron Gwazi at Busch Gardens Tampa already does this with a simple zippered pouch below the seat. Absolutely brilliant, doesn't require a patent and I personally find it to be a game changer.

My ‘coaster’ shorts have either strong Velcro or button down fasteners, so where allowed, my stuff usually goes with me on rides. This system would be a nightmare in every way. I cannot understand why this would be seen as a good idea. “Seemed like a good idea at the time” comes to mind.

Universal have already come up with a perfect system for loose items, and that’s the Velocicoaster storage lockers. If this system was found on every coaster, I for one would be very happy. On quiet days, I just leave my stuff in the locker and go round again … and again …. :)

Ha TH, I've often thought someone should make a pair of cargoes, specifically for coaster riders.
How many of us scour the online pages for that perfect pair ??
Customized as well ... LOL !!!

Ah the boomer crowd always finds something to make up or complain about! A few adjustments to this idea makes it great one - why not also have a small storage area built in that quickly snaps shut and eliminate the whole locker snafu!

Yeah, I'd also be interested in seeing how this would affect dispatch times.

This is a clever idea that will ultimately fall into the "too complicated and impractical to execute" bin. It's difficult enough for ride ops to manage guests getting on and off ride vehicles, but to then add this new step where guests are going to spend another 10-20 seconds docking their phone into a box is going to drag attraction throughput into the toilet.

The clear analog here is Hollywood Rip Ride Rocket with the touch screen integrated into the coaster's lap restraint, and even with the physical docking process absent from the coaster's load/unload procedure, you get many guests boarding the trains and spending more time playing on the screens than they do making sure they're seated properly and ready for ride ops to check their restraints.

The idea of being able to safely record your own ride video and/or influence the attraction through your phone is kind of intriguing, but from a practicality perspective, I just don't think this is the brightest idea.

makorider, i've got my coaster shorts too (and pants for winter)...only with zippered pockets. thankfully i grew up in the 80's so was all about zippered clothing! LOL

Very interesting to see this. Especially as have been laser focused on this specific issue for 6 yrs (ever since the tragedy w/the teacher trying to retrieve his cell+wallet after accidentally dropping them off Raptor @Cedar Point). As the creator of a wearable system that's uniquely positioned to solve these (among other) problems, it's painful to watch the gyrations that parks are going through when the answer is hiding in plain sight.
The challenge I see here is if parks spend big $$$ on such a system, they still are ultimately offering a solution that affects guests for only several minutes during their park visits. What about guests' needs to also safely stash their
cell (etc) for all the time between rides? and what about at water parks? While I appreciate the value-add Universal's idea offers with respect to gaming, audio options & photo taking, there is (as other commentors are pointing out) a risk that it'd be time consuming in practice, not fit every model phone, and frankly...after the exhileration of a ride, don't you think there will be some people who forget their phone in there? That'd lead to some folks running back to retrieve their things...
Then you recall the pandemic we were just in/still in...
it might be that having a common bin may also be unsettling for some guests re: germ transference.
Seems to me that the end result is a plus on one side, but quite a few minuses on the other?

Btw, I have to agree with Russell Meyer on his astute observations. People get distracted with the new tech's fun factor so can easily get bogged down with other things (instead of focusing on the importance of safety first).
I can imagine that adding these fancy features and overcomplicating things is likely not good for streamlining the process as far as ride operations is concerned.