Weekly Top 10: The Most Underrated Attractions on Theme Park Insider

April 27, 2015, 11:18 AM · Devoted theme parks fans are always looking for a fresh experience. So this week, let's honor some of the most underrated attractions in America. And by "underrated," we mean that literally. These attractions have earned high praise from the Theme Park Insider readers who've rated them, but they have received relatively few rating votes overall.

Let's not let great attractions go underrated. You can follow the links below to rate and review these 10 attractions. Then click to our Park Reviews page to start rating all the rides and shows you've visited recently, so that we can build an even better database of reader ratings for top parks around the world. 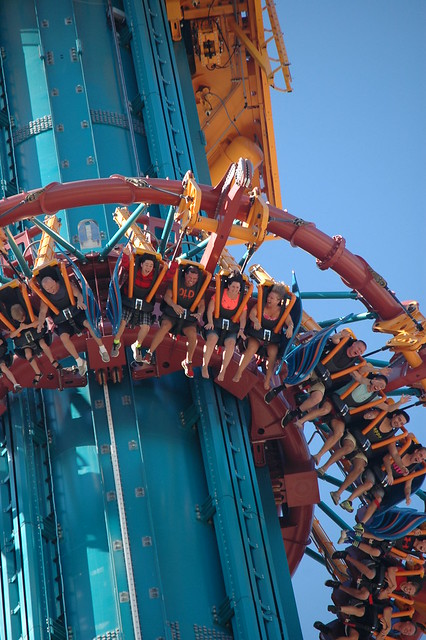 Newer attractions dominate this list, simply because they've not had as much time to attract as much attention as the classics have. But with its thrilling views and unique, face-down drop, Falcon's Fury appears well on its way to becoming one of those theme park classics. The marine mammals get almost all the attention, but many fans think that this show, featuring rescue dogs and other pets, deserves to be rated among the best at SeaWorld.

Yeah, we get it. If you're over the age of 10, you're probably getting a little sick of Frozen at this point. But Mister Smyth and Mister Jones deliver a charming take on Disney's "hottest" hit that will entertain even the jaded parents in the audience.

Knott's refurbishment of its iconic Timber Mountain Log Ride two years ago earned raves. Now, it appears that last year's refurb of the Calico Mine Ride is on its way to earning the same praise. With a sharply targeted audience of families with elementary-ages children, the Legoland parks don't do the huge traffic of Disney, Universal, and other theme park chains. But those who do visit love seeing their children enjoy this fun, yet practical, first experience behind the wheel. Switching to the other coast, Miniland is the heart of a Legoland park, and California's offers everything from a whimsical look around its home state to an impressive collection of Star Wars scenes. Our James Rao wrote about this unique theme park experience for us several years back. Juan Hamilton
April 27, 2015 at 4:20 PM · I agree with all of these. I've been on some of these rides and i've watched the povs for all of them and they are all good experiences that are highly underrated.

James Rao
April 27, 2015 at 5:26 PM · Fun list! I will highlight the fact that a visit to Silver Dollar City is not complete without a tour through the Marvel Cave!

Marc Ricketts
April 29, 2015 at 6:07 PM · I thought the Calico Mine Train was looking really tired and stale in 2003, a prime example of what happens when rides aren't regularly plussed. Now when I ride, I want to get right back on to sit on the other side.