March 28, 2019, 6:04 PM · The next phase of Disney's interconnected Marvel Theme Park Universe has celebrated its opening at Hong Kong Disneyland.

Ant-Man and the Wasp: Nano Battle! opens officially to the public on Sunday, but Disney and Marvel officials joined with star Paul Rudd for an opening ceremony today. Here are the highlights: 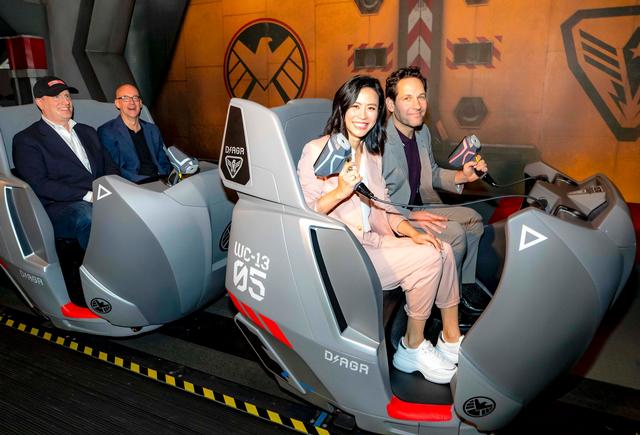 Ant-Man and The Wasp: Nano Battle! replaced the old Buzz Lightyear ride, but the vibe, at least in the queue, is far more like Universal's Men in Black: Alien Attack than Disney's cartoonish Buzz Lightyear adventures. Here is the best queue and ride POV video that we've found:

Coupled with the Iron Man Adventure next door, Hong Kong Disneyland's emerging Marvel land is the first of three planned around the world, including Walt Disney Studios Park in Paris and Disney California Adventure in Anaheim. All three will be outposts of Stark Industries and Marvel's S.H.I.E.L.D. initiative, helping to recruit the next generation of help for the Avengers. (In other words, you.)

We've got the latest details on the planned California Adventure Marvel land ride below.

Not very impressed with that, unfortunately.

Seems like a good time to me. A little on the dingy and monochromatic side though. I think that's one of the challenges and limitations of adapting Marvel properies into rides.

The good thing is Paul Rudd is an actor. He can fake being impressed and enthusiastic about this attraction, which will be an afterthought by next week.

I know not every attraction can be an E-ticket, but having two Marvel attractions, and neither being very impressive is kind of a lousy start for HK.

Looks like a good overlay to me. Since we know Buzz LightYear was a slow-moving family-friendly ride this was never going to be hyper-manic or fast. It is what it is - and remains a family-friendly, people-guzzling C-ticket ride. Every park needs them and I think it's a good re-purposing of the old ride.
Even the Marvel Universe needs gentle C-ticket rides....

You've got to be kidding me. This may be one of the least imaginative ride concepts/designs I've ever seen. It's hard to imagine a less inspired overlay making use of the Marvel Universe IP.

Have to go into the underwhelming line on this one. Not terrible but you'd think it would be more for HK and Disney combining.