Disneyland 'signs up' to ease crowding ahead of Star Wars debut

May 22, 2019, 2:16 PM · The new marquee now stands above the entrance to Adventureland at the Disneyland Resort. 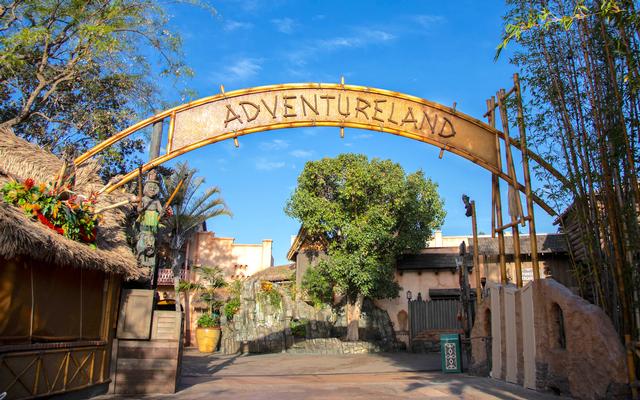 Even though the sign is up, work is not quite finished. Disneyland reps are promising a few more "finishing touches" of decoration to the sign, which Disney chose to replace as part of its "Project Stardust" initiative to increase capacity at Disneyland in advance of the opening of the new Star Wars: Galaxy's Edge land next week.

So how can a new sign affect park capacity? Take a look at the old Adventureland sign and look for the differences. 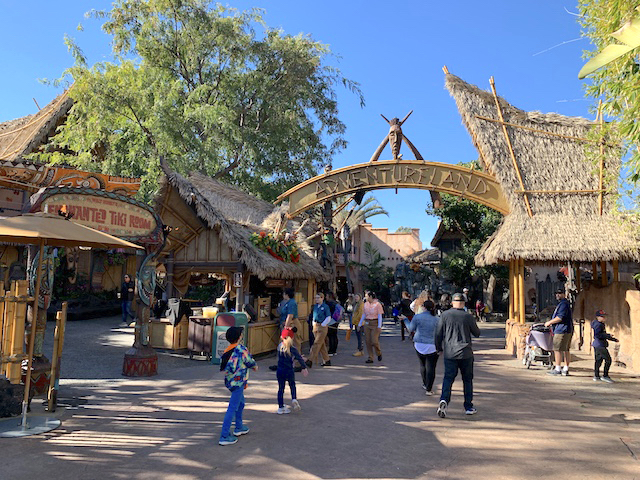 That wing wall and shade structure on the right side of the sign are gone now. That opens up the bridge into the land, widening the available space for people to walk. In addition, the opening of the Tropical Hideaway restaurant around the corner to the left provides a new, larger venue for Disneyland fans to get their Dole Whip fix, allowing Disney to close the queue outside the Enchanted Tiki Room's Dole Whip stand. (You can still order from the inside or use Mobile Ordering at that location.)

Because of that wing wall on one side and ever-present Dole Whip queue on the other, the Adventureland entry had become one of Disneyland's tightest pinch points. Rebuilding the sign and entry will allow Disney to increase guest flow through this area as the west side of the park gets even more slammed with guests heading to and from Galaxy's Edge, starting next week.

Want to learn more about how Disneyland has been working to optimize a 63-year-old park? Check out our previous articles below.

Is that box structure next to the Dole Whip stand a permanent fixture? Seems kind of silly to remove the wing wall in order to create more room and then add something that takes up some of that space.

Also hoping they re-install the tiki mask decor above the sign. It looks kind of plain without it.

Still no sign of relief for the Indy/Pirates/Haunted Mansion problems. The Indy queue, as it almost always does, extended well beyond the treehouse, mixing in with Pirates. No one knew where to go, so they just stopped moving. There was literally a single tight space in which everyone else could squeeze through. Mind you- the HUGE interior line system for Indy wasn't being used, as is usually the case. Imagine if all those people were comfortably inside the queue! So beautiful, so air conditioned, and yet we just walk right through due to the Fastpass point being at the entrance. Then Pirates and Mansion- with stroller parking and the inevitable huge new flow of traffic for those heading toward GE via Hungry Bear, there won't be a space to breathe. And about Hungry Bear- goodbye, dear quiet spot on a crowded evening. It will never be the same. Yet, I'll still go because I love it and I'll somehow make it work.

"the HUGE interior line system for Indy wasn't being used".

I think the title of this articles is a little misleading. I'm already hearing 1-3 hour waits for the new GE Cantina, and a confusing shop layout. I think "ease crowding" is more like just keep pushing it further back into the park.