March 29, 2021, 5:43 PM · Disneyland made a lot of news last week. But one story that's been widely reported over the past few days actually wasn't news at all.

Perhaps you've seen the headlines, something along the lines of "Disneyland Is Building Wakanda." When Disney announced its DisneylandForward land-use proposal, fans treated the resort's concept art like an online Rorschach test. One of the things they thought they found looked like a Black Panther icon. So fans jumped to the conclusion that a Wakanda land was part of Disney's plan to develop its current surface parking lots as new attraction space.

After Disney released its proposal, I warned against making assumptions about specific new attractions - something Disney officials themselves said when presenting the plan. DisneylandForward is a land-use proposal, in which Disneyland is seeking approval to build stuff on land that current rules mandate must be used for parking. That's it. There's no commitment that Disney will build anything on that space, much less the specific attractions that many fans - and too many news publications - are assuming must be coming.

But even setting that aside, Disneyland building a Wakanda attraction isn't even news. Then-Disney Parks Chairman Bob Chapek announced the Disneyland Resort's upcoming Wakanda attraction during the 2019 D23 Expo in Anaheim. Planned as part of Phase Two of the upcoming Avengers Campus land in Disney California Adventure, the attraction was to take guests on a Quinjet ride to Wakanda for an "Endgame"-style battle featuring the Avengers. 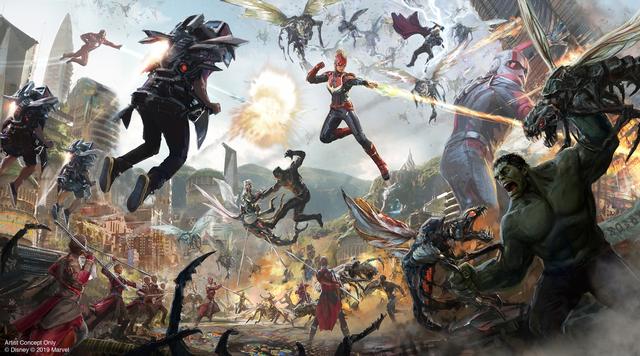 Concept art for Disney's Wakanda attraction, released by the company in 2019

Now there's nothing keeping Disney from building a full-on Wakanda land elsewhere at the resort as part of DisneylandForward, if it wished. Remember that the Star Tours ride in Disneyland's Tomorrowland ends up in the Galaxy's Edge land that Disneyland built on the other side of the park. The precedent has been set for double-dipping an IP in multiple locations in the same park. But why stop with Marvel's Wakanda?

Walt Disney Imagineering has a ton of unbuilt plans that can be developed for inclusion in an expanded Disneyland or Disney California Adventure. Despite Covid-19 layoffs, it continues to employ plenty of Imagineers who can dream up additional plans, if needed, too. Want to say that Disney is going to bring Pandora to the west coast? Mystic Manor? WandaVision's Westview? A Mandalorian ride? An Incredible Hulk coaster? Go ahead. Make up whatever you want. Because Disneyland has committed to nothing at this time beyond opening Avengers Campus and finishing Mickey & Minnie's Runaway Railway at the Disneyland Resort. Any other plan is, at this point, a fantasy.

Wishful thinking is great. I love to see fans get so engaged with the parks that they feel compelled to dream up new attractions. I have encouraged that - and engaged in it - here on Theme Park Insider in the past. But a post saying that "Disneyland Should Build Wakanda" is not the same thing as one that declares "Disneyland Is Building Wakanda."

Speculation is not news, until you can present some supporting evidence that a project actually is on a path to happen.

(In case you missed it, here is my 10-step process to help you better judge theme park rumors. And here is the official seven-step process, direct from the head of Walt Disney Imagineering.)

Disneyland remains one of the world's top tourist attractions. Unfortunately, the public's love for Disneyland has lured too many news organizations, bloggers and influencers to treat anything having to do with Disneyland as click bait. The resort's planned reopening next month helped kick off the latest wave of bogus stories about the parks, from "Disneyland is banning screaming on roller coasters" to "Disneyland announces a third gate." And, yes, "Wakanda is coming!"

This is what happens when publishers look at what Disneyland merely through the lens of generating clicks - and not reporting the truth of what is actually going on there. And it continues when readers reward those click-hungry publishers by sharing their stories.

To be fair, this process plays out now with pretty much every news topic out there right now. The only way it will get better is if readers get a lot more discerning about what they click and share online. The past month has exposed a lot of publications to theme park fans who know better about what's happening at Disney and in California right now. So why should any of us continue sharing stories from publications that consistently have embarrassed themselves with inaccurate stories?

It's up to you. I hope that I have earned your trust - and your clicks and shares - with my work here at Theme Park Insider. It's been a frustrating few weeks for me, watching so many other publications rack up big click and share numbers with stories many of us know to be bunk. So that's why I wanted to speak out today.

As always, thank you for reading, and a special thank you to all who share accurate and insightful theme park stories to your friends, family, and colleagues.

While it was fun to imagine Wakanda due to the Panther in the DCA expansion, I knew that this was all a what if. And I still stand by that area should be a 3rd gate over expansions(It would look awkward as expansions).

Robert, Theme Park Insider is my go-to site for theme park news specifically because of your journalistic integrity and I know when I read the news here I’m not being pandered to or fed juked up nonsense. Keep up the great work!

Is it just me? When I squint real hard I'm pretty sure I can see a Hall of the Presidents in the expanded Disneyland. Then again, I've been putting off getting my eyes checked for awhile now.

@ColinHolmes- agreed. This was a pretty good article Robert.

Nothing is confirmed and no permits have been made. I’d love to get super excited about all of this and let my theme park fan side go crazy but we have to keep ourselves in check in the case that none of this happens and then everyone gets disappointed. I feel like the new parking structure and the toy story parking lot conversion have a much greater chance of following through than the theme park expansions.

"Hall of the Presidents in the expanded Disneyland" made me laugh harder than I have in days. Thanks for that!

I will join in the speculation fun and say Disney will build a Star Wars: Galactic Starcruiser at the expansion site.

Honestly, it'll be years before this gets the okay let alone ideas.

Disney learned their lesson from the "Disney Decade" announcing scores of stuff that never came close to coming true, they're holding until they know for sure it can happen.

As MikeW said this will be years before we get it.
Between the approvals and the designs and the build, my thoughts are the 'lands' shown are possible placeholders for the real lands for later the new lands might be themed to IP they don't have in the public consciousness yet (X-Men, Fantastic 4, new Star Wars or even something Disney that is in the works)

Or just as likely is they haven't decided yet

its is the best blog.I Read it all.thanks For sharing.
https://whatsappinstalling.com/

If someone is Disney reads these comments, please fix Tomorrowland! The 1998 reimagining didn't work, and the land needs a new vision instead of the hodgepodge of ideas and Pixar IP that is there now.

Surely there is enough imagination in Imagineering and political will at corporate Disney to come up with something visionary and exciting.

I mean, the concept art specifically says "for illustrative purposes only" -- which could be "things may change" or could mean "we're expecting negotiations on expansion to take two years (as Disney said), and we're just snowballing ideas here, but not announcing anything concrete."

I'm also curious how this would be an "expansion" and not a "third gate" mixed in amongst the Disneyland Hotel and the Disneyland Pacific Hotel. Will these be A-E ticket attractions like the old days? Would people with a ticket to Disneyland or California Adventure for that day (or that trip) just be able to ride?

But as answers are a long way away, I don't blame Disney for trying to convince Anaheim to work with them on mixed-use land.