Disney to Spoof Itself on New Jungle Cruise

April 26, 2021, 11:21 AM · It looks like Walt Disney Imagineering is planning to lean into the meta with the final scene in its revamped Jungle Cruise ride. Disney just released some concept art of that scene, and it appears that Trader Sam is now running... a gift shop.

That theme park rides end with gift shops is a well-established trope in the themed entertainment design business. (Bansky lampooned this 10 years ago.) Disney is rescripting its Jungle Cruise ride to eliminate racist caricatures of indigenous people, including the headhunter Trader Sam. In the new scene, Trader Sam has converted the Jungle Cruise's lost and found into a gift shop... and is off to parts unknown "finding some new inventory." 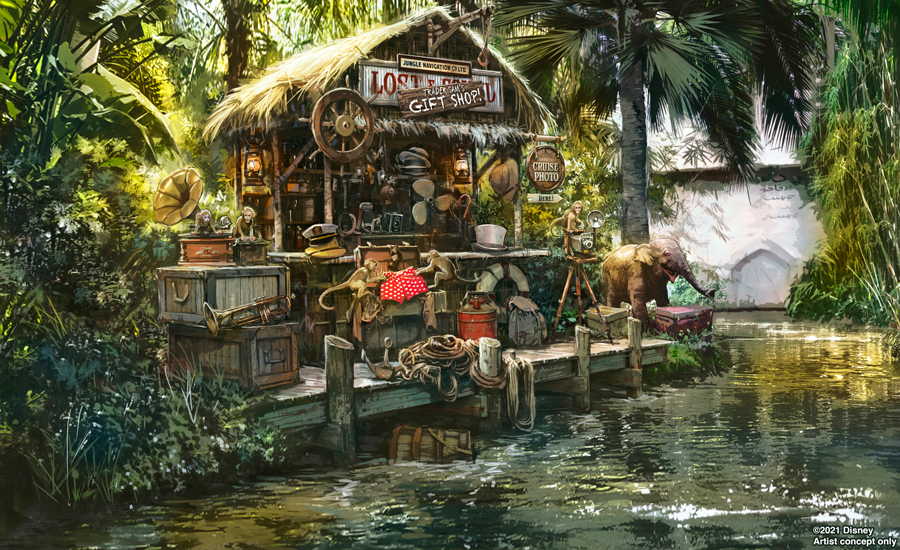 With Trader Sam off site, the jungle animals have taken over the store, which also appears to include a new on-ride photo feature.

By eliminating Trader Sam from the scene, Disney is recasting him as a bit of a MacGuffin - a device to move along the story but that often is not revealed. In addition to running the new Jungle Cruise "gift shop," Trader Sam also runs bars at the Disneyland Hotel and Walt Disney World's Polynesian Resort, so he has become an important character in Disney's theme park storytelling.

But - other than the fact that he is the Jungle's top entrepreneur - we no longer know what this character looks like, so that creates some opportunities for future surprises. (Getting in right now to stir a rumor about Trader Sam being revealed as Alberta Falls' long-lost half sister Samantha Falls... or as Alberta Falls herself.)

Disney already revealed that it will be incorporating Falls and the Society of Explorers and Adventurers in its Jungle Cruise reboot. Remember that Alberta Falls' role in Disney's SEA story is converting her grandfather's jungle riverboat delivery company into a tourist attraction. So the new story here seems to be less about the perils of the jungle itself, but the perils of running a jungle-themed attraction.

Which Disney has become quite the expert on, hasn't it?

A fun touch and nice way to handle a tricky character.

Strong Bad E-Mails made this joke almost 2 decades ago.

That being said, this is a great upgrade.

Hmm are we sure the on-ride photo thing is for real? Surely it will only capture half of the passengers, or will it lead to a rush of all passengers crushing in to one side to be in the pic?

Stevenz - I've already thought about that. I'll bet if it is real, they will conceal several cameras along the bank of the river on both sides to capture multiple images during the journey. Then at the end of the ride, you will get a chance to see a variety of images captured during the ride.

The PC-ization of theme park rides is a nauseating trend, but I hope they'll take the opportunity to improve the ride, particularly with more up to date AAs. On a related topic, if they're going to mess with my Splash Mountain, the new version needs to be at least as good as the classic original (not bloody likely).

Disney is one the leading WOKE corporations who take the fun out of everything that they touch whether it is Disney theme parks, most of their PC films and ESPN which they ruined. Disney looks for every opportunity to bombard us with advertising, overpriced theme parks and expensive streaming platform. Walt would fire everyone of these 'Execs." This was started by Eiger and perfected by the greedy Eisner. Year after year the tyrannical Eiger was listed in most business publications as one of the top overpaid corporate executives.

@StilaFan: I am happy the changes don't include an AA Dwayne Johnson or such and more spirit of the ride (the bit of the monkeys on a half-sunken boat is a gag so obvious I'm amazed it wasn't done years ago).

For Splash Mountain, still tricky to see it working but hopefully still pretty good. Again, I"m just amazed it's taken over 30 years to finally make a change to it.

@davehr - Really? If you're going to rant about something at least get your facts and spelling right. Michael Eisner preceded Robert Iger (not Eiger) as head of Disney, and since when did Walt Disney decide to use you as his earthly conduit?

Woke or not, Disney provides terrific products that entertain millions of people around the world, and they have every right to maximize their profits to the greatest extent possible, and if they overprice their market, then the market will correct them.

I like this new Jungle Cruise design! Disney theme park is a great place for spending a vacation with friends and family members to have a lot of fun and joy. It is sad that due to lockdown we can't travel or visit entertainment places like this. But I hope after vaccination the situation will become better. By the way, you can read some points of view on vaccination at https://gradesfixer.com/free-essay-examples/vaccination/ webpage. There are a lot of samples on different topics. Thanks again for your post!

@Tim: With @DaveHR misspelling Iger's name and stating he preceded Eisner has Disney's CEO along with his rant, I can't tell if he is serious or not!

In 3 points.
a/ Headhunters existed. All over the world. https://en.wikipedia.org/wiki/Headhunting ....shying away from the blunt fact it existed, by "wiping out memories", is falsification of history. (When we do Holocaust denial, we are criminals! When we do the same to the so called indigeous memories, we are racists ? VERY bizarre biased morality.)
b/ Some tropical rivers really had headhunters. No tropical river at all had a lost and found stall.
c/ Disney is always choosing for money. Whatever the reasons and pressure behind the decisionmaking. So, this "change" will not be about the content, but how it appeals to the eye. That's it.

Disneyland Reopens Friday. Here's What You Need to Know

Vote of the Week: Should Disney Bring Back Fastpass?