July 15, 2021, 3:10 PM · The Walt Disney Company is moving much of its Disney Parks, Experiences and Products division management from the Los Angeles area to central Florida, company officials announced today.

The move will affect some 2,000 cast member positions and happen over the next 18 months, company officials said. Disney's theme park division management will be moving to a new regional campus located at Lake Nona in the Orlando area.

"Initially, our new campus will be home to more than 2,000 Cast, Imagineers and employees - driving further collaboration and creativity and allowing us to better integrate our business and functional teams," Disney Parks Chairman Josh D'Amaro wrote in a letter to cast members. "While we are still determining exactly which of our team members will be based there, we expect that most Southern California-based DPEP professional roles that are not fully dedicated to the Disneyland Resort or, in some cases, the international parks business, will be asked to relocate to this new Florida campus. Certain corporate roles that primarily support DPEP, along with a few other select enterprise functions will also move to this campus."

Disney will notify all affected cast members by November 1, with transfers to be completed by December 2022. 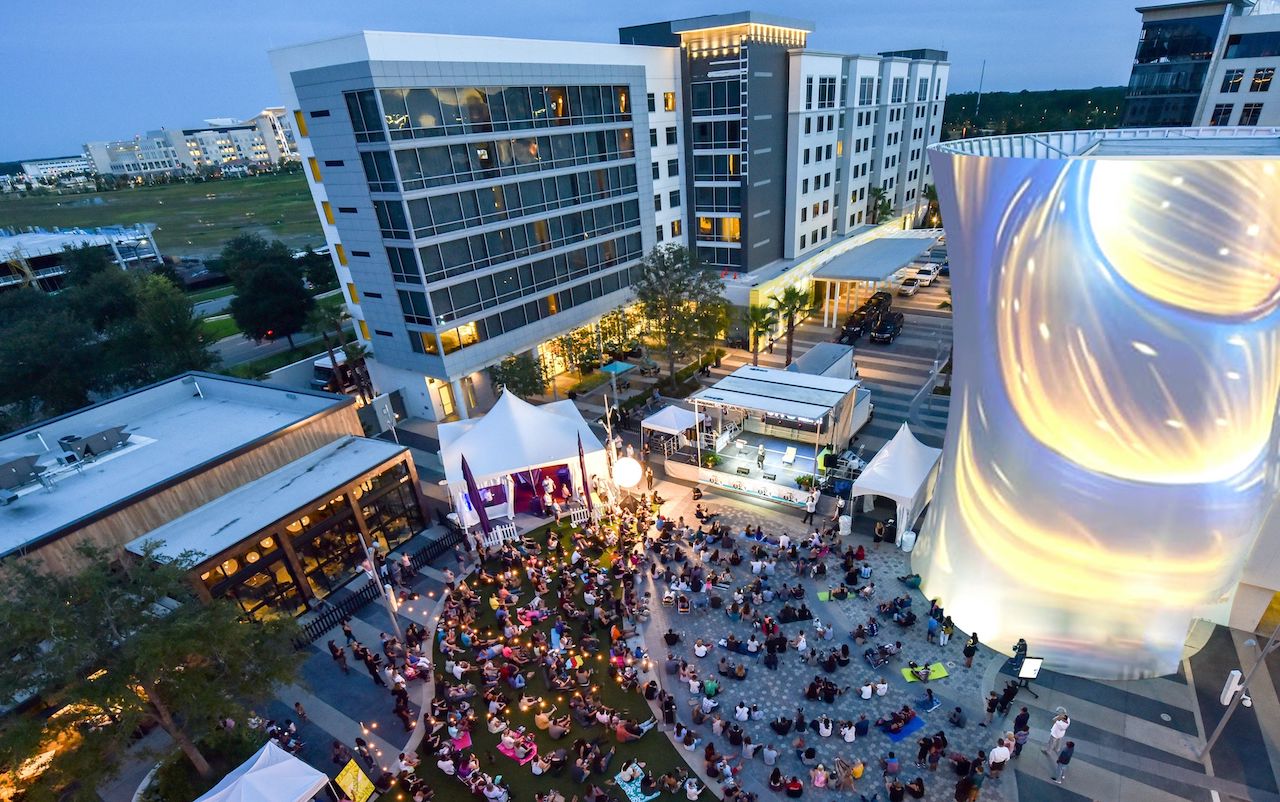 Universal Studios hemorrhaged talent when it moved Universal Creative from the LA area to Orlando years ago, as many businesses do when they relocate to new metropolitan areas. After all, many people make the decision to live somewhere based upon more than a job. So while positions might be moving east to central Florida, many cast members may choose instead to seek new work at home rather than to move - which no doubt will save Disney money both in not having to pay relocation and in paying lower entry-level salaries for replacements in Florida.

The move has been rumored inside Disney for some time now and may have contributed to some of the recent retirements and departures from the company of long-time cast members.

"As someone who has moved with my family from California to Florida and back again, understand that relocation is a big change, not only for the employee, but also for their families," D'Amaro wrote. "Therefore, moving these roles to Central Florida will take place throughout the next 18 months, providing flexibility in timing to accommodate individual situations and needs. I recognize that many of you will have to make a significant decision in the coming months and we are committed to approaching this project and all who are impacted with the utmost care and compassion. I want to personally assure you that we will provide the necessary information, assistance and relocation resources to support those of you that will be affected."

Ultimately, this represents less than five percent of Disney's full-time jobs in southern California, given that the Disneyland Resort-specific jobs as well as film, television, streaming and corporate management operations will remain in the Los Angeles area.

Do you have any information why this move is taking place?

Gotta love those Florida taxes, especially when compared to California. Will this move also relocate WDI in Glendale?

Yep. Disney is spinning this as an opportunity to bring WDI and DPEP management closer to all the ops already headquartered in Orlando, but this means separating WDI from the Disney Studios and Disney corporate HQ, which will remain in Burbank. So where you gain advantages in proximity on one side, you lose them on the other.

Given the "Great Resignation" that many are predicting for this year anyway, plus the fact that companies typically lose a large percentage of their workforce when they move, what percentage of WDI will quit in the next 18 months? Curious to find out.

In answer to the original question, yes, this is about allowing high-level Disney executives in the Parks division to move to a state without income tax.

Boo on WDI leaving Glendale. It will be a loss of moving a historic site from both Disney and theme parks.

WDI will keep some positions in Southern California to support Disneyland and likely the Asian parks. So it could keep the Glendale building, since that's part of a larger Disney campus there. Much remains to be determined.

More surprised they didn’t see this as an opportunity for remote working. Does every bean counter really need to be in HQ?

My wife’s employer is going completely virtual, removing the barriers where they can recruit to national ones. My employer can’t as we deliver local services but is going to include remote in the mix.

For things that have to be done in person, it probably makes sense to be in Florida, WDW has the space to create, and if Universal already made the switch it probably assists in recruiting and sourcing outsourcer/freelancers.

With CA getting more and more difficult for businesses to survive, so many have left the state to others with less tax. Also makes more sense since that department has more of a presence in Orlando with four Disney parks, two water parks, and dozens of resorts with just two parks and three hotels in CA.

This is one of those things rumored for years and as Potscott points out, when the majority of park stuff is in Florida, makes sense to have it there.

Thanks for the reply, Robert. I continue asking: being an artist myself, I love living in a creative artistic city like Vienna, surrounding me with other artists from different fields and having the opportunity to experience art, performances and museums on a regular basis.
I've only visited the Orlando area for a short period of three weeks and Los Angeles for two.
However, my impression is, California is way more open and creative and accepting of people with a different lifestyle.
Add to that food, beach, mountains and real city life, I wonder how many talented people are willing to make the move and stay in Orlando.
Of course it is good for this area to attract more diverse people but do those want to come at all?

Robert: what do you mean by the "great resignation"? Are you referring to a specific person or group? Or a larger exodus of WDI talent?

/\ The great resignation is in reference to how its projected that 40% of people (not Disney, people in general) have/are going to quit their jobs over the next year for a new one.

This move is just common sense and 50+ years overdue, the only reason the parks are ran out of socal is because that's where the company HQ is and they can be with the CEO. As great as a business that DLR is, the theme parks/travel division should be next to WDW not DLR, WDW is just way more substantial and important in every way. Also i'm glad they are putting this in Lake Nona as that area is better setup for expensive houses for high income people, and the area around the parks should be zoned for higher density and lower income and traffic there is already bad enough.

Also i'm hoping this has a side effect of WDW being maintained better. It's no secret the parks at DLR are maintained better than WDW and it can't be a bad thing to have more executive eyes watching over things. Also its pretty funny that Josh D'Amaro started his statement by saying "something we have been planning since 2019" because you know this is going to be all over the news since California kept DLR closed for so long.

Ignoring the political realities which will undoubtedly make this move a no-brainer for Disney cost-wise, I'm still surprised this wasn't done sooner. Yes, it makes some sense to have this division in the same area as the parent company. But, so many meetings and document exchanges can now be completed online. Combine this with the fact that both Disney World (including several hotels) and Disney Cruise Lines are based in Florida and the move makes perfect sense.

It’s not that businesses are struggling to survive in California, it’s that many don’t want to pay for taxes and would rather pocket that money to buy more yachts or something stupid rich people love to buy.

The reality is that it's expensive to operate a business in California. Office space/real estate, something WDI in particular needs for their work, is extremely expensive in California even before you consider the high taxes on those properties and overall operations. Then you need to consider the higher cost of living in the SoCal region, which is more than double what it is in Central Florida (mostly because of high housing costs), which means Disney would need to pay employees based in the Glendale complex far more than those in Orlando to keep them on the payroll.

Also consider that it sounds like most of the positions being moved are mid to high level white collar positions that are almost assuredly upper-middle class (likely in or very near 6-figure income territory). Keeping those highly compensated employees happy (well paid) is a lot more expensive in California where the COL is growing at a higher rate than in Florida. An employee can live quite luxuriously in Florida on $250k/year, but might need $300-500k/year (or more) to live a similar lifestyle in SoCal.

Additionally, most of these employees are not likely tied to a single direct revenue source/project (i.e. overhead). WDI employees assuredly accrue time on projects that are funded by the organization (not "overhead" in a classical way), but their costs are not connected to any direct revenues generated by Disney or its Theme Park Division. By moving these non-revenue generating employees to a cheaper part of the country (like how many companies outsource certain aspects of their operations like IT, billing/invoicing, HR, and accounting), Disney can recognize an overall cost savings on their overhead burden, which undoubtedly is taking a hit because of increased labor costs at the bottom end of the payroll spectrum.

Maybe, just maybe, the next attraction will have cover for shade, rain and airco from the start.
It's also much easier for the good Imagineers to hop over to the best theme park resort Universal Studios.

Other than the obvious executive tax breaks, it doesn't make any sense creatively to move the majority of operations to Florida. The big benefit of being located in LA is the access to the massive talent pool of artists, designers and engineers already located in Southern California. Florida doesn't even hold a candle to CA when it comes to talent pool. Disney will have to outsource a large chunk of its pipeline to LA-based design firms after this move happens.

I think there are quite a few reasons they are moving, but I really do not think taxes is the main one. Disney still has its headquarters in California. They are still the Hollywood company they have always been.

I think the move comes more down to opportunity. Disney World has four parks in the top five most attended parks in America (Disneyland is the fifth). Disneyland, as great as it is, works more of a living museum to their roots than an entertainment venture. Plus, Disney and Universal have become more reactive to each other so if Universal moved, Disney would move. The pandemic showed how much both react to each other and how much they actually work together to push local policy. Disney and Universal is the unholy alliance that rule central FL.

Woof, if my employer said I had to move to central florida to keep my job, I'd have a new employer. No amount of saved taxes is worth that move.

Character Dining Is Coming Back at Disneyland