Disney Enchantment debuted tonight in Walt Disney World's Magic Kingdom, on the eve of the park's 50th anniversary. The new fireworks show is much more than that, also delivering projection mapping animation on Cinderella Castle and, for the first time, down Main Street USA. 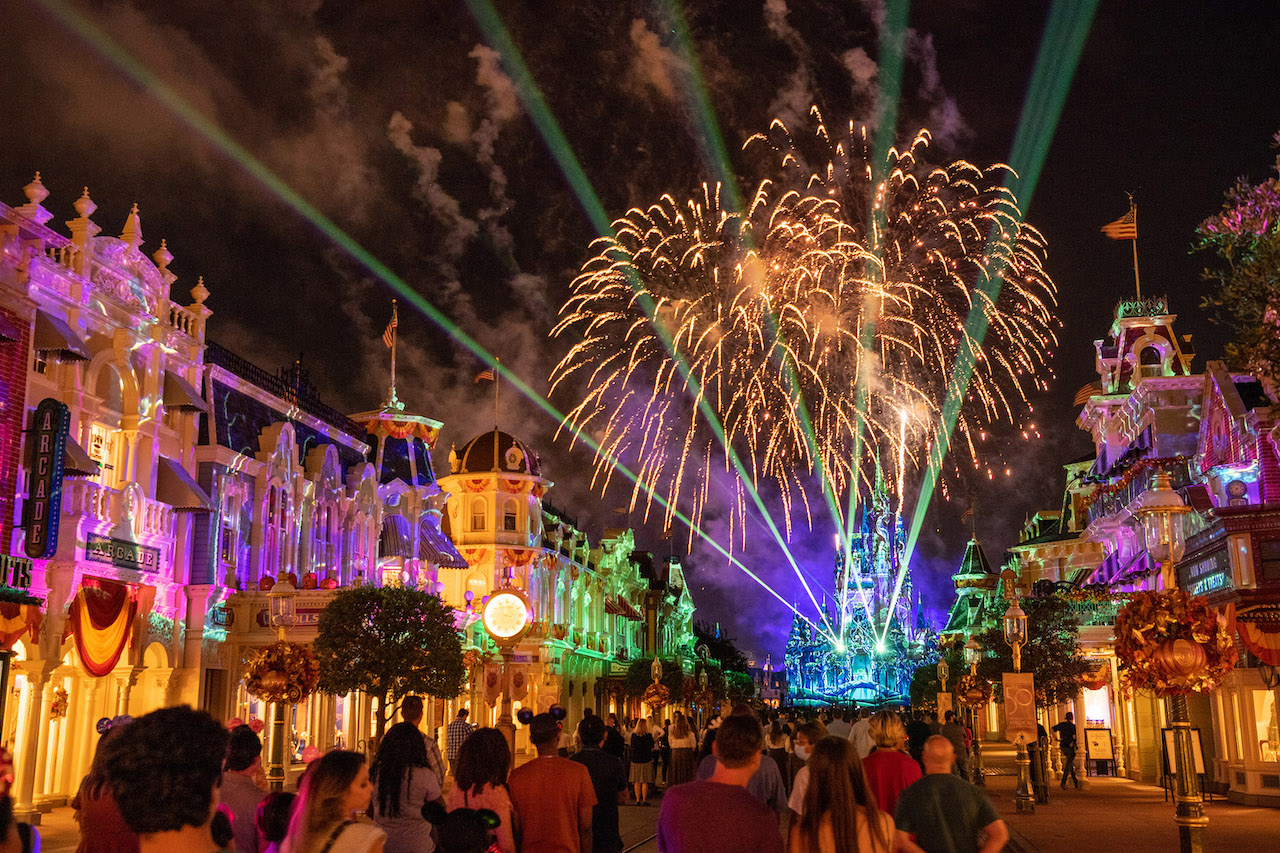 The show kicks off with an original song, "You Are the Magic," by seven-time Grammy winner and former Walt Disney World cast member Philip Lawrence. It's the upbeat Disney anthem one would expect in a show such that this, but while it follows a formula - it's a formula that works.

After the song, though, Disney Enchantment falls into the same trap that ensnared Harmonious last night - too much talking. When I wish upon a star, as Disney asks me so often to do, I wish that Disney's show producers would grab a big, red marker and cut from their nighttime spectacular scripts all the momentum-sapping dialogue. Don't interrupt an emotional moment to tell us that we should be having an emotional moment. Stop the monologuing, and let's keep the show rolling.

Because when Disney Enchantment flows, it delivers the emotional arc that was missing from Harmonious. A reader last night asked for music from "Frozen 2." Well, Disney Enchantment delivered that with "Into the Unknown," setting the stage for a darker moment that would allow some contrast with the inevitable light. When the show followed that with Modest Mussorgsky's "Night on Bald Mountain," I actually cheered - something rare for this jaded old theme park veteran.

After the past year, it's appropriate for Disney to recognize that this celebration follows a time of despair for many of us. But beyond that, in every time-tested Disney story, the triumph always follows the test. The victory at the end only comes after something goes terribly wrong along the way. Great nighttime spectaculars deliver narratives along with their images and effects, and dark moments of conflict or doubt drive those narratives.

No, the narrative here is not as clean and compelling as that in the superior Disneyland Forever - the fireworks celebration of the west coast elder sibling's 60th anniversary six years ago. Disney Enchantment also fails to anchor itself to the resort it is celebrating. Absent any callouts to the resort's attractions, it could play at any Disney resort around the world.

But that does not diminish the sense of triumph at the end of Disney Enchantment. "I Am Moana/Song of the Ancestors" provides the turn that sets us back to the light, just before more unnecessary and annoying talking interrupts the momentum. But the show soon recovers, Tinkerbell flies from the castle, and we hear the reprise of "You Are the Magic" to bring us back to where we started - inspired and recharged by the journey.

Do you know why Disney took their own live stream recording down from YouTube?
Was it because of the incredible amount of negative comments?
If you want fans see roast another new Disney show, take a look at the comments on Harmonious on YouTube ...

The new song You Are the Magic really makes this show what it is, a great success! Congratulations, Magic Kingdom, you have another fantastic nighttime celebration!

My first thought on the steam was to wonder if there was a rights issue with the Christina Aguilera performance at the start of the show - that they’d negotiated only live performance rights and not publication rights.

Disney just reposted the show. Xtina is there, so that wasn't the issue. But it looks like they fixed the stream's audio/video sync problem.

Thanks for checking and answering Robert!