To do that, let's start by looking west, to Universal Studios Hollywood. Like Disney and other theme park companies, Universal has established a tradition of installing clones of popular attractions at its other theme parks. Unfortunately, the last time that Universal Orlando imported an attraction from its sister park in California, well, things did not turn out as Universal had planned.

While Fast & Furious: Supercharged wowed visitors as the finale of USH's Studio Tour, the attraction has bombed as a stand-alone experience in Universal Studios Florida. So much so that Universal executives have expressed regret over creating the attraction.

A previous Studio Tour import, King Kong 360:3D, also did not fare as well with Orlando fans as it did in Hollywood, despite Universal plussing the experience for its stand-alone Orlando installation. So let's just forget about bringing Studio Tour encounters to Orlando anymore, shall we?

That still leaves several options for Universal Studios Hollywood attractions that could make the trip east, however. For our Vote of the Week, we would like to hear which one of these California attractions you most would like to see come to Florida.

For our first candidate, let's start with The Secret Life of Pets: Off the Leash! animatronic dark ride that debuted last year.

Also on the Upper Lot, Universal Studios Hollywood has extended the Minions theme around its installation of Despicable Me Minion Mayhem with Super Silly Fun Land, a collection of kiddie rides a water playground. 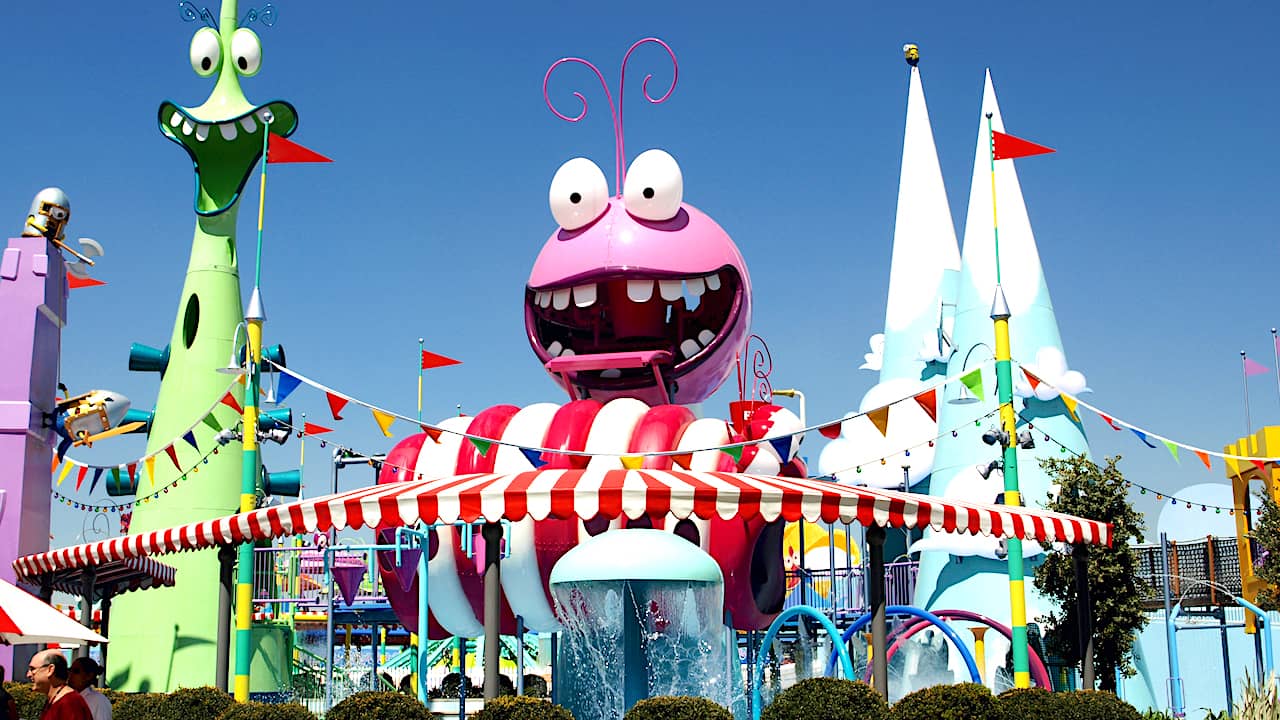 That one's probably redundant to the attractions in USF's Woody Woodpecker's KidZone, but I am offering Super Silly Fun Land up as an option for those Orlando fans who would like to see a retheme for Florida's kiddie land.

Speaking of rethemes, let's not overlook a biggie - Jurassic World - The Ride.

Many Universal Orlando fans have been expecting Universal to convert the Jurassic Park River Adventure to Hollywood's new version of the ride, to match the Jurassic World theme of the VelociCoaster next door.

But there's one more Universal Studios Hollywood attraction that Orlando does not have. In fact, Orlando is Universal's only theme park resort not to include this iconic, live-action, stunt spectacle - Waterworld.

So there you have the candidates. Let's put this to a vote.

If you would like to see any of these attractions for yourself, in person, remember that our travel partner offers discounts on Universal Studios Hollywood tickets. And for more theme park news and advice, please sign up for Theme Park Insider's weekly newsletter.

I say bring 'em all. Waterworld is a universally-loved hit show and the parks could really use another one. As for Secret Life of Pets, I wonder if they could shove it in the area currently occupied by Barney or Curious George and just give the kids area a generic Illuminations retheme (or Super Silly Fun Land, whatever). What USO really needs is more things that are suitable for all ages and body types/heights.

It is amazing how Waterworld the stunt show has had a bigger impact than the movie ever did and frankly surprised they never took it to Orlando (maybe thinking "it's a West Coast thing", who knows). So I voted for that even if I think more likely Jurassic Park ride change is first then Secret Life of Pets.

Now for flip side, a USO ride that should be moved? As this article states, Fast and Furious is terrible as a stand-alone (especially replacing the fun Disaster ride) and taking that out should be good.

To me, the most obvious is Jurassic World. Being how popular the movies are. Also, it matches the theme of Jurassic World with VelociCoaster.

As great as a show WaterWorld is, I don’t think it’s necessary to bring that to Orlando. Although still great, it’s an older show. Why bring an older attraction over? Most theme parks I think would rather focus on new attractions, as opposed to older ones.

The Secret Life Of Pets in another obvious one too. That could definitely easily be inserted into Orlando. Kung Fu Panda makes sense too, as opposed to a walk through Minions attraction.

You all know where I stand on this.

Not from Hollywood, but I’d love to see Beijing’s Jurassic World Adventure make the jump to Orlando. It looks incredibly impressive from videos, so i can only imagine how much more so it is, in person.

An appropriate follow-up question to this poll would be when would we "guess-timate" another E-ticket might open at USF?

The obvious answer would be Waterworld, because it would be the easiest to bring to Universal Orlando. IOA already has a vacant theater (Sinbad) that could easily be transitioned to accommodate the stunt show. The problem is that the resort already has a relatively new stunt show over at Borne, so could they support two stunt shows so close to each other (though the two would be very different experiences)?

I don't think Kung Fu Panda makes much sense even though transitioning the old Shrek theater would be simple to do as it would be a nearly identical changeover from what was done in Hollywood. I always felt that Shrek was a bit duplicative once USF added Minion Mayhem across the street, so simply changing the theming over to Kung Fu Panda wouldn't create a different enough of an experience from the Despicable Me attraction.

However, converting the Shrek theater to Secret Life of Pets would be perfect, and practically mirror what you have at USH with the practical effect's driven dark ride in close proximity to the Minions. Given the shape of the Shrek theater is probably a bit different than what existed over in USH, UC could probably make some slight changes to the attraction to make it unique from its Hollywood sibling.

I think converting to Jurassic World is a natural progression, but I think that should ONLY be done when Universal Creative is ready to completely retheme the land and build an additional attraction to the area, not just a reskin of the existing flume.

When has FnF ever wowed people on the studio tour? Been a bomb and pretty much universally panned since it opened.

Great assessments from team TPI ... Any idea when construction will start on any of these concepts?

I don't think the old Sindbad theater is big enough for Waterworld, though it's close. And maintaining the pool would require major, major infrastructure work. If UOR really wants Waterworld, adding it to Epic makes the most logistical sense, to me.

As for timing, USF got Men in Black the year after IOA opened. I suspect we will see USF get something big, shiny and new the year after Epic opens, too.

Russell Meyer, don’t get me wrong, I love the WaterWorld attraction at USH. However, why would USF want to bring an older attraction to their park? Yes, it would be new for them…so I understand that. But WaterWorld, the movie, came out in 1995. Why bring over an attraction from a movie that came out 27 years ago?

@timbo23 - UC is rumored to be installing a Universal Monsters land in Epic Universe, and aside from the Tom Cruise Mummy flop, the source of those IPs are decades older than even Waterworld. Waterworld as a theme park attraction is iconic, and would absolutely be a massive hit in Universal Orlando. It's just a matter of whether it would undercut the existing Bourne stunt show.

You don't have to tap a recent movie to be successful.

@Russell Meyer, is definitely an iconic attraction…no doubt about that. I just don’t think USF necessarily needs it. The attraction is actually more popular than the movie itself ever was.

If you look at the recent universal attractions, they focus on more recent movies like Harry Potter, Despicable Me, Jurassic World, etc. True, you don’t necessarily need to use recent movie to have a successful attraction…but it targets more crowds when people actually know the movies.

Who claimed Harmonious wad a new attraction? It's a different product for Disney to promote, but surely you can see how replacement, re-skinned, re-imagined concepts are different than the opening box JPVC or ROTR. USF is going to be going a very long time without a new concept.

By the way Russell, why the quick jump to Disney v. Universal tribalism?

So Harmonious is not a new attraction, but Disney Springs is a theme park? ;^)

I should not be pouring gasoline on this fire, but, here I go....

BTW, Bourne is an amazing show, and well worth watching when at USF - even if it gets overlooked because Universal opened it during the depths of the pandemic, when almost no one was paying attention to stuff like this.

For once, I will take a different approach to TH's quandary and say that I concur that USF needs something big before Epic Universe arrives. One only needs to remember that Universal's attendance tanked in the years leading up to Hogsmeade. Hence why they fast-tracked Transformers and Springfield so that people wouldn't hold off their vacations until Diagon Alley opened.

Escape rooms coming to CityWalk = Now it's a themepark!