July 14, 2022, 2:41 PM · Six Flags Magic Mountain opens its 20th roller coaster Friday with the debut of Wonder Woman: Flight of Courage. An adult can tackle as many of 15 of those in a day if everything falls perfectly into place - namely, that lines are short, all of those rides are operating and the hypothetical person in question has a higher tolerance for coasters than your author.

Nobody, I presume, questions Magic Mountain’s dominance on the roller coaster scoreboard. Cedar Point long ago stopped trying to compete in this arena; Cedar Fair’s Sandusky-based flagship park slumbers with a meager 16 coasters (if you count the stagnant former world record holder, Top Thrill Dragster). That reduces the coaster-hoarding debate, such as it is, to one of diversity, theoretically allowing mega-thrill parks to prune their collections.

That doesn’t seem to be the Los Angeles area park’s view on things. Wonder Woman, as it will likely be known to locals (the flat ride whose name it cribbed will not live long in the memory - this is the way at Magic Mountain), fills a kind of niche at Magic Mountain. It also accomplishes a macro-level goal for what was the Gotham area of the park and is now a larger, better-connected D.C. Universe area.

The single-rail coaster, provided by current it-kid Rocky Mountain Constriction, is unique and delivers a joyous minute-long jaunt through the 3,300 feet of track. Wonder Woman: Flight of Courage delivers three inversions and something akin to the journey Six Flags hoped Green Lantern: First Flight was going to provide all those years ago: a thrilling, repeatable people eater. And then came its darkest night.

Wonder Woman brings some life to a stagnant area of the park: Gotham. (The jokes write themselves, don’t they?) Six Flags has not been in the taking-care-of-the-toys-it-has business during my adult life, opting instead for refreshment by way of investment. That has meant new coasters at a breathtaking clip and at times a haphazard approach to the rest of the park. 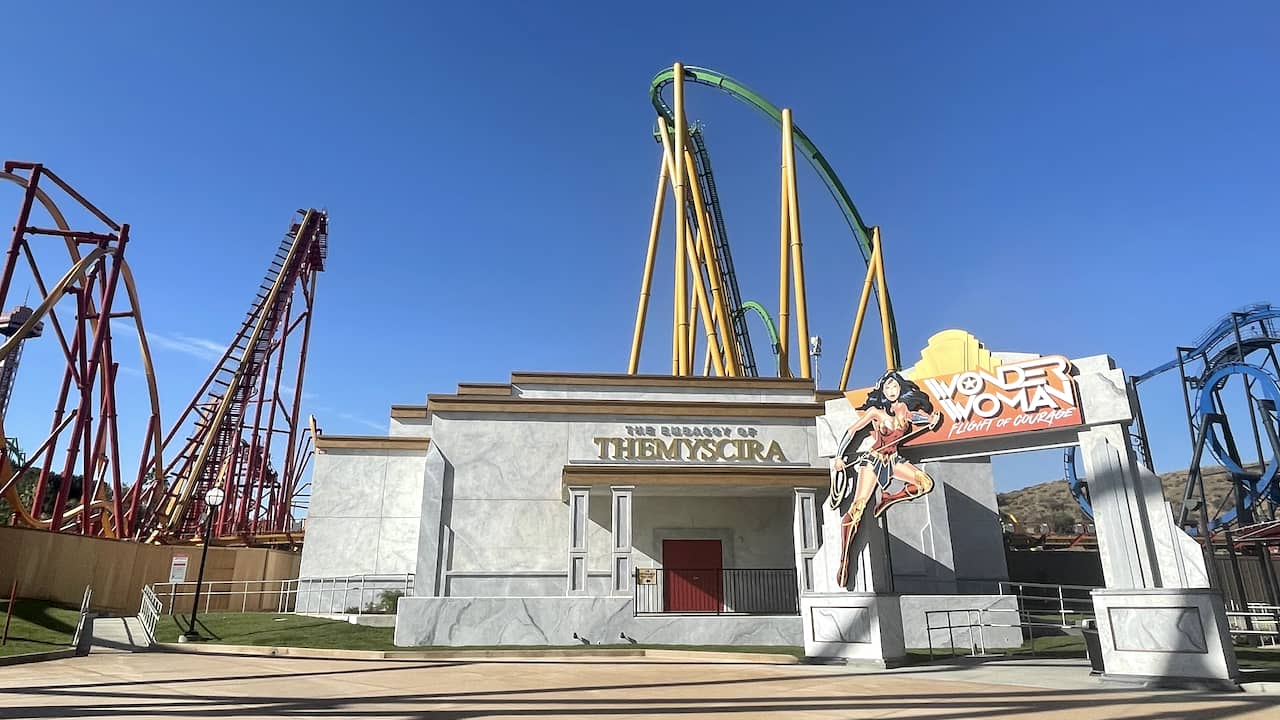 The new coaster will come with a slightly renovated plaza, including a new store and a rethemed flat ride. The station, dubbed "The Embassy of Themyscira," creates a nice entry point for the coaster, but you’re left looking at a lot of concrete. That’s a recurring problem around the northern loop of the park; I don’t know if you’re aware, but it gets hot in Valencia in the summer. The high on Friday is 101 Fahrenheit and there is no shade in the plaza.

But the coaster? It’s brilliant. Six Flags Magic Mountain does not lack for land, to the point that a “land-locked” coaster like Wonder Woman feels free to explore despite not touching any of the park’s borders. RailBlazer, a smaller, more compact RMC Raptor at the soon-to-be defunct California’s Great America, is an absolute joy; Wonder Woman feels like a revelation because of its ability to stretch its legs.

That does not make it remarkably different from its Eastern sister, Jersey Devil, with whom Wonder Woman shares more personality traits than RailBlazer. While RailBlazer is more akin to the Premier Spaghetti Bowl coasters of yore, Wonder Woman is most similar to an out-and-back wooden coaster... but with inversions. Think Blue Streak but with zero-gravity stalls and barrel rolls. It’s a graceful, exhilarating experience that serves as a complement to its next-door neighbor, Batman: The Ride.

Its near-clone nature will matter little to the scores of riders (myself included) who have yet to experience Jersey Devil, the former record holder among single-rail coasters. That’s just another billboard-filling, mouthful of a record that Six Flags Magic Mountain added to its quiver this summer.

The boarding process for the coaster is guest- and employee-friendly, and the layout of the station is well thought-out. The restraints do not feature a secondary seat belt, so the only impediment to this attraction’s capacity is the number of passengers each train carries (12). Crews were dispatching trains at clips as quick as every 45 seconds during media previews, but expect that to be closer to once a minute, which would give the coaster a capacity of around 720 riders an hour.

Looks like fun!! And you are correct about the lack of "shading" in that area of the park! Still, this is a welcome addition & helps enhance the overall DC theming aesthetic.

Was waiting for this to open before heading to the park this summer!

In the main entry plaza of the new D.C. Universe area there is a lot of concrete and not a lot of anything else. They planted a couple very young trees in that area but we'll be in the dirt before that creates meaningful shade in the area. That's an issue in whatever they're calling the Full Throttle area as well. It's a tough area for Six Flags to be cheap — making your guests more comfortable is what allows them to spend more time in the park and that's what allows them to spend more money.

Much like Green Lantern was (and Jersey Devil is at SFGAdv), guests should approach this new "coaster" as more of a flat ride given its limited capacity and compact footprint. There's nothing wrong with a park with solid flat rides, but guest expectations, especially at a park that is notorious for slow moving queues (some in the BLAZING SUN) and poor maintenance and operations that slashes optimal ride throughput like the nothing in your pockets policy that forces e-stops on the moving loading platform to kick people off the train who try to break the rule.

I do really like Jersey Devil, particularly when we were able to twice with ZERO wait a few weeks ago after a thunderstorm cleared the park, and was bummed when Wonder Woman at SFFT was still closed after issues with the first RMC single rail coaster during our visit a couple of weeks ago. These coasters are a fun change of pace, particularly in parks that have lots of BIG coasters, but guests just need to approach this new coaster with the appropriate expectation.

Agreed — if you can wait until the off-season to ride this coaster ... I would do it. Remember, Magic Mountain now operates 365 days a year ... that is a lot of days with light attendance. If you don't care about being the first to ride, you might get a chance to enjoy wonderful weather and a tremendous number of rides on a coaster with light use.

For an indication of how much I dislike this park, it has added four world class coasters and a 400+ foot tall drop tower since the last time I have been there, and I still have no desire to go back.

Can the ride run more than one train at a time? The similar Superman ride at Discovery Kingdom handles only one train, so even a small line takes for friggen ever.

It can run two trains at one time (I saw it with my own eyes) but that was all they were running today. Jersey Devil enthusiasts will know better than me if there’s any actual utility to running four trains or if we’re talking about adding two stacked trains.

I suggest rewatching the POV, Superman at Discovery Kingdom is absolutely nothing like this ride? haha

I really think some of you are seriously underestimating the capacity of Wonder Woman, especially compared with everything else in the park. The ride is designed to operate with four trains, and if operated efficiently should be doing approximately 900 riders per hour. For comparison, the park's four B&M coasters typically do 600 to 800 riders per hour depending on the speed of the crews and guests, and even Twisted Colossus with three 24 passenger trains typically only has actual capacity numbers of around 700 riders per hour (fun fact: RMC's theoretical capacity for Twisted Colossus and Wonder Woman Flight of Courage are actually identical...960 riders per hour). Unless there are major flaws with the boarding process, Wonder Woman should be on par with or even better than the other major coasters at Six Flags Magic Mountain. There's a reason Jersey Devil's wait rarely gets much over a half hour...when it's running all four trains, it has the second highest throughput numbers of the park's coasters, beaten only by Nitro.

Anyway, I'm going on Sunday to ride Wonder Woman Flight of Courage for myself, and while I'm not expecting a new best coaster at the park, I am excited about another fun ride to enjoy at one of my local parks. This one has been taunting me as it rose over my past couple visits to the park, and I'm looking forward to seeing if the reports of it being an improved version of Jersey Devil prove accurate.

Jersey Devil definitely can run 4 trains. The blocks are...

That gives the coaster 2 extra blocks as a buffer when they're running all of the trains. Wonder Woman appears to have a little extra track to allow for even more buffer in the brake areas before the station too.

"The ride is designed to operate with four trains"

and tatsu is designed to run with two stations, amiright!

Nice write-up. Although this coaster is ten feet taller than Jersey Devil, I wasn't expecting it to be appreciably different. Both coasters are an improvement over the 1st generation single rail models. And as Russell said, Jersey Devil can operate with four trains; every time I've ridden it, with the exception of media day, all four trains were running, making for great throughput. No reason why Wonder Woman can't do the same, especially considering the speed of the loading process.

A pox on those that made me run to the passholder preview & public opening, even though most of you lacked commitment, slowed to a walk, and got beaten by a 60 year old in sandals! One apparently healthy kid couldn't even keep it going as far as Full Throttle; do schools even have PE anymore?

I forgot to comment here after riding on the 17th, but I just wanted to give my experience re: capacity...

On my visit, Wonder Woman Flight of Courage opened about an hour late due to new ride delays, which caused a line to back up out of DC Universe and into the neighboring Boardwalk area of the park (for those that know the park, it reached approximately back to where CraZanity is). Once the ride opened, it took 45-60 minutes to get on, not including a brief bit of downtime. After the initial rush worked its way through the ride, the coaster hovered in the 20-30 minute range for the rest of the day. The coaster was running four trains all day and hitting interval practically every cycle, so the line moved extremely well and I was able to get three rides on it with ease. I've heard this ride is programmed for 80 trains per hour with four train operation and the continuously moving station, which gives a capacity of 960 riders per hour if every seat is full. Seeing how it was running, I'd say they're getting pretty close. As a comparison, here's some capacity targets I got from a friend who used to work there (note these are targets...actual numbers are usually about 70% of these):

So my guess about Wonder Woman being right at the to of the park capacity-wise is probably pretty accurate.

As for the ride, I'd say my statement of it being a better version of Jersey Devil is pretty accurate. The ride runs smooth and is intense enough without being too much. It has airtime over most hills, keeps up its speed the whole way around, and while not a long ride, doesn't feel short either. Among those in my group who had done both, this was the unanimous favorite, and while I haven't decided on its exact placement in SFMM's extensive line-up, it's definitely in the park's top five somewhere and is (in my opinion) the best coaster to open on the west coast since Twisted Colossus.