Disneyland Looks to 'Toon' Up Its Runaway Railway

September 13, 2022, 1:42 PM · Let's dive deeper into the detail of some of the attractions Disney announced at its D23 Expo last weekend - starting with the Disneyland installation of Mickey & Minnie's Runaway Railway.

Disney featured the attraction in its Disney Parks pavilion on the D23 Expo show floor [Take a Sneak Peek at the D23 Expo and Disney Parks Pavilion] and Disney Parks Chairman Josh D'Amaro showed off some new concept art from the ride's queue during his presentation Sunday morning [New Rides and Old Favorites Coming to Disneyland, Disney World]. 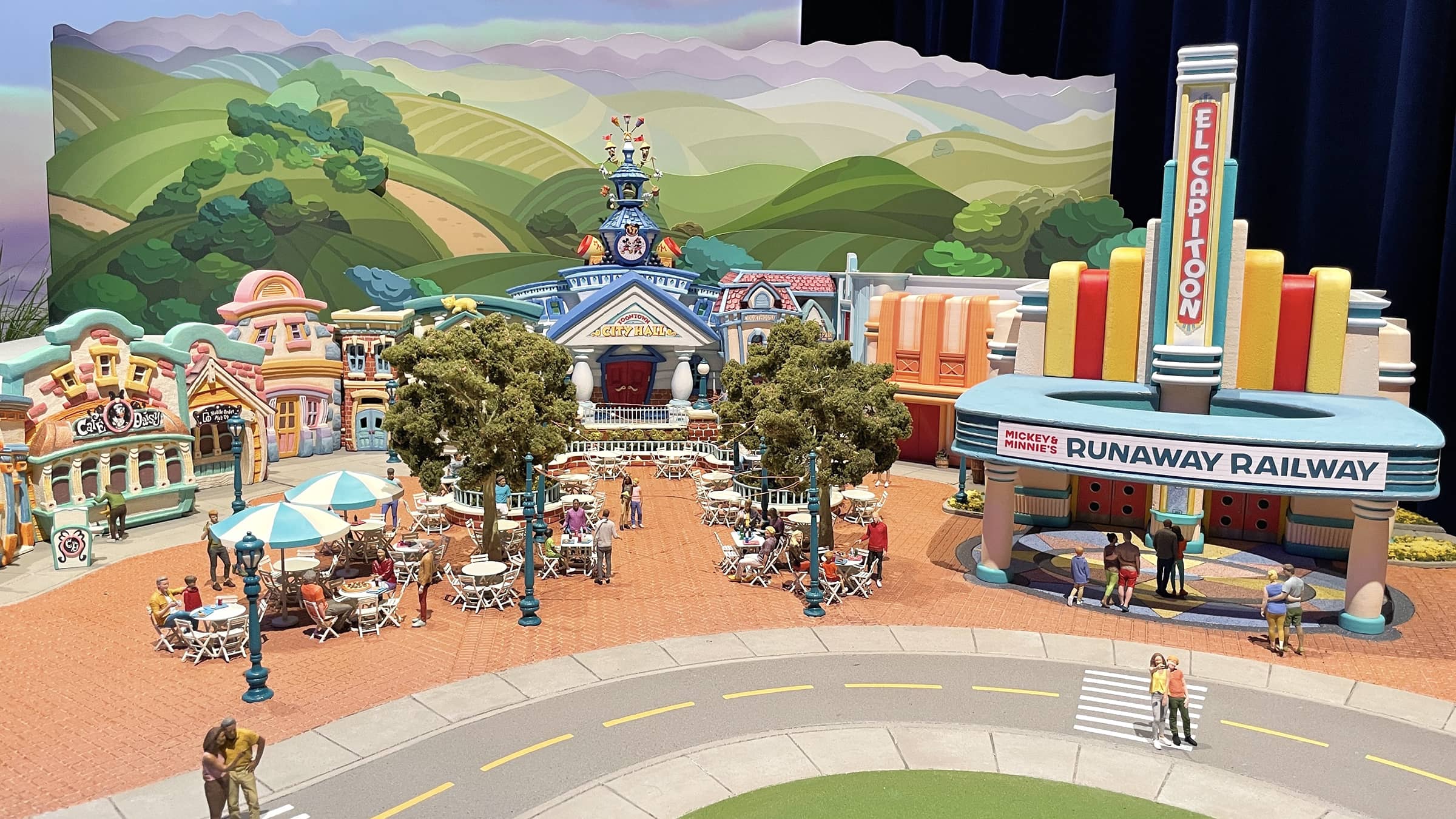 After D'Amaro's presentation, I was among a small group of individuals invited to walk through Disneyland's Mickey & Minnie's Runaway Railway with Disney CEO Bob Chapek. Having loved the original installation at Walt Disney World [Disney gives Mickey Mouse a wild ride with 'Runaway Railway'], I was happy when Disney announced that it would bring the attraction to Disneyland. Now I am even more excited, because I know that we are getting the better version here on the west coast.

Starting at the preshow and continuing through the ride experience, Runaway Railway in California will play almost exactly the same as it does in Florida, Disney officials have said. Guests with sharp eyes and long memories might notice a few minor changes in layout due to the different shapes of the sites upon which Disney built the attractions in each park, but the big change in California comes before you reach the preshow theater to watch the new Mickey Mouse short, "Perfect Picnic."

Walt Disney World placed this trackless dark ride in the Chinese Theater at the heart of Disney's Hollywood Studios, but Disneyland's installation is going into a refurbished Mickey's Toontown. Florida's Chinese Theater is a reproduction of a real location in Hollywood, but Disneyland's Toontown is pure Hollywood fantasy. The "El Capitoon Theater" that Disney has set the ride in here might name-check a real place - Disney's El Capitan Theater - but the cartoon setting allows Disney's Imagineers to extend the madcap spirit of the ride into its queue.

Which they have done, from the concept images that Disney has released. 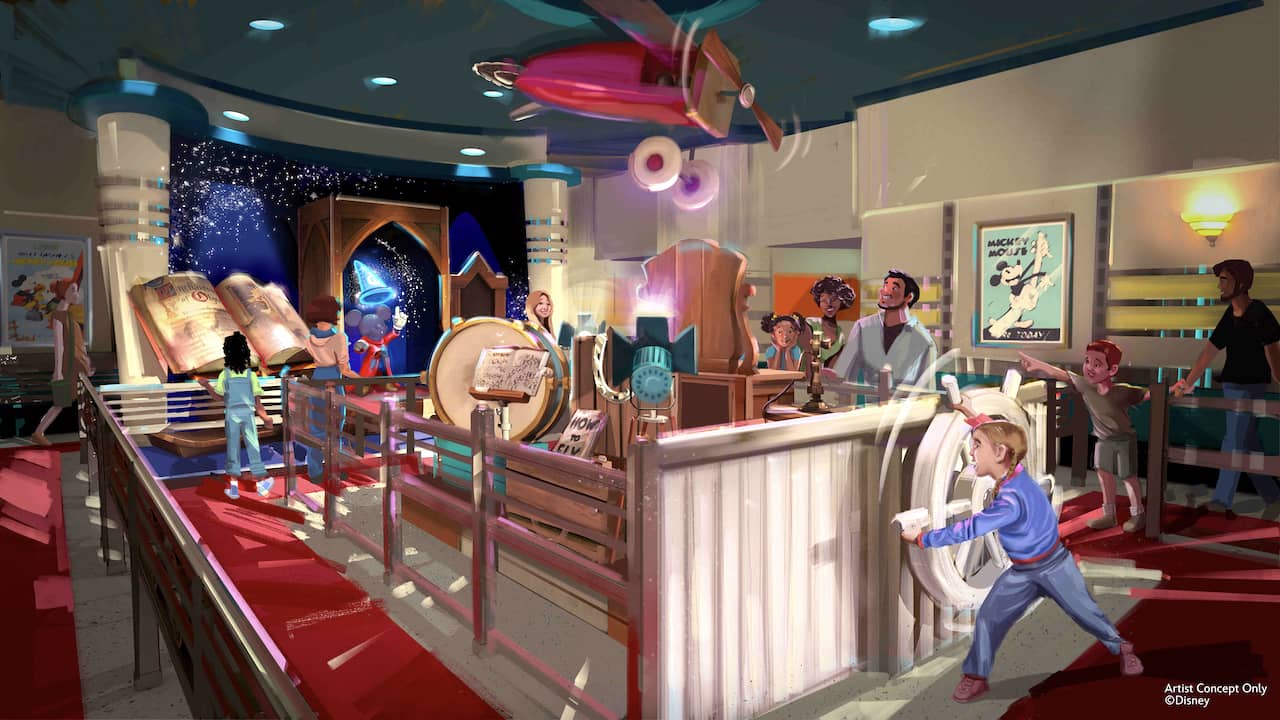 The concept art shows "props" from various Mickey Mouse cartoons over the years, displayed in the queue. It's a great gag, playing off the many theme park queues for movie-based attractions that display props in their queues. 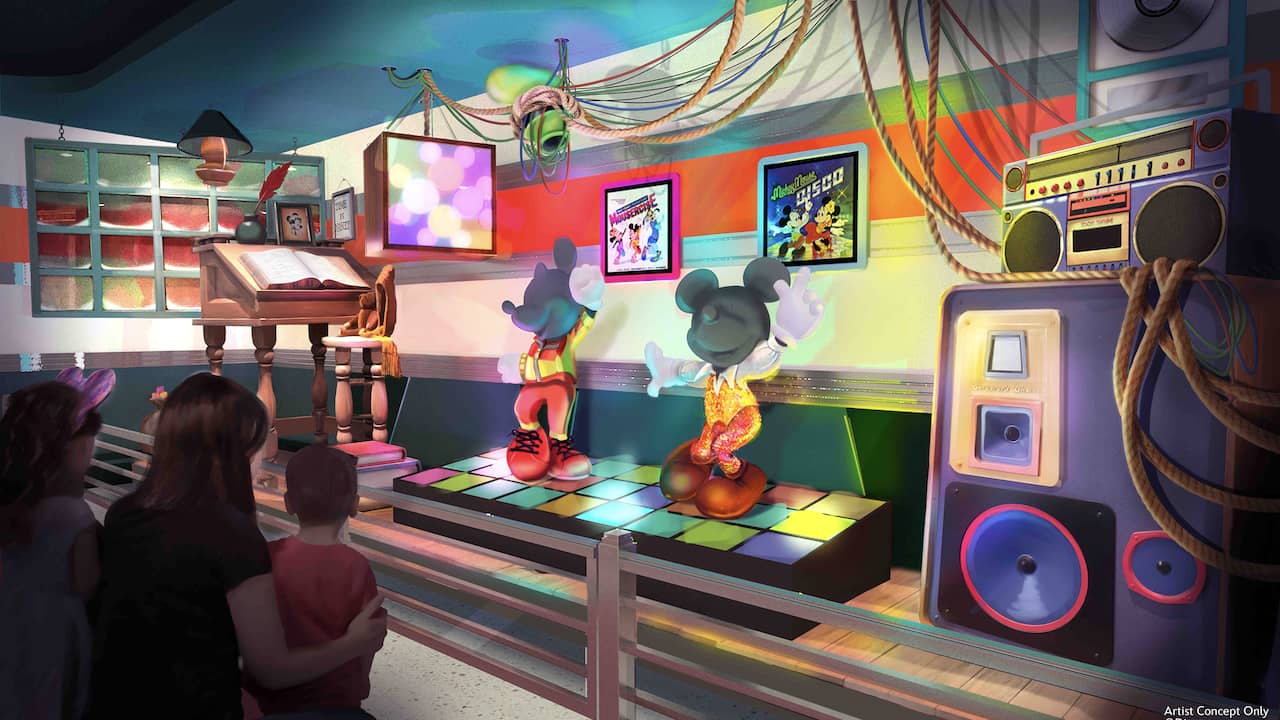 I can't tell you more about the surprises that Disney has in store for you in the queue, beyond what it has shown in the concept art. But I can say that the queue delights throughout. It's essentially a walk-through attraction of its own - a bonus Mickey & Minnie attraction even before you get to the main feature of the Runaway Railway ride.

Mickey & Minnie's Runaway Railway and the new Toontown will open at Disneyland sometime in early 2023. Stay tuned for more as we approach the official opening date. Meanwhile, enjoy our on-ride POV from the ride at its original installation at Walt Disney World.

Nice addition and great queue (love the ‘70s disco Mickey and Minnie). Wish there was a Toontown in DHS.

It sounds like Disneyland will definitely have the better version of MMRR. Robert, if you were to guess, what month do you think Toontown will reopen next year?

Well, the Disney 100 celebration and new nighttime shows debut in late January. So it comes down to - does Disney want one big press event in early 2023, or two?

and if they can place that second one in the vicinity of another theme park's new attraction opening to suck up some of its oxygen, I'm sure that would be perfectly fine with disney.

@Robert Niles, so do you think Toontown will open late January? Or, do you think it will debut spring/summer 2023?

Did we ever get an answer on whether the refurbished Toontown will include a walkway to Galaxy's Edge?

Loved this attraction! Had my first ride last December. I’m glad Toontown is getting its well-deserved revival.

@Keith Schneider The '70s Mickey and Minnie definitely remind me of that old song that the "New Mouseketeers" sang back in 1977: "Disco Mouse" (I probably am not allowed to share a link but if you're unfamiliar, it is on YouTube).