Surfing on a Roller Coaster? It’s Happening in Orlando Next Year

October 18, 2022, 10:22 AM · The next generation of stand-up roller coasters will come to SeaWorld Orlando next year with the debut of Pipeline: The Surf Coaster.

SeaWorld completed its 2023 attraction announcements this morning with the reveal of the new coaster at its flagship park - an announcement that had been delayed by the arrival of Hurricane Ian. For a moment, the “high surf advisory” that SeaWorld had been teasing became quite unfortunately real.

Nevertheless, Pipeline should elicit far more enjoyable thoughts of oceans waves, with a surfing theme that fits the stand-up orientation on the coaster, where the trains will be designed to look like surfboards.

Pipeline: The Surf Coaster will feature a top speed of 60 mph and a unique “wave curl” inversion, according to the park. The Bolliger & Mabillard coaster will top out at 110 feet and run over 2,950 feet of track. The height requirement is expected to be 54 inches. 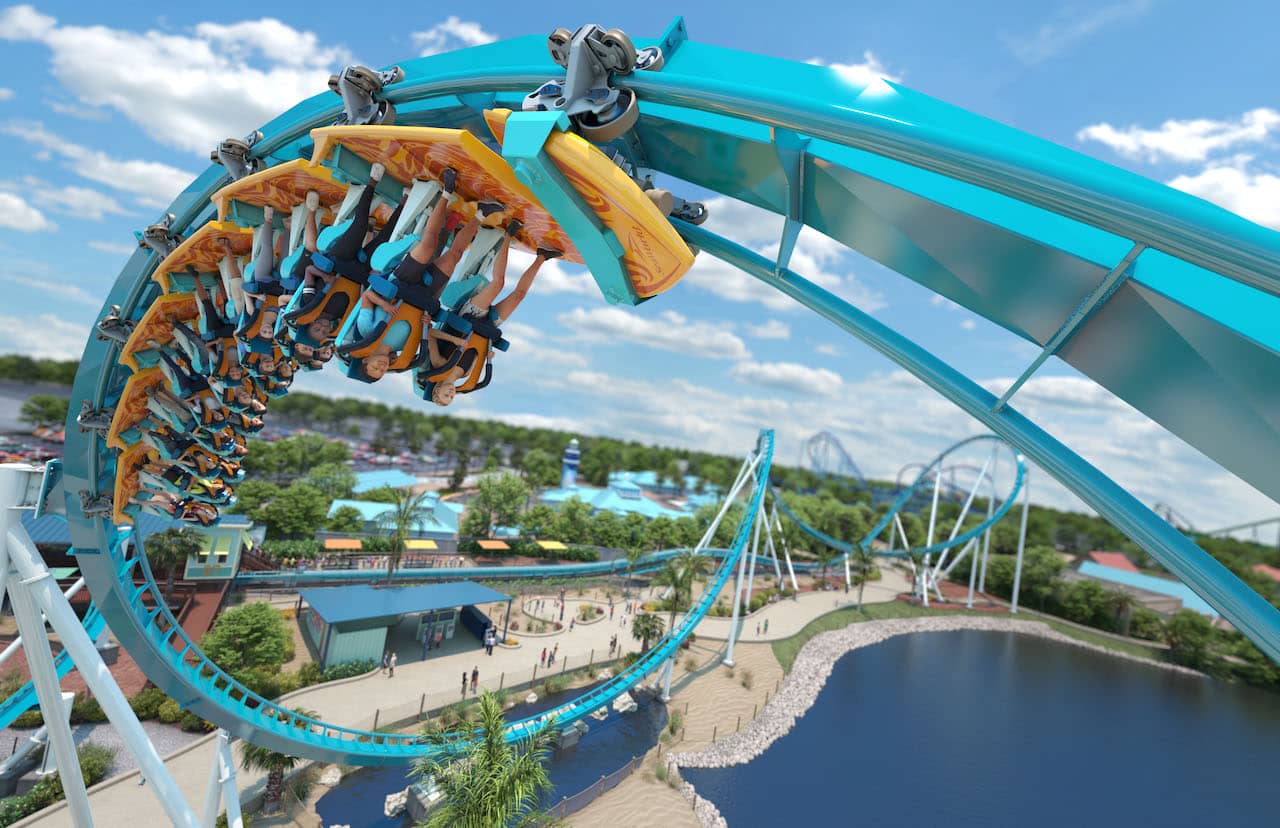 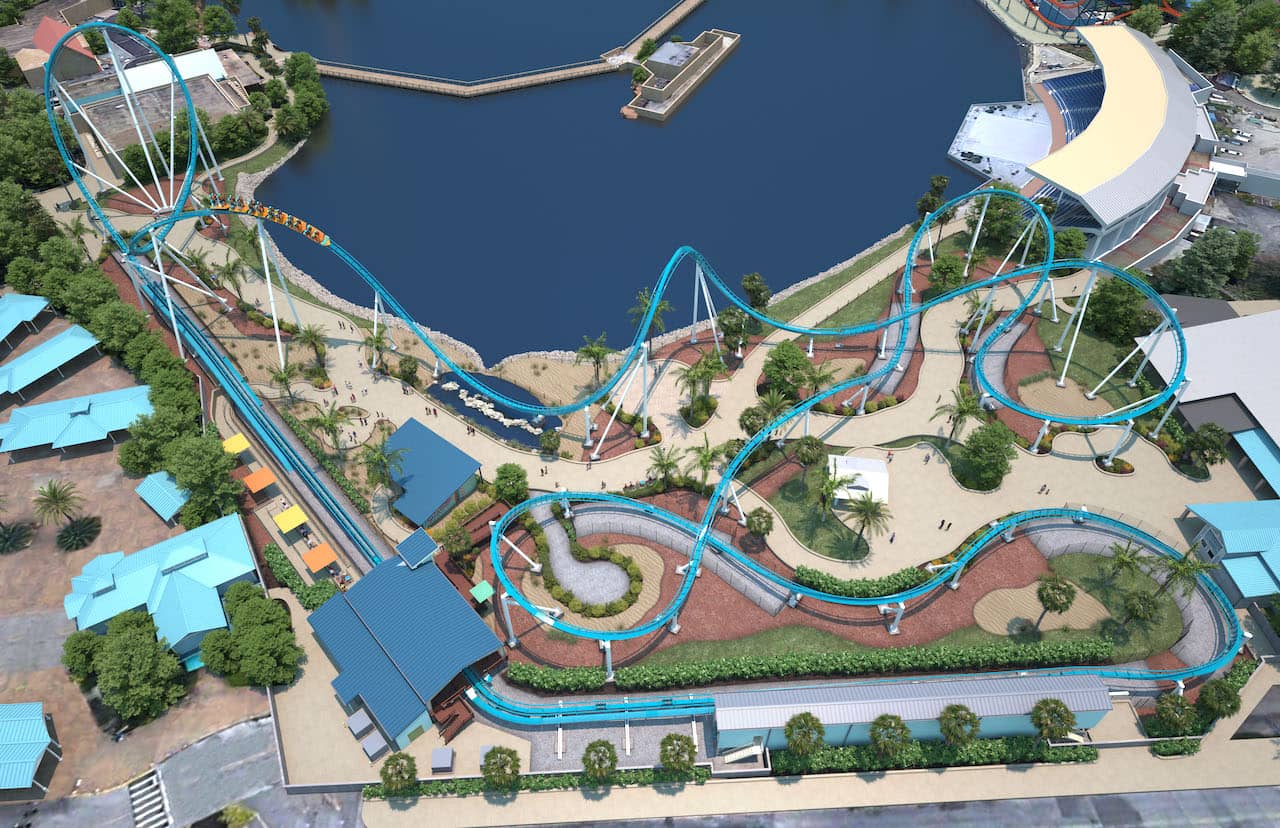 Overview of the coaster's layout

* * *
Like Theme Park Insider? Support us! Get the weekly email, or buy attraction tickets, or just Venmo Robert.

Well...at least it will be better than Ice Breaker haha.

Being a B&M, I think this coaster has potential, and it does offer a unique experience compared to anything else in Orlando. However, I again worry that Sea World is going to skimp on the theming an queue design that will ultimately not make a significant dent in their attendance problems. I certainly hope that Sea World understands that it can't just build a coaster and expect Orlando visitors to simply show up.

As much as B&M lacks innovation where other coaster manufacturers have pushed the boundary, I do really enjoy seeing B&M try something different and create something a little more unique than what they've been doing the past decade or so.

Now if they could just make a standup coaster where my crotch isn't bruised after riding it...

Makes you wonder what SWE paid for this custom design. I mean, who else is going to buy a “surf” coaster? Maybe they did their usual deal and bought 3, if so, we already know where they are going.

It’s being pitched as a thrill, not family ride, but at 110ft high, doesn’t seem much of a thrill to me. Novel idea of motion to simulate riding the waves, but more moving parts = more problems ??

SWO has already teased our pass member preview, so let’s see what 2023 brings.

Must admit, I’m not overly excited about any of the new rides coming to my local parks, and yes that includes Tron. Roll on 2024 …. I suppose LOL. :)

Not thrilled about this personally, and never been a huge fan of stand up coasters in general. After my first visit to Sea World since 2015 this September past, this attraction won't get me back any time soon. Who knows what might come in future years though, and how much competitive heat Epic Universe will put on parks like SW. The new coaster at San Diego Sea World is a great addition, we have one at our Sea World in Australia, and it's a fantastic ride.

Ooohhhh Did anyone else notice the new SeaWorld logo in the video? They are cementing their coaster capital of Orlando in this new version.

I hope they will still be able to set up the Christmastime Village on the paths in this area, because that was really nice.

I really hope this coaster works out too, but I’d be lying if I said I wasn’t nervous about that…

This is about as close to "coaster in a parking lot" as you can get ... literally. The now-typical lack of SW theming will fit like a glove.

Thematically, this coaster will tie-in nicely to the front area of the park. SeaWorld along with Aquatica and Discovery Cove always has been a fun family vacation.

I think the concept video reveals some interesting features of this coaster. The OTSR restraints look very much like those seen on recent dive machines (Emperor, Valravn, Dr. Diabolical, and Yukon Striker), fliers, and Banshee with the vest-style restraints. The part of the system that I find interesting is that guests are in what appear to be more traditional seats, not the bicycle seats commonly seen on stand up coasters, and that the entire system moves up and down while the coaster is in operation. This springiness should really improve rider comfort and enhance the sensations on the coaster as guests can flex their knees in reaction to changing g-forces. This system appears to eliminate the 2 worst parts of the old standup coasters, which was the headbanging from the horseshoe OTSRs and the crotch pain from positive g's driving your groin into a narrow, static bicycle seat.

I don't think this coaster will be revolutionary, but might lead to a renaissance of a coaster type that was abandoned 15 years ago.

Seeing the progress today on Pipeline, and looking over to Ice Breaker .... did SWO miss a trick ??

2 coasters, 1 either side of bay stadium. I pondered the thought, could it possibly have been the mythical Fury 350.

Think about it, the track could have gone into and around the parking lot, ... or out over the lake ... or both.

Damn, did Florida miss out on what could have been the best giga coaster of all time ??

Now that for sure, would have had people booking vacations to visit SWO, and maybe go to Disney/Universal if they had time.

I can dream I suppose.

Did a Bad Choice Doom the SeaWorld/Busch Gardens Parks?