November 12, 2022, 4:52 PM · With all the complaints about Lightning Lane and reservation requirements, how can Disney keep filling its theme parks and making record amounts of money?

Frustrated Disney fans ask that question every time Disney drops another record-setting financial report for its theme parks, as it did again this week. 'If I'm having such a hard time with the parks, why are all these other visitors still coming?,' they ask. A visit to Disneyland on Friday may have provided the answer.

Yesterday was the first official day for the Holidays at Disneyland Resort. Put that on the start of the Veterans Day weekend, and crowds packed Disneyland and Disney California Adventure. There's not much new to report this year with the parks offering the same parades, shows, and holiday overlays as in past years. But Disney hosted a media event Friday morning, nevertheless.

During its media events, Disney runs its invited reporters through a series of interviews with approved park spokespersons, who provide wonderful insight for writers and hosts who are just dropping into the theme park or Disney beats. While I always enjoy connecting with cast members from the parks, it's somewhat rare that these big-press-event interview rotations provide me with any new information or insight that I have not brought to Theme Park Insider readers already. I cover this stuff every day, so I already have the base level of knowledge that most of these interviews provide.

Still, reporters should take nothing for granted. Sometimes, even the people who cover Disney get "surprise and delight" moments, too. Mine came in the middle of my third interview of the day, after I asked the question why fans would consider visiting Disneyland for the holidays.

"When you think about a gift, the best gift you can give anyone is the gift of time," the spokesperson said to me. "Come here and spend the holidays with them."

Yeah, it's a basic answer. But it provided me a lens to see what was happening around me yesterday in much sharper focus. As much as it might confound some of the dedicated theme park fans who read websites such as this one, millions of visitors each year do not come to Disneyland and Walt Disney World to visit a theme park. They might end up on some rides or seeing some shows, but those are not the attractions that draw them to the resorts. For these visitors, Disney simply is the most appealing place that everyone in the family can agree upon for a reunion, a vacation, a get-away... or a holiday celebration.

A trip "to Disney" succeeds not by getting on some huge number of attractions in a day, or by how short average wait times may be. It succeeds if everyone in the family gets to spend time together in a space that makes them feel happy by the end of the day. 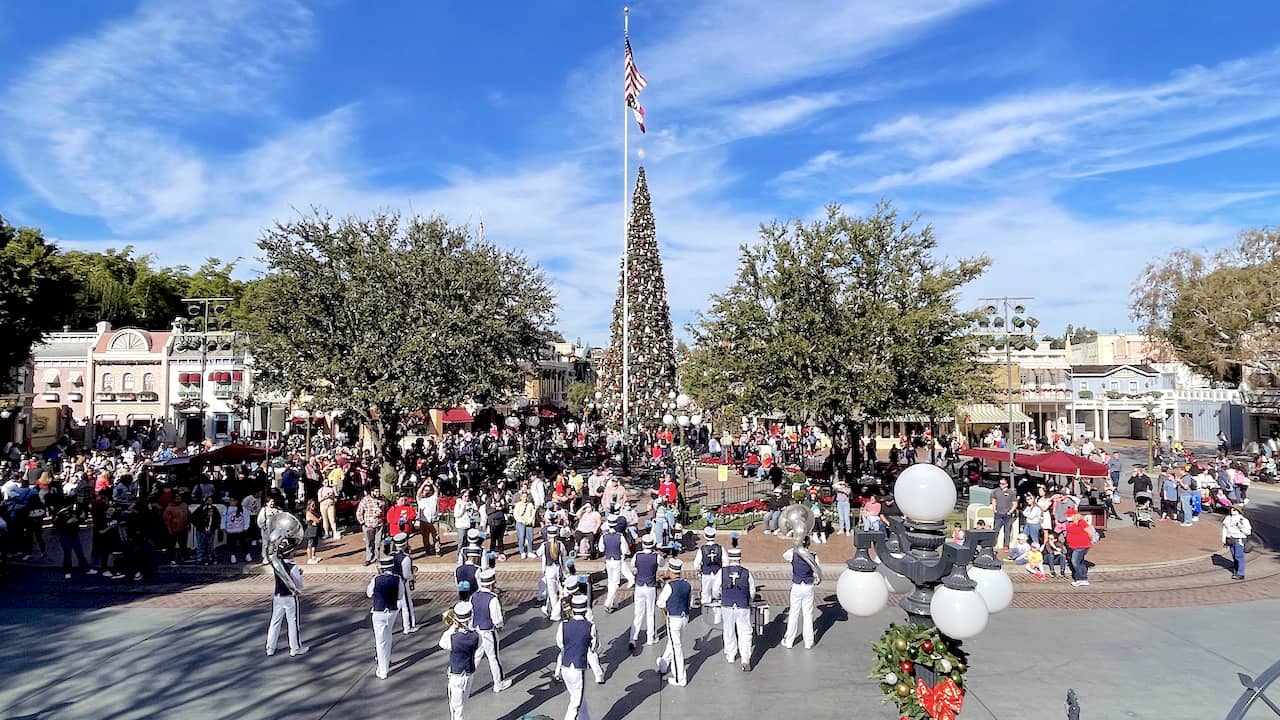 Disneyland has become a beloved holiday tradition for countless Southern California families because it continues to do just that. The show-draped Sleeping Beauty Castle or Town Square Christmas tree provides the backdrop for thousands of local families' portraits and holiday cards each year. If the goal is quality time together, does it matter if you are spending that sitting on a blanket on Main Street waiting for the A Christmas Fantasy parade or waiting in the queue for Haunted Mansion Holiday? Or waiting in a queue for anything else? It's the time together that matters, not the "attractions experienced" count that results.

Let's be clear here. The wait times at Disneyland yesterday would frustrate many theme park fans. More than an hour for Big Thunder Mountain. Two hours for Mansion. And nearly three for Rise of the Resistance. Disney's upcharge Lightning Lanes provides some relief, but nowhere near the "no wait" experience that many fans expect from line-skipping passes. In early afternoon, the Lightning Lane for Mansion stretched back to Splash Mountain. The Lightning Lane entry for Rise of the Resistance stood closer to the Black Spire Outpost marketplace than to the attraction entrance itself.

The waits weren't just for attractions, either. One queue for Disneyland's music box-themed holiday popcorn bucket extended from the Frontierland popcorn stand down the banks of the Rivers of America past Pirates of the Caribbean. Spending time with the family waiting to buy popcorn buckets that you will flip on eBay to help pay for Christmas might not be my family's holiday tradition, but clearly it is now some families'.

And that's another part of Disney's theme park success - casting a wide net to try to accommodate many families and many traditions. Disney still believes in the mass market. But unlike many other entertainment companies, Disney understands that the "mass market" always has been a collection of individuals, with distinct backgrounds, traditions, and preferences. In an era when consumers have boundless choices, you cannot build a mass market for your product by speaking with a single voice, delivering a single message.

Disney does not cast its holiday celebrations narrowly to appeal mostly to a nostalgic white, American, Christian audience, as some other parks do. Disney California Adventure's "Festival of Holidays" is as advertised - a festival of many year-end celebrations, from Thanksgiving to Christmas/Navidad to Hanukkah to Diwali to Kwanzaa to Three Kings Day.

For your ears and eyes, Disney California Adventure has programmed musical artists performing from a range of genres, including Tina and The Sounds of Celebration, Mariachi Divas, Mostly Kosher, Blue13 Dance Company, Phat Cat Swinger and The Mistletoes. For your mouths and stomachs, Disneyland has brought back its festival marketplaces and special holiday menus, too. Want a turkey and stuffing sandwich, dressed with cranberry sauce? Disney has that. But Disney also will serve a Brisket Slider, Chicken Tikka Masala, Pozole Dip Torta, or Peri-Peri Chicken for you to enjoy a taste of the holidays. 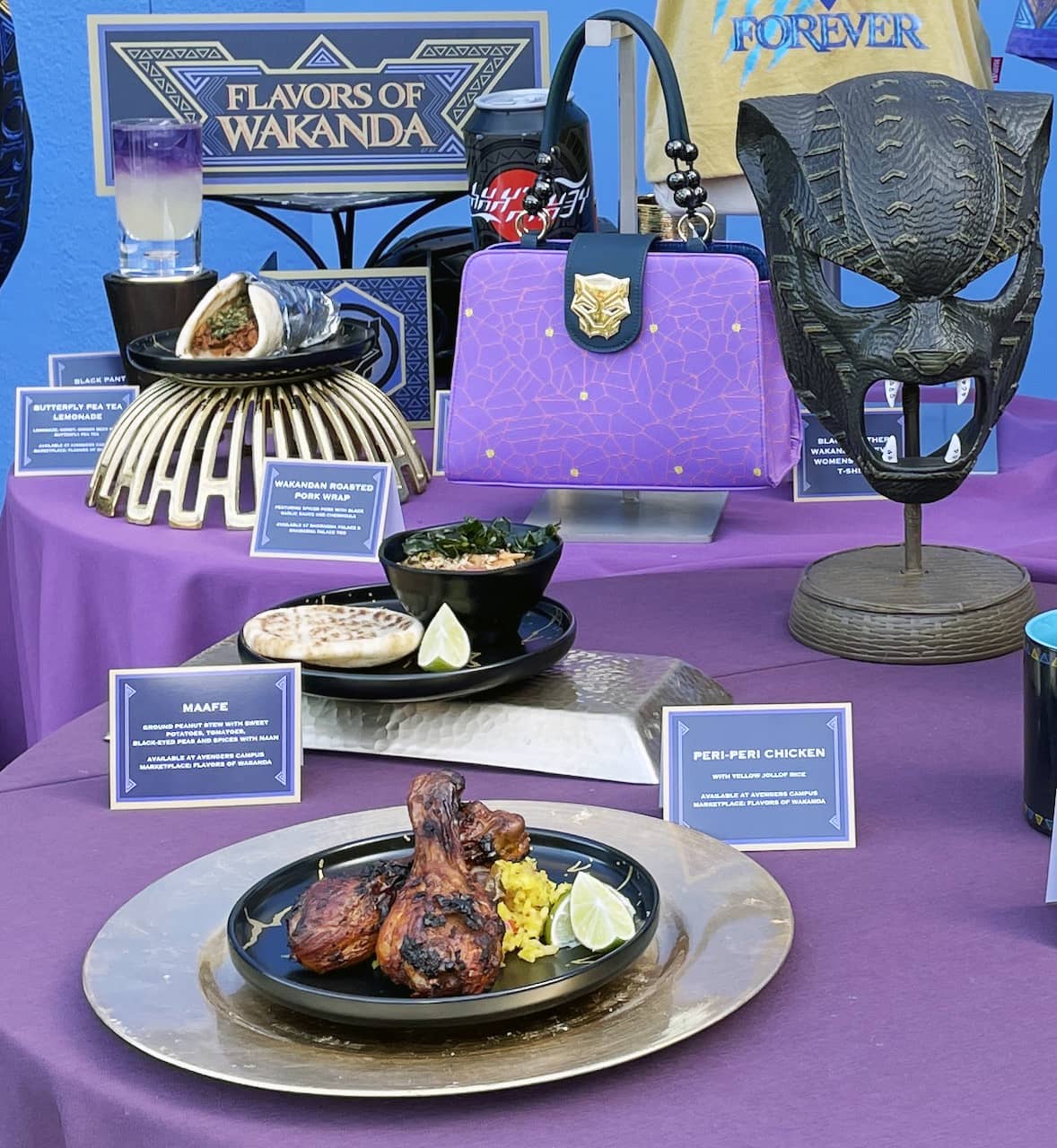 Peri-Peri Chicken ($9), bottom, among the Black Panther-themed food and merchandise available for a limited time at Disney California Adventure

That last option is on the menu at the "Flavors of Wakanda" kiosk in Hollywood Land, celebrating the release yesterday of Disney's "Black Panther: Wakanda Forever." If your family's holiday tradition is movies, Disneyland has you covered there, too, with a celebration of its latest Marvel spectacular. In addition to the African-inspired bites, Disney California Adventure has set up a "Wakanda Forever" photo op in the Hyperion Theater courtyard, as well as a daily character moment with the new Black Panther atop the Avengers Headquarters.

Furthering its diverse appeals to a wide audience, for the 25th anniversary of It's a Small World Holiday, Disneyland yesterday introduced to the ride a new character doll, who uses a wheelchair. 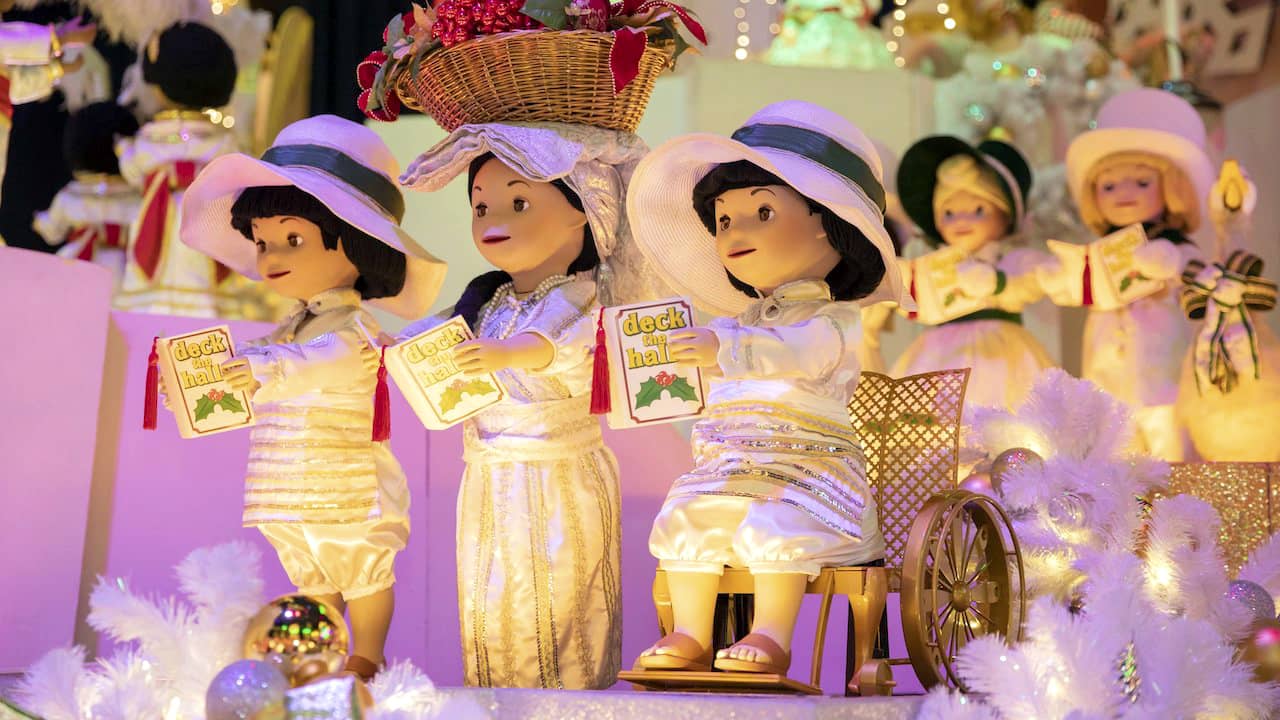 If you walk through Disneyland and Disney California Adventure, the odds grow better each season that you will find something within them that reflects you, your background, and your dreams. That said, getting into those parks remains a challenge for many.

From my experience, many Southern Californians are aware that you now need an advance reservation to get into a Disneyland theme park on a specific date. But far fewer understand just how far in advance you need to make that reservation to get the date you want. If you want to book a Friday or Saturday, you'd better reserve more than a week in advance. (Here is Disneyland's current availability calendar.)

You no longer can buy annual passes, either, cutting off one of the old sources of affordable Disneyland tickets to those who did not buy a new Magic Key pass when they were available. But for a special day with the family, Disneyland still delivers value for many. In addition to the parks' regular attraction line-ups, Disney continues to offer holiday overlays on Haunted Mansion and It's a Small World in Disneyland, plus for Mater's Junkyard Jamboree and Luigi's Rollickin' Roadsters in California Adventure's Cars Land. The A Christmas Fantasy parade and Believe... In Holiday Magic fireworks still are running at Disneyland, joined by World of Color - Season of Light playing at California Adventure, where the Disney ¡Viva Navidad! street party also runs during the day. Throw in all that live music from those guest artists listed above and the abundant decoration and holiday food and merchandise (including, yes, those popcorn buckets), and there will be plenty for any family to do on the holiday at Disneyland, even if they can't possibly hope to get to it all.

So, for all these reasons, Disneyland continues to thrive, especially at the holidays, even as it frustrates some of its long-time fans.

* * *
The Holidays at Disneyland Resort event runs through January 8, 2023. For discounts on multi-day tickets to the Disneyland theme parks, please visit our partner's Disneyland tickets page.

Strange article. It seems to be promoting Disney's many assets, but at the same time describing the exact things that are ruining the Disney vibe. It's almost like satire, you're winking at us, telling us all the great things Disney does while admitting Chapek is sticking his thumbs in our eyes.

Yes, many of us were raised on Disney so we keep going back for a little taste of that drug. But the dealer knows we're hooked so he's started taking advantage of us. Things that were free now cost big; guests must do the work cast members previously performed; lines we know can be shorter are made purposefully longer to cash in. To paraphrase Russell's excellent comment, Chapek and his Board are on pace to wipe out 100 years of goodwill in a decade.

The new slogan is Happiest Place on Earth, you pathetic suckers!

A great trip, I will go there during winter break this year.

Disney is still living on its goodwill and demand from people who couldn't visit because of covid but it won't last.

There is not a hope in hell I would pay the entrance fee to stand on an hour long queue to buy a bucket of popcorn.

I think this was perhaps true 5+ years ago, but it's not the case anymore. With all the planning and hassle it takes to visit Disney parks now, they're not an ideal location for a family gathering. I think families have been going to the parks recently in the hopes of them being good places to enjoy time with the family. Unfortunately, if you read recent comments on fan sites and other feedback blogs, families are growing increasingly frustrated with the experience. Guests are paying more for less, having to jump through more hoops just to visit the parks, getting nickel and dimed for parts of their trip that used to be included in the cost of admission, and finding parks just as (if not more) crowded than they were on previous visits (pre-pandemic). The constant lowering of expectation by Disney while charging guests more for that diminished experience is NOT offset by the extra seasonal offerings, and guests are quickly starting to see through the wool that's being pulled over their eyes. Disney is still experiencing some revenge travel, and are always going to be able to pull guests for that once in a lifetime visit. However, their core audience of guests that visit every year or every 2-3 years is starting to make their voices heard. DVC occupancy rates are down, and the secondary market for DVC points is saturated with listings (best measure of core audience engagement). If Disney was so confident that demand would continue to increase, they would be looking to expand or more dramatically limit attendance to improve the guest experience so they wouldn't need to lower expectations.