In the modern entertainment business, hits demand sequels. But if you're the insider charged with making that sequel, what do you do? Do you lean in and double down on what made the original a success, or do you take advantage of the audience's faith in your emerging franchise and take it in a new, fresh direction?

With Mickey & Minnie's Runaway Railway, Disney has opted for a little bit of both.

Mickey and Minnie won't have to travel far to work this installation of their first-ever dark ride. It's located just down the street from their homes in Disneyland's (still closed for renovation) Toontown, in the previously-unknown-to-humans El Capitoon Theater. 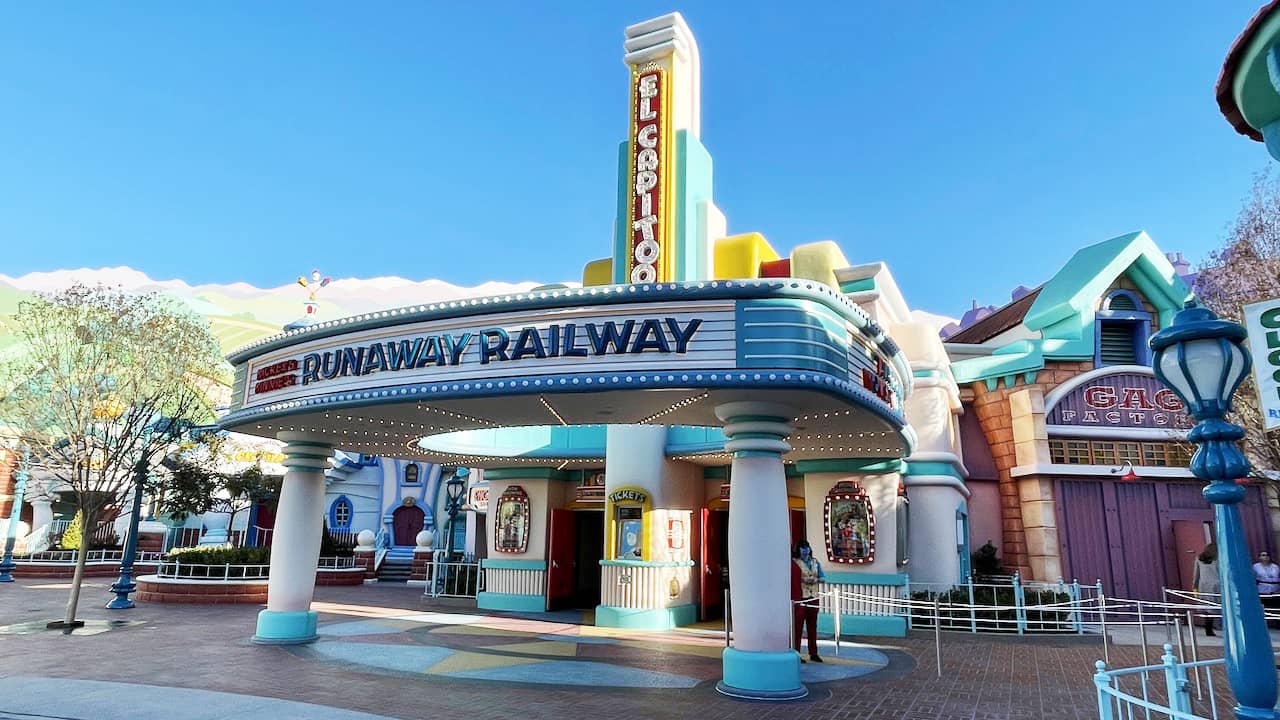 And that's where Walt Disney Imagineering has taken Runaway Railway in a different direction. In Disney's Hollywood Studios at Walt Disney World, Runaway Railway plays in the Chinese Theater, which purportedly is hosting the premiere of "Perfect Picnic," the new animated short film starring Disney's First Couple. A handsome, but humdrum, queue leads Disney World visitors into their screening rooms, where all heck breaks loose and they enter the toon world.

At Disneyland, you're in that toon world as soon as you cross under the Disneyland Railroad tracks into Mickey's Toontown. The theater hosting the west-coast premiere of "Perfect Picnic" is Toontown's own neighborhood theater. And Disney has taken advantage of this setting by creating an immersive walk-through queue for Runaway Railway that doubles as an attraction of its own.

The conceit here recalls the trope many of us first saw in the end credits of "A Bug's Life," which presented "outtakes" from the Pixar animated film. We are asked to pretend that cartoons stars are actors from some animated dimension in the multiverse, where Disney's Nine Old Men were nothing more than Walt's golfing buddies as the toons themselves acted their own parts, working on their "real" sets, with "real" props. 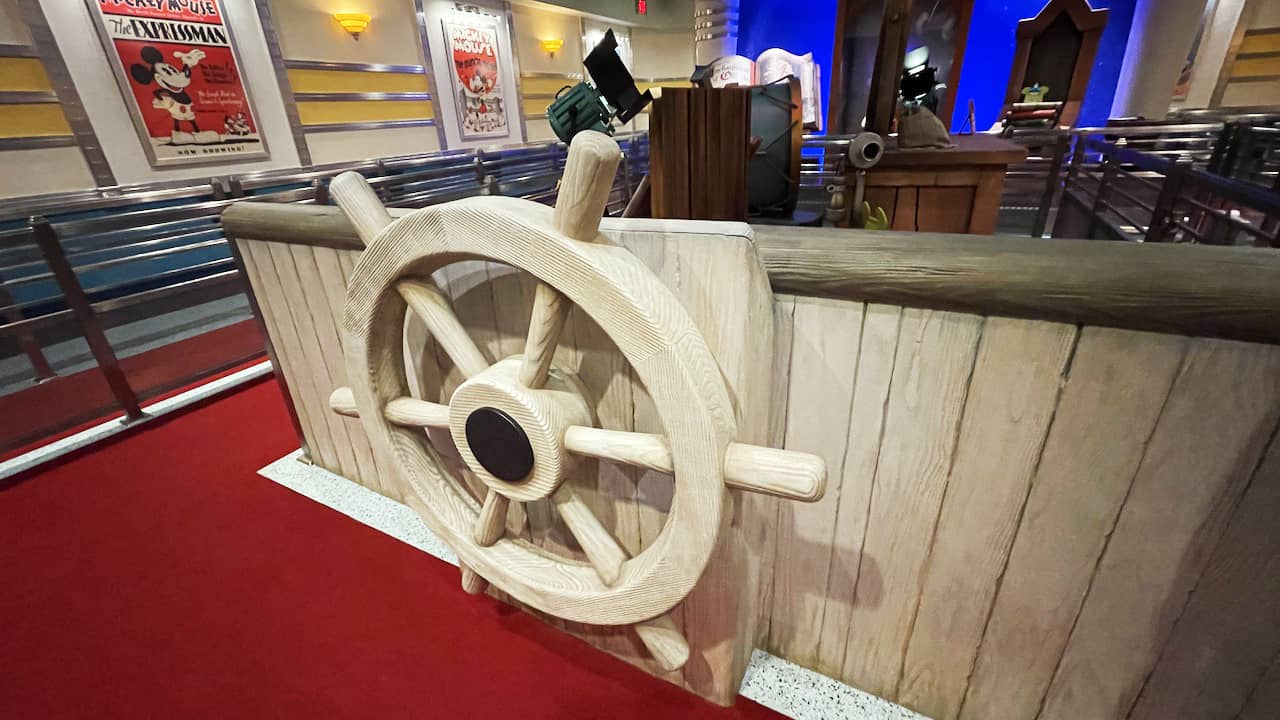 The "real" wheel from Steamboat Willie

We see a curated collection of those props in the El Capitoon queue, where the Toontown Hysterical Society, under the direction of Minnie Mouse, has installed a retrospective on Mickey's career - from Plane Craze and Steamboat Willie to Mickey and the Roadster Racers. 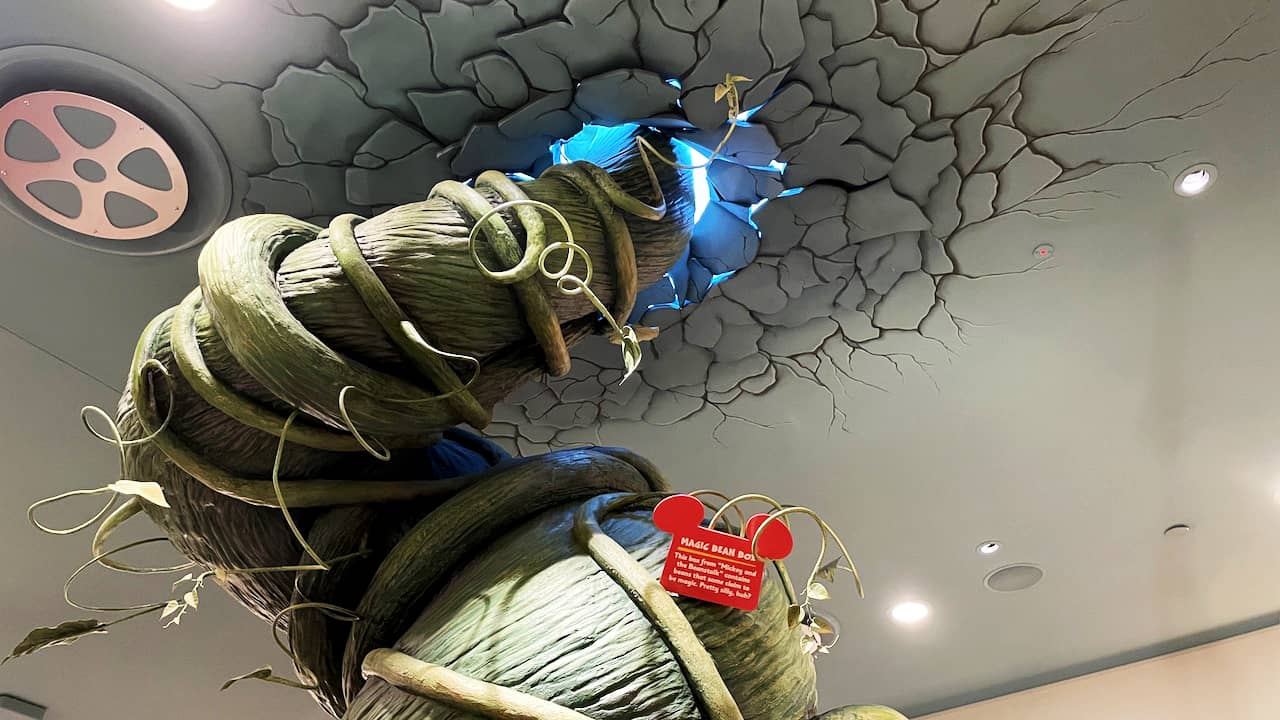 With this, WDI doubles down on the "toon rules" that gave the original Florida installation of Runaway Railway its infectious energy. Movie posters line the halls of the El Capitoon, expect here they are of Toontown animated versions of Disney's live-action originals (in a welcome moment of mocking self-awareness from Disney). Ghosts inhabit mirrors, beanstalks crash through ceilings, and a concession stand offers plenty of gags that have nothing to do with eating your food too fast. 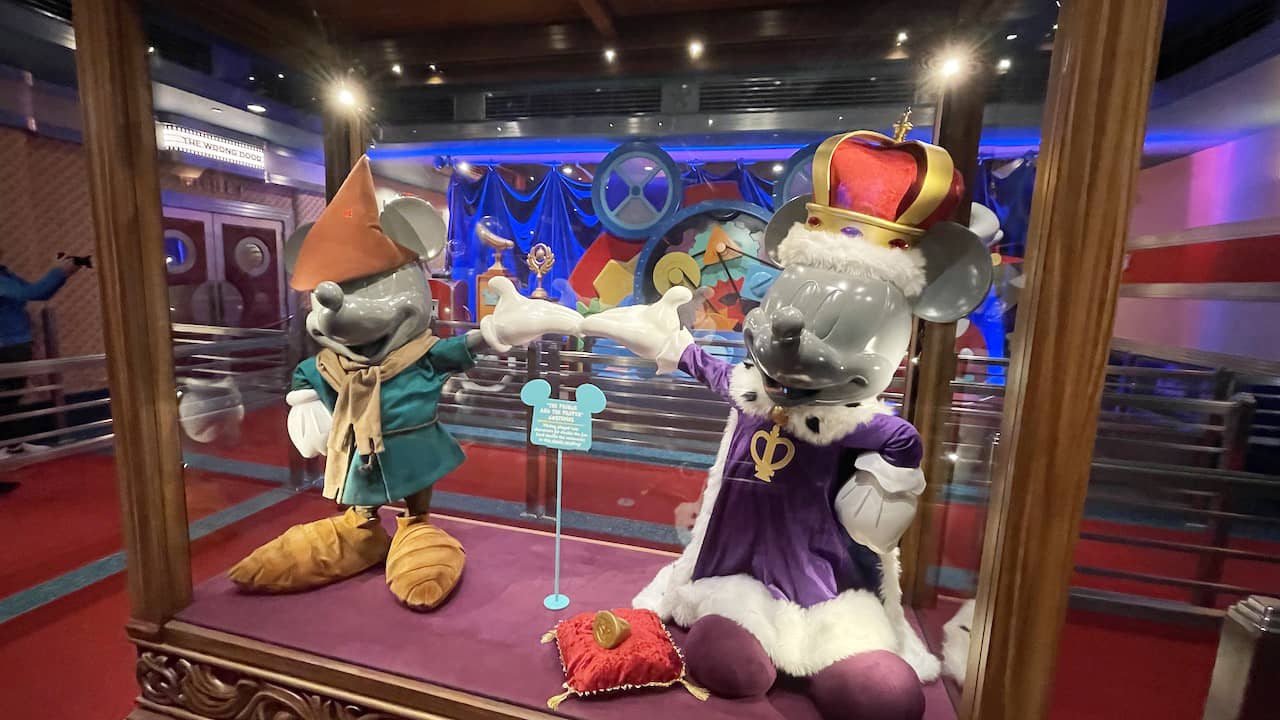 Senior Creative Director Jonathan Friday walked us through the queue this morning. The video concludes with the pre-show and full on-ride POV of Runaway Railway, so - obviously - spoilers. But feel free to pause and note details in the queue and just skip the ride part if you'd like.

Disney has done such an impressive job of immersing us in this cartoon world that they've actually undercut what was the most impressive moment in the original Runaway Railway installation - that moment when we crossed from the human to the toon world.

Here, since we're already immersed that toon world, the moment seems a bit superfluous. If anything, it's just yet another gag in a theater filled with them. But it does all us to move from audience to participant in the toon world, as we board Goofy's train and set off for a day where "nothing can stop us now" even as everything that can go wrong along the way, does.

As I wrote in my review of the original installation of Runaway Railway at Walt Disney World's Disney's Hollywood Studios:

"No attraction in theme park history more enthusiastically embraces the trope of 'and then everything goes terribly wrong' than Runaway Railway. The show begins with a Mickey short entitled 'Perfect Picnic,' in which Mickey and Minnie sing about their upcoming day in the park, when nothing can wrong and nothing can stop them now.

"So of course you know what's coming next. That they've chosen Goofy to drive the train that will take us along to their 'perfect picnic' only seals our fate."

Disney's selection of a trackless ride vehicle reinforces the cartoon logic of Runaway Railway, where anything and everything can - and will - happen next, with no established track to guide your way.

Except for the rule that it's all gotta be fun. And nothing, not even cartoon rules, can stop that.

Mickey & Minnie's Runaway Railway opens to the public on Friday. A virtual queue assignment will be required. The rest of the reimagined Mickey's Toontown opens March 8.

I missed adding this before, but when you are on the ride - perhaps for a repeat visit - try to watch Pluto's story from the preshow through each scene. It's well worth the effort.

And I wanted to close with a photo of a moment that many fans will miss on Runaway Railway... because few people turn around and look at the exit of a ride. 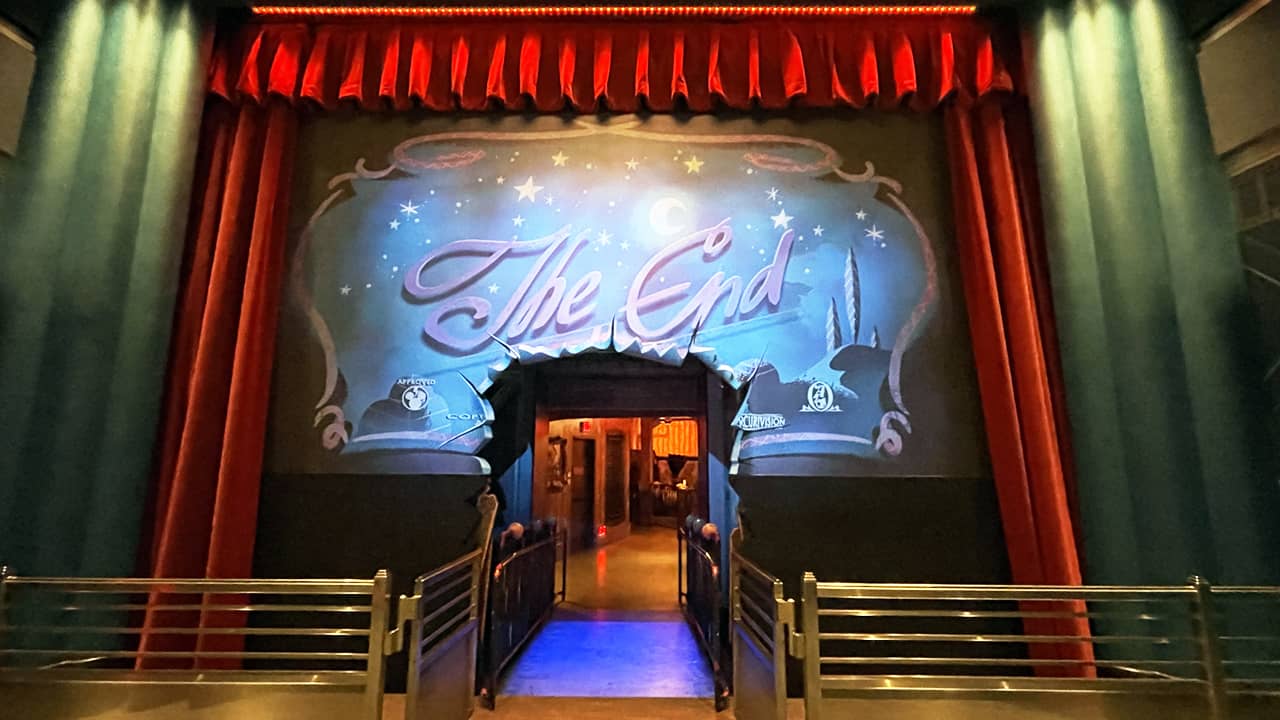 Nice callback to the pre-show, right?

For discounted multi-day tickets to the parks, including a three-day local resident deal, please visit our partner's Disneyland tickets page.

It is fitting that Mickey is treated like an actor here. After all, just like any Hollywood star, he got a facelift in 1939.

As it happens, joining my sister and her family for a trip in early March just in time for reopened Toontown so looking forward to this.

I've never been a big fan of Toontown and found it strange that such a large chunk of Disneyland was themed to a weird movie that isn't really "Disney" (I mean, obviously it is a Disney movie, but for three decades it was the only land at Disneyland themed to one IP and it is a character that is not popular and definitely does not give off Disney vibes). If I remember correctly the "Toontown Fair" at MK didn't have any mention of Roger Rabit in it at all and was just basically a low budget area where you could meet the characters and of course had the Vekoma roller skater as well themed to Goofy instead of Roger Rabit. Toontown was a stereotypical Eisner idea that just outlived its useful life and stayed around way too long.

That being said this is attraction is a fantastic addition to DLR and they did a really good job customizing it to fit the surroundings. If they weren't going to bulldoze the whole area and start fresh, this is the next best thing.

It's interesting how understated the entrance to this attraction is compared to its surroundings. It looked somewhat minimalistic from the concept drawings, but in real life it looks even more inconspicuous. I'm sure the lighting will help draw more visual interest to the attraction, particularly at night (though I've heard the attraction will close early on fireworks nights), but I think it's an interesting design decision to make this entrance so unassuming compared to the original, which is housed within DHS's icon/weenie.