Revenge of the Mummy 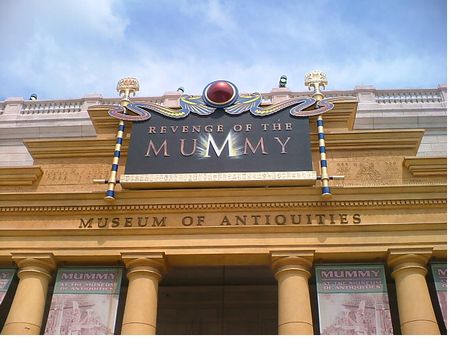 You're on the set of a Brendan Fraser Mummy movie, where some crew members believe the script's "Curse of the Mummy" is all too real. Many of them wear the symbol of the Med-Jai, warriors who protect "the Creature'" from being found and raised from the dead. After getting this backstory in the queue, you're on to the ride, a roller coaster through what's supposedly a movie set of an ancient Egyptian tomb.

Once on board, you learn that all these mummies aren't just props -- they're other tourists who have been captured and mummified in this very real Mummy's lair. As you turn a corner, a partially wrapped crew member warns you to get out, but it's too late. The Mummy Imhotep appears and makes us an offer we can't refuse: Join him and receive vast riches, or refuse and face doom. Guess which one we're going to get? Hint: not the money. From there, you launch into a high-speed roller coaster ride through the tomb on the way to your escape. And just when you think that the ride is finally over... it isn't.

Reviews of Revenge of the Mummy

Still love this ride. Great theming and a great rush!

I think this is the best ride at USF. To me it is the prototype for a perfect right. Phenomenal theming and big time thrills. 2 of the moments on the ride would rank among my favorite moments in any ride I've ever ridden. One of the greats.

This ride has a bit of everything...one of my top 3 rides between both parks.

Still my favorite attraction at Universal Studios Orlando, and second only to Spider-Man at the resort. I love the theme, the varied coaster elements, the attention to detail, and the overall ride experience itself. I am sure it is only a matter of time before Universal remakes this fantastic coaster into Hermione's Sunday Stroll, but for now it is still a must visit and a far better experience than watching singing frogs with the rest of the prancing masses.