Universal released the titles and details for six original-IP houses, the fives scare zones, and the two shows that will join the four haunted houses that Universal announced previously. Here is what Halloween Horror Nights visitors in Orlando can expect, starting next month.

Spirits of the Coven - Guests become main ingredient of witch’s brew in a 1920s speakeasy.

Fiesta de Chupacabras - The no-longer mythical, fanged creature is here to get you.

Hellblock Horror - It's a prison for monsters and you are here to visit... and, one hopes, live to tell about it.

Descendants of Destruction - Enter a post-apocalyptic subway system and say hello too the bloodthirsty mutants living there. 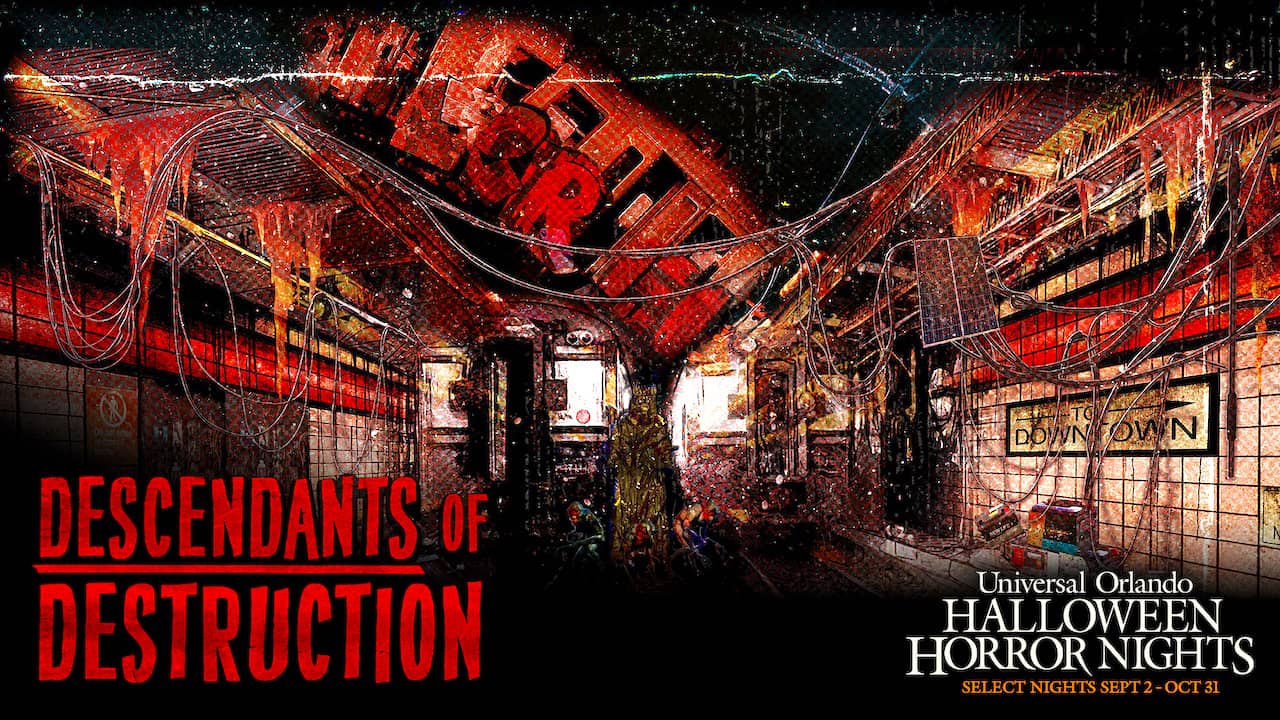 Horrors of Halloween - Try to escape the Pumpkin Lord and his subjects.

Scarecrow: Cursed Soil - Scarecrows are here to harvest your souls.

Conjure the Dark - An evil sorceress commands an army of ravenous monstrosities.

Ghoulish! A Halloween Tale - a new lagoon show, this time following the Grim Reaper and set to remixed hits. (This apparently replaces the Marathon of Mayhem show.)

In addition, the Halloween Horror Nights Tribute Store will be opening later this month in Universal Studios Florida, featuring rooms themed to Pumpkin Patch, Cemetery, and Witch's Cottage, with a final room themed to the adjacent Sweet Revenge scare zone.

Over at Universal's Cabana Bay Beach Resort, the "Universal Monsters Gallery of Legends" will be taking over the pop-up spot that previously featured Jack and, before that, Stranger Things. The photo op - this year featuring The Mummy, The Wolf Man, and Dracula - is open on HHN evenings to all Universal Orlando hotel guests.

Pretty disappointed that Universal was unable to secure a license for Stranger Things. The original mazes and scare zones sound cool, but I do enjoy seeing how UC works existing IP into a maze and the accuracy of their sets that have to hold up to hours of guests walking through 5 nights a week and close inspection.

Blumhouse and Halloween are the only movie-IP houses this year, and Halloween is typically just a collection of Michael Myers jump scares. I am very interested in The Weeknd house this year, but I can't recall Universal ever leaning so hard on original IP.

I guess other studios just didn't want to license stuff this year for the rates that Universal wanted to pay?

I saw some chatter making the rounds on Reddit that there was supposed to be a house based on the upcoming Evil Dead Rise. But with all the recent drama going on at Warner Bros. that could delay that film, the license was dropped and is now one of the originals.

I am beginning to want Comcast/NBCUniversal to buy Warner Bros. and rescue it from Discovery.

Bugs: Eaten Alive....(sigh) as an owner of arachnids, this house is going to do nothing to improve society's view of spiders, lol

I'm a little surprised we haven't gotten a similar maze-dump from Hollywood. My sense is they've had a similar IP-problem (IProblem?) out there and are just biding their time before announcing what they have left. We know about the Scarecrow maze and it appears La Llorona and Killer Klowns is making a comeback. That leaves the rumored, "Old Hollywood" house to round out the eight mazes.

Of course, it could be the Terror Tram holding things back -- but that's been such a hodge-podge of a theme in years past that my sense has been they're just throwing something together this year. Or, uh, teaming up with Chucky again.

This will be my fourth time going to HHN and every year I've gone my favorite house has been an original so I'm pretty happy about this line up.